The people of Montevideo, Uruguay’s charismatic capital city, are rightly proud of the Rambla, the 14-mile promenade that runs alongside the mighty River Plate and, as it happens, has the world’s longest continuous pavement.

So imagine the dismay in 2012 when, on a pleasing stretch of the city’s most famous thoroughfare, the authorities built a gigantic statue of a naked Korean man.

Worse, the man is bowing towards the river, which means that his vast bare bottom is pointing directly at a primary school. Bemused Montevideans wanted to know why, and eventually government officials coyly admitted they had quietly leased their own waters to South Korea, for fishing purposes. The Korean gent is bowing to say thank you.

There was no real hoo-ha about this. Uruguayans conceded they might as well cash in because they eat very little fish.

A couple of hundred miles upriver from Montevideo lies the town of Fray Bentos, synonymous in my Seventies youth with tinned steak-and-kidney pies.

Like much of South America, except more so, Uruguay (properly pronounced with an oo-sound, by the way, they laugh at us for starting with a Y) is no place for non-carnivores. Though it scarcely seems possible, the Uruguayans consume more beef per capita than the neighbouring Argentines. It is a national boast.

‘We celebrate any way we beat Argentina, even eating beef,’ Luis, our guide in Montevideo, told us. ‘Argentina is 16 times bigger than Uruguay, and Brazil is 48 times bigger. We are tiny between giants, desperate to assert our own identity.’

Happily, Uruguay and its people have oodles of identity, and character. I have never been to a country with which I was so instantly smitten. No Nazi war criminals fled to Uruguay, as they did to Argentina and Brazil, because there was no place to hide. ‘Partly because everyone gossips,’ said Luis. But also, because Uruguayans have always had a strong social conscience. Maternity-leave legislation was passed as long ago as 1906, for example.

A year later, divorce was legalised. And women were given the vote in 1917, before they did in the UK. Today, the government gives a computer to every school child, and to everyone on retirement.

However, let no one accuse the Uruguayans of being goody-goodies. They also know how to have fun, not least at Montevideo’s gloriously named Bar Fun Fun, where locals rather than tourists congregate. We’d been advised to go there for authentic tango. Buenos Aires ‘is the oven in which the tango was cooked, but the ingredients are Uruguayan,’ Luis told us solemnly.

At the Bar Fun Fun, my wife hailed a man dressed all in black and ordered a bottle of Uvita, the sweet local wine. He smiled and pointed out the barman. He was the singer, and was soon crooning his heart out to sporadic bursts of wild applause.

The only words we recognised were English — one song ended with a plaintive ‘perhaps, perhaps, perhaps’ — but we clapped and hooted, too. Then the tango dancers came on, a sleek raven-haired couple who performed with extraordinary, seductive intensity on a stage smaller than a table-tennis table. The wall behind them was festooned with football scarves. 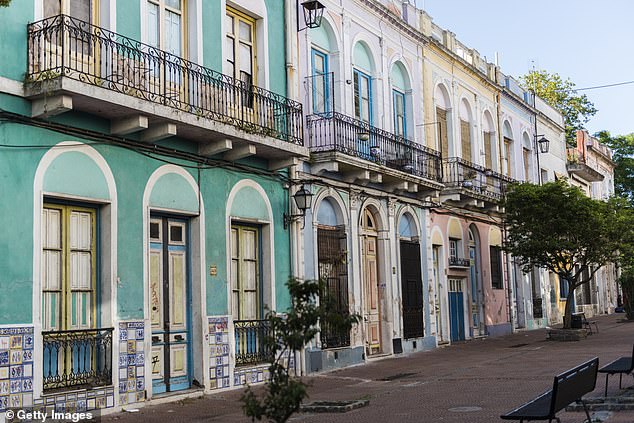 Football is more of a religion than Catholicism. Uruguay is the only Latin American country where abortion is legal, and the Church does not play a major role in society. Where beating Argentina 4-2 in the inaugural World Cup final, staged in Montevideo in 1930, is still a bottomless source of collective pride.

Luis took us to see the ramshackle national stadium, purpose-built for that final. It is a place of worship. The country’s best-known footballer, Barcelona striker Luis Suarez, is everyone’s idol.

When he was banned for biting an opponent and the rest of the world recoiled, Uruguayans cheered. ‘We’re so tiny that we have to win however we can,’ said Luis. ‘If that means biting, we’re happy.’ By European standards, Uruguay is not small at all. The population is only 3.5million, but the country is twice the size of Portugal, and it took us a three-hour bus ride through flat countryside — Uruguay is South America’s answer to Norfolk — to get to Colonia del Sacramento, the country’s oldest, prettiest town, established by the Portuguese in 1680.

From there we were due to take the hour-long ferry ride to Buenos Aires, 35 miles across the River Plate, its skyscrapers dimly visible. But first we had a day and a night to explore, a hugely rewarding exercise because Colonia’s cobbled streets ooze not just history but beguiling contentment.

We were staying in the heart of the old town just off the Calle de los Suspiros, which means ‘street of sighs’, and one can only wonder why, because centuries ago it was the location of Colonia’s brothel.

Today, lined with 400-year- old terracotta houses, it is impossibly pretty and top of every tourist’s must-see list.

We rented bikes and cycled to the beach, actually overtaking one of the many vintage cars that imbue the country’s roads with added charm.

And we visited Colonia’s disused bullring, built by the British and opened with terrific fanfare in 1910.

Locals say it has lasted so long because of British engineering expertise, because it hasn’t been used since 1912, when it was closed after a presidential decree banning bull-fighting.

Somehow, that seems typical of Uruguay. Many South American countries resound with thunderous patriotic pride. But I can’t think of anywhere where it seems more justified.