On the fiftieth anniversary of Ted Kennedy’s car crash on Chappaquiddick Island, a mysterious letter claims to reveal the true story of what occurred on July 18, 1969.

The new evidence was uncovered by People for a podcast, Cover-Up, about the incident that likely ended the Massachusetts senator’s presidential ambitions.

Mary Jo Kopechne was found dead at age 28 in Kennedy’s submerged car after he waited some 10 hours to report the crash. Last year her family received a letter from a man who said he had spoken with a witness.

The information in the letter contradicts Kennedy’s story, which was that he had been driving Kopechne to the ferry, made a wrong turn and went off a bridge into a tidal pond, and was too disoriented and in shock to call police immediately. 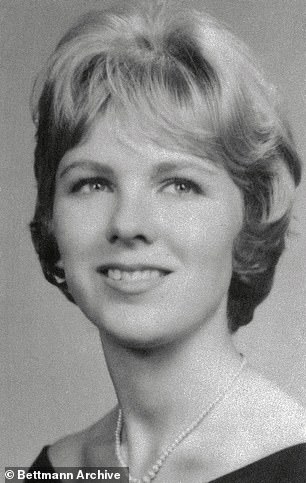 On the 50th anniversary of the Chappaquiddick incident, a new letter claims to tell the true story of the crash. Pictured: Ted Kennedy and Mary Jo Kopechne 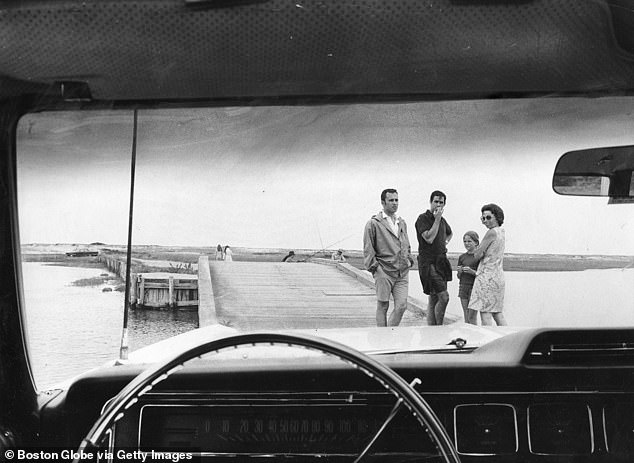 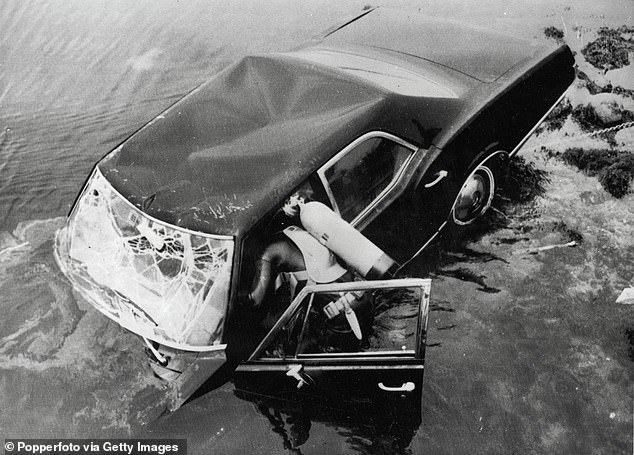 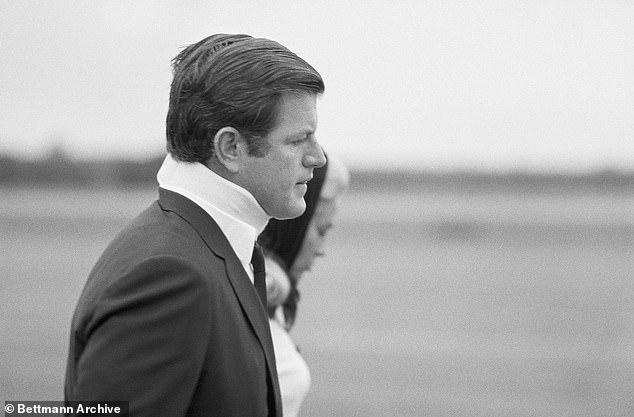 The crash occurred near midnight, following a party in a rented cottage on the island, accessible only by ferry from Martha’s Vineyard.

In attendance at the party were six women, including Kopechne, who had worked together for Robert F. Kennedy’s 1968 presidential campaign.

They were known as the ‘Boiler Room Girls’ for the windowless office they had worked in on the campaign.

In the letter, the man said that his wife was friends with one of the Boiler Room Girls, and that the three of them had eaten lunch together years earlier.

At the lunch, the man said the woman, whom he referred to only by the pseudonym Betty, described how Kopechne had too much to drink at the party and wanted to lie down. 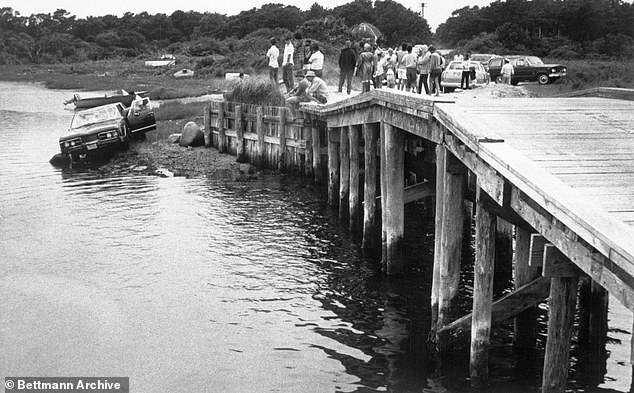 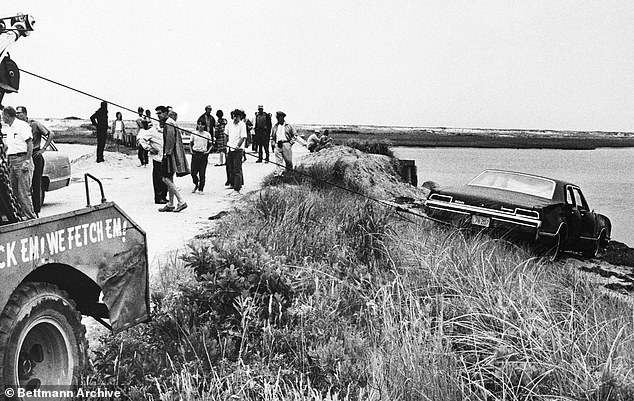 A tow truck pulls Senator Edward Kennedy’s car out of Poucha Pond after the Senator’s infamous accident on Chappaquiddick Island.

Betty said that she helped Kopechne lie down to rest in the back seat of Ted Kennedy’s car, and then returned to the cottage where she too fell asleep.

The letter said that some time later, Kennedy and another of the Boiler Room Girls went for a drive in the car, unaware that Kopechne was in the back seat.

When the car went over the bridge, Kennedy and his female passenger walked back to the cottage, about a mile away, still unaware that Kopechne was in the car, according to Betty.

Betty claimed that nobody realized Kopechne was missing until she woke up the next morning, heard about the crash, and told the other party guests that Kopechne had been asleep in the car.

Then, she said, ‘the Kennedy damage control machine kicked in and informed the shocked senator,’ according to the letter.

At the inquest, a rescue diver testified that he believed Kopechne survived the crash and was alive for several hours inside the submerged car, due to the position of her body with her face pressed into a small air pocket.

The diver found Kopechne in the right rear seat of the vehicle, with her face pressed into the foot-well, where an air bubble may have formed in the overturned vehicle.

The diver believes Kopechne died when her oxygen ran out, rather than drowning, but no autopsy was ever performed. 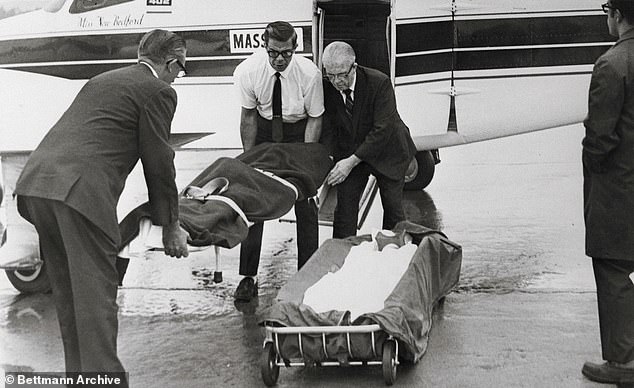 The body of Mary Jo Kopechne is removed from a charter plane at Wilkes-Barre-Scranton airport where it was taken to a Plymouth, Pennsylvania funeral home. 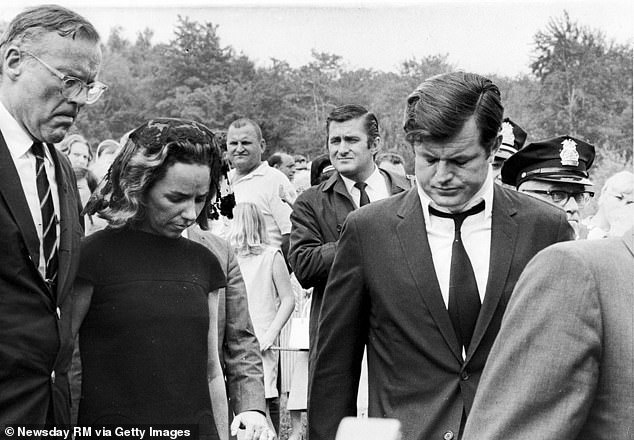 Kennedy (right) wears a neck brace as he and his sister-in-law Ethel Kennedy (left) leave St. Vincent’s Roman Catholic Church in Plymouth after a Requiem Mass for Mary Jo Kopechne

Ted Kennedy’s statement in the aftermath of the crash

Around 10am on the morning of July 19, Kennedy walked into the police station in Edgartown and handed police this written statement:

On July 18, 1969, at approximately 11:15 p.m. in Chappaquiddick, Martha’s Vineyard, Massachusetts, I was driving my car on Main Street [also known as Chappaquiddick Road] on my way to get the ferry back to Edgartown.

I was unfamiliar with the road and turned right onto Dike Road, instead of bearing hard left on Main Street. After proceeding for approximately one-half mile on Dike Road I descended a hill and came upon a narrow bridge. The car went off the side of the bridge. There was one passenger with me, one Miss Mary, a former secretary of my brother Sen. Robert Kennedy.

The car turned over and sank into the water and landed with the roof resting on the bottom. I attempted to open the door and the window of the car but have no recollection of how I got out of the car. I came to the surface and then repeatedly dove down to the car in an attempt to see if the passenger was still in the car. I was unsuccessful in the attempt. I was exhausted and in a state of shock.

I recall walking back to where my friends were eating. There was a car parked in front of the cottage and I climbed into the backseat. I then asked for someone to bring me back to Edgartown. I remember walking around for a period and then going back to my hotel room. When I fully realized what had happened this morning, I immediately contacted the police.

The letter does not make clear why Kennedy would stick to a story that seems more incriminating: that he knew Kopechne was trapped in the car, but decided for whatever reason not to call police until the following day.

However, Betty’s account may explain why the car went off the Dike Bridge, which was the opposite direction from the ferry terminal from the rented cottage, on a road that dead-ended on a secluded beach.

It would also explain why Kopechne left her purse and hotel key at the cottage, highly unusual if Kennedy had been taking her back to the ferry as he claimed.

‘There was such a cover-up and such disregard for Mary Jo when she died,’ Kopechne’s cousin Georgetta Potoski, now 79, told People.

‘I don’t think there will ever be justice for the loss of her life. [But] I think the truth would make our hearts rest easier.’

Kopechne would have been 79 this year.

Kennedy pleaded guilty to a charge of leaving the scene of an accident causing personal injury and later received a two-month suspended jail sentence.

He went on to win re-election to the Senate seven times after the fatal crash, and held the office when he died in 2009. 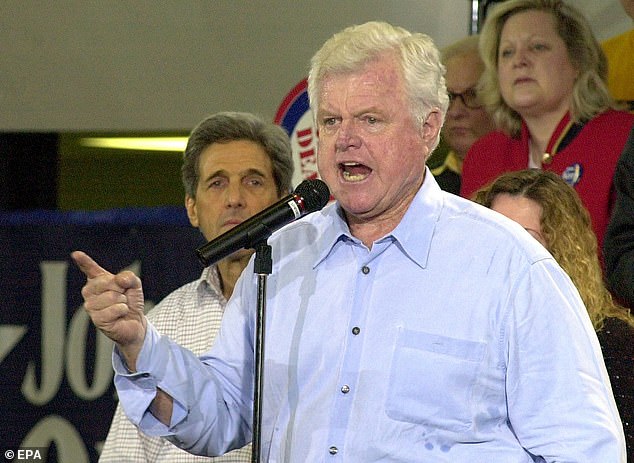 Kennedy is seen campaigning for John Kerry in the 2004 presidential race. He won re-election to the Senate seven times after the fatal crash, and held the office when he died in 2009