Leukaemia patients may be given new hope with treatment on NHS

The NHS is preparing to offer cancer patients a pioneering new treatment that may save thousands of lives.

Health chiefs today announced CAR-T therapy, branded a ‘game changer’, could be rolled out across hospitals this year.

The revolutionary ‘living drug’ revs up vital killer cells in the body’s immune system, teaching them to attack cancerous cells, even where other methods have failed.

Trials have already shown it effective in helping patients with blood cancer, which strikes 30,000 people in Britain each year.

Simon Stevens, chief executive of the NHS speaking at the 2017 NHS Confederation Conference in Liverpool. He is today expected to announce the NHS plan to use pioneering immunotherapy to combat chronic lymphocytic leukaemia

How does CAR-T work?

In a laboratory, a gene is then inserted into the T cells that prompts them to grow a receptor that targets a special marker found on some blood cancers.

Millions of copies of the new T cells are grown in the lab and then injected into the patient’s bloodstream where they can seek out and destroy cancer cells.

What is chronic lymphocytic leukaemia?

Chronic lymphocytic leukaemia (CLL) is a cancer that affects white blood cells, progressing slowly over many years. It is usually diagnosed in people over 60, and is very rare in those under the age of 40.

It does not usually cause symptoms early on, and may be picked up on in the results of a blood test for something else.

When symptoms do develop, they include:

There is currently no full cure for CLL, but treatments may include chemotherapy or a stem or bone marrow transplant.

If caught in the early stages, most people will live at least five years after diagnosis. 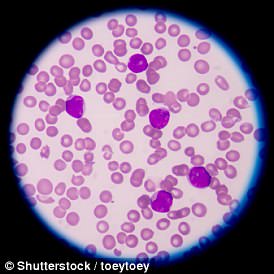 Under the microscope: CLL in a sample of blood. Unlike acute leukaemias, CLL develops slowly and is very rare in young people

Doctors call it a ‘living drug’ – permanently altered cells that continue to multiply in the body into an army to fight the disease.

CAR-T therapy was unveiled by Kite Pharma in 2017 at the world’s biggest cancer conference, the American Society of Clinical Oncology, in Chicago.

Is CAR-T proven to work?

Researchers presented a study that found eight patients out of nine with chronic lymphocytic leukaemia, a type of blood cancer that was thought to be incurable, had the disease eradicated after being given the therapy.

The trial showed that six months after treatment, the patients were still cancer-free.

It is understood hundreds of NHS cancer patients could benefit initially from the rollout of the treatment.

Mr Stevens will announce that the ‘game changer’ cancer treatment could be available before the end of year at the Association of British Pharmaceuticals Industry annual conference today.

He said: ‘The NHS has a proud history of delivering pioneering treatments.

‘As we celebrate the 70th anniversary, the NHS is working harder than ever to save lives and improve care by embracing cutting edge technology like CAR-T therapy and spreading innovation across the whole health service.

‘However, we can’t do this alone and we need the help of the manufacturers to ensure we can get these treatments to patients as quickly and cost effectively as possible.

‘Preparations are underway to make CAR-T, one of the most innovative treatments that has ever been offered on the NHS available to patients, but manufacturers need to set fair and affordable prices so treatments can be made available to all who need them.’

Mr Stevens will also speak of tech advancements which have cut cardiac arrest numbers in half.

The Royal Liverpool and Broadgreen University Hospitals NHS Trust have introduced bedside e-observations which have reduced the number of cardiac arrests by 46 per cent.

Bedside e-observations involve the use of clinical and digital innovation to monitor bedside observations.

It is thought that once the system is fully implemented by early May, it will free up 20,000 hours of nurses’ time per year.

A further technological triumph lies in the  Cambridge University Hospitals NHS Foundation Trust, who have reduced the use of paper patient records by 99 per cent since rolling out their electronic patient record in 2014.

This scheme has also saved the Trust around 2,500 inpatient bed days per year by reducing adverse side effects to medication through its e-prescribing and allergy-related prescribing alerts – also speeding up the time it takes to prepare medications for patients.