Leveson 2 inquiry will not go ahead after High Court ruling

A second Leveson inquiry will not go ahead after victims of press intrusion failed in a High Court challenge.

Culture secretary Matt Hancock announced in March that reopening the ‘costly and time-consuming’ inquiry, which reported on press regulation and ethics in 2012, was not ‘the right way forward’.

But lawyers for campaigners including Kate and Gerry McCann, Christopher Jefferies and Jacqui Hames claimed former PM David Cameron had made a ‘clear and unambiguous commitment’ to the second inquiry at a meeting in 2012.

They said cancelling it was therefore ‘unlawful’, because the four had a ‘legitimate expectation’ it would go ahead.

Judges were asked to examine the legality of the government decision to pull the plug on a follow-up to the press ethics inquiry and gave their decision today.

Sir Brian Leveson, who oversaw the first inquiry into press ethics. High Court judges have no found there is no legal reason to overturn a government decision not to hold a second inquiry

Lord Justice Davis said he had ‘a great deal of sympathy for the claimants’ and understood they would be disappointed.

But the judge added: ‘I am afraid that sympathy cannot override the law and I can see absolutely no basis for these grounds of claim … achieving the result which the claimants seek.’

Lord Justice Davis said Mr Cameron made ‘no such promise’ of a second inquiry at the 2012 meeting. 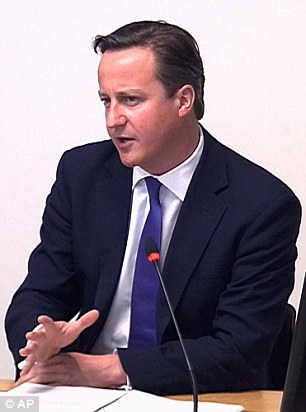 Campaigners claimed David Cameron promised the second part of the inquiry would go ahead, but judges said no such promise was made

The judge also said he found it ‘unacceptable’ that the case was based on a covert recording made of the meeting, despite everyone present having agreed that ‘what is said in this room stays in this room’ at the outset.

He said the case failed ‘at almost every level’.

Lawyers for the government has said a statement made by Prime Minister could not be legally binding on the Government.

After the ruling today, a spokesman for the Department of Culture, Media and Sport said: ‘We welcome the court’s judgment. The Government remains committed to ensuring that the inexcusable practices that led to the Leveson Inquiry never happen again.

‘The media landscape has changed significantly in the six years since the Leveson Inquiry was first published and we believe that the steps we have taken mean that continuing with Part 2 is no longer appropriate, proportionate, or in the public interest.’

Sir Brian Leveson heard the first part of the inquiry, which cost the taxpayer £5.4 million, over 17 months and delivered his report in 2012.

Kate and Gerry McCann were thrust into the spotlight when their daughter Madeleine went missing in Portugal in 2007.

Bristol landlord Mr Jefferies was libelled by the press when he was wrongly accused of the murder of Joanna Yeates in 2010.