Lewis Hamilton becomes the most successful driver at the British Grand Prix EVER as he claims sixth superb victory at Silverstone in front of more than 140,000 fans

The world champion took advantage of a safety car 20 laps into the race to emerge ahead of his Mercedes team-mate Valtteri Bottas and extend his world championship lead to 39 points.

The victory – Hamilton’s seventh in 10 races – was celebrated wildly by a partisan crowd of 141,000, a Silverstone high.

Lewis Hamilton celebrated in front of over 140,000 fans at Silverstone after winning his sixth British Grand Prix on Sunday

Hamilton became the most successful driver at the British Grand Prix ever, going ahead of Jim Clark and Alain Prost 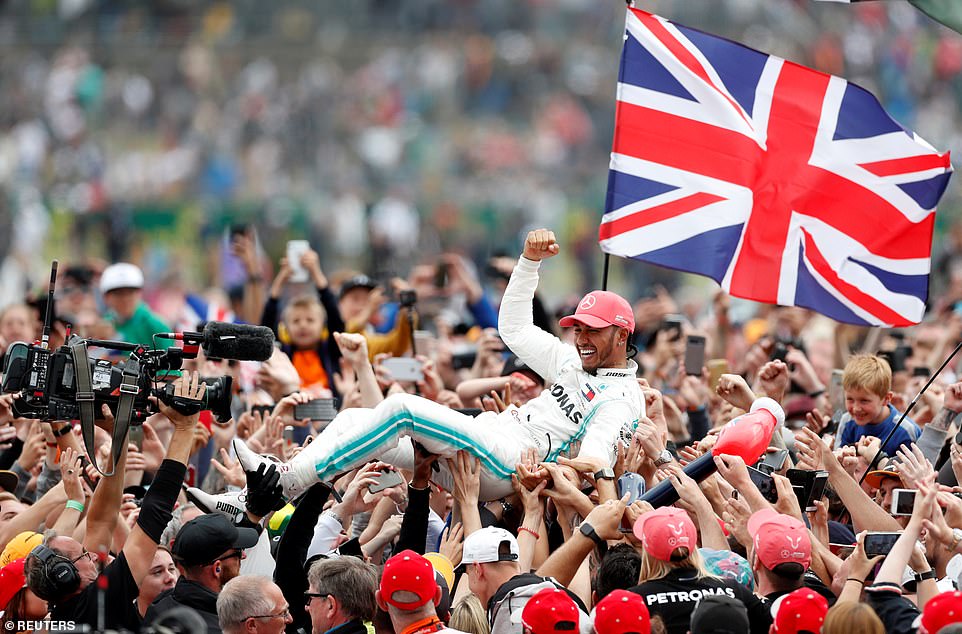 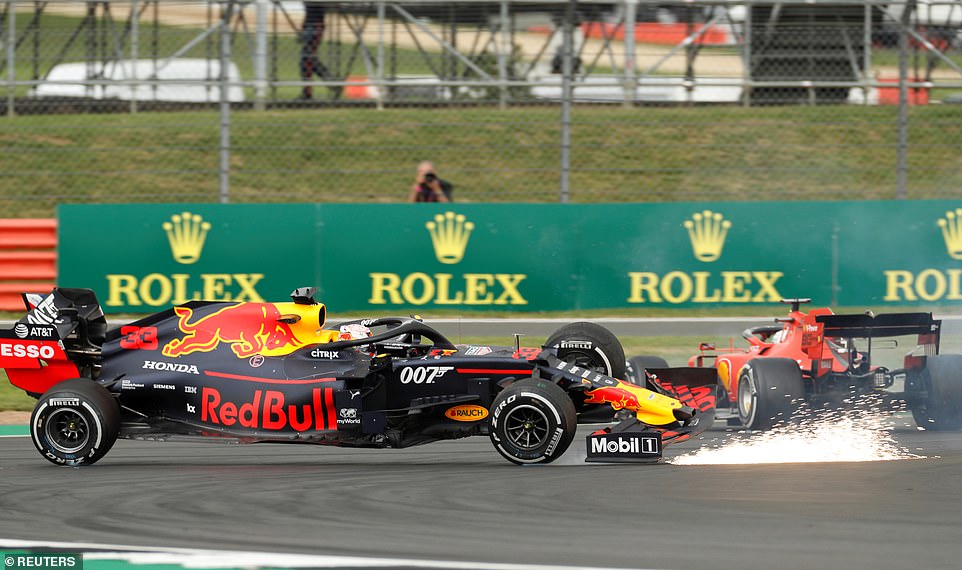 It lifted Hamilton ahead of Jim Clark and Alain Prost, both of whom won the race on five occasions. He was presented with the old Royal Automobile Club cup on the grey afternoon at the Northamptonshire circuit.

Bottas was second, 24.9 sec behind with Ferrari’s Charles Leclerc third.

There was plenty of incident in the race. The biggest moment came on lap 38 after Max Verstappen passed Sebastian Vettel at Stowe. The move was clean. Inexplicably Vettel then drove into the back of the Dutchman coming into Vale.

They both tumbled off track. Vettel was awarded a 10-second penalty for his indiscretion. It raises further doubts over his form and mindset. The mistakes are adding up and he now trails Hamilton by 101 points. 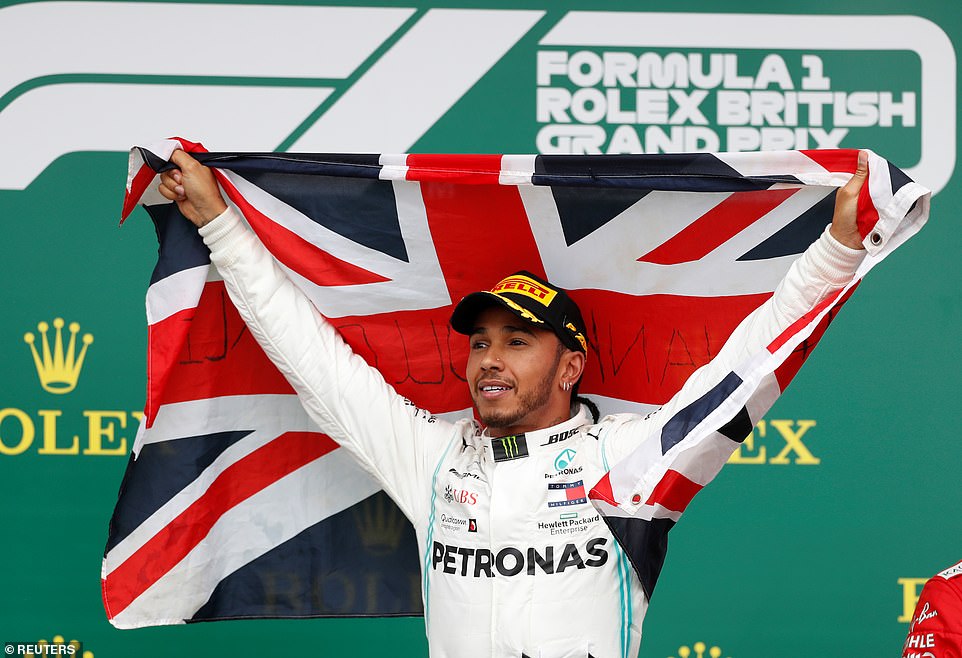 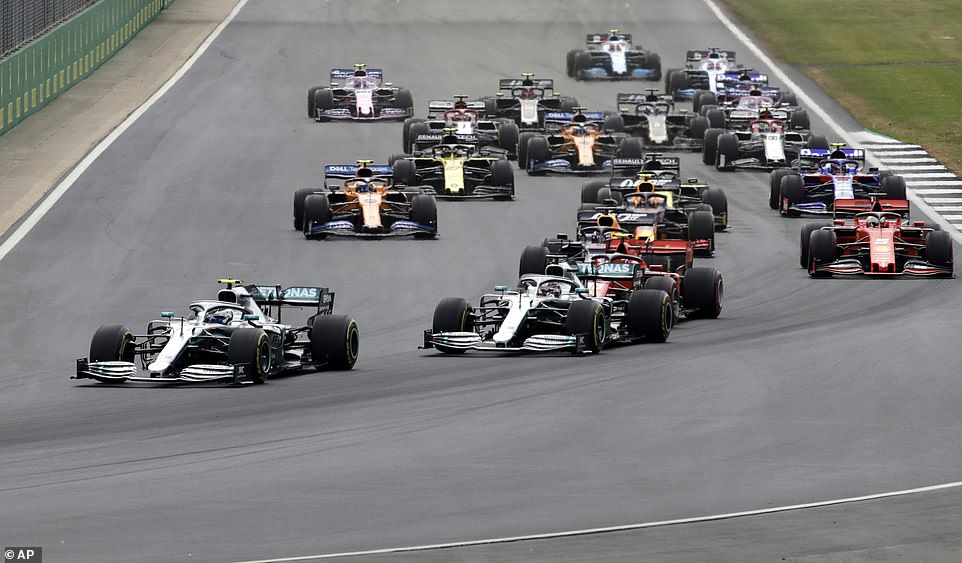 The front of the race was dominated by the Mercedes cards of Lewis Hamilton and Valtteri Bottas, with Ferrari close behind 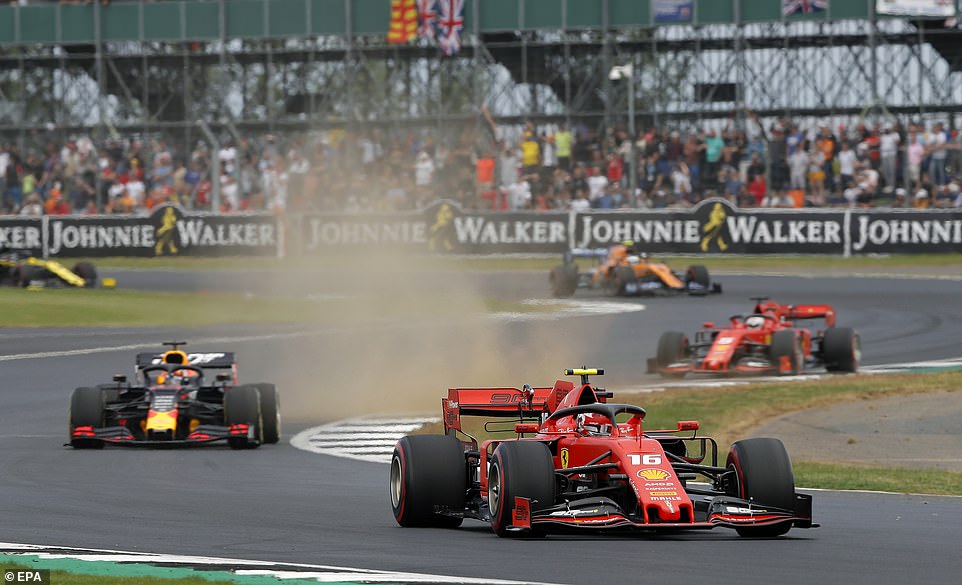 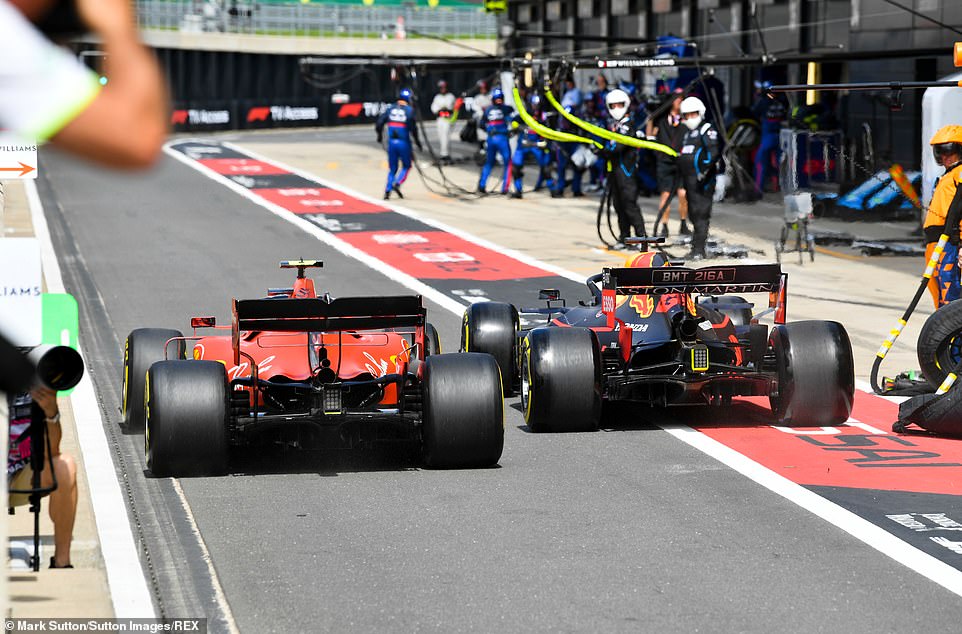 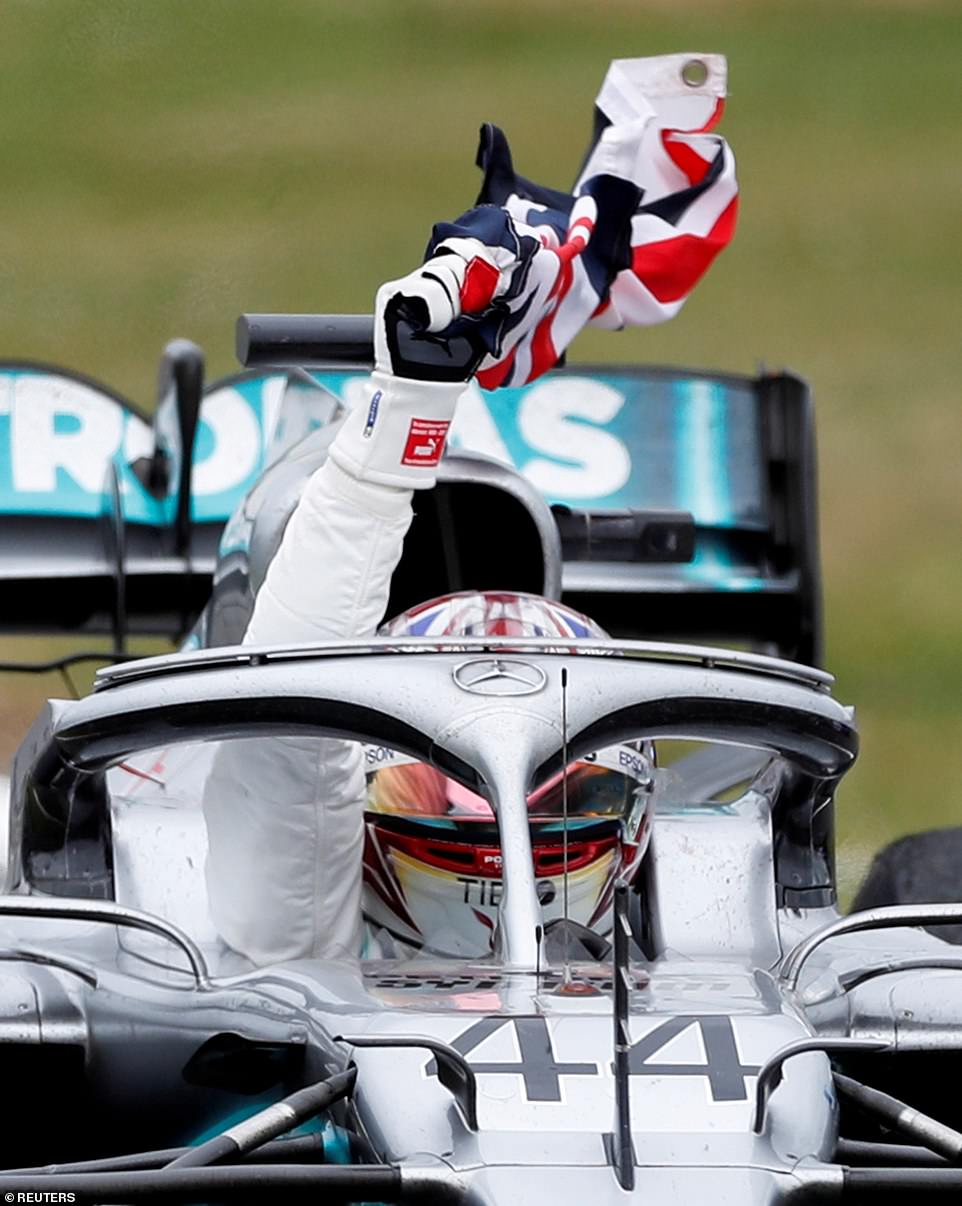 There was some thrilling racing, especially in the first half of the afternoon. Verstappen and Leclerc close danced again and again. Both raced beautifully.

Clearly Leclerc, who missed out on his maiden win in Austria a fortnight ago when passed by Verstappen, had learned his lesson and was determined to get his elbows out.

Hamilton tried to pass Bottas on track but could not pass the pole man, having started second himself. Both, again, played it hard but fair. They traded places on lap four. Hamilton ducked inside at Brooklands before taking the lead on the outside at Luffield. Bottas, however, had the tighter line and reclaimed the advantage on the drag into Copse.

The standard of fare was a tribute to Silverstone a few days after the deal to save the British Grand Prix until 2024 was struck between the circuit’s owners, the British Racing Drivers’ Club and Formula One’s owners, Liberty Media.

Lando Norris was 11th for McLaren, while his fellow British debutant George Russell was 14th for Williams, a career best.

Vettel was 16th, and a lap down – embarrassing. 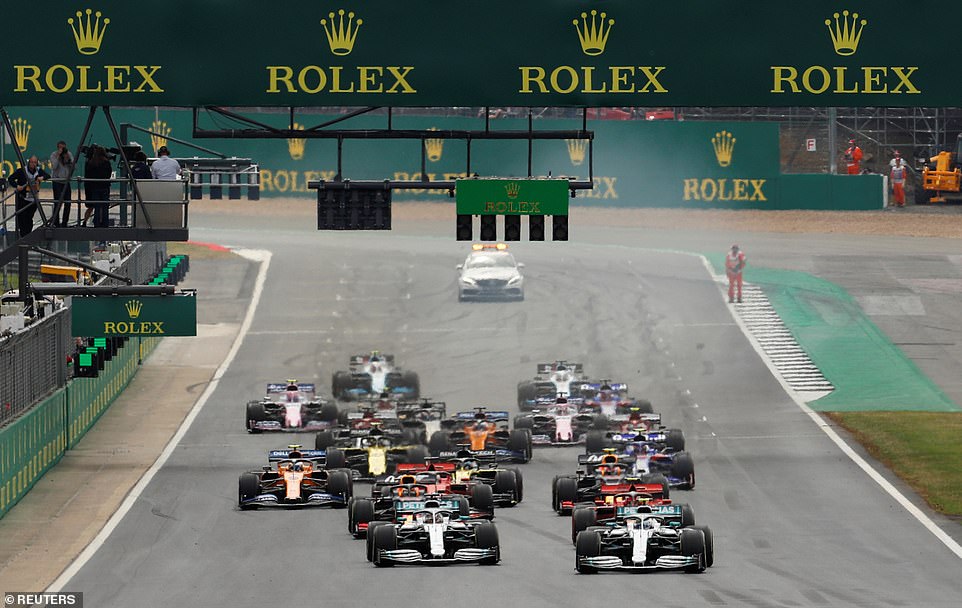 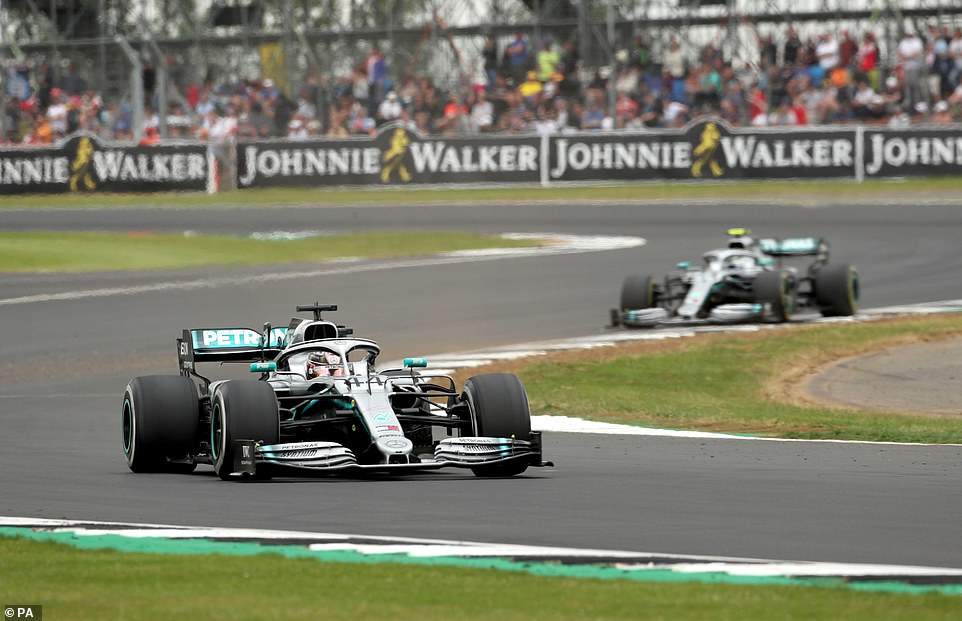 Lewis Hamilton has won the British Grand Prix for the sixth time in his career, coming out ahead of team-mate Valtteri Bottas 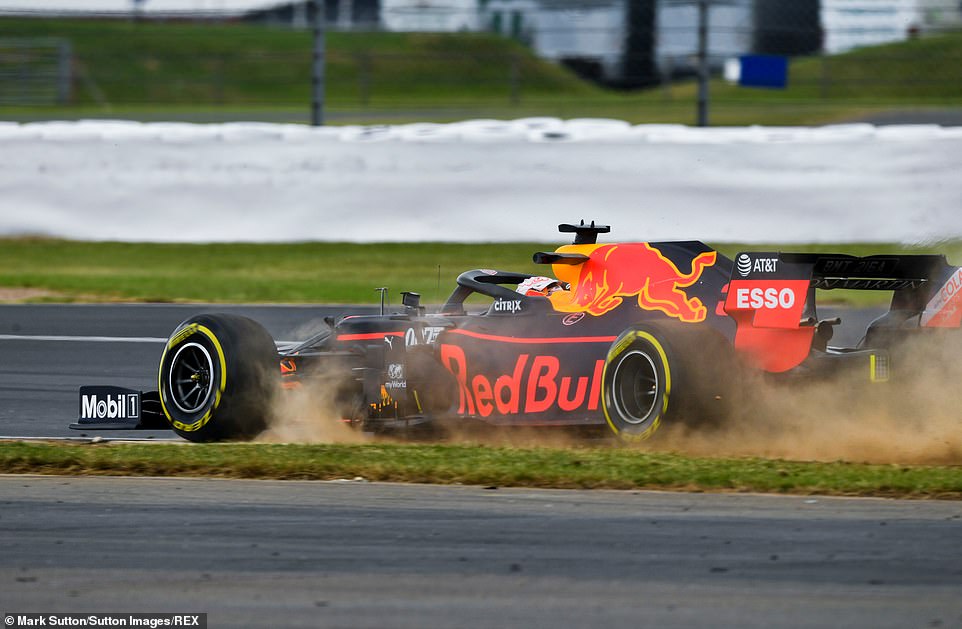 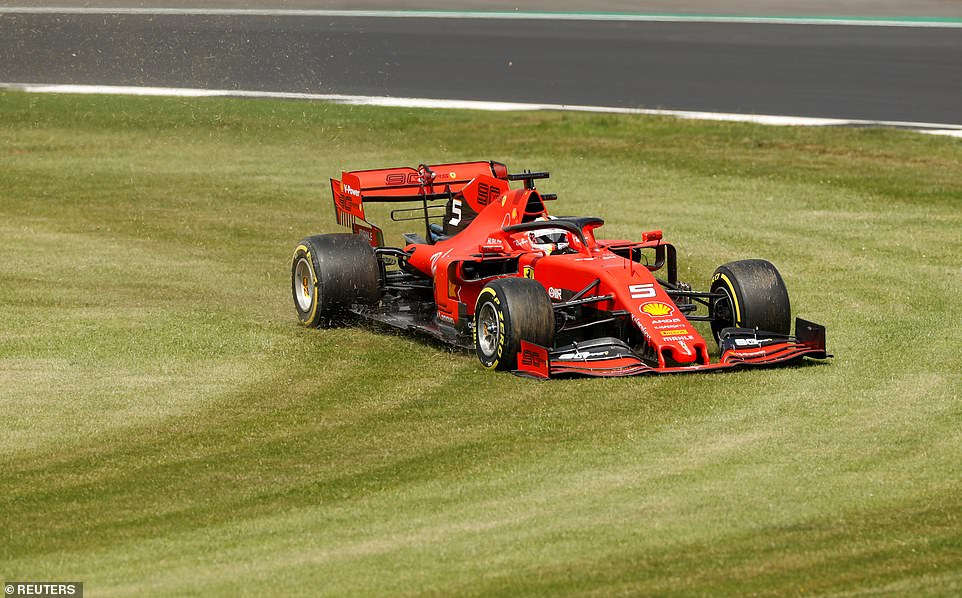 Sebastian Vettel was forced to pit after colliding with Max Verstappen, and was then given a 10 second time penalty