It’s ‘bull****’!: Lewis Hamilton blasts Formula One chiefs after Sebastian Vettel is hit with a post-race reprimand for wearing a ‘same love’ T-shirt in support of LGBTQ+ community ahead of the Hungarian Grand Prix

Lewis Hamilton has taken aim at Formula One’s ruling body after slamming its decision to reprimand Sebastian Vettel for wearing a T-shirt in support of the LGBTQ+ community as ‘bull****’.

Under FIA rules, drivers are permitted to carry a message that conveys with the sport’s We Race As One initiative during the pre-race ceremony. But the clothing must be removed for the national anthem.

Vettel was summoned to see the stewards. He explained that he forgot to remove his T-shirt because of the onset of rain.

Valtteri Bottas, Carlos Sainz and Lance Stroll were also reprimanded after they failed to take off their We Race As One T-shirts.

Vettel, who was stripped of his second place at the Hungarian Grand Prix following a fuel infringement, told Sky Sports: ‘I’m happy if they disqualify me. They can do whatever they want to me, I don’t care. I would do it again.’

In a now-deleted message on Instagram, Hamilton posted in support of Vettel.

The British driver, 36, said: ‘Super proud of this guy. There is no rule that says what colour shirt you can wear and supporting the LGBTQ+ community is not repremandable (sic).

‘This is bs. Well done, Seb. I’ll join you next time with the same shirt.’ 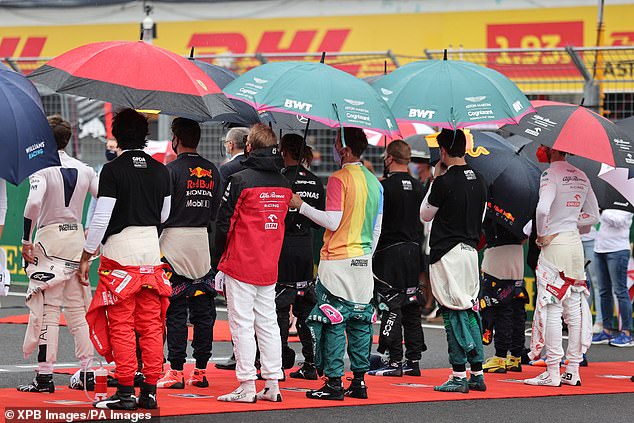 Vettel (centre) was reprimanded for leaving his shirt on (above) during the Hungarian national anthem, with Carlos Sainz (second left), Valtteri Bottas (right of Vettel) and Lance Stroll (second right of Vettel) also penalised for a similar offence

The seven-time world champion raced from last to third – upgraded to runner-up following Vettel’s disqualification – with a supreme recovery drive.

He will now use the four-week break to recharge his batteries after revealing he was suffering with the symptoms of long Covid-19.

Hamilton, who contracted the virus eight months ago, was examined by a Mercedes team doctor for 30 minutes after falling unwell following the race.

Hamilton’s Mercedes team held the edge over Red Bull at the concluding round before the sport’s mid-term shutdown.

Before being disqualified for a fuel infringement, Vettel (left) finished second ahead of Hamilton (right) at the Hungaroring

The Briton was in control of the race but was forced into his fightback after Mercedes elected to leave him out on wet tyres for the restart.

Hamilton said: ‘I tell you it’s definitely been a hard slog for us. But this weekend has been very strong, and (it’s) definitely surprising to see how strong we have been compared to Red Bull.

‘We keep pushing and fighting and I’m so honoured to be able to race for a team like this. We learn from these mistakes – unfortunately, we wish they didn’t happen – but it’s not how you fall, it’s how you get back up.’

The season fires up again at Spa-Francorchamps in Belgium on August 29 for the 12 concluding scheduled rounds.