Lewis Hamilton has started his title defence by opening a war of words with his chief rival for the championship, Sebastian Vettel.

The two men are trying to emulate Juan Manuel Fangio by winning their fifth drivers’ crown. On track, Hamilton struck the first blow of a 21-round season by claiming an emphatic pole position during a crash-delayed Australian Grand Prix, with Ferrari pair Kimi Raikkonen and Vettel seven-tenths of a second behind him in second and third places.

Afterwards the tension between Hamilton and Vettel bubbled to the surface when the Briton answered a question from the press conference floor about his Mercedes team’s so-called ‘party mode’ – supposedly a gizmo that can be flicked on to provide an extra injection of power during qualifying. 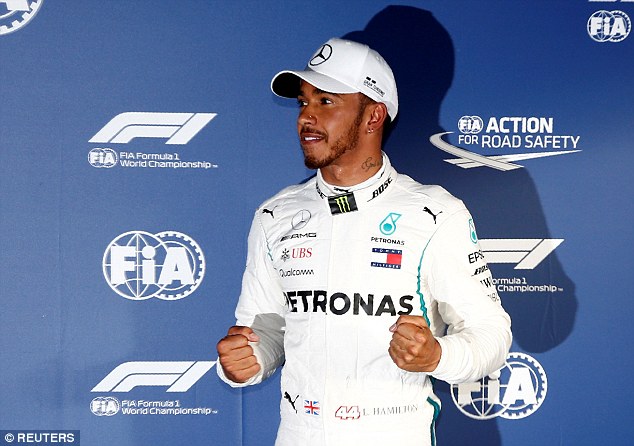 The Brit cruised round the Albert Park circuit in a time of 1:21.164 to clinch first place ‘I can assure you we don’t have a party mode,’ said Hamilton. ‘I use the same mode from Q2 (the second part of qualifying) to the end of Q3 (the third and final part). There was no extra button.’

Vettel, wondering why Hamilton had found significant additional speed compared to his early runs, interjected, saying: ‘What were you doing before?’ ‘I was waiting to put in a good lap,’ responded Hamilton. ‘To wipe the smile off your face.’

Vettel claimed not to have heard the comment because Hamilton, ‘said it so quickly first time, but now I get it,’ before adding: ‘What goes around, comes around. He is free to have a party tonight and hopefully Kimi and I will have a party tomorrow.’ After qualifying, Hamilton opened up a war of words with title rival Sebastian Vettel Hamilton, who said his pole lap was one of his best ever, denied he had ever used the phrase ‘party mode’, though he did. According to the driver himself at a recent Petronas sponsor event, Mercedes would hit the new season with a ‘race mode’ and a ‘qualifying mode’.

Two weeks ago he said: ‘Our quali mode is the most fun mode. It should be the party mode. It has the most juice, and it’s when we hit the highest speed.’

The row followed several strained moments between the pair last year, most notably when Vettel drove into Hamilton in Azerbaijan – a case of red mist. They had been friendly in Thursday’s press conference but the truce was never likely to hold in the white heat of battle.

Hamilton later tried to backtrack, claiming that his ‘wipe the smile off your face’ remarks were a ‘joke’. It was too late for that and did not ring true. 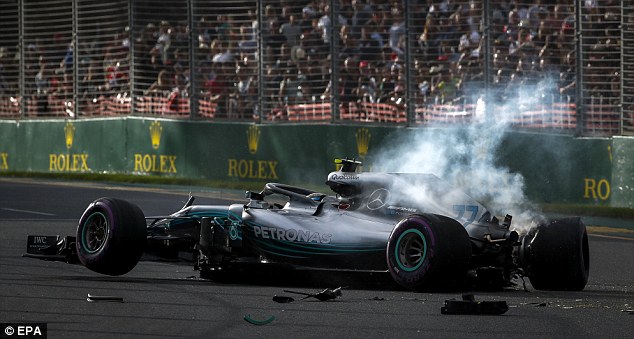 There is not expected to be any news on Hamilton’s new Mercedes contract until Sunday’s race – due to start at 6am BST – is well out of the way. A source close to the negotiations has indicated that everything remains on course and that Hamilton will ultimately sign the £40million-a-year deal.

Mercedes team principal Toto Wolff is conducting the talks and keeping the board of Mercedes’ parent company Daimler informed of developments.

Triple world champion Sir Jackie Stewart said: ‘Lewis is in a strong position but not bullet-proof. Daniel Ricciardo is potentially available next year.’ 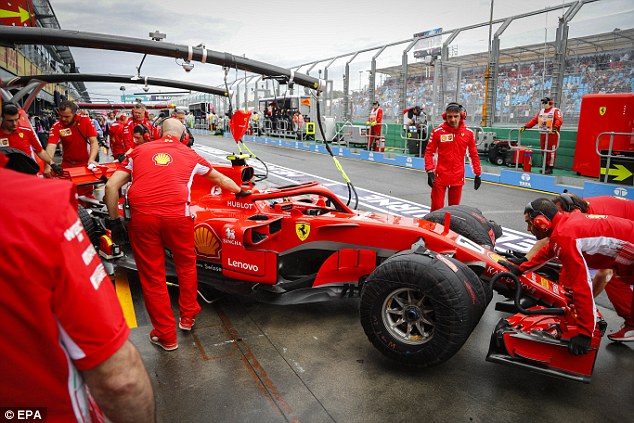 Kimi Raikkonen impressed in his Ferrari, coming second ahead of team mate Vettel 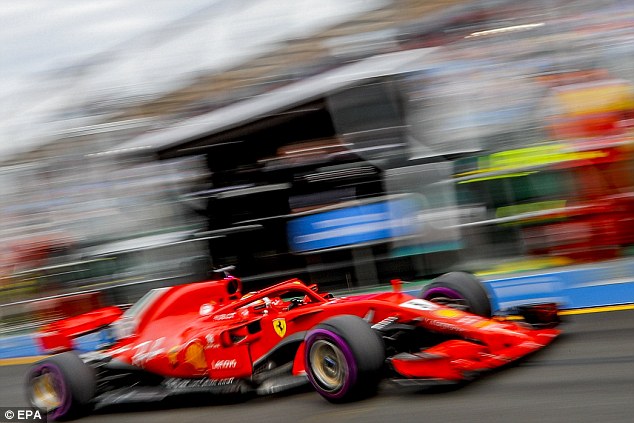 Vettel is billed as Hamilton’s closest challenger this season, and showed some promising pace

Hamilton’s 73rd career pole, and a record seventh in Australia, was in marked contrast to his team-mate Valtteri Bottas’ afternoon.

The Finn lost control while travelling at 120mph, spinning into the advertising hoardings. His car was a sad mess, but the driver was declared fit and well after a routine medical check. Marshals with brushes cleared the debris away. The delay to proceedings lasted 10 minutes.

‘I was just pushing a bit too hard,’ said Bottas, who qualified 10th. ‘I went wide in Turn One and the kerb was still a bit damp. I lost the rear of the car and hit the wall outside of Turn Two.

‘It’s very unfortunate and I feel sorry for the team because we have a really competitive car. It looked like it was damaged pretty badly. I hope we can fix it for the race.’ Bottas, who is on a one-year contract, cannot afford mistakes if he is to win the longer-term confidence of boss Wolff, who shook his head dejectedly as the spin unfolded.

McLaren’s switch to Renault engines hardly seemed worth the hassle yesterday. Fernando Alonso and Stoffel Vandoorne had been 13th and 18th fastest last year when powered by Honda and were 11th and 12th yesterday.

The team endured a trouble-plagued testing programme before arriving in Australia. Racing director Eric Boullier had brushed aside those concerns as teething problem they had overcome. In fact, plus ca change.