Lewis Hamilton has claimed he is considering quitting Formula One at the end of the season.

The Briton’s surprising remarks came after a fine victory here at the Emilia Romagna Grand Prix put him on the threshold of a record-equalling seventh world championship triumph.

If he wins in Istanbul a week on Sunday he will be re-crowned regardless of how Valtteri Bottas, his nearest pursuer — if that’s the word — performs.

Hamilton’s form, his mood and results are all sky high, which made these musings about his future all the more bizarre.

When asked about uncertainty over his boss Toto Wolff’s future as team principal — the 48-year-old Austrian is considering becoming chairman or chief executive — Hamilton said: ‘I don’t even know if I am going to be here next year so it is not really a concern for me at the moment.

‘We have a lot of deep conversations, Toto and I, and I know where he is mentally. We carry a lot of the weight together. 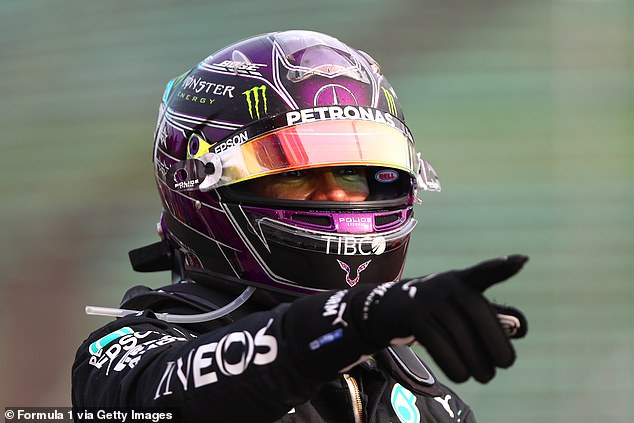 ‘I have been here a long, long time and I can understand him wanting to pull back a little bit and give more time to his family.

‘I don’t know who will replace him but he is a leader and he wouldn’t put anyone in his place who is not able to do the job. He will find the right person.’

Speaking of the 17-race season and its intensity, Hamilton, 35, added: ‘We are in November and Christmas is not that far away. I feel great, very strong and that I could go on for plenty of months but, Toto mentioned about “shelf life” and there are multiple things on the top of my mind.

‘I would like to be here next year but there is no guarantee of that. There is a lot that excites me about F1’s afterlife, so time will tell.’

It is doubtful that Hamilton is serious about retiring — indeed he has recently talked of going on and on. It is more likely his remarks are simply contrary or the public part of a negotiation that he hopes will deliver the £40million-a-year deal to remain at Mercedes he craves. 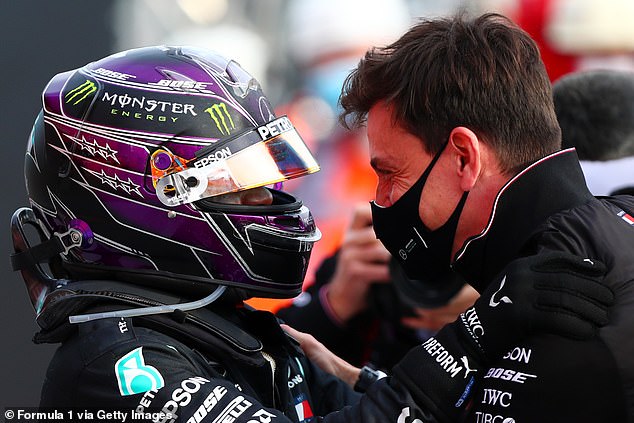 Given that a seventh title is a formality, Covid-permitting, a potential eighth championship glory must tantalise him.

Wolff said: ‘I guess if Lewis were to decide to step out of Formula One, which I don’t think will happen, we are going to have a frantic driver market out there.

‘There will be a moment, when the drivers’ championship is decided, to sit down and we have a few months before the first race in Australia next year.’

As for yesterday’s grand prix, Hamilton overcame a poor start to triumph. He started second but lost a place at the opening corner to Red Bull’s Max Verstappen. But when then-leader Valtteri Bottas, who started on pole, and Verstappen pitted, Hamilton stretched his legs at the front to establish a winning margin.

He pinged in four fastest laps, three of them consecutively, to open up a 28-second lead over Bottas. This should have been enough for him to be re-shod and still emerge in the lead. But life was made easier for him when Renault’s Esteban Ocon retired with a clutch problem and a virtual safety car was deployed. 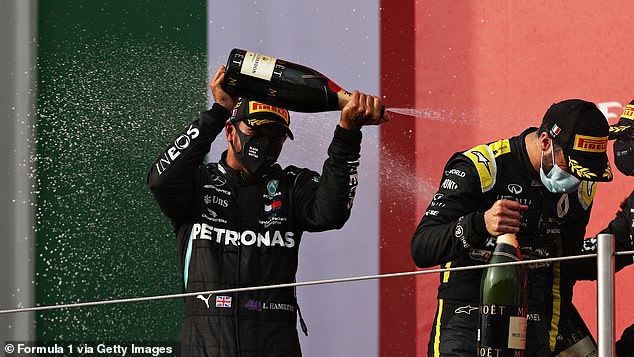 After his victory on Sunday, Hamilton said ‘there was no guarantee’ he’ll still be in F1 next year

This allowed Hamilton to peel into the pits and come out a comfortable five seconds ahead of Mercedes team-mate Bottas. Game over.

As the Briton had predicted of the famous Imola track, where his idol Ayrton Senna’s death is commemorated in a bronze statue, it was a largely boring race with little overtaking.

But that mattered little to Hamilton for he now goes to the Turkish Grand Prix knowing that he is likely to go level with Michael Schumacher at the top of the tree with that seventh title.

With Hamilton winning and Bottas finishing second, Mercedes claimed the constructors’ crown for the seventh year in succession — a feat never achieved before in the history of motor racing.

Verstappen passed Bottas on lap 43. ‘Sent it,’ he yelled in delight, thinking he would be on the second step of the podium. He had driven superbly to separate the two Mercedes before he suffered a right-rear puncture with 12 laps remaining. 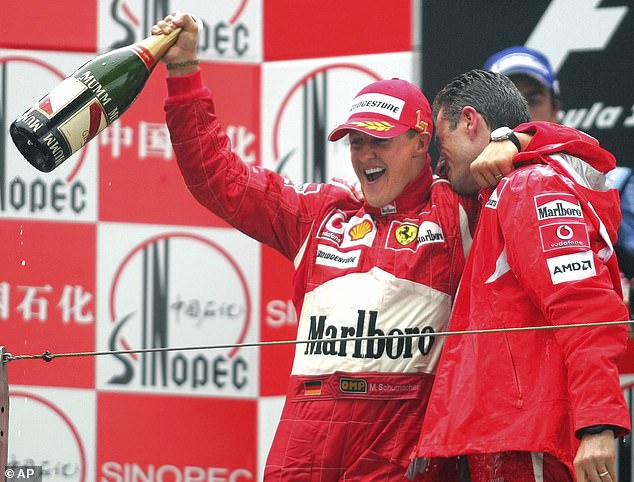 If he signs a new deal, Hamilton could look to beat Michael Schumacher’s record seven titles

That presented the opportunity for Renault’s Daniel Ricciardo, in good form, to finish third.

Verstappen’s spin brought out the safety car. Hamilton took the opportunity to move to soft tyres and remained in the lead, Bottas behind him.

He then made a clean getaway as the race restarted and ultimately blazed 5.7sec ahead, setting the fastest lap right at the end, improving on his own best time. 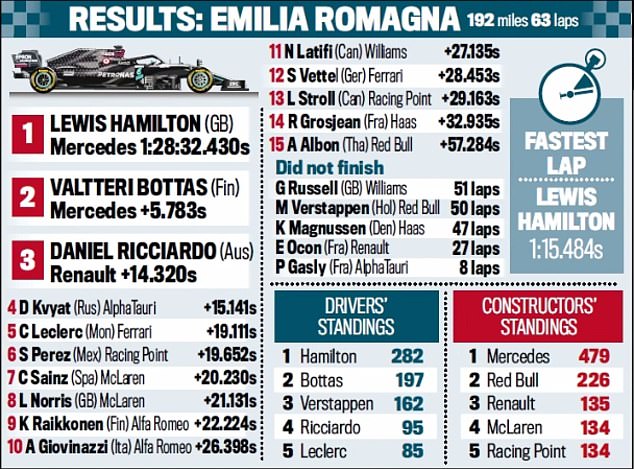