Max Verstappen ended victorious, Lewis Hamilton finished in the middle of the pack and Mick Schumacher missed out entirely after he crashed out horrifically in qualifying in an incident-filled weekend in Saudi Arabia – and it may have implications for the rest of the 2022 season.

Ferrari, and more specifically Charles Leclerc, look like they can genuinely challenge Red Bull for the title this season – unlike Mercedes – and there are genuine and justifiable questions about whether F1 should be racing in Saudi Arabia, with concerns ranging from the dangerous track to the geopolitical situation in the kingdom.

Below, Sportsmail looks back at the action and reaction and analyses what we learned from a dramatic weekend in Jeddah.

It’s still early days in the season but the early signs for the Maranello team look brilliant.

Red Bull team principal Christian Horner joked there are ‘only’ 21 races left, so there is plenty of time for teams on top to run into problems, for struggling teams to improve, and for new narratives to be written.

Remember how Hamilton’s then-Mercedes team-mate Valtteri Bottas winning in Turkey was supposed to be a turning point that he was ready to really challenge to be the team’s top dog? The Finn then finished a distant 161.5 points off the Brit.

But, it does look like historic constructor Ferrari have a real shot at being competitive in the title race, 15 years on from the last time they won the championship in 2007 with Kimi Raikkonen.

The talent of Monegasque star Leclerc, 24, has never been in question. He has constantly punched above his weight in his team’s mediocre recent cars, outperforming rivals with similar vehicles with guile and ingenuity.

Now he has a car to really challenge Red Bull and Verstappen and he will strike fear into his competitors – even if it is his first title battle. Ferrari team-mate Carlos Sainz, too, is no slouch and could well make a bid to be No 1 himself once he gets on top of the new car. Both drivers currently sit above Verstappen, who had to retire out in the opening race in Bahrain, in the standings. 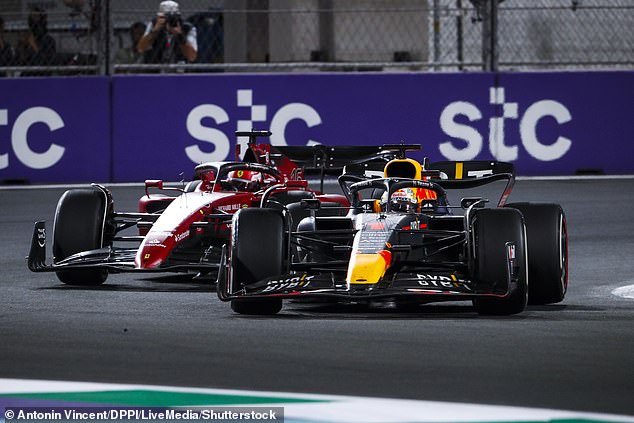 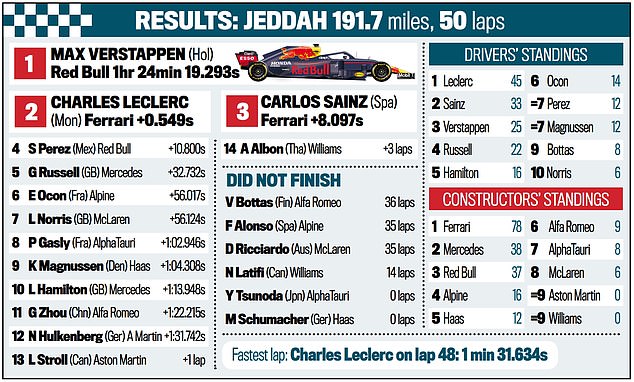 Ferrari have started well before, in 2017 and 2018 when Sebastian Vettel looked like he would be an early contender, but a series of mistakes from team and driver derailed that title charge as Mercedes out-developed them.

Current boss Mattia Binotto – engine chief in those years – says the Maranello outfit has learned from those experiences.

He said: ‘It’s true our competitors are very strong in that and… since then, we have improved our tools and we are much better prepared than in the past to do a better job. We need to make sure we have the right policy on that because it could be a game changer.’

And is Verstappen feeling the pressure of the Ferraris? Despite winning a close race, he was criticised by fans for his plaintive cries of injustice over team radio, seemingly taking a leaf out of the book of his boss Horner, or ‘Whinger Spice’ – in reference to his wife Geri’s ‘Ginger’ nickname in the pop group Spice Girls.

Everything points to it not just being Mercedes vs Red Bull at the top again, for now. And the sport is all the richer for it. 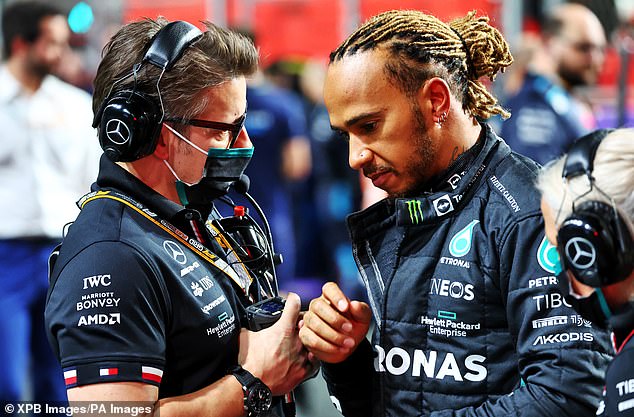 Lewis Hamilton, who finished 10th, and Mercedes look well off the pace so far in this campaign

Mercedes remain well off the pace

Horner was keen to say after the race he has ‘no doubt at some point Mercedes will join the battle’. Mercedes themselves don’t quite share his confidence yet though.

Perennial title contender Hamilton was eliminated in the first qualifying session for the first time in five years, and the first time on pace in 13 years, and admitted he is still struggling to get to grips with the ‘balance’ of the latest car.

Although he looked more competitive on race day in Jeddah, finishing 10th and at one time running as high as sixth, he was still miles off the pace of Leclerc and Verstappen and sparked real concern when he admitted he couldn’t keep up with drivers from American team Haas – who finished bottom of last year’s constructors’ championship with zero points.

His concession that ‘there’s a lot of work to do’ looks to be a bit of an understatement.

‘We are third on the road, and sometimes not even that like today. It’s just not an option to stay where we are.’ Hard to argue with that.

What happened on Friday was ridiculous. Drivers taking their cars for a spin round the Jeddah circuit in practice encountered thick black smoke over the track, from a missile attack by Yemen’s Houthi rebels on an oil depot a few miles down the road.

Wolff said: ‘These things happen here’. Many will argue that is exactly why F1 should not be in Saudi Arabia. Hamilton put it more bluntly: ‘I am looking forward to getting out’.

Sportsmail reported over the weekend that drivers felt ‘bullied’ into racing after a number of them – including Hamilton – expressed their desire not to compete in the wake of the bombing.

It was claimed some said drivers received unspecific warnings there could be ‘payback’ or ‘repercussions’ if they decided not to race, an allegation chiefs at Formula One strenuously denied. 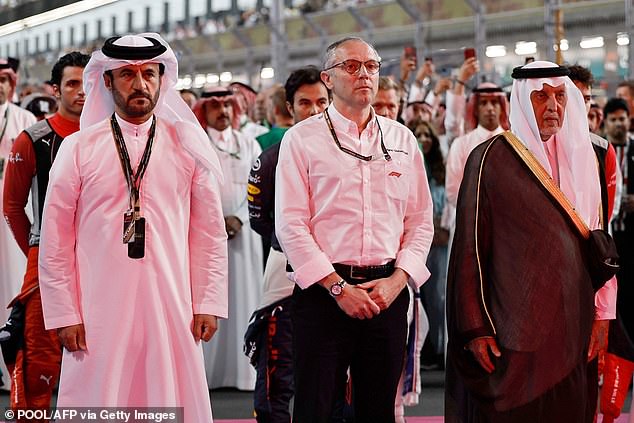 A Formula One spokesman said: ‘Any suggestion anyone was forced into this decision is wrong. Everyone met and discussed together and the collective decision was to proceed based on the advice we were all given.’

Even putting aside the current geopolitical tensions, Saudi Arabia’s kingdom is involved in using the death penalty with 108 executions this year; is internationally condemned for its actions in the ruinous war in Yemen; punishes same-sex relations; cracks down on academics, reformists and women’s rights activists.

Amid growing irritation at racing in Saudi Arabia, F1 CEO Stefano Domenicali came out defiant that ‘no one can judge our morality’. This one is likely to run and run.

On a more positive note, the new rules and regulations aimed at encouraging overtaking and close back-and-forth battles between drivers seemed to have worked, going by Sunday’s race.

Leclerc and Verstappen’s place-swapping battle throughout the race and especially towards the denouement was a thrilling throwback, reminiscent of the sport at its best.

Fans will hope to see more of the same after last year’s frequent dullness which saw Hamilton or Verstappen sail off into the distance, untouched until the chequered flag.

Fernando still has the edge

Two-time champion Fernando Alonso, now 40, definitely still has the hunger for competition despite being the oldest on the grid.

The Spaniard still has that same razor-sharp racing edge as he did at the start of his career.

New Alpine team principal Otmar Szafnauer will have had his heart in his mouth watching Alonso and team-mate Esteban Ocon going head-to-head and side-by-side in a superb go-karting-esque clash for sixth spot early on.

He professed to Sky Sports that he was happy to see them race but there were no doubt a few gritted sets of teeth as the duel hotted up.

But that competitive edge is exactly what makes Alonso so good. More of the same please as he chases two more podium finishes to reach 100 in Formula One. 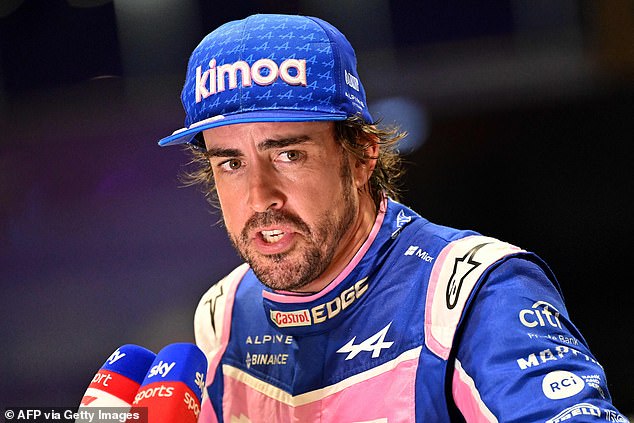 Mick Schumacher’s 170mph crash into the concrete barriers during qualifying was nasty.

Luckily the German was fine, but the horrific smash which saw him airlifted to hospital could have been avoided.

The tight, twisty Jeddah track is designed to be an exciting racecourse, but the fastest street circuit on the calendar resulted – and will result – in more crashes.

If F1 stays in Saudi Arabia – which itself is its own question – safety must improve. Changes were made from 2021 to 2022 but the track set-up means there feels an inevitability of crashes and while dramatic viewing, driver safety is paramount.

Seeing Schumacher lifted from his car was a sight nobody wants to see repeats of.

Nicholas Latifi ran into the wall too on race day. It’s a legitimate worry. 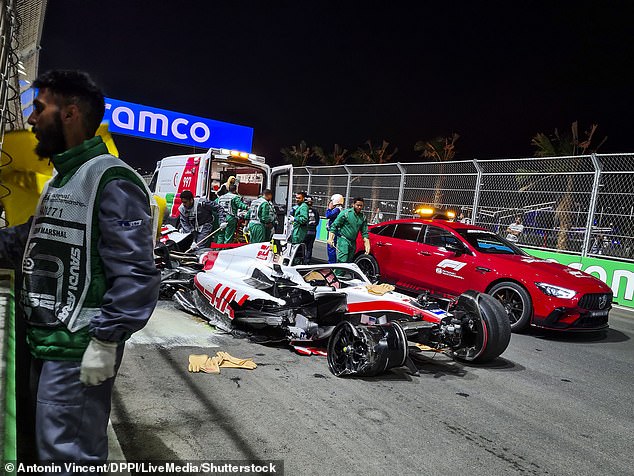