Gay and bisexual men should avoid oral sex and sexual positions that involve face-to-face contact to limit the spread of monkeypox, a charity has said.

The LGBT Foundation has released sexual health advice for men who have sex with men, who have made up the majority of new cases of the virus.

Monkeypox relies on prolonged close contact to spread, meaning it can be passed on during sex — although it is not classified as a sexually-transmitted infection.

But the majority of monkeypox cases in the fresh outbreak have been in gay and bisexual men and have been linked to raves, festivals and sex parties in Europe.

Health chiefs in the UK are currently advising anyone with a new rash or blisters to avoid having sex until they get tested. Brits who test positive are told to wear a condom for eight weeks after they overcome the virus.

The World Health Organization has also urged people to their number of sexual partners.

Public health messaging has predominantly been aimed at gay and bisexual men, but experts warn monkeypox can be spread by anyone.

It comes after another 11 cases of the virus were spotted in England on Tuesday, taking the UK’s total number to 190. 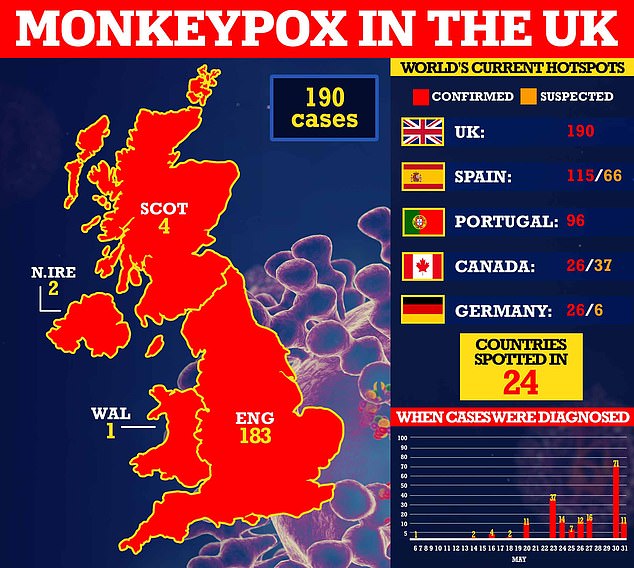 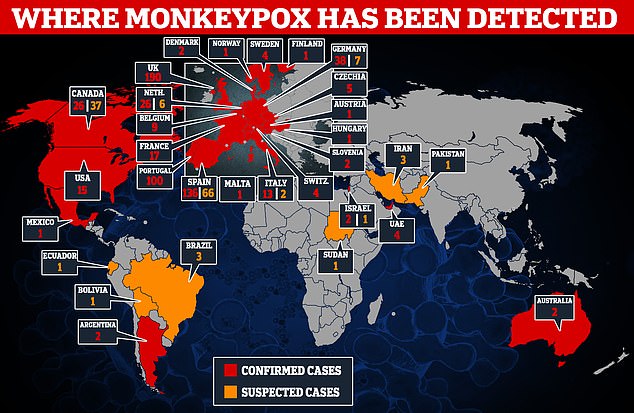 The LGBT Foundation published 10 recommendations for sexually active gay and bisexual men to limit their risk of catching or spreading monkeypox.

Its first guideline tells people ‘the fewer people, the better’ when it comes to sexual partners.

The charity also recommends people avoid having sex on dirty surfaces or use wipes to clean them before and after.

And people should continue to use condoms as a measure to lower the risk to themselves and partners, it said.

The charity urged people to choose sex positions that are not face-to-face to reduce physical contact.

It said: ‘Consider having sex in front of a mirror if you want to see your partner’s face whilst having intercourse.

‘Think about how you can reduce contact — perhaps now is the time to try out some clothed role-play or that glory hole fantasy.’

Sex toys should not be shared between partners and people should avoid kissing, the guidance says.

An almost identical list of reccomendations were published by the charity during the Covid pandemic to reduce the risk of passing on the killer virus during sex.

But the guidelines have now been updated to include ways of preventing flu and monkeypox.

The intro to the 10 recommendations reads: ‘Whether it’s Monkeypox, Flu, or Covid-19, close contact with sexual partners can increase your risk of contracting an infection.

‘Despite this risk, we understand that for some people sex is important and so below are some ideas on how to reduce the risk.’

UK Health Security Agency guidelines currently ask people to abstain from sex or close contact with others ‘until their lesions have healed and the scabs have dried off’.

Experts have previously linked the global monkeypox outbreak to sex at two festivals in Europe.

Dr David Heymann, who used to head the WHO’s emergencies department, said someone with the tell-tale monkeypox lesions likely ‘spread it to others when there was sexual or close physical contact’.

He said this may have happened at two recent raves in Spain and Belgium.

The Gran Canarian pride festival, held between May 5 and 15, is being investigated after being linked to numerous monkeypox cases.

And organisers of a large-scale fetish festival in Antwerp, which ran from May 5 to May 8, said there is ‘reason to assume’ someone at the event had monkeypox.

On its designated monkeypox information page, the LGBT Foundation says: ‘Monkeypox is spread through skin-to-skin or close contact, which means it can be passed on during sex, but it is not known to be sexually transmitted.

‘It can be passed on by touching bedding, towels, or clothes used by somebody with a rash caused by monkeypox, or rarely through coughs and sneezes of a person with monkeypox.

‘It is important that everyone is aware of monkeypox symptoms.

‘Even if your rash is not monkeypox, other infections such as herpes and syphilis can cause rashes which need treatment.

‘Rashes are common and most will not be caused by monkeypox, but may still require treatment. It is a good idea to speak to a medical professional if you have any new rash.’