He recently split from his wife-of-eight-months, Miley Cyrus.

And on Monday, Liam Hemsworth looked rather downcast while spending time with his brother Chris and their friends on the beach in Byron Bay, NSW.

The Hollywood actor, 29, appeared to be in low spirits and deep in thought as he stood on the shore.

Low spirits: Liam Hemsworth looked downcast while spending time with his brother Chris and friends at the beach in Byron Bay, NSW on Monday… after his shock split with Miley Cyrus 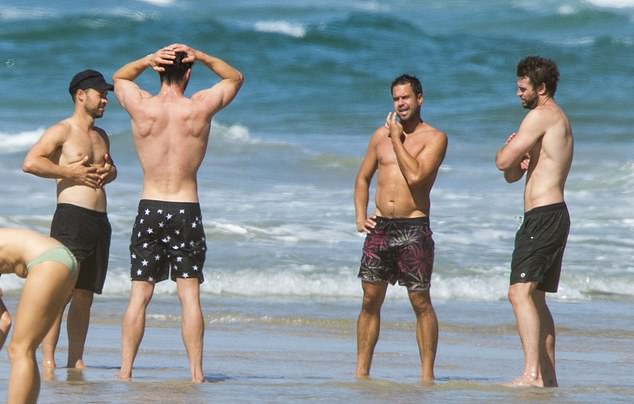 Support: Liam (far right) appeared to be in low spirits and deep in thought as he gazed into the distance. Pictured with his brother Chris (centre left, facing away) and two other male friends

The Hunger Games star, who was wearing a pair of black boardshorts, crossed his arms and gazed into the distance.

He failed to crack a smile and eventually crouched on the edge of the water as the waves hit the shore.

Meanwhile, Chris appeared to be much happier as he chatted to friends. 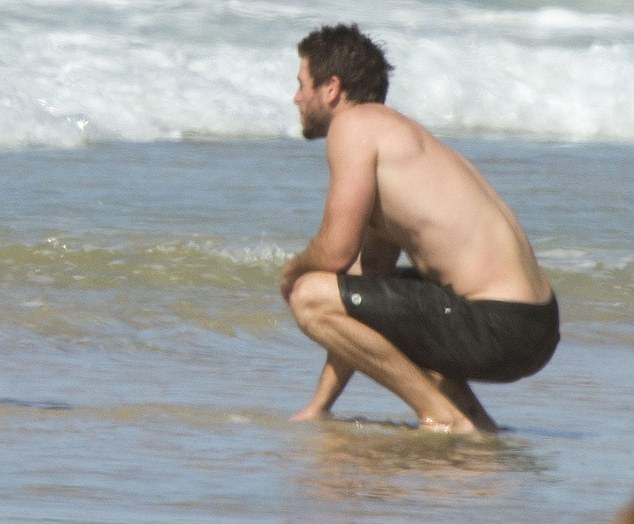 Hard times: Liam (pictured) failed to crack a smile as he crouched along the edge of the water 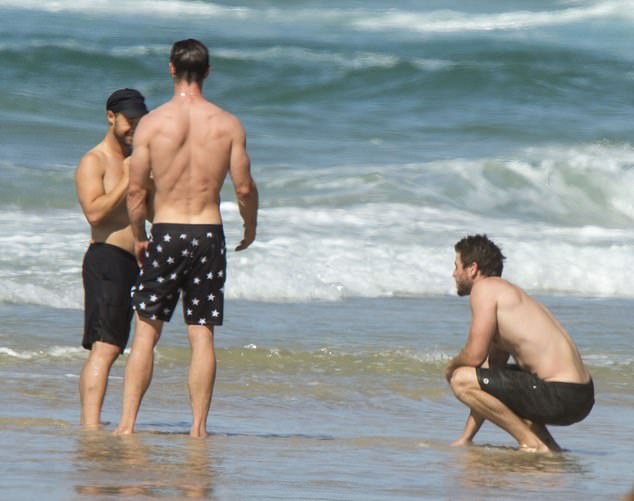 Beach day: Chris (centre) spoke to a friend as they stood on the edge of the water while Liam (right) sat beside them

The Thor actor wore star-printed shorts as well as a black hat and sunglasses to protect himself from the sun.

Liam is believed to be currently staying in a $4.3million beach house in Byron Bay owned by Chris and his wife Elsa Pataky.

He and Miley reportedly called it quits in June after ‘drifting apart’, but the couple did not confirm their split until two weeks ago. 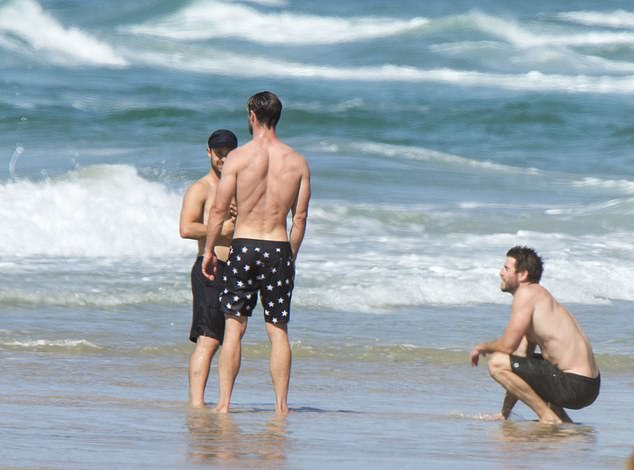 Home: Liam is believed to be staying in a $4.3million Byron Bay beach house owned by Chris and his wife Elsa Pataky 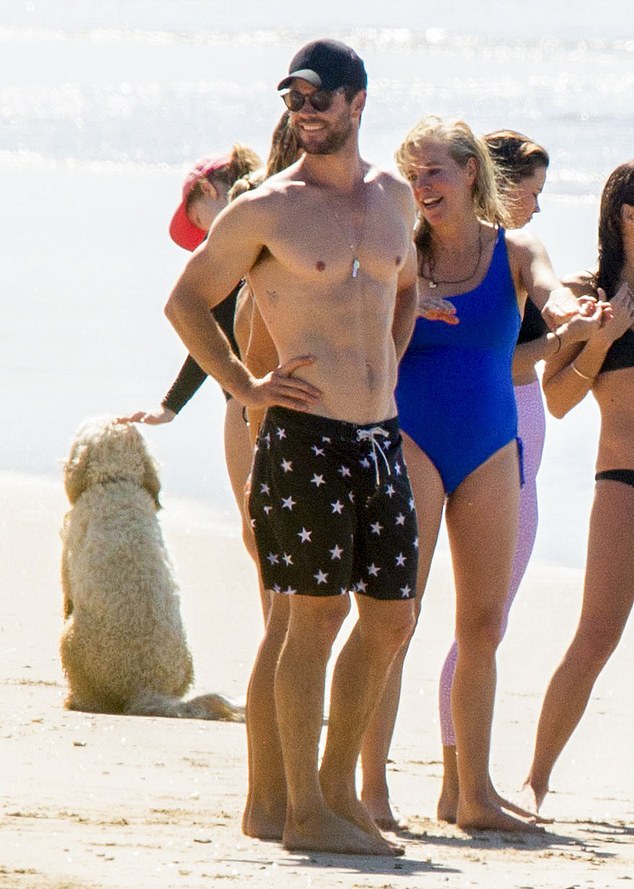 Loving life: Chris (pictured) appeared to be in high spirits as he stood with friends on the beach in Byron Bay

Miley, 26, issued a statement via her publicist to People magazine, in which she confirmed the break-up.

‘Liam and Miley have agreed to separate at this time. Ever-evolving, changing as partners and individuals, they have decided this is what’s best while they both focus on themselves and careers,’ the statement read. Fun in the sun: Chris (pictured) wore black printed shorts as well as a hat and sunglasses to shield himself from the sun 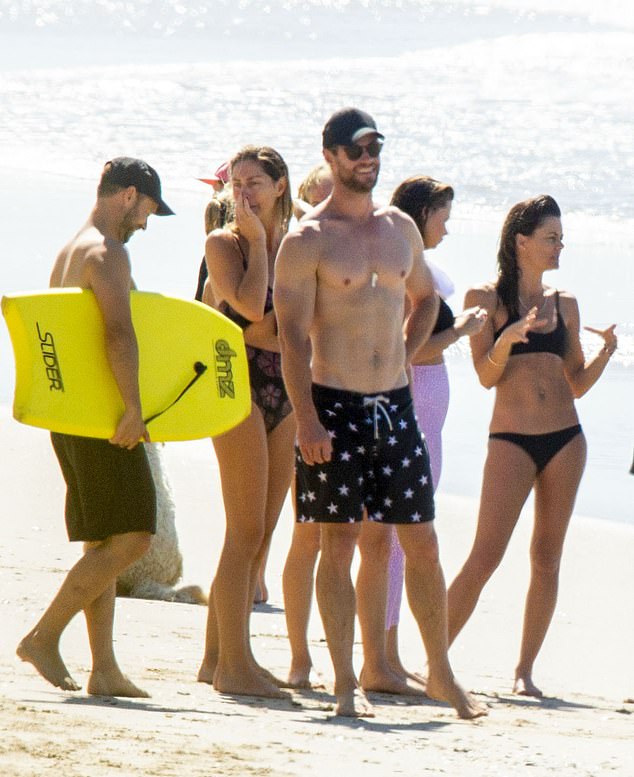 Supportive: Chris has been supporting his brother after Liam split with Miley, who he had been married to for eight months and dated on-off for 10 years

Taking to Instagram on Wednesday, Liam finally broke his silence with a brief message addressed to his fans, alongside a picture of a sunset.

‘Hi all. Just a quick note to say that Miley and I have recently separated and I wish her nothing but health and happiness going forward,’ he wrote.

‘This is a private matter… Peace and Love.’ 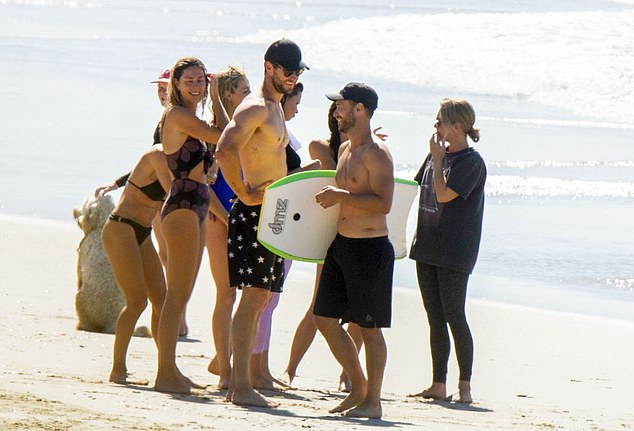 All smiles: Chris was seen chatting to a friend holding a body board, while a group of female friends surrounded the pair