And on Tuesday night, Lianna Perdis looked every inch the glamourous model when she emerged from a jet to mark her father’s makeup brand being stocked in Priceline Pharmacy stores.

Making a high-flying entrance, the 18-year-old heiress turned plenty of heads in a nude latex dress which clung to her petite figure, teaming the look with matching thigh-high boots.

Thigh’s the limit! Lianna Perdis looks every inch the glamourous model in a nude latex frock and sparkly over-the-knee boots as she emerges from a private jet for her father Napoleon’s launch party

Proving that she’s not shy, Lianna made her way down the stairs of the jet as if they were they own personal runway, before posing next to the aircraft.

Complementing her look, Lianna opted to wear her long-blonde hair out and in waves for the high-fashion event.

Lianna opted to complement her flawless complexion with a bright shade of lipstick and a smokey eye. 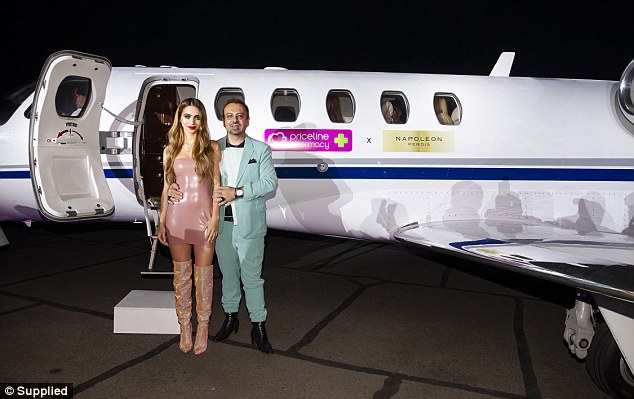 High glam! The make-up heiress posed by the jet with her famous father, Napoleon (pictured)

Also at the ritzy event was her father Napoleon, along with her mother Soula-Marie and her triplet sisters, Angelene, Alexia and Athina, all 16.

Earlier this year, fashionista Lianna announced she would be leaving Greece in order to return to Australia to undertake a degree at Macquarie University.

‘Coming back to Australia for uni studies is very exciting,’ Lianna told The Daily Telegraph in July. 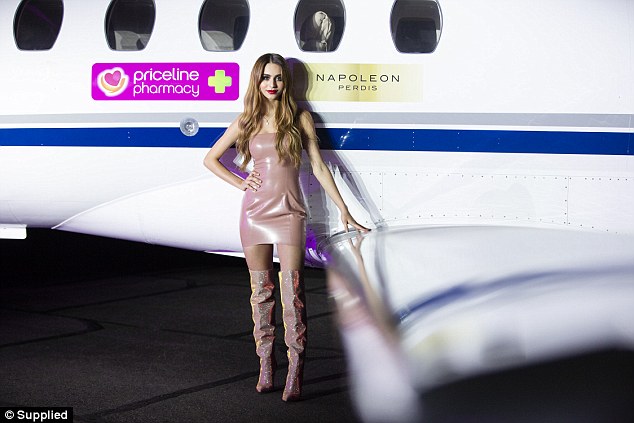 Striking a pose! The glamorous model, who recently returned to Australia from Greece in order to undertake her studies at Macquarie University, turned plenty of heads at the event

Earlier this month, Lianna completed high school at The American College of Greece – however it wasn’t the only campus she’s studied at.

‘Between Australia, LA and Athens I changed schools four times, eventually graduating with an IB diploma,’ she told the publication.

Lianna, who is just starting to make waves on the fashion scene, has spoken candidly of her close relationship with her father.

‘I am in the position that I am today because of him,’ she told The Daily Telegraph in November last year.

Lianna said of her father’s legacy: ‘I do understand that it can be hard to separate yourself sometimes from your father and carve out your own niche.

‘But I am my father’s daughter and I am in the position that I am today because of him and I can’t neglect that.’ 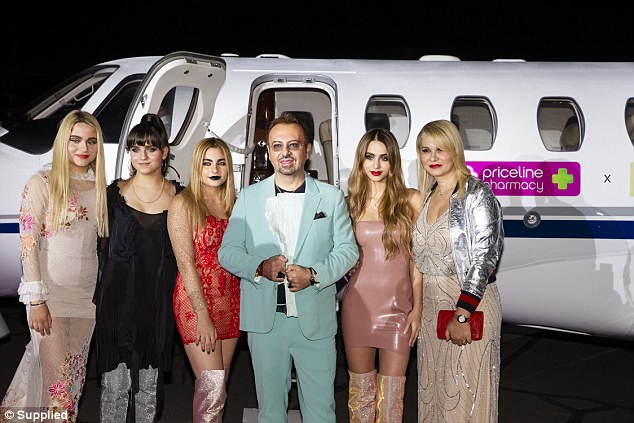 Family! At the event, which marked Napoleon Perdis make-up going into Priceline pharmacies, the model was surrounded by her parents and sisters Angelene, Alexia and Athina