Jo Swinson has been elected as the first ever female leader of the Liberal Democrats after she inflicted a crushing defeat on her challenger Sir Ed Davey.

Ms Swinson will succeed Sir Vince Cable after she secured more than 47,000 votes in the contest with Sir Ed trailing fair behind on just over 28,000.

A total of 106,000 ballots were issued in the contest with approximately 76,000 Lib Dem members bothering to vote – a turnout of 72 per cent.

Ms Swinson said her ‘number one priority’ as leader will be ‘stopping Boris and stopping Brexit’.

Ms Swinson and Sir Ed, both former ministers, have been battling it out for seven weeks for the right to take over the surging party following Sir Vince’s decision earlier this year to stand down.

The winner of the contest takes over with the party at a high point in its recent history. 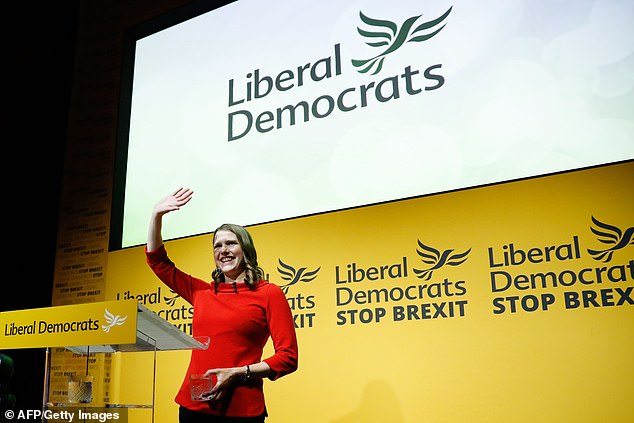 Ms Swinson, the East Dunbartonshire MP, was the favourite in the two-horse race to replace Sir Vince 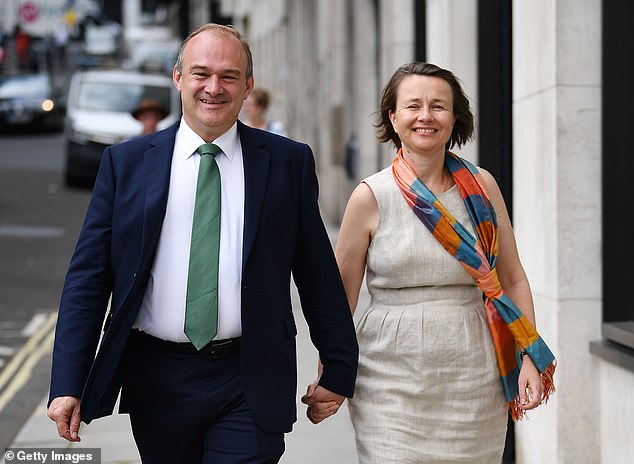 Sir Ed Davey, pictured today with his wife Emily Gasson before the leadership announcement, served as energy secretary in David Cameron’s coalition government. He was viewed as the underdog in the Lib Dem leadership race

Ms Swinson told activists after the announcement was made: ‘When I joined the Liberal Democrats at 17, I never imagined that I would one day have the honour of leading our great party.

‘I want to pay tribute to Ed for giving us the robust but friendly contest our members deserve. Ed is a great friend and a superb politician, and will have a crucial role to play in our team.

‘I also want to thank Vince Cable for the leadership he showed in taking our clear stop Brexit message to voters, which led to our best ever set of local and European election results.

‘Tomorrow, Boris Johnson is likely to take the keys to Number 10 and set us on a path to a damaging No Deal Brexit.

‘Stopping Boris, and stopping Brexit is my number one priority as leader.

‘That job starts with winning the Brecon and Radnorshire by-election to bring Jane Dodds to Parliament, cut Johnson’s wafer-thin majority and take us a step closer to stopping Brexit.’

Sir Vince’s decision to position the Lib Dems as a ‘Stop Brexit’ party led to much better than expected results at the local elections and then the European Parliament elections.

The Lib Dems finished the latter in second place as many Remain voters gave the party their support while the results in the former were the party’s best ever.

The party has translated that ballot box momentum into a surge in Westminster voting intention polls with the Lib Dems even topping some surveys as the Tories and the Labour Party have struggled.

The party’s fortunes have also been boosted by the implosion of Change UK and the defection of Chuka Umunna.

It now has 12 MPs and will be hoping for a general election as soon as possible in order to capitalise on anti-Brexit sentiment.

East Dunbartonshire MP Ms Swinson was the bookmakers’ favourite in the race and has served as Sir Vince’s deputy since June 2017.

Ms Swinson has suggested that if Boris Johnson enters Number 10 and is committed to Brexit on October 31 with or without a deal then the Lib Dems could be boosted even further.

Sir Ed has previously suggested that a government of national unity led by a Labour backbencher could be a way of stopping a prime minister intent on a No Deal Brexit.

Sir Vince Cable stands down as leader after two years in charge, having taken over the running of the party in July 2017. 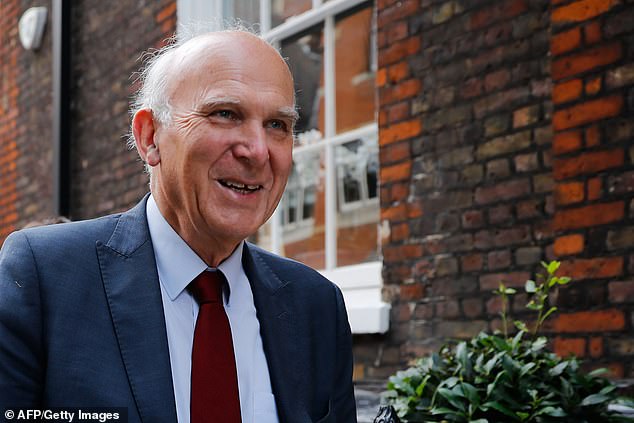 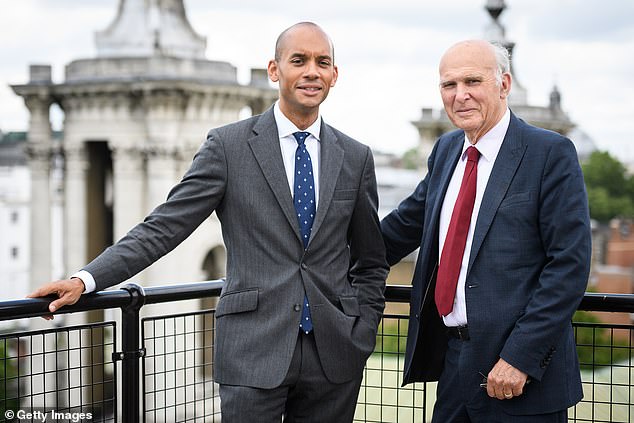 Sir Vince wrote to party activists in May to announce his intention to stand down.

He told the party’s rank and file: ‘There are major challenges ahead. One is to win, finally, the battle to stop Brexit.

‘Our campaigning has given hope; now we need to secure a referendum in Parliament, and then win it.

‘Another is the opportunity created by the conflict and decay within the two main parties to build a powerful, liberal, green, and social democratic force in the centre ground of British politics.

‘We are now in an excellent position to lead such a movement’.

Before the leadership announcement was made, Ms Swinson paid tribute to Sir Vince.

She said: ‘Before we find out who will lead Lib Dems next, I want to thank Vince Cable for all that he has done as our Leader over the last two years.

‘He has been the voice of reason in unreasonable times & led our party to our best ever local & European election results. Thank you, Vince.’