A Liberal Democrat peer faces a furious backlash for warning post-Brexit Britain could be ‘reminiscent’ of Nazi Germany.

Lord Greaves also claimed people were crying themselves to sleep at night over the UK’s withdrawal from the EU, as he warned against ‘triumphalistic behaviour’.

It drew gasps in the chamber, with peers complaining that he was ‘stretching the point’ and had gone ‘too far’.

Lord Greaves said there were many people people in the country ‘full of dismay and distress’ over the break with Brussels.

During a debate last night, Lord Greaves claimed people were crying themselves to sleep at night over the UK’s withdrawal from the EU, as he warned against ‘triumphalistic behaviour’

As some Conservative Tory peers signalled their dissent, he continued: ‘People are crying when they go to sleep at night and when they wake up in the morning, and all they get from the unfeeling, hard-headed Tories is moans.

‘They are feeling a sense of loss which is akin to bereavement and a grieving process has only just begun.’

Lord Greaves said: ‘In these circumstances, triumphalistic behaviour, festivals of Brexit and all the rest will simply make things worse.

‘The people who are feeling it worst are those citizens of the EU who live, work and take part in our communities.’

He went on: ‘I am particularly concerned about what the Government is doing about prevention of discrimination in the transition period.

‘I am fearful that on January 31 some things may happen in some places which could be reminiscent of things happening in Germany in the early 1930s.

‘I am worried about this, because there is that sentiment amongst a hostile minority of the population.’

But challenging him, Brexit-supporting Labour peer Lord Grocott said: ‘He’s just made a comparison, I’m slightly reeling from it, between Britain on February 1 this year and Nazi Germany in 1933.

‘Could he elaborate on that just a little bit, because that seems to me to be stretching the point just a bit?’

Responding, Lord Greaves said: ‘Well, we will see. What we do know is that the day after the referendum people had their windows put in. People were abused in the street. Paint was daubed on people’s houses. It’s that kind of thing I am talking about.

‘I know of plenty of instances where people have been abused in the street and shouted at.’ 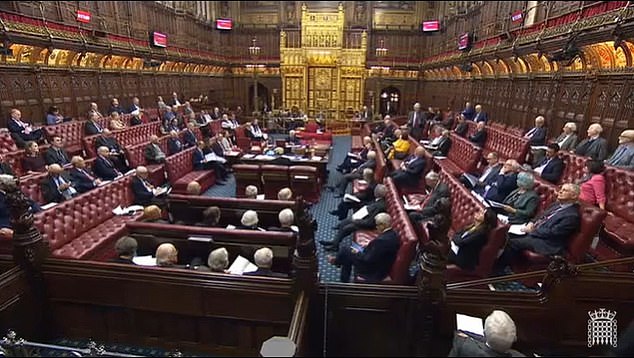 He added: ‘It happened immediately after the referendum and I am very worried indeed that on February 1 and 2 there will be a wave of this kind of thing.

‘Police statistics show that the amount of racially-motivated offences has increased significantly since June 2016. I am not making it up. It is happening.’

Home Office Minister Baroness Williams of Trafford said: ‘To compare January 31 to Nazi Germany, I think, is rather a step too far.’

But Lord Greaves said: ‘I have not compared this country today with Nazi Germany and would not do so obviously, it would be ridiculous.

‘You can think that’s right, you can think it’s wrong, but I believe that that is the case.’