Excruciating moment white Liberal MP confuses a rival candidate with a DIFFERENT Asian-Australian politician: ‘Do we all look alike to you?’

A Liberal MP has appeared to confuse her rival Labor candidate with another Asian-Australian politician, sparking calls for her to apologise.

Liberal Member for Reid Fiona Martin faced off with Labor’s Sally Sitou during a fiery debate on 2GB Radio on Wednesday.

But things came to an embarrassing halt when Dr Martin accused Ms Sitou of contesting the seat of Reid because she’d been ‘kicked out’ of Fowler by Kristina Keneally.

A visibly confused Ms Sitou later clarified she’d never intended to run for Fowler, with many speculating Dr Martin was actually referring to Vietnamese-Australian Tu Le, who was fighting for preselection for the seat.

‘You found an opportunity and you couldn’t run in Fowler. Kristina Keneally kicked you out of Fowler too,’ Dr Martin said during the debate.

Ms Sitou, dumbfounded by the remark, then said: ‘Now she’s just making things up. That’s how ridiculous this debate has gotten. And I’m really sorry your listeners have had to listen to that.’ 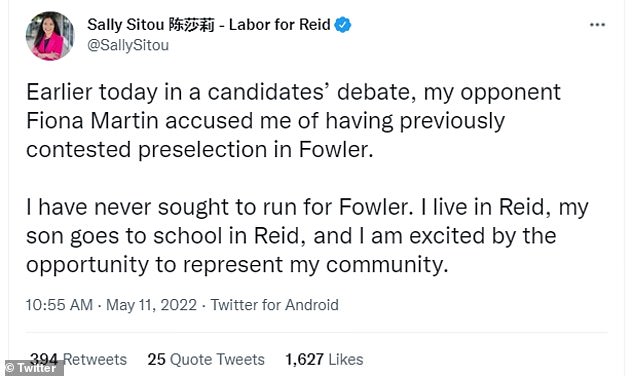 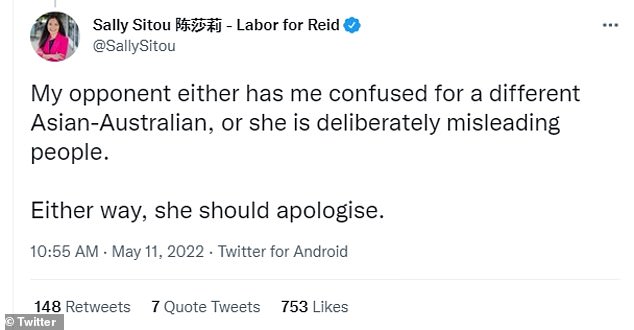 The Labor candidate demanded Ms Martin apologise for her comments

‘Earlier today in a candidates’ debate, my opponent Fiona Martin accused me of having previously contested preselection in Fowler,’ she said.

‘I have never sought to run for Fowler. I live in Reid, my son goes to school in Reid, and I am excited by the opportunity to represent my community.

‘My opponent either has me confused for a different Asian-Australian, or she is deliberately misleading people. Either way, she should apologise.’

There have been more calls for Dr Martin to apologise with Ray Hadley also saying she needed to address the mishap.

One voter tweeted: ‘Did she confuse her with Tu Le as all Asians literally look alike to her? She must apologise immediately’.

Dr Martin told SBS News she was ‘referring to media reports that Ms Sitou was in the running for the state seat of Cabramatta in 2018’.