Sales at the budget chain leapt 18.9 per cent in the 12 weeks to August 13 compared to the same period last year.

And sales to families are growing 40 per cent faster, with bigger trolley loads, compared to those without children.

Sales at the budget supermarket Lidl leapt 18.9 per cent in the 12 weeks to August 13 compared to the same period last year

The increase is the result of a massive expansion programme with new outlets opening at the rate of one a week.

It is pushing deep into ‘Waitrose country’ by opening in county towns and exclusive areas of Chelsea, Notting Hill, Highgate and even Mayfair.

The rise of Lidl means its market share of 5.2per cent is now marginally ahead of its ‘Middle Britain’ rival on 5.1per cent.

Aldi, which is the UK’s fifth biggest supermarket with a 7per cent market share, is seeing equally spectacular sales growth. 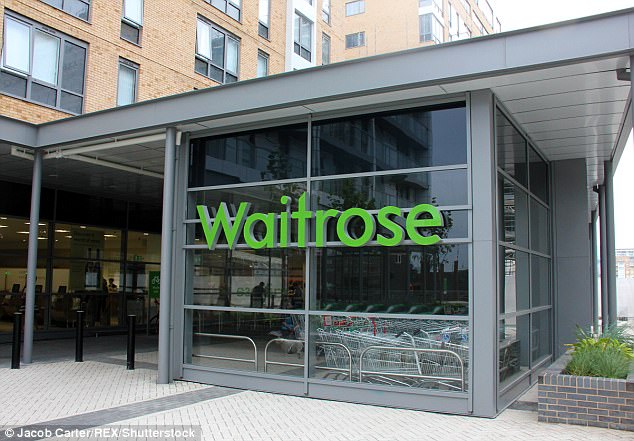 Waitrose has responded to the threat by rethinking the role of a supermarket. This has involved opening wine bars, sushi bars and even upmarket restaurants

Its takings were grew by 17.2per cent as a result of attracting 1.1 million more shoppers through its doors over the 12 weeks compared to a year ago.

Both Lidl and Aldi have made a concerted effort to attract middle and high income households by offering prestige spirits and wine at budget prices.

Earlier this year, Aldi won 25 awards in a competition run by The Grocer magazine to find the nation’s best supermarket own label products. Lidl was in second place with 16.

Waitrose has responded to the threat by rethinking the role of a supermarket. This has involved opening wine bars, sushi bars and even upmarket restaurants.

The chain is also focussing on the provenance of its fresh food all the way to the farm and fishing boats.

Its sales were up by £214m over the 12 weeks compared to a year ago, which continues a record of growth dating back to March 2009 and allowed it to maintain its market share.

‘Lidl is growing sales 40per cent faster with families than with households without children. Families tend to buy more items each time they shop, so strong growth with this demographic has helped Lidl to increase its average basket size year on year.

‘Not far behind, Aldi grew sales by 17.2per cent, attracting 1.1 million more shoppers through its doors than this time last year and increasing market share by 0.8 percentage points to stand at 7per cent.’

Kantar said shop price inflation has increased slightly in recent months to 3.3per cent a year.

Mr McKevitt said: ‘At the current rate, price increases could add a further £138 to the average household’s annual grocery bill, with the price of butter and fish most affected.’

Over half of Britons – 53per cent – admitted to taking cost-cutting measures in the second quarter of this year.

Nielsen’s UK head of retailer and business insight, Mike Watkins, said: ‘The return of inflation and rising concerns about the economy mean the weekly grocery shop is now the most popular target for people to cut down on household expenses.

Nielsen put’s Lidl’s annual sales growth at 20per cent with Aldi on 14per cent. There was also an impressive rise of 6.2per cent for Iceland and 4.8per cent for Marks & Spencer.