Lie back and think of England… outside of the EU: UKIP members snap up £1 condoms

The Nigel Farage condom could feature in bedrooms up and down the country, as members ask their partner to lie back and think of England.

While some may think that such Eurosceptics would prefer the withdrawal method, the party political prophylactics are one of many tongue-in-cheek merchandise offerings on sale at the Birmingham conference. 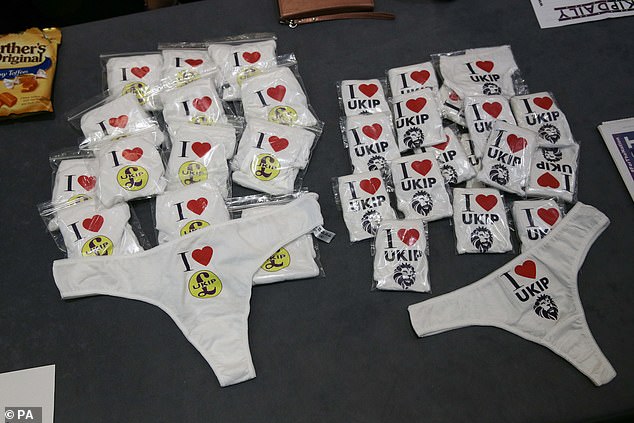 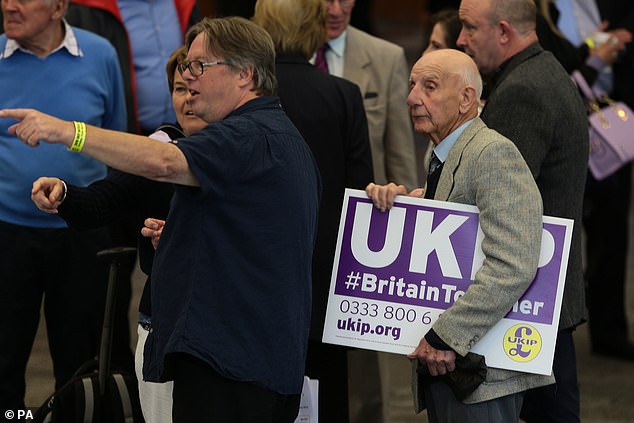 Party members from across the country attended the annual conference, held at the International Conference Centre in Birmingham

The condoms are being sold by the Ukip youth wing, Young Independence (YI), with former leader Mr Farage’s face on the packet, along with the message: ‘For when you have a hard Brexit.’

The YI’s treasurer, Sebastian Cheek, said they were on sale for £1 each or four for £2, because they like a ‘good deal, not a bad deal’. Once again hinting at the stance of the party when it comes to Brexit negotiations.

Also on offer to delegates are items including a Ukip-branded thong and Chequers fudge, on stalls outside the hall at the International Convention Centre. 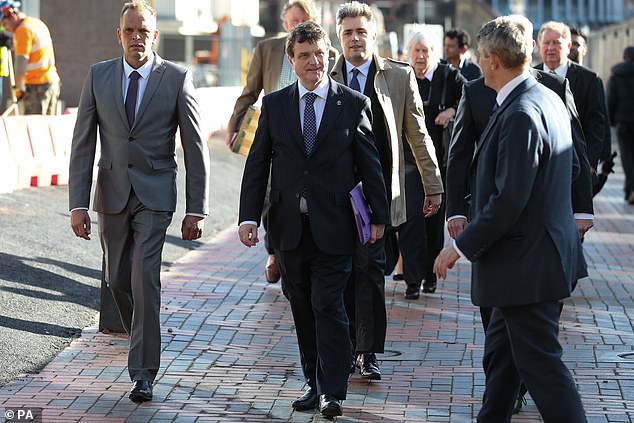 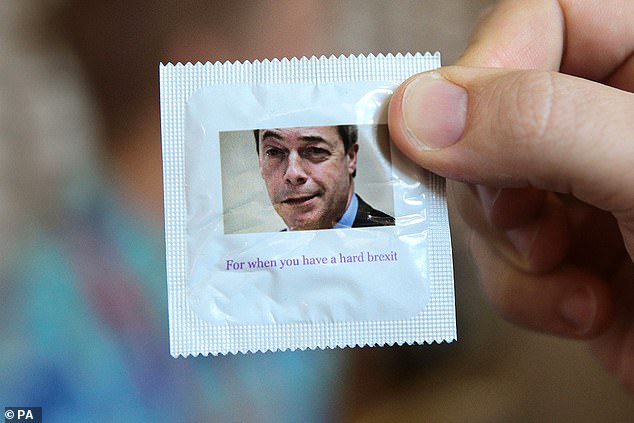 The Nigel Farage condom could feature in bedrooms up and down the country, as members ask their partner to lie back and think of England 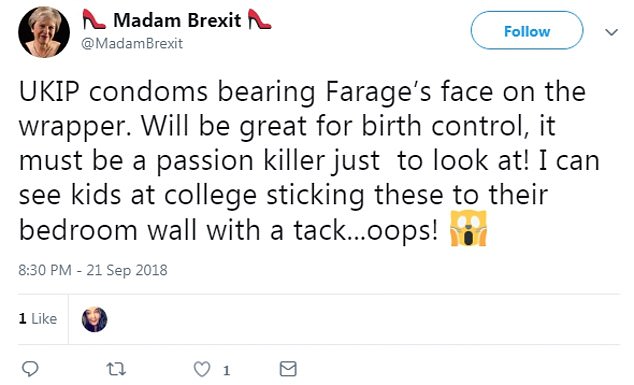 Thongs were on sale branded with ‘I love Ukip’ across the front on the party’s Northern Ireland branch stall for £3.

The ‘genuine unofficial’ Chequers fudge was available in several flavours alongside a tea towel with a recipe for the delicacy consisting of ‘one part hypocrisy and one part appeasement, mixed in an unpalatable way’, for £7.

Speaking to the Press Association at lunchtime on Friday, he said: ‘We have been here since around 10.30am and an entire box of 100 condoms has been sold. They have been selling extremely well.’

Some people welcomed the condoms, such as @CAdamMartin who said ‘anything that stops UKIP breeding’

The response from users on social media has been huge, and one Twitter user, Nick Durrant said ‘why would you need a condom if you’re going it alone?’

Asked what Mr Farage might think, he added: ‘I don’t think Nigel would mind because he is one for saying let’s laugh at ourselves. I don’t think he would be offended.’

However, campaingers have said that Farage has nothing to do with the stunt, which has received raised eyebrows from many on social media, with some calling the merchandise ‘the ultimate mood killer’.

One user, Nick Durrant tweeted: ‘I thought UKIP wanted independence! So why would you need a condom if you’re going it alone? ‘ 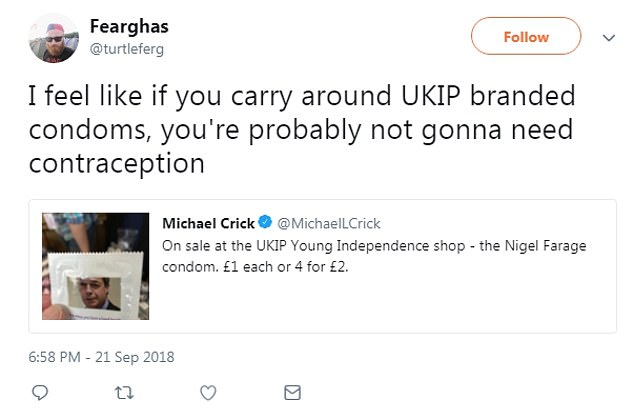 @turtlegerf said ‘I feel like if you carry around UKIP branded condoms, you’re probably not gonna need contraception’ 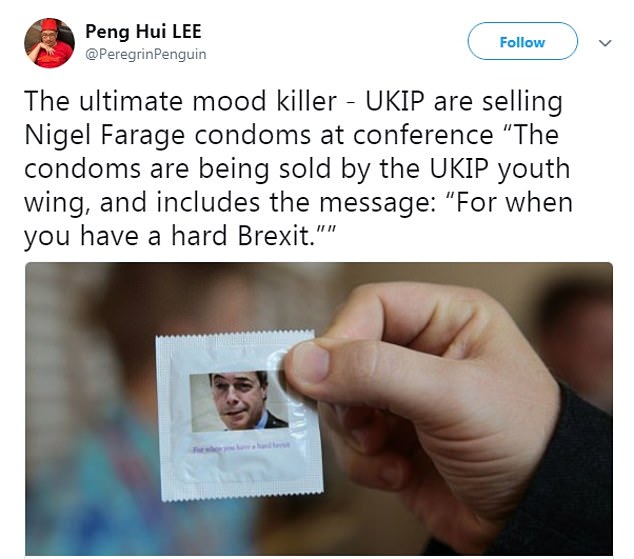 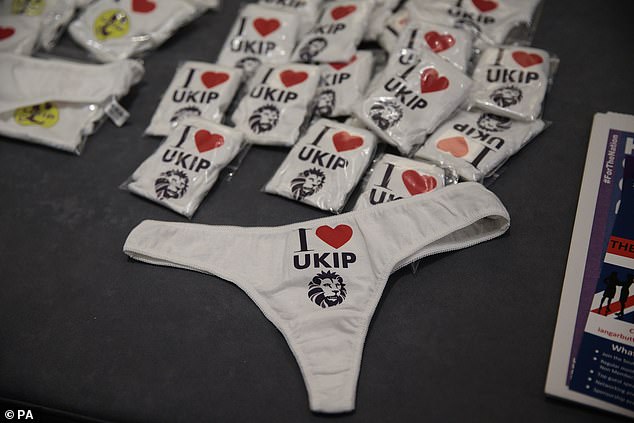 The merchandise also sported the logo of the party, along with the love heart emoji

This is while Penn Hui LEE said: ‘The ultimate mood killer – UKIP are selling Nigel Farage condoms at conference.’

Elsewhere @turtleferg said: ‘I feel like if you carry around UKIP branded condoms, you’re probably not gonna need contraception.’

The conference hopes to revive Ukip’s dwindling political influence at the annual party get-together. Its popularity collapsed following the 2016 vote to leave the European Union and several attempts to replace Farage as leader.

Farage remains a Ukip member but has tried to steer clear of the limelight to allow the party to develop a new identity. 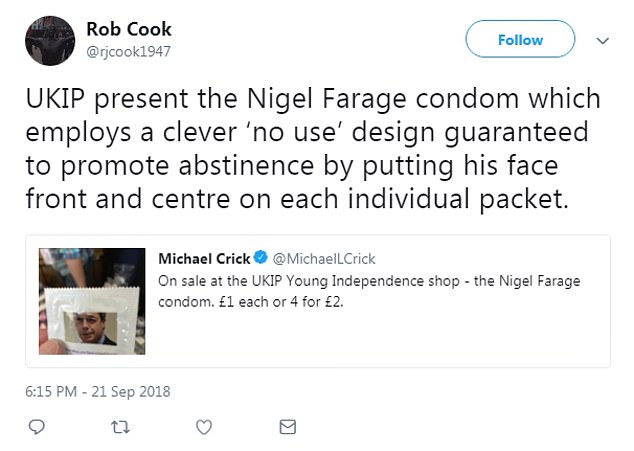 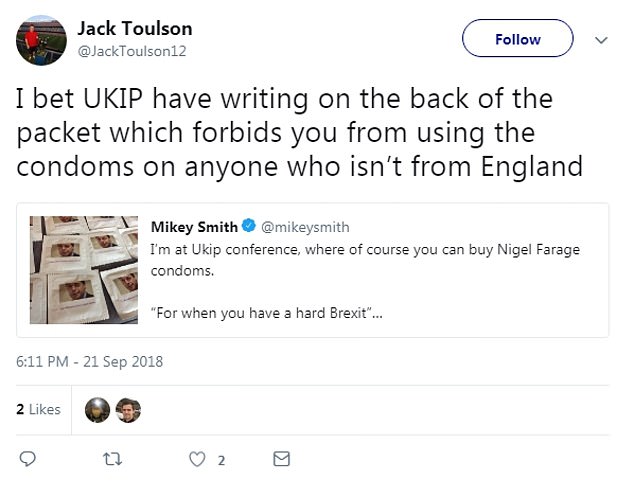 Jack Toulson tweeted: ‘I bet UKIP have writing on the back on the packet which forbids you from using the condoms on anyone who isn’t from England