While boys born in the same period can expect to live 58 days longer than those from between 2013 and 2015, to 79 years and three months.

Boys’ life expectancy last year got 3.7 weeks longer while girls’ jumped by 4.2 weeks, which one expert told MailOnline was ‘grounds for optimism’.

But longer term trends show big gains made in the 2000s, 1990s and 80s are not being matched, with some arguing government austerity measures are to blame.

Today’s figures also showed that although the number of people living into their 90s is increasing, fewer people are living to the age of 100, which experts suggest may be down to low birth rates during World War I.

Life expectancy for both men and women has improved significantly for the first time since 2014, figures show (between 2016 and 2018 the life expectancy at birth for girls rose by 4.17 weeks and for boys it rose by 3.65 weeks), but long-term progress is slowing down

‘National life tables’ released today by the Office for National Statistics revealed the changes in the life expectancy of people living across the UK.

Last year’s rise marks a return to improvements in longevity.

The 2015-2017 data showed children born then were not likely to live any longer than those born in the years before, with men registering an expectancy increase of just a few days and women nothing at all.

NUMBER OF CENTENARIANS SLOWS ‘BECAUSE OF WORLD WAR I’

The number of people aged over 90 has risen slightly, but fewer are living to 100 or beyond, today’s figures suggest.

Men drove the increase, with a 2.8 per cent yearly rise in the number of men aged 90 and over.

It said the low number of births during World War One fuelled this drop, but there is expected to be a big jump in the number of centenarians in the coming years.

This is because, following the return of soldiers after the First World War, the number of births spiked in the latter half of 1919, around nine months after the war ended.

‘Between 2016 and 2018 we have seen much lower increases than experienced in previous decades. Nevertheless, life expectancy is still increasing.

A potential cause for the slowdown, one expert suggested, could be the impact of Government austerity measures introduced after the Conservatives took power in 2010.

Professor Sir Michael Marmot, a renowned public health expert and professor at University College London, told MailOnline: ‘What the latest figures show is a hint of encouragement – which is always grounds for optimism – but, in essence, the slowdown in improvement in life expectancy which began in 2011 has continued.

‘We had a new government elected in 2010 and that has led to speculation about whether policies of austerity have led to the changes. It’s a question we must ask and worry about, and I’m open to the possibility that it might have.

Sir Michael said government cuts may be impeding efforts to help people live healthier lives, and that social conditions such as early child development, education, working conditions and the environment must be in good shape before people’s health can be.

Smoking and obesity, for example, are known to be higher in more deprived areas and among families with lower incomes.

‘Improvement in smoking has been terrific… and we’ve got great advances in public health more broadly,’ Sir Michael added.

‘I think of an unhealthy lifestyle as a consequence of social conditions.’

David Sinclair, director of the International Longevity Centre UK think-tank said: ‘There is no simple answer to why life expectancy growth is moving at a slower pace than a decade ago.

‘Some argue government austerity or the social care crisis are to blame, others point to a slowdown in improvements to certain age-related diseases.

‘But underneath these headline rates lies another much deeper and more urgent scandal – the vast inequalities in life expectancy. The most deprived group of men live nine fewer years than the least deprived. And despite living less long, this group spends more time in poor health.’

‘The reality is, the Government remains woefully unprepared for ageing. And we aren’t doing enough to tackle inequalities in life expectancy and healthy life expectancy.

‘Our social care system is failing older people whilst younger people are saving too little for old age. A growing older population ought to be good news for individuals and society – but to realise that the Government must invest more in tackling inequalities.’ 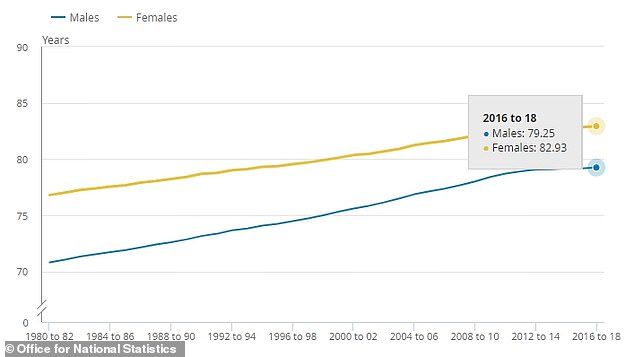 The average life expectancy at birth for boys in the UK is now 79.25, and for girls it’s 82.93. The figure has been steadily increasing, but at a slower rate than other comparable countries such as Estonia, Norway and Slovakia, which saw some of the biggest rises between 2011 and 2017

Life expectancy improvements are slower in the UK than in many other comparable countries, the ONS data show.

Estonia, for example, had the biggest increase between 2011 and 2017, with men’s lives getting 21 weeks longer and women’s 13 weeks.

In the UK in the same time frame, men’s rose by just eight weeks and women’s by five.

For Norway this was 15 weeks for men and eight for women – and Norway has consistently had a higher life expectancy and better improvements than the UK, rubbishing the idea we may have hit a ceiling.

The US fared even worse, improving by only 0.007 weeks for men – less than a day’s improvement over six years – and one week for women.

‘Our longer lives are an incredible gift and open up huge opportunities for individuals and society,’ said Dr Aideen Young from the Centre for Ageing Better charity.

‘It’s great to see that the number of people reaching 90 and 100 is increasing.

‘But we mustn’t be complacent. Life expectancy remains lower in less well-off parts of the country, and many people in their 50s and 60s now, particularly those who are less well-off, simply won’t reach these older ages.