French police have come under intense criticism for watching scores of migrants leave the shores of Calais ‘unchallenged’, after more people successfully made the perilous journey across the English channel on Saturday.

At least 40 migrants, including a baby who was less than a month old, were picked up off the coast after a small boat crossing off the coast of Dungeness, Kent today. 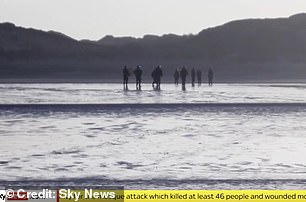 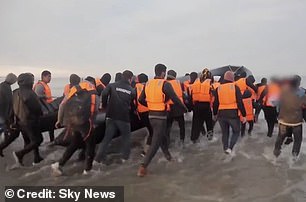 Armed French police officers (left) watch on from 100 yards away as scores of migrants (right) begin their perilous journey across the English Channel in Calais, France

Among those who survived the perilous journey was a 16-day-old girl from Iraq, who was pictured on the rocky beach cradled in white blankets in the arms of a Border Force official.

It comes as footage broadcasted on Sky News this week showed migrants leaving Calais unchallenged by armed police – in what is likely to be a fresh blow to Anglo-French relations.

Dozens of people were seen piling into inflatable rafts, dinghies – and even a canoe – in their desperate bid to make it across the English Channel, with French security ‘stood by and watched’.

Less than three months ago, the UK agreed to hand France an extra £54m in a bid to curb the record-breaking number of migrant landings.

A the Tory annual conference earlier this week, Home Secretary Priti Patel described France as a ‘safe country’ and reiterated her desire to ‘turn back the boats’.

After evading French security at first light, the migrants piled into dinghies and spent nine hours crossing the English Channel, before they were picked up by immigration officers this afternoon. 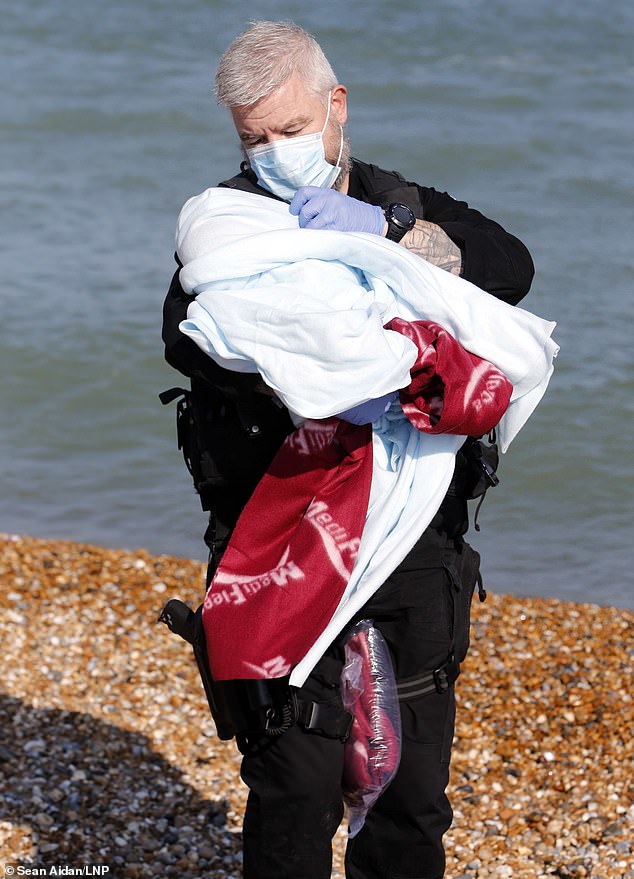 A 16-day-old girl from Iraq is pictured on the shores of Dungeness, Kent after being rescued by Border Force 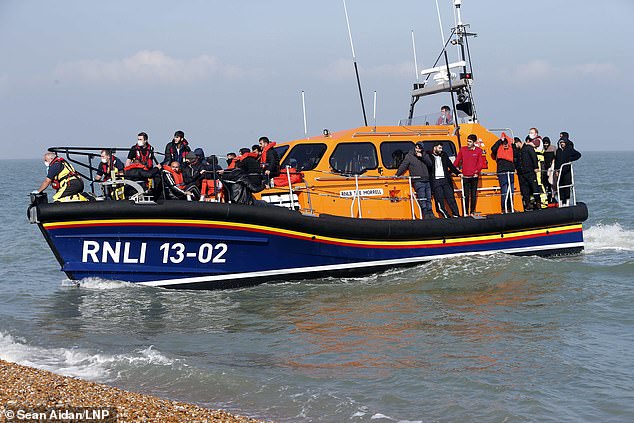 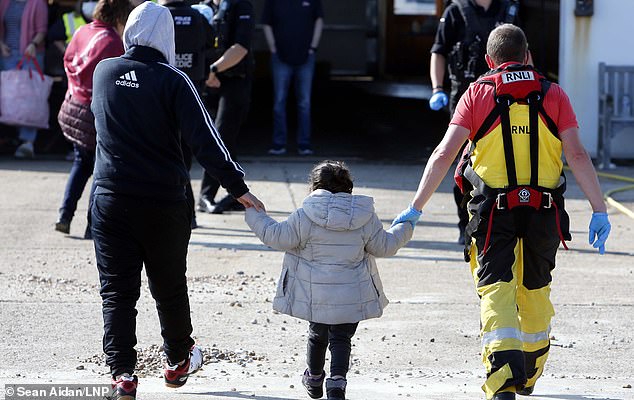 After evading French security at first light, the migrants piled into dinghies and spent nine hours crossing the English Channel, before they were picked up by British immigration officers this afternoon

Ruthless people smugglers have taken advantage of the warm start to October, with a recent surge in successful crossings reported across Kent in the past week.

But Sky News has reported French security ‘stood by and watched’ the scenes of chaos unfold from less than 100 yards away instead of intervening.

A group of approximately 10 officers allegedly stood idle as two separate groups of migrants piled onto inflatable boats that took up to 10 minutes to get their engines started.

Home Office blew £6,757 in a month at Domino’s in Dover for migrants who had crossed the Channel

The Home Office spent £6,757 in one month on Domino’s pizzas to feed migrants arriving in the UK after crossing the Channel from France, figures show.

Hundreds of pizzas were bought from the Dover branch of the fast food chain in July, according to analysis of the government department’s spending.

The takeaways were provided while migrants were at Tug Haven – a short-term holding facility in Dover where they are first taken from the beach or sea.

The most expensive entry – £1,824 – said: ‘This was an urgent need to feed a large number of migrants that had been on the Tug Haven compound in Dover for over 12 hours, and were likely to stay over 24 hours due to issues blocking their movement with resources and the Irc (immigration removal centre) estate.’

An entry for £1,789 said: ‘Purchased by Clandestine Operational Response Team (Cort) for use at Tug Haven where we have migrants arriving on small boats. Due to the high number of migrants arriving and the length of time they had not eaten, it was agreed to purchase 200 pizzas.’

It came as more crossings were under way on Friday, with at least six boats arriving at Walmer and St Margaret’s in Cliffe, Kent, according to eyewitness reports.

In a later clip, a helicopter flown by French border control flies over the Strait of Dover, watching on as another caravan of migrants makes the treacherous journey.

French officials are said to be investigating patrol efforts on the French border in the wake of the footage, Sky News reports.

Since the start of the year, more than 17,000 migrants have succeeded in reaching the UK – double the figure for the whole of 2020.

Dan O’Mahoney, clandestine channel threat commander for Border Force, said: ‘The government is determined to tackle the unacceptable rise in dangerous Channel crossings using every tool at our disposal, at every stage in the journey.

‘Working with police and international partners, this year there have been nearly 300 arrests, 65 convictions related to small boat criminality and our targeted efforts have prevented more than 13,500 migrant attempts.

‘But this is a complicated issue requiring changes to our laws.

‘The Government’s New Plan for Immigration provides a long term solution to fix the broken system and deliver the change required to tackle criminal gangs and prevent further loss of life.’

It comes after September was the busiest month on record, with Dover receiving four times the amount of migrants compared to September 2020.

Official statistics showed more than 3,872 have arrived in 113 incidents last month – breaking the 3,509 who made the dangerous journey in 117 boats in July.

And officers have now detained at least 17,228 migrants crossing the English Channel in small boats so far this year, more than double the record number who made the treacherous crossing in all of 2020.

The Home Office has been contacted to provide comment.

Last year, inspectors found that migrants ‘almost always’ arrived wet and cold and then ‘often had to spend hours in the open air or in cramped containers’.

This comes just days after Home Secretary Priti Patel in the Conservative party conference committed to reducing the number of channel crossings.

She said: ‘The shocking images of people crammed into flimsy boats, exploited by people smugglers, vile criminals, characterized by ruthlessness and greed who even threatened to drown small children just to line their pockets.

‘This can not continue, this is why we are going after the criminals behind this perilous trade of people smuggling.’