The heatwave that saw Britain enjoy a blazing Bank Holiday weekend will come to an abrupt end today as storms swept across the country last night.

Tuesday saw the mercury rise to 91F (33C) for a third day in a row in southern England, but glorious summer conditions won’t continue across the country and thunderstorms have already swept into northern and eastern parts of the UK.

The Met Office has warned of up to 2.4in (60mm) of rain, along with a chance of flooding, hail, lightning, strong winds, damage to buildings, communities cut off and power cuts.

Forecasters also say there could be train delays and difficult driving conditions for motorists as nearly a month’s worth of rain falls in some eastern areas – with England’s August average at just 2.7in (69mm).

It comes after the hottest August Bank Holiday on record on Monday, which provided perfect conditions for scantily clad dancers at the Notting Hill Carnival and was a boon for coastal resorts, parks and outdoor attractions. 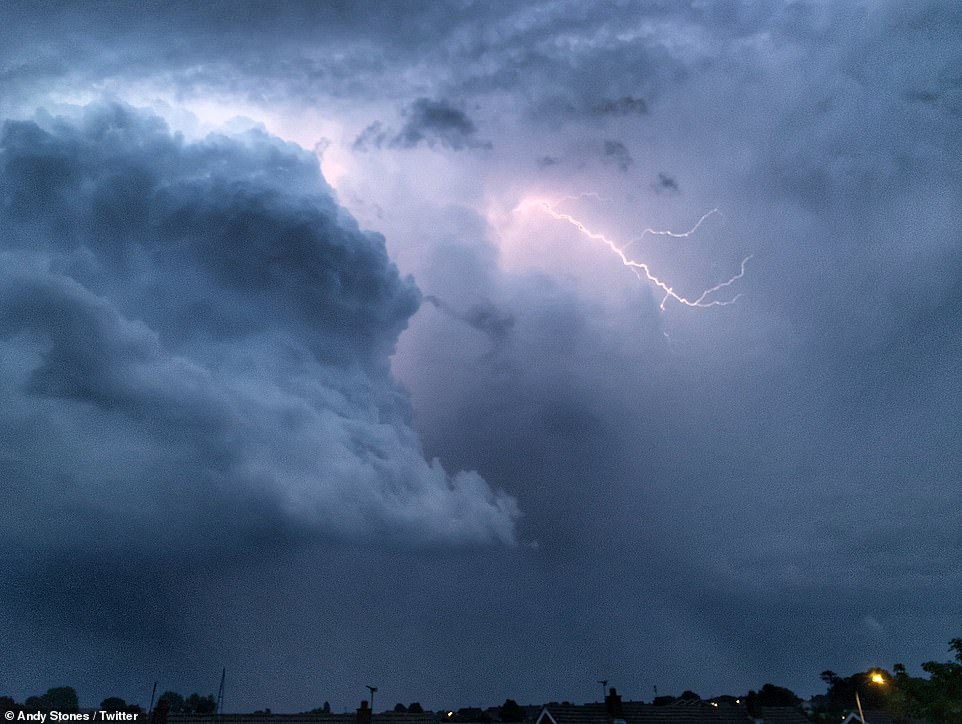 In nearby Scunthrope, lilac lightning shot through blue clouds in stunning images shared by locals 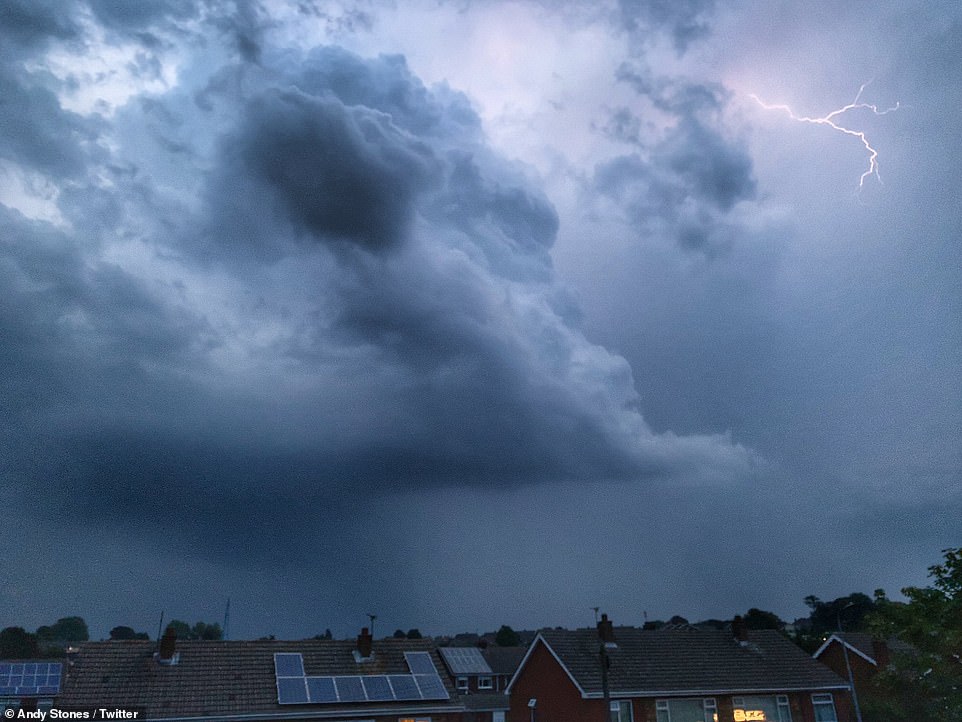 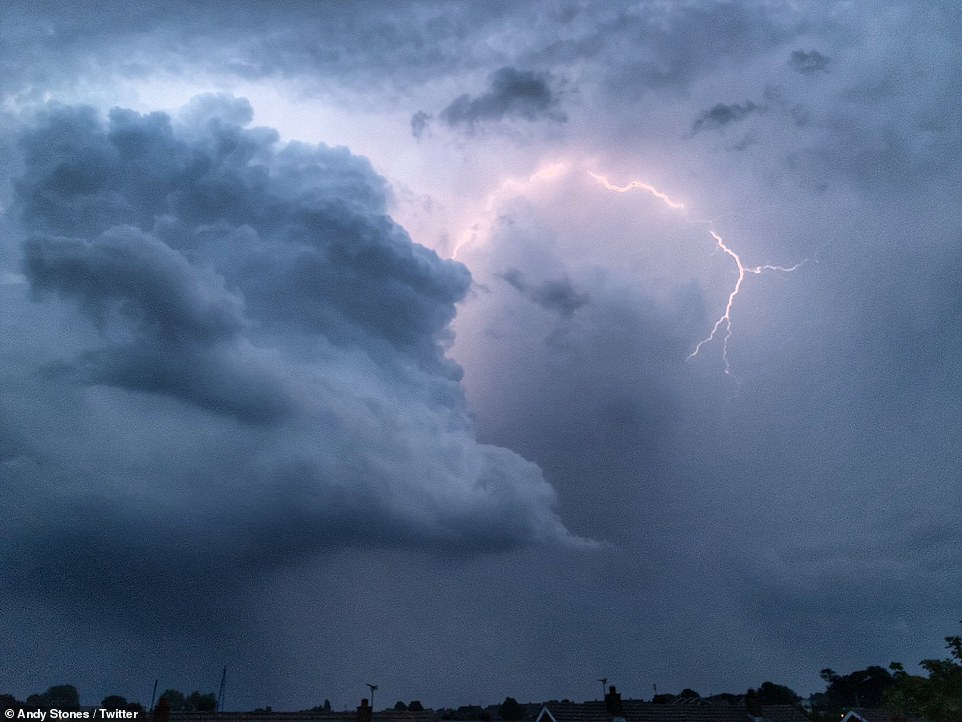 Evening thunderstorms erupted across northern and eastern England as well as eastern Scotland last night, but cleared shortly after dark 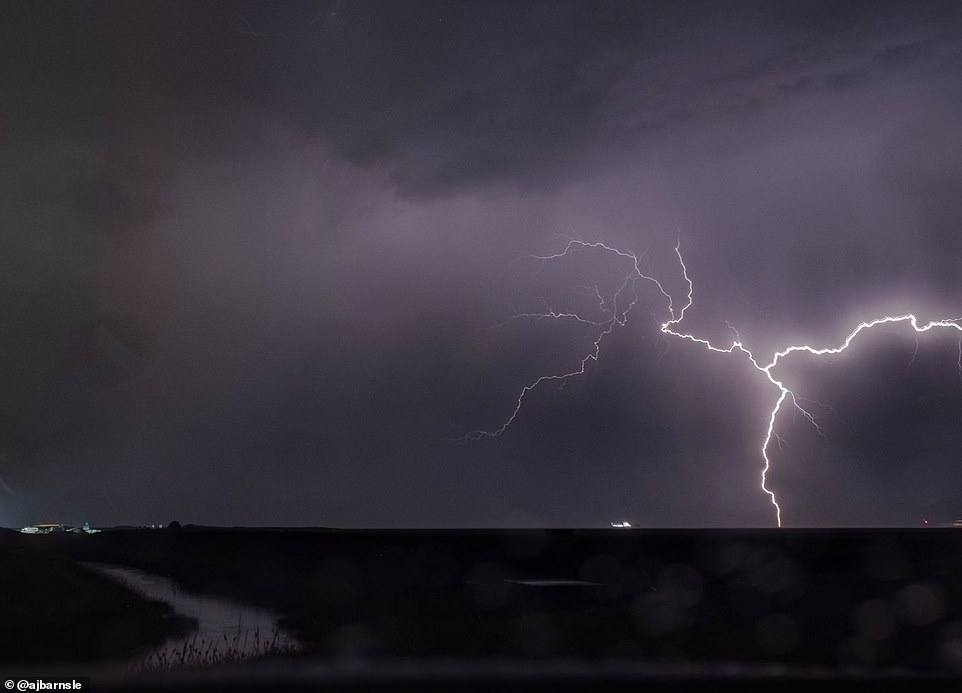 Dramatic storms also passed over the seaside town of Cleethorpes, Lincolnshire, as seen in this photo shared on Twitter 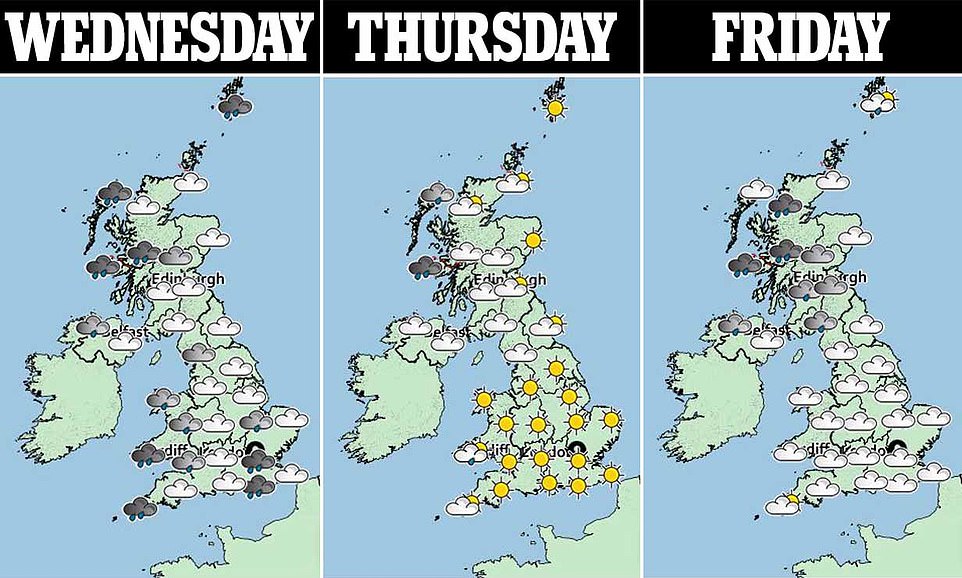 Evening thunderstorms erupted across northern and eastern England as well as eastern Scotland last night, but cleared shortly after dark.

Stunning photos showed purple skies as lightning struck near the Humber Bridge in the East Riding of Yorkshire.

In nearby Scunthrope,  lilac lightning shot through blue clouds in stunning images shared by locals.

Today,  most areas will stay dry, but rain in northwest Scotland will spread further southeastwards.

Southeast England will stay warm and dry throughout the day, hitting a more comfortable 75F (24C) than yesterday.

Rain in the west will move slowly eastwards, reaching southeastern Scotland, northern and southwest England, and Wales by late afternoon.

Tomorrow, will be mostly dry until wet and windy weather arrives in northwest. Rain in the northwest on Friday will spread southeastwards Saturday leaving cooler weather, and strong winds in the north. 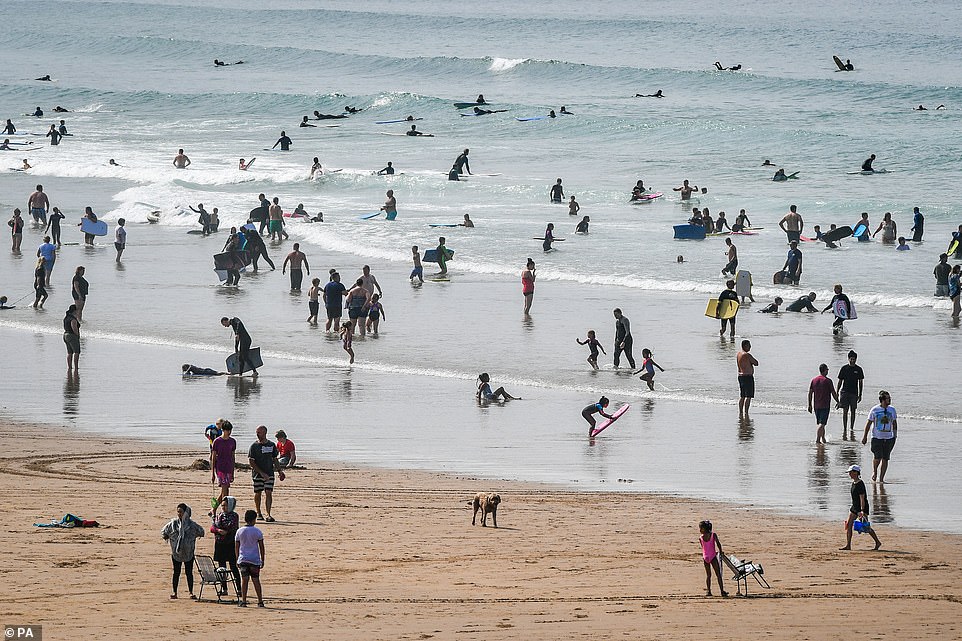 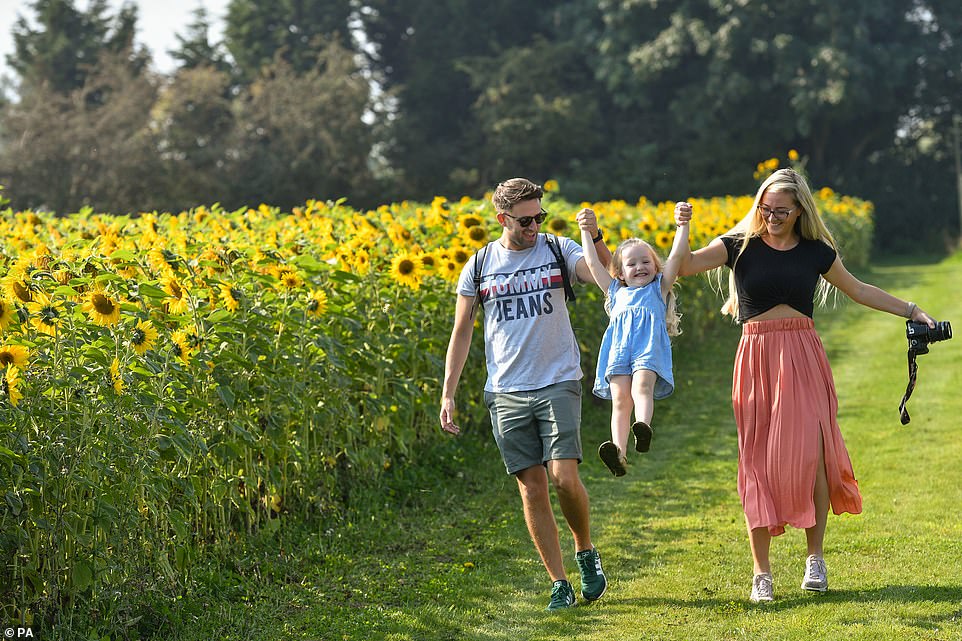 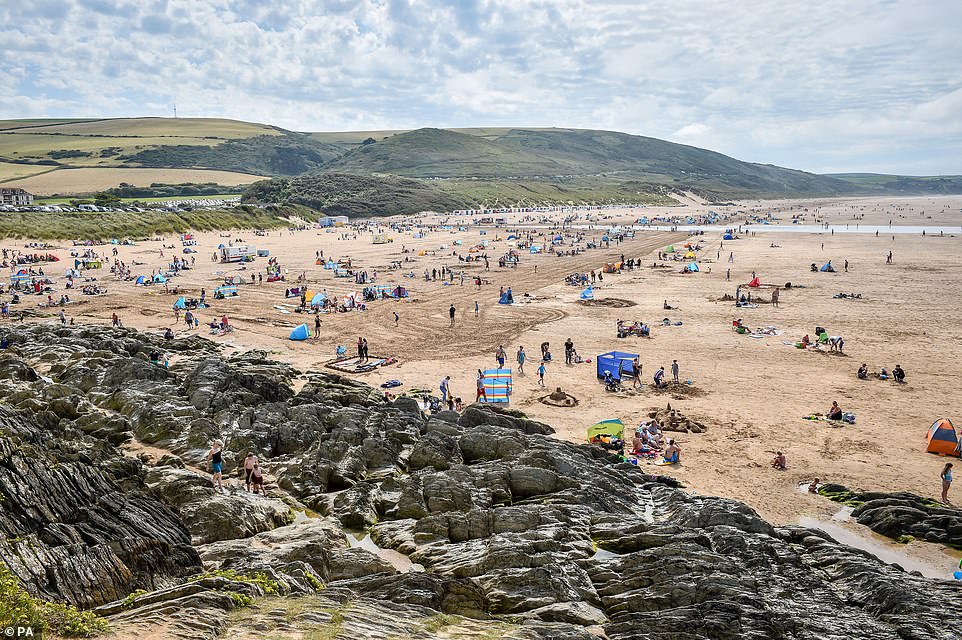 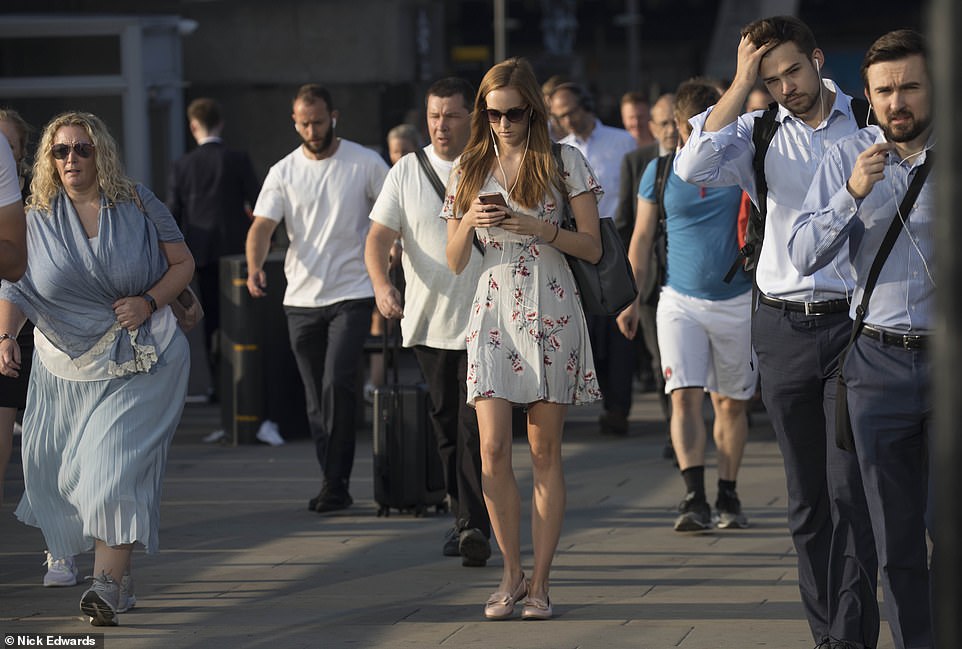 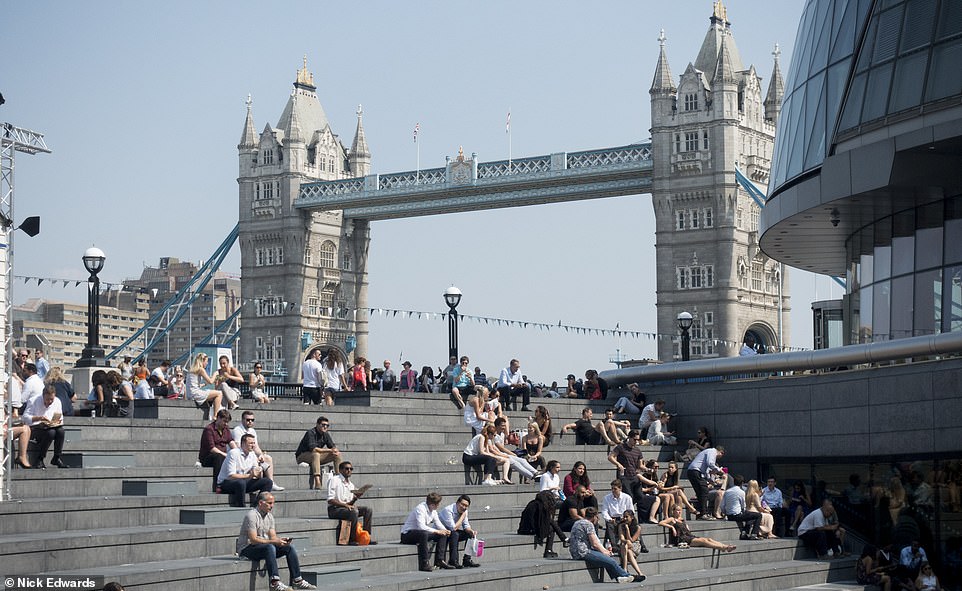 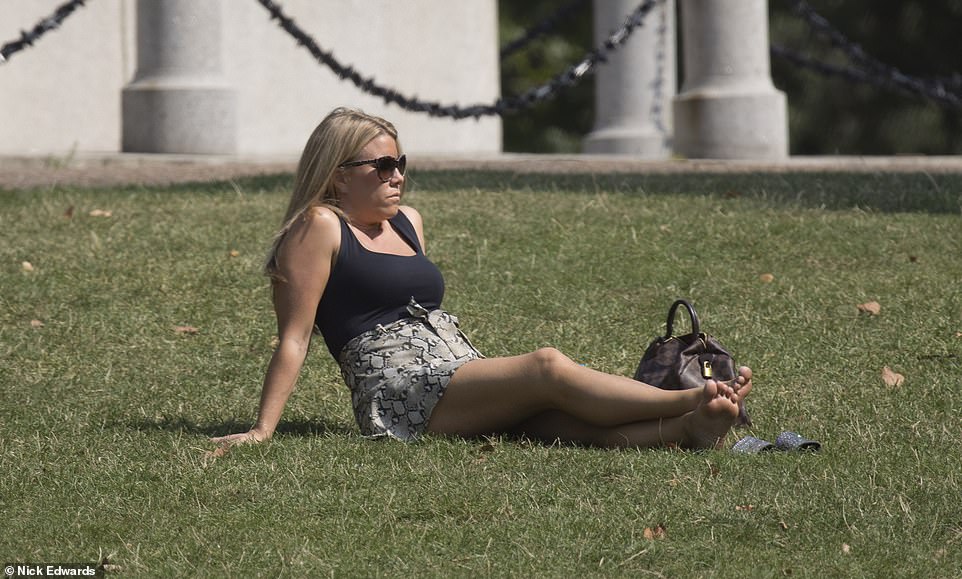 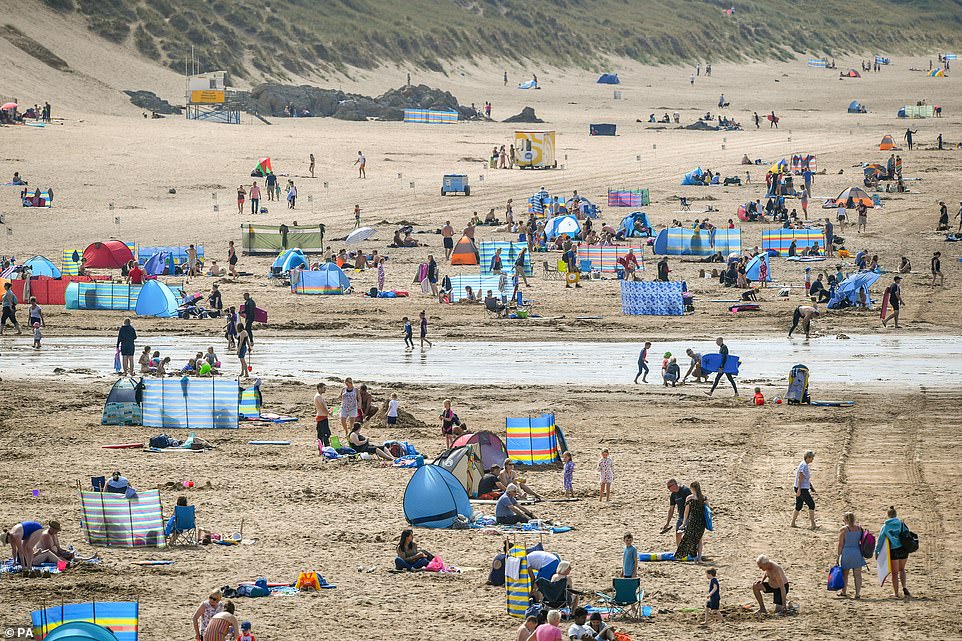 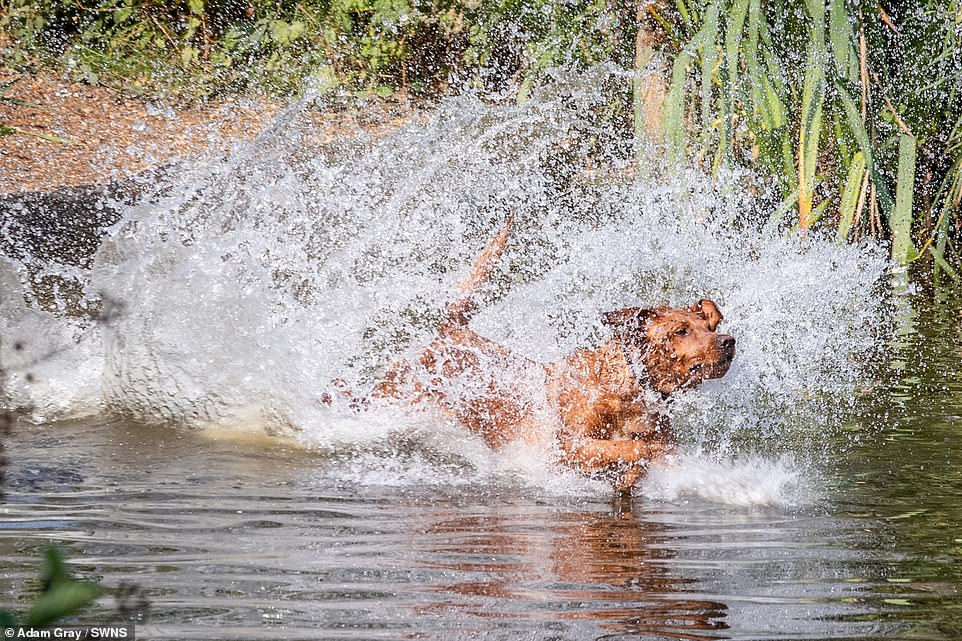 Hudson, a three-year-old Red Labrador, cools down in the hot weather at Highgate Pond in north London yesterday morning 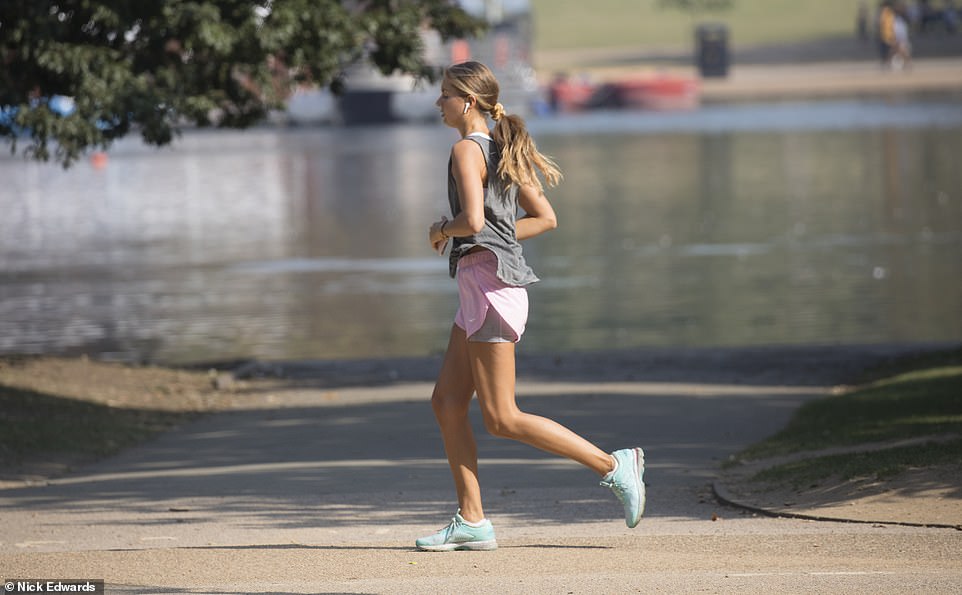 The record for Britain’s warmest August Bank Holiday Monday was shattered at London Heathrow Airport on Monday, where the peak beat the 28.2C (82.8F) record set two years ago in Holbeach, Lincolnshire.

It meant London was hotter than Barbados (84F/29C) and Honolulu (89F/32C). Yesterday, eastern and southern areas of England should see the hottest weather – before temperatures return to 81F (27C) tomorrow.

Another ridge of high pressure is likely to bring mostly fine, dry and sunny weather on Thursday and Friday, although it is set to be cooler and breezy, with temperatures peaking at 75F (24C) in southern England.

The heatwave was enjoyed by thousands of revellers attending the Notting Hill Carnival. Police said they arrested 353 people across both days of the event in London, with almost half the arrests drug-related.

Police were given powers to stop and search revellers after at least 30 officers were attacked yesterday. The Met imposed the Section 60 order, with Commander Dave Musker saying the decision was ‘not made lightly’.

Elsewhere, the fine weather has been a boon for coastal resorts and parks. However, visitors to three Essex towns were told to stay out of the sea after a mystery toxic gas scare left children struggling to breathe.

Police are investigating the incident affecting Clacton-on-Sea, Frinton-on-Sea and Walton-on-the-Naze on Sunday. One mother on a family trip to Frinton said her daughter was left ‘gasping’ for breath.

The mystery follows a similar incident in Worthing, West Sussex, two weeks ago. The Maritime and Coastguard Agency said no pollution had been detected by surveillance aircraft which flew over the area.

Officials said a ‘small number’ of people had been taken to hospital after feeling unwell. Essex Police were still advising bathers to stay away from its beaches yesterday. 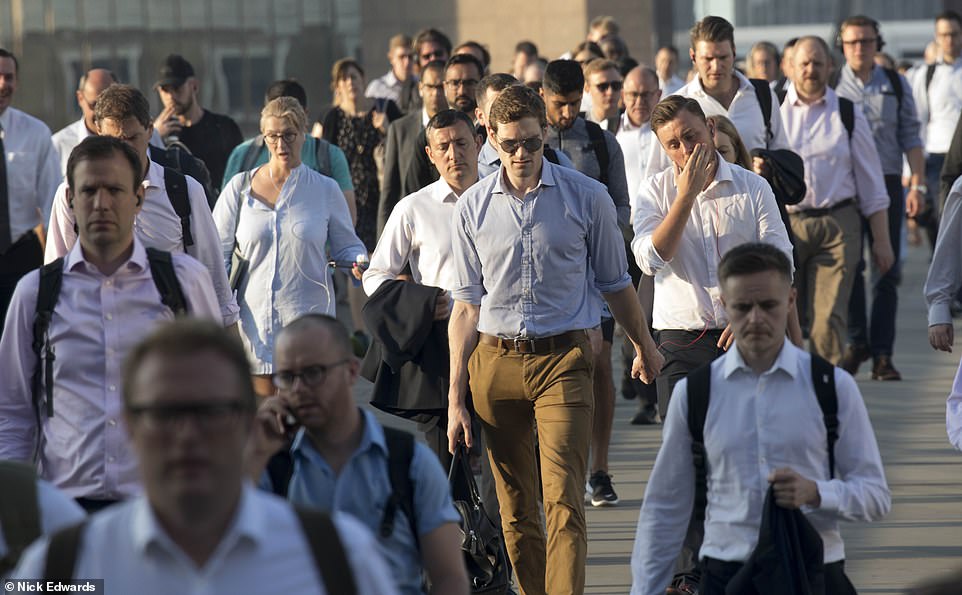 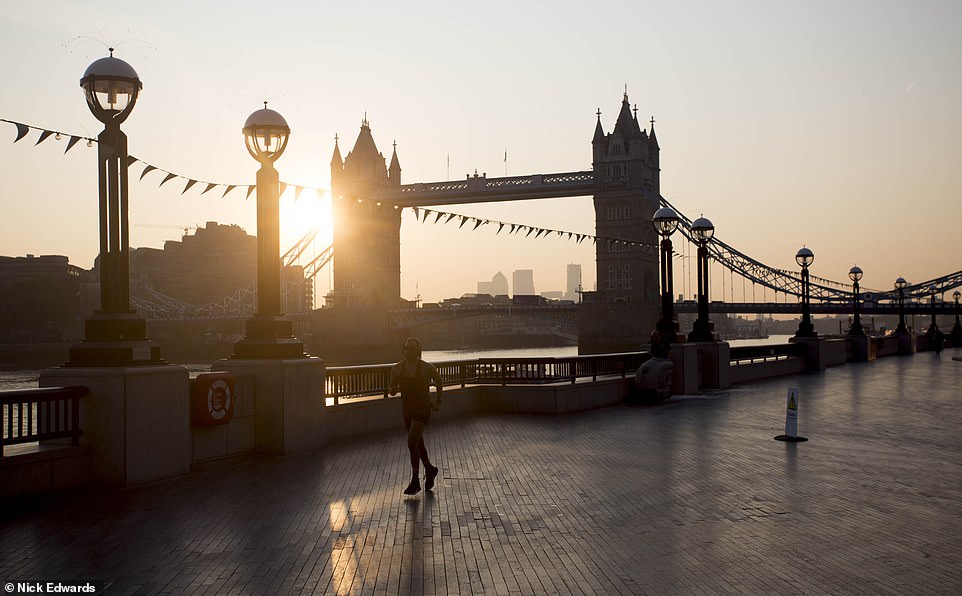 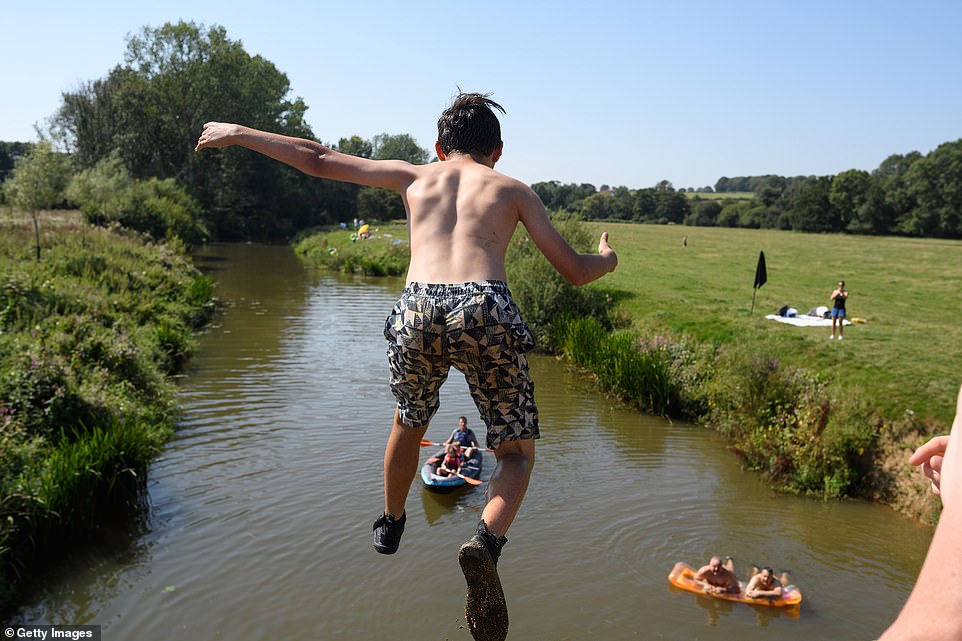 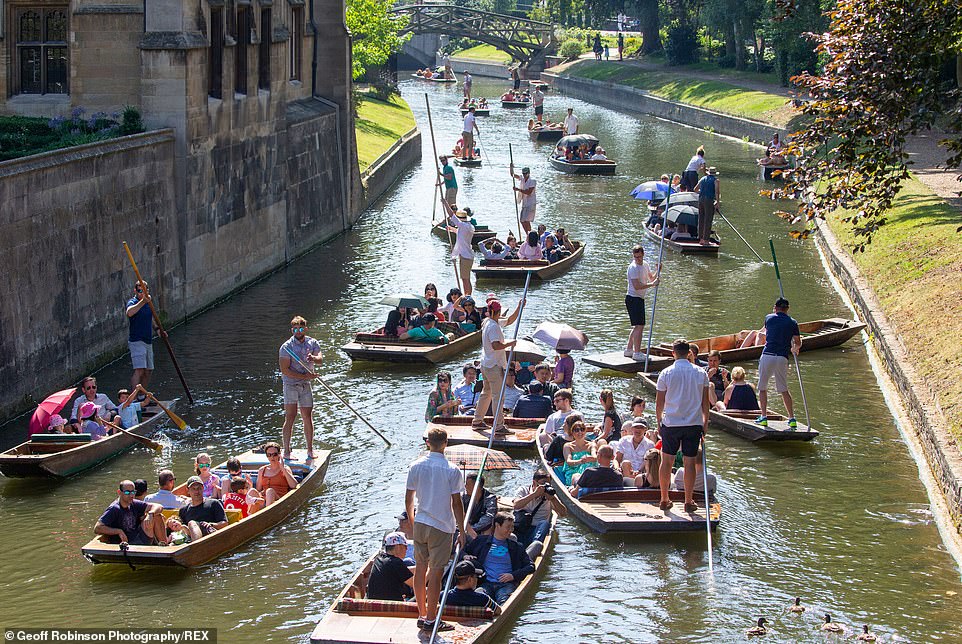 ‘I’m STUCK to my bed sheets!’: Britons complain it’s ‘too hot to sleep’ after 91.9F on hottest bank holiday ever – but it could get even HOTTER today as storms sweep in

Britons complained it was ‘too hot to sleep’ last night after temperatures peaked at 91.9F on the hottest bank holiday ever – but it could get even more scorching today before storms sweep in.

Dozens of people took to Twitter to moan about being stuck to their sheets as they sweated through the night, with one saying he was ‘giving up’ trying to get any shut eye, and others sharing memes inspired by SpongeBob SquarePants and The Shining.

But there will be scant relief today – the Met Office is predicting temperatures could reach 93.2F (34C) as the heatwave continues for a fourth day across southern and eastern parts of the UK. 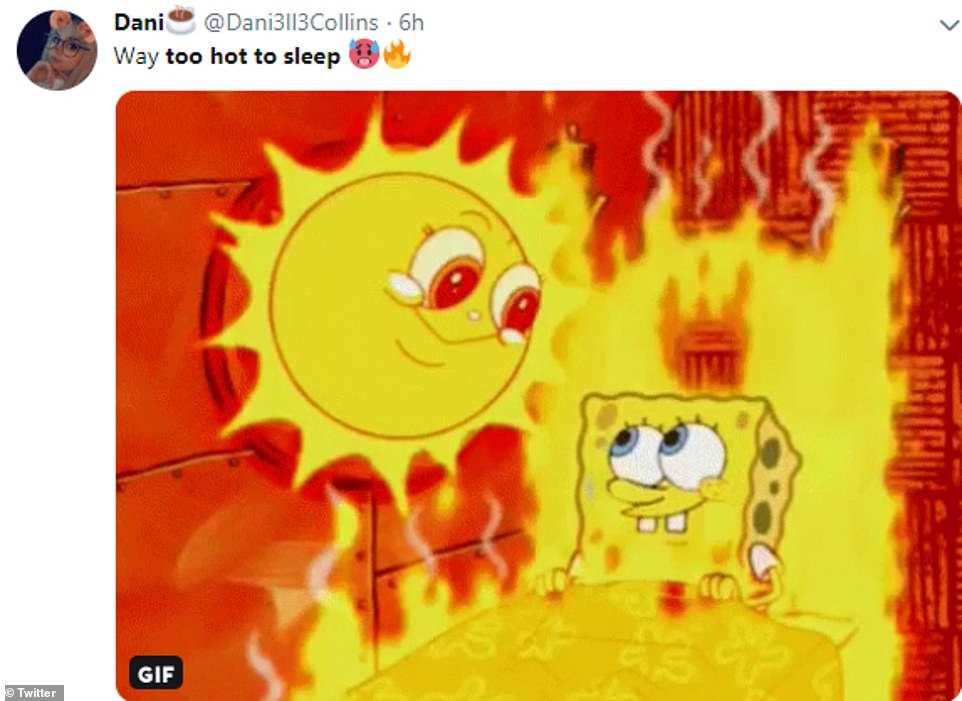 Dozens of people took to Twitter to complain about being stuck to their sheets as they sweated through the night, with one user tweeting an image of SpongeBob SquarePants being burned by the sun 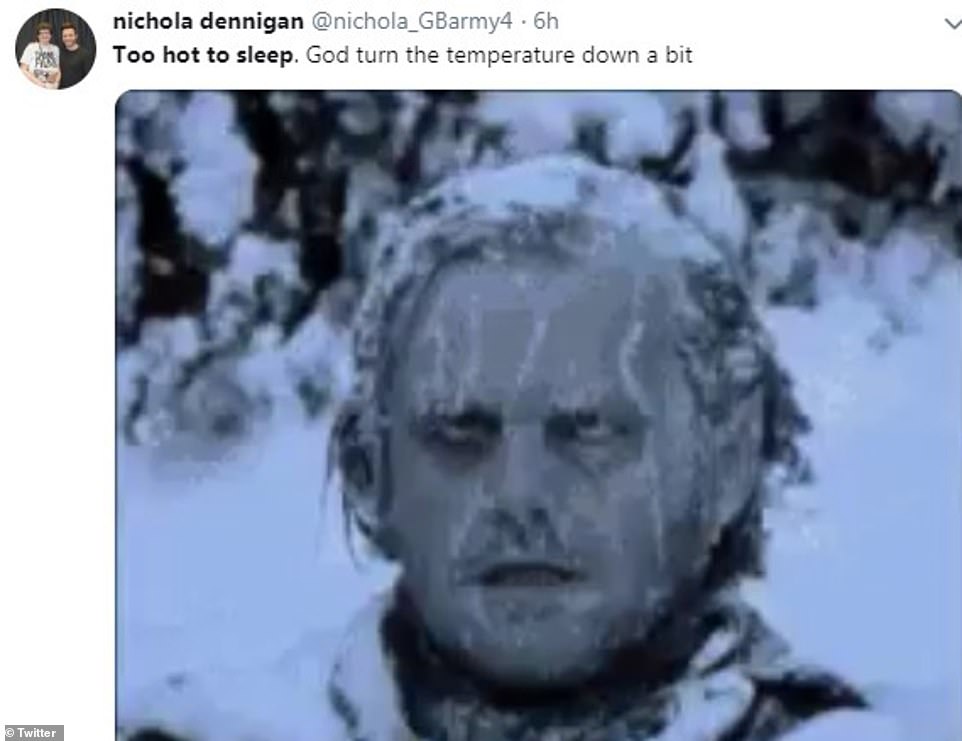 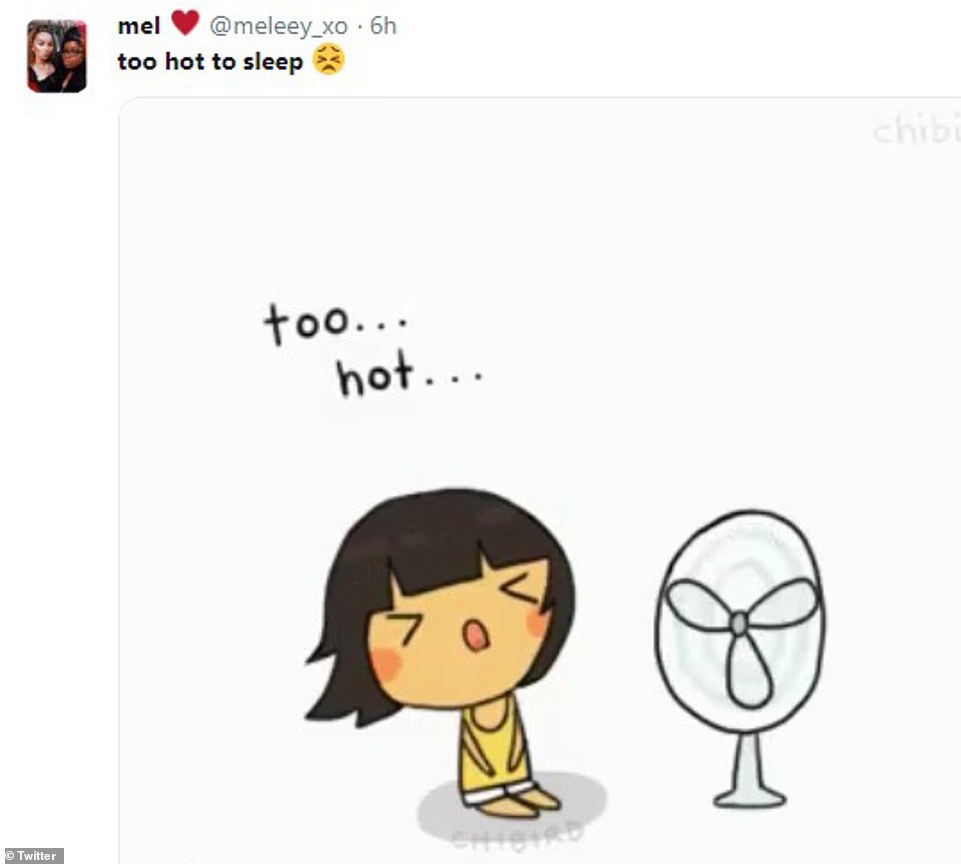 There will be little relief for people complaining about the heat, as high temperatures are set to continue for a fourth day 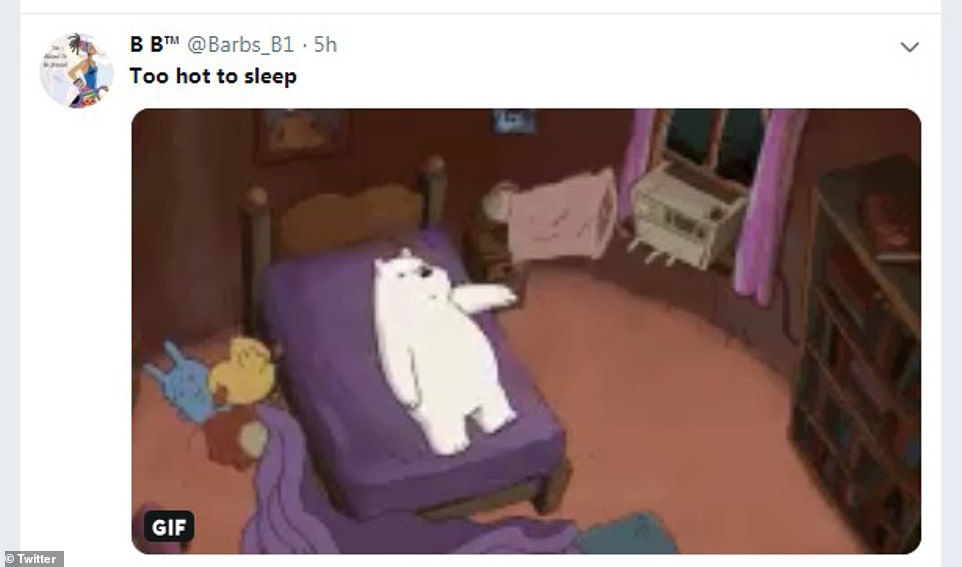 Today is expected to remain largely dry with scattered showers gradually moving eastward from the South West coast and through the Midlands. Pictured: A meme posted on Twitter yesterday