Lights go off for Earth Hour in global call for climate…

Countries around the world have switched off the lights for Earth Hour, a global call for international unity on the importance of climate change.

Since beginning in Sydney in 2007, Earth Hour has spread to more than 180 countries, with tens of millions of people joining in, from turning off the porch lights to letting the Opera House go dark.

Those 60 minutes are “an opportunity to adopt a shifting of the consumption culture, and behaviour change towards sustainability”, Indian Environment Minister Harsh Vardhan said in a statement.

Many people barely noticed. Around India Gate, New Delhi’s monument to the Indian dead in World War I, thousands of people continued with the city’s nightly warm-weather ritual.

The India Gate monument is seen lit, top, and after the lights were turned off for one hour to mark Earth Hour, in New Delhi, India (Oinam Anand/AP)

They bought ice cream and cheap plastic trinkets, they flirted, and young children rode in electric carts that their parents rented for a few minutes at a stretch.

But for an hour the arch stayed dark, a silent call for change.

Earth Hour was observed in #Pakistan on Saturday night from 8:30 p.m. to 9:30 p.m. by switching off all unnecessary light for one hour.
Earth Hour Movement is an effort for protecting a healthy environment and to conserve energy. #Connect2Earth pic.twitter.com/qdSATd3ThO

In Jordan, the Royal Society for the Conservation of Nature arranged 11,440 candles on a hilltop in the capital of Amman, establishing a Guinness World Record for the largest candle mosaic.

The candles spelled the Earth Hour motto of “60+”. 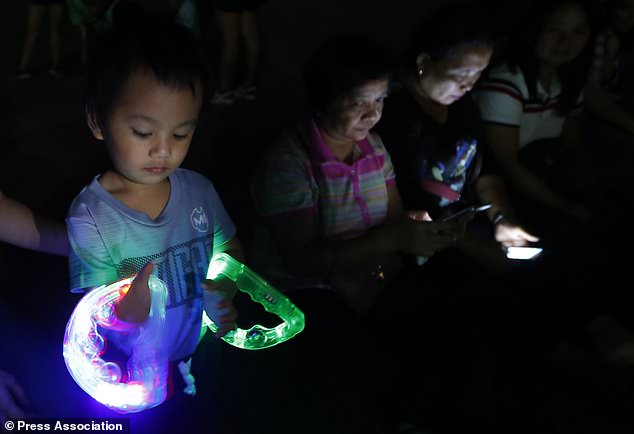 A Filipino girl plays with a light toy in observance of Earth Hour, in Pasay city south-east of Manila, Philippines (Bullit Marquez/AP)

However, attempts to light the candles largely failed because of wind on the hilltop, which is close to the city’s landmark, the Amman Citadel.

In Paris, the Eiffel Tower went dark, while in London, a kaleidoscope of famous sites switched off their lights — Tower Bridge, Big Ben, Piccadilly Circus and the London Eye.

The scene was repeated over and over across the world: at Sydney’s Opera House; at Kuala Lumpur’s Petronas Towers; at Edinburgh Castle in Scotland; at Brandenburg Gate in Berlin and at St Basil’s Cathedral in Moscow.