It was reported earlier this week that she had split from her Riverdale co-star Cole Sprouse.

On Saturday, Lili Reinhart was glimpsed arriving at the airport in Vancouver, Canada.

The 22-year-old actress kept her outfit casual and comfortable for her flight.

On her own: On Saturday, Lili Reinhart was glimpsed arriving at the airport in Vancouver, Canada, her first public sighting since splitting from her Riverdale co-star Cole Sprouse

Though the highs were in the mid-70s in Vancouver, Lili wore a dark-colored denim jacket with silver buttons for her flight.

Underneath she sported a black to, which was tucked into a pair of high-waisted acid wash jeans with the hems rolled up.

The Hustlers star had on a pair of white FILA tennis shoes and carried a thick black backpack over one shoulder.

The 5ft6in beauty had her blonde tresses pulled back in a tight bun and blocked out the sun’s rays with a pair of dark sunglasses. 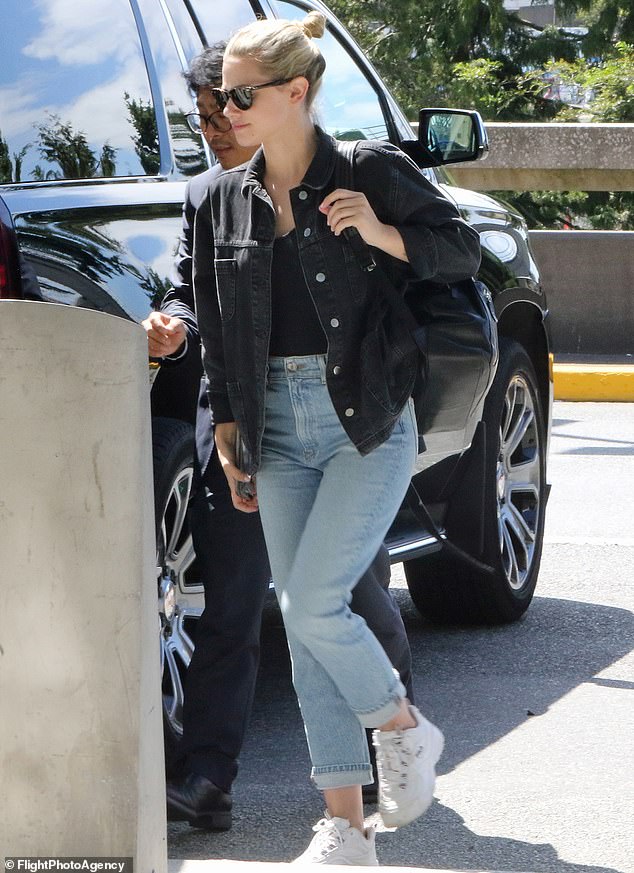 Not in the picture was Lili’s ex Cole Sprouse, who was reportedly attending a friend’s wedding in London.

Sources close to the couple revealed to Us Weekly on Monday that the two Riverdale actors had ended their two-year relationship sometime earlier this summer.

The two seemed to confirm as much when they appeared at San Diego Comic Con and looked noticeably distant from each other.

On Wednesday, Lili added fuel to the fire when she liked a video from Comic Con of herself refusing a microphone that Cole had tried to hand her, then seeming to distract herself with a cookie. 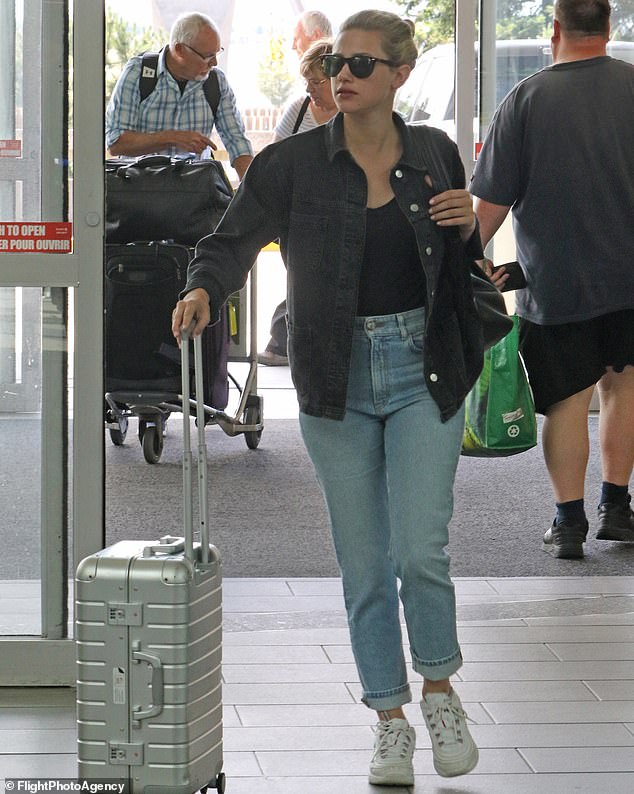 Splitsville: Not in the picture was Lili’s ex Cole Sprouse, who was reportedly attending a friend’s wedding in London 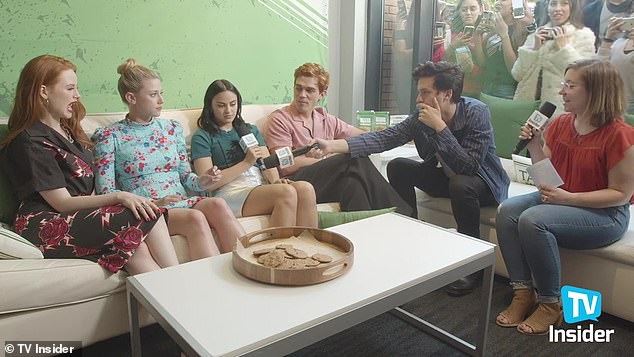 Shut down: Lili added fuel to break-up reports by liking a video of herself refusing to take a microphone Cole handed to her at Comic Con

Yet the two have publicly tried to downplay the reporting of a split.

The two shared images of their vampiric W Magazine cover shoot, each with their own captions that disputed the sources.

‘BREAKING: A reliable source has confirmed that none of you know s***,’ wrote Lili. 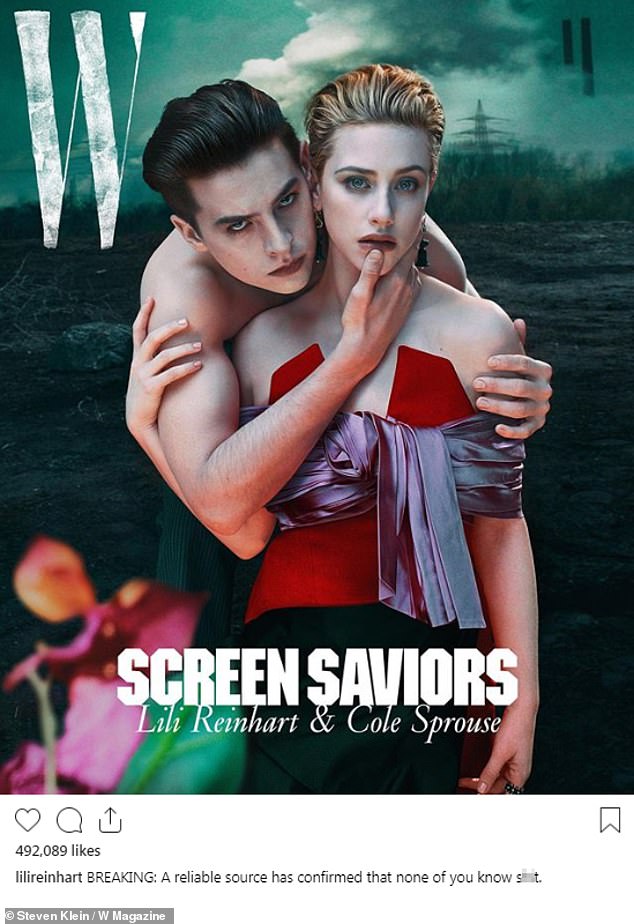 Conflicting statements: Yet the two have both public denied the break-up in captions for their joint W Magazine cover 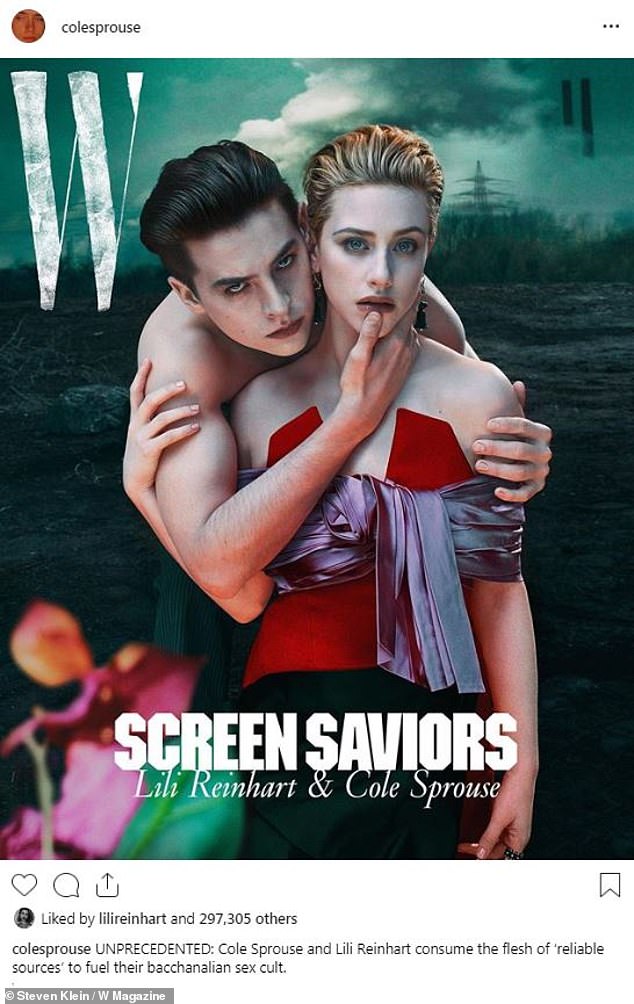 Two sides? Lili was straightforward in downplaying the report, but Cole was more eccentric as usual in his denunciation of the information

Though the couple were in a good enough mood to laugh about the split, their interviews in the magazine hinted at trouble in paradise.

Despite appearing together on the cover in a steamy horror film-inspired shoot, they opted to sit down for separate rather than joint interviews.

In response, Lili said the two actors simply didn’t want to be ‘grouped together.’

‘We’re not fighting with the idea that people group us together, but we are paired up a lot,’ she told the magazine.

‘We’re acknowledging that we’re in a relationship, but it’s a small part of who we are as people. We want our own separate identities.’ 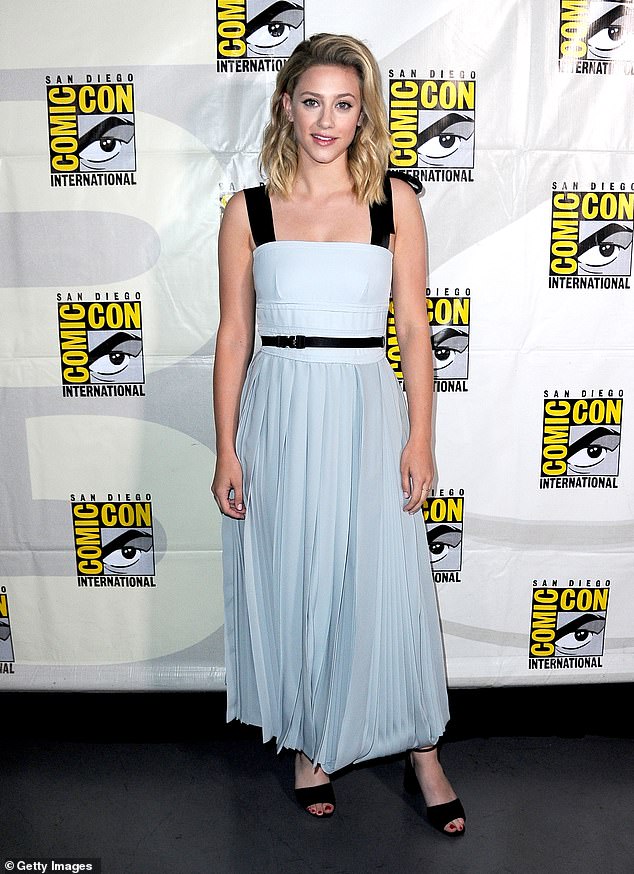 Mum’s the word: Lili and Cole have been together since 2017, though they’ve kept quiet about the details of their relationship; pictured July 21

Lili stars on the Archie Comics-inspired Riverdale as Betty Cooper.

Originally a competing love interest for Archie in the comics, Betty is currently attached to Jughead (Cole) on the CW series.

The two actors have been posting suggestive photos of each other on Instagram since the series began filming in 2016, but it wasn’t until the following year that the two made their attraction clearer.

Despite the attention, Lili and Cole remained tight-lipped about the status of their relationship.