LINDA KELSEY asks: Why do the ladies LOVE a tramp?

Forget the latest Balenciaga bag or new-season Louboutins, the current must-have A-list accessory is a dishevelled chap who looks like he should be thrown in the washing machine at 60 degrees along with his clothes.

His sartorial style could most kindly be summed up as grungy. Stains are a bonus. A beard or at the very least stubble — less designer than suggestive of a razor in need of replacing — de rigueur. Tattoos — the more and the uglier the better.

Hair? Unlikely to appear in a shampoo ad and either shaved to look tough or as stringy as the guitar he no doubt plays. If he’s a toy boy, too, well that’s the jackpot. 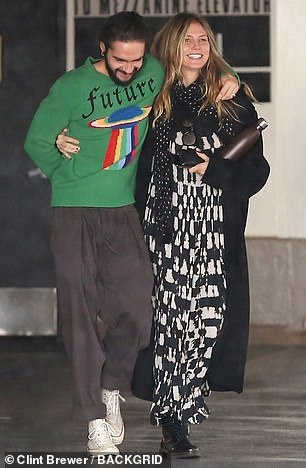 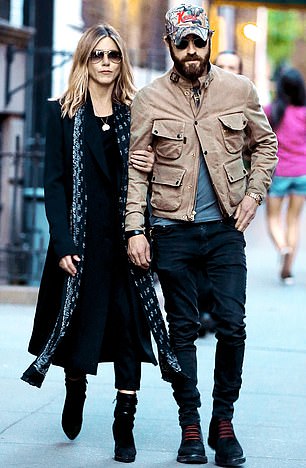 There’s a pattern emerging. From Cameron Diaz, 46, happily wed to guitarist and vocalist Benji Madden, 39, (who seems like a lovely bloke though not quite up to the red carpet in his customary attire of lumberjack shirt and baseball cap) to Jennifer Aniston with former beau Justin Theroux, apparently there’s nothing like a bloke who gives not a hoot for looking good for the camera to send a celebrity’s heart soaring.

Beauty And The Beast syndrome? Quite the opposite. The whole point about the Beast was that as soon as Beauty gave him her heart — and a loving kiss — he transformed into the handsome prince of her dreams.

But the beauties here already have the wealth, fame and talent — as well as the looks — to get any handsome prince they want. A snappily dressed and impeccably groomed man, however, is not who they’re after.

What these stars desperately desire is to get as far away as possible from the rarefied lives they lead. And these slightly edgy, don’t-give-a-damn guys are just the ticket.

Once you make it to Hollywood, you have to abide by an unwritten code of conduct that dictates exactly how you look and what you wear. It involves rigorous workouts, endless beauty treatments, hours in make-up — both for film roles and the inevitable red-carpet awards — plus all the other tedious stuff that prevents you from being your true self.

What woman in this situation would want to hook-up with a chap who also had to play this dreary game? 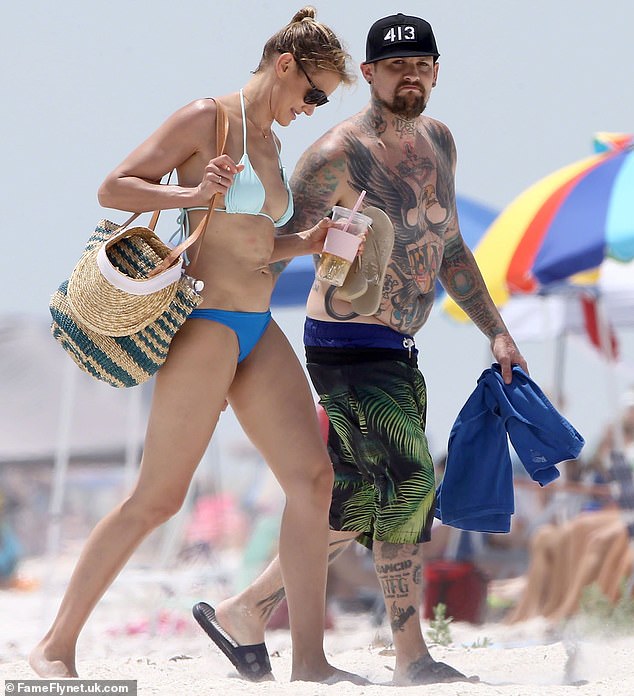 The life of the A-lister may be glamorous, but it’s so conformist it must make them want to scream.

After all, most actresses, when they start out, see themselves as rebellious, quirky and less conventional than the average girl.

And while they’re on the way up, uncertain of where the next job is coming from, they still have a great deal of freedom.

But the minute the siren call of Hollywood lures them in, life changes, for better and worse. For some, it can feel like being incarcerated in a five-star prison. These dressed-down dudes are their great escape.

There’s something sexy — and slightly dangerous — about these scruffy men, whatever their trade, who appear to break every rule of propriety in the book. They provide exactly the outlet these actresses desire, but without endangering their careers. And why not?

There’s something about Benji…

The ceremony, under a snow-white marquee and surrounded by white stephanotis flowers and lanterns, was beautiful, and friends claimed the bride was ‘madly in love’ with her groom, who plays with rock band Good Charlotte and boasts a pot belly and large image of American 18th-century polymath Benjamin Franklin on his back.

His tattoos include a massive ‘skull’ over his shaved head and ‘Cameron’ in curly script on his neck.

He previously dated pop singer Katy Perry and socialite Paris Hilton. As a child, his nickname was Kid Vicious in honour of the late Sex Pistol Sid Vicious.

When they married, they had been dating for only eight months, though Diaz, then 42, had known him socially for a good decade.

There have been reports since the wedding she is expecting, but there was no sign of a pregnancy when she assisted Gwyneth Paltrow at her nuptials last summer. Last March, Diaz said she had retired

As America’s sweetheart, Jennifer Aniston glows like a teenager well into middle age.

She fell for actor Justin Theroux in 2010 after meeting him on a film set. Theroux, arty, tattooed and motorbike-loving, was the opposite of clean-living Jen, now 49.

Aniston found fame and fortune on comedy series Friends, but he said he’d sooner kill himself than end up in a long contract on a TV show.

There was, it has to be said, something of a makeover for Theroux, 47. While on her arm, he acquired brighter, whiter teeth, hair in a deeper shade of black, and a taste for Gucci suits rather than biker jeans. His beard was shaved off, too.

He moved into her mansion, leaving his collection of human and animal teeth and Victorian switchblades behind.

Marriage was proposed in August 2012 and they wed three years later. They announced their separation in February last year. Thanks to an iron pre-nup, Jen seems to have hung on to every penny of her £147 million fortune.

Moss is out with the Count 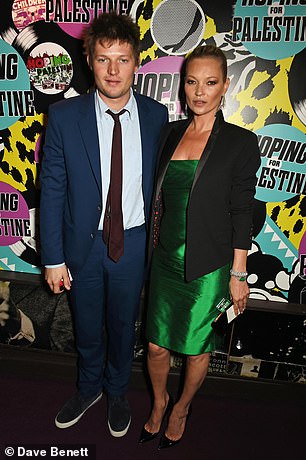 Kate got to know Count Nikolai via his mother, Debo, a high-society friend

Kate got to know Count Nikolai via his mother, Debo, a high-society friend.

Aged 30 to her 45, he is an aspiring photographer and boasted about drinking cows’ blood while on an assignment in Ethiopia.

They started dating quietly in 2015 and Nikolai undertook a detox in 2017, which seems to have kickstarted the supermodel’s embrace of sobriety and early nights.

He appears disinterested in clothes or fitness, and looks gently rumpled at her side (then again, who wouldn’t?).

Since her split from film director husband Len Wiseman in 2016 she has dated a string of younger men, starting with U.S. stand-up comic Matt Rife, 21, in 2017, followed by British comedian Jack Whitehall, 30, whom she was seen kissing last November.

Last month, her eye was caught by heavily tattooed Pete Davidson, yet another comedian, who is only 25.

The two were seen flirting and drinking champagne at a post-Golden Globes party. On Saturday, they emerged from a comedy gig in LA holding hands, before reportedly being driven to a hotel. 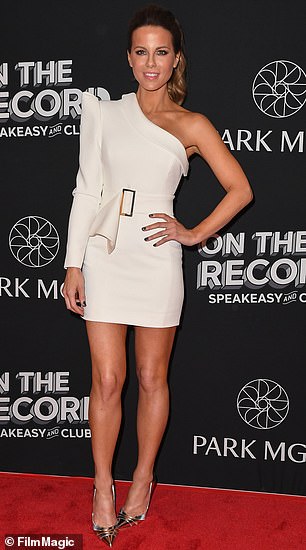 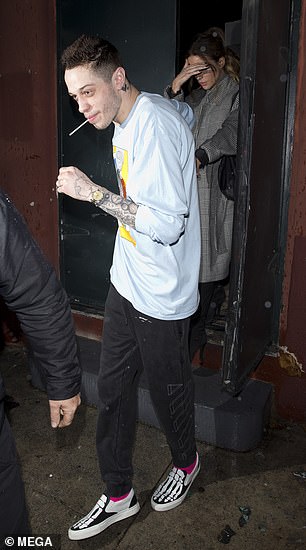 A rocker chum for Klum

She has carved out a post-modelling career as a flogger of lingerie and a judge on America’s Got Talent. Worth £42 million, she starts every day with a smoothie and eats no pasta or bread, and relies on bike rides and trampolining to stay in shape.

Kaulitz is in German band Tokio Hotel and at 29 is 16 years younger than Klum. He was previously married to German model Ria Sommerfeld.

He has ditched his dreadlocks, but is liberally bearded and has a pierced lip and ears. Klum has four children and has been married twice previously. She split from British singer Seal in 2012.

High maintenance Topshop heiress Chloe Green, 27, has a taste for designer clothes and diamond jewels, as befits a girl raised in Monaco who travels by private jet and on daddy’s mega-yacht. Sir Phil is worth £4 billion.

She fell for ‘hot felon’ Jeremy Meeks, 34, after meeting him at a party at the Cannes Film festival in May 2017.

At the time he was fresh out of prison and married to nurse Melissa, but trying out a career as a model after rising to fame thanks to his police mugshot. 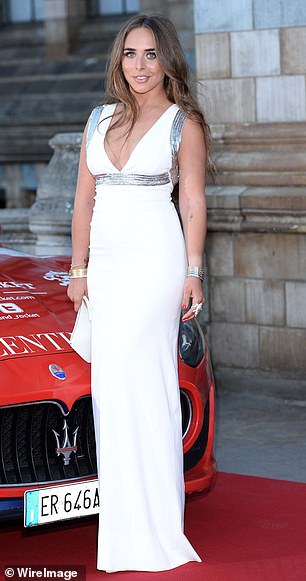 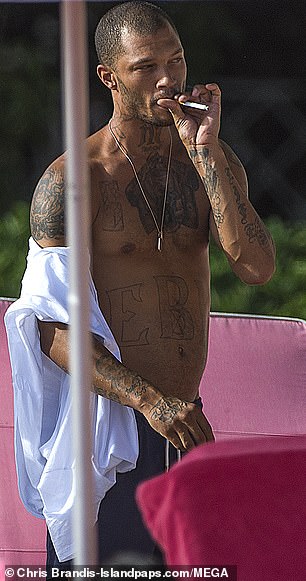 Meeks, who sports gang tattoos including a teardrop on his cheek, obtained a divorce in June 2018 — weeks after Chloe gave birth to their son Jayden.

He and Chloe are now planning their wedding, which may take place this month in Tahiti.

The budget, to no one’s surprise, is reported to be ‘unlimited.’

Now 48, Campbell has been an icon since her teens, and is on the cover of British Vogue yet again this month.

Famous for not suffering fools gladly, she is worth £45 million and lives mostly in New York, where she quietly dates various multi-millionaire beaus.

She has been convicted of assault four times, most recently after hitting a paparazzo with her handbag in Sicily in 2009 because he was taking pictures of her sightseeing with then boyfriend Vladimir Doronin.

She goes on a once-a-month, two day juice-only fast and for the rest of the time shuns sugar and drinks only water. 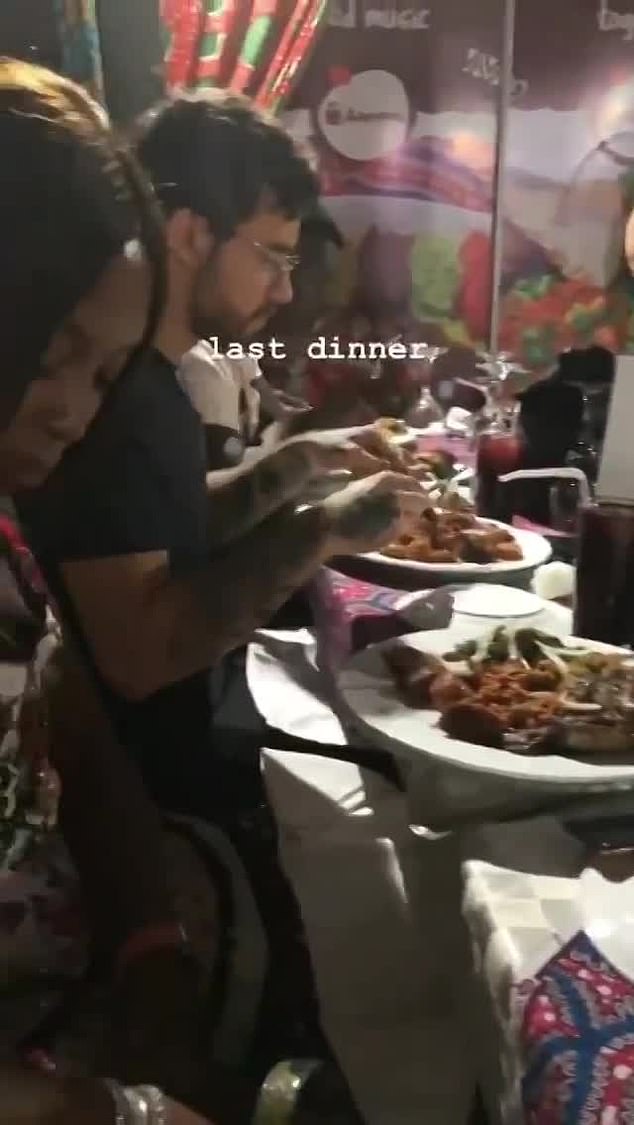 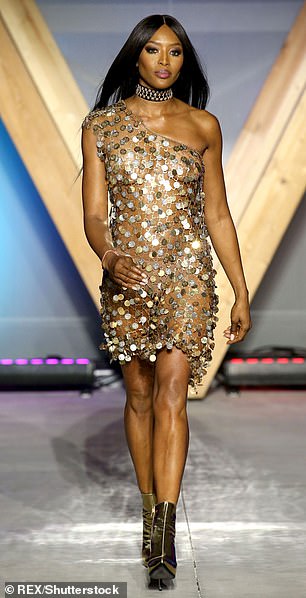 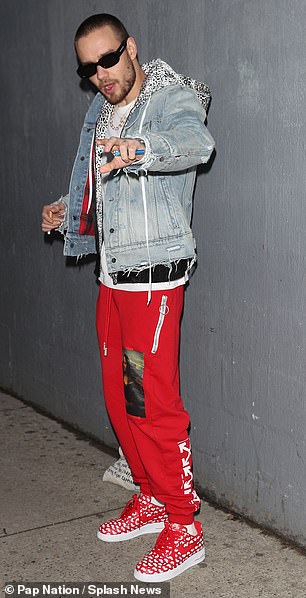 Campbell, who has never married or had children, met baby-faced One Direction star Liam Payne, 23 years her junior, at a post-Brits party in London last February.

He was in the final throes of his romance with TV presenter Cheryl Cole, by whom he has infant son, Bear.

He and Naomi have been enjoying a romance for two months, and welcomed in the New Year together in Ghana before being seen at a concert in London together last weekend.

Reports suggest that the sex is ‘mind blowing’ and that Liam ‘can’t believe his luck’. Apparently, Payne is hoping to land an endorsement deal with fashion label Hugo Boss thanks to her industry contacts.

A big fan of tattoos, he has his X factor audition number inked on his arm in roman numerals.