Pompeo hosted the dinner the night before the Kennedy Center Honors gala at the State Department, which is where the honorees received their awards.

When delivering remarks to the audience at the dinner, Pompeo congratulated Ronstadt, a headliner honoree, and joked about her 1974 hit “When Will I Be Loved,” asking when would be loved.

At the Kennedy Center Honors State Department Dinner, Mike Pompeo (right) joked about honoree Linda Ronstadt’s (left) hit ‘When Will I Be Loved,’ asking when he would be loved, the 73-year-old singer told the Trump official, ‘Maybe when you stop enabling Donald Trump’ 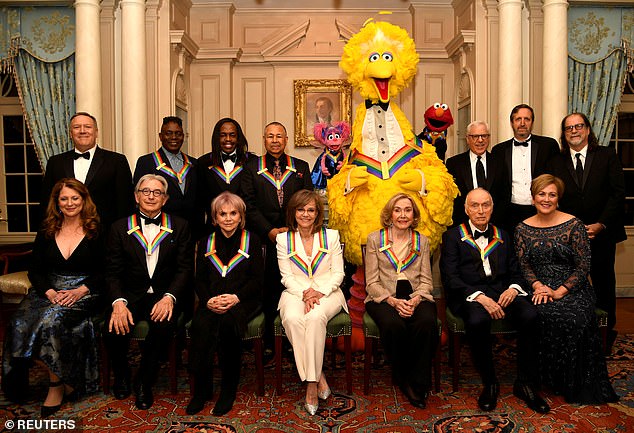 Despite that slight and the location of the awards Sunday night in Washington, D.C., the event remained largely clear of politics, with some subtle references to the divisive political climate and a few exceptions.

Sunday night’s host, rapper LL Cool J, made a remark about how the nation needs to stay “encouraged” through difficult times.

Pompeo did attend the awards, but did not walk down the red carpet for cameras and reporters the night after his dinner.

Despite the ongoing impeachment investigation, two lawmakers did make an appearance on the red carpet, wading through the sea of cameras and reporters – Democratic House Speaker Nancy Pelosi and Republican Senator Rand Paul.

Although there was a full list of other lawmakers and politicians who attended the awards – a record-setting number according to the board chairman of the Kennedy Center – most avoided the red carpet and instead arrived under the radar.

Pelosi posed for some pictures and took some time to speak to the cameras, but waited until print and magazine reporters were buys speaking with Tom Hanks to sneak through in the background.

The Chairman of the Board for the Kennedy Center, David Rubenstein, during his remarks upon return from intermission made mention of several politicians, political figures and administration officials in the audience. 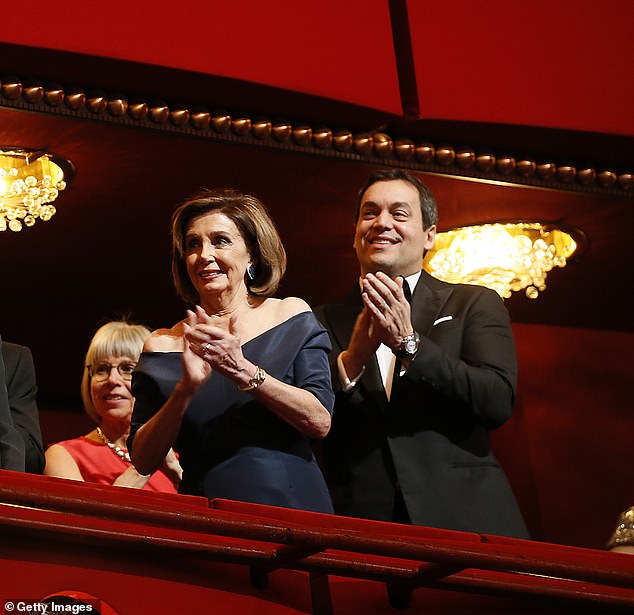 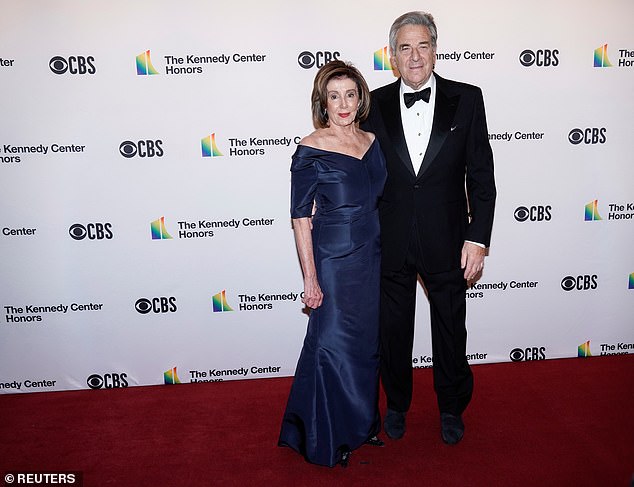 Pelosi – pictured here with her husband Paul – was among the several lawmakers and government officials present at the 42 annual gala. She was able to avoid answering any political questions from reporters as she leads the House impeachment inquiry

When he listed those in the Trump administration in attendance, including Acting Chief of Staff Steven Mnuchin, Education Secretary Betsy DeVos, Federal Reserve ChaIrman Jerome Powell, and Pompeo, among others, there was scattered, polite applause.

However, Pelosi received a standing ovation that rivaled the reaction some of the night’s honorees received — exhibiting the political temperature of the room Sunday Night.

The California Democratic leaders is trailblazing the fight against the president, and this week instructed House Committee chairmen to move forward with drafting articles of impeachment against Donald Trump.

Rubenstein said there were several others in the audience, but indicated he didn’t have time to list them all.

‘We have more leaders of our government than I’ve ever seen at a Kennedy Center Honors,’ Rubenstein said.

Trump was noticeably absent for the third year in a row, even though the commander in chief traditionally attends the honors.

Actress Sally Field, one of the night’s honorees, said she wouldn’t have attended the gala if Trump was in the audience.

Actor and director Tom Hanks also got political on the red carpet.

Although Hanks did not say whether he would endorse a candidate and who that candidate may be, he reminded reporters that the 2020 elections are still very far away.

‘At this point in the last election, the front runners were Scott Walker, Jeb Bush and Marco Rubio — and they were all going to lose to Hillary Clinton. So I think that’s where we are exactly here in 2019,’ Hanks said 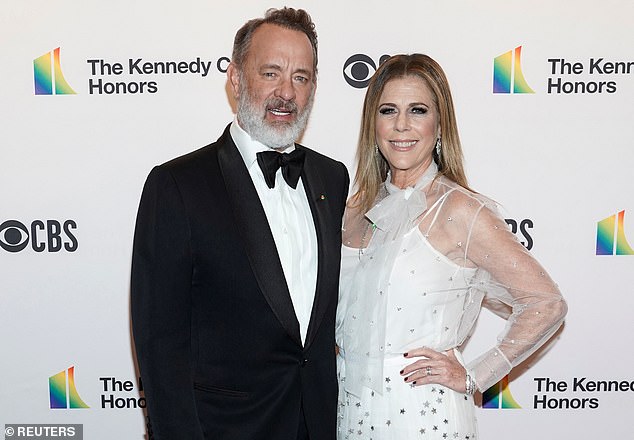 Tom Hanks also walked the red carpet with wife Rita Wilson. He told reporters that if anyone tried to predict who can not become president, a rock should be dropped on their foot 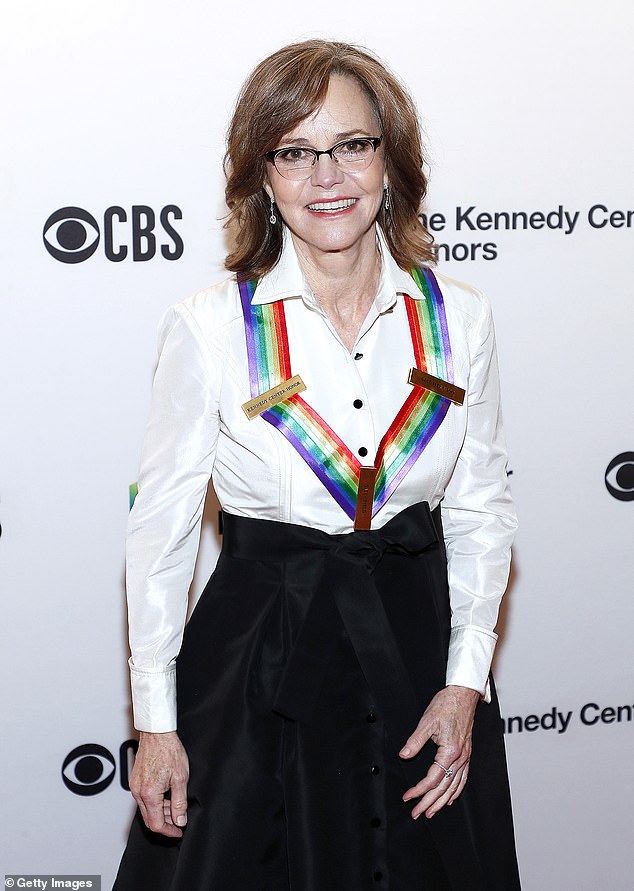 Sally Field, another honoree, said she wouldn’t have attended the gala if Trump was there. Luckily for the actress, Trump was absent for the third year in a tow for an event traditionally attended by the president 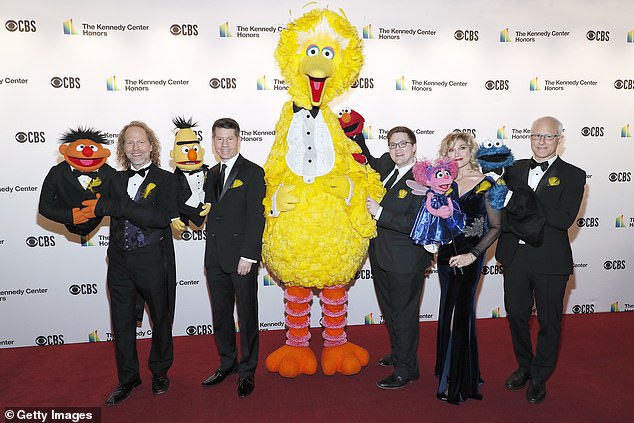 The cast of Sesame Street, along with their puppeteers, of course, also walked the red carpet. Elmo reminded reporters he’s only thee-and-a-half-years-old, so he doesn’t know anything about elections or the president

When asked if he was making any predictions, Hanks said that any person who said ‘someone can’t become president’ should be shot in the foot, which his wife reminded him wasn’t proper to say.

‘Here’s one thing you should never do, no way: if anybody says, ‘So-and-so could not become President of the United States,’ take a gun and shoot them in the foot,’ Hanks said.

‘Don’t day that,’ Rita Wilson joked with her husband, to which he suggested the alternatives of stabbing or dropping a rock on their foot.

‘They are wrong,’ he said of that hypothetical person. ‘Anybody can become President of the United States.’

Hanks is a big critic of Trump and has donated to potential Democratic rival and former Vice President Joe Biden’s campaign.

The cast of Sesame Street also walked the red carpet, along with their puppeteers.

Elmo, while he enjoyed visiting the Washington Monument, said he doesn’t really know anything about politics, reminding reporters he’s only three-and-a-half-years-old.

Of course, the puppeteers behind the characters were coming off the loss of Caroll Spinney, the first and longtime puppeteer behind Big Bird and Oscar the Grouch.

Both the puppeteers and their puppets donned a yellow feather on their dresses and tuxedos.

The puppeteers all said they were glad to be together on the same day of their friend and ‘mentor’ died at the age of 85.

Spinney’s death was the result of a longtime fight with dystonia, a neurological movement disorder.

The 2019 Kennedy Center Honors will air December 15 on CBS.