The teenager who murdered teaching assistant Lindsay Birbeck has been unmasked as a traveller named after boxing sensation Rocky Marciano.

The 17-year-old strangled the 47-year-old mother-of-two, who was found wrapped in two plastic bags at the back of a cemetery in August 24 last year.

The discovery of her body, by a dog walker, was made 12 days after she went missing from her home in Accrington, Lancs.

A post-mortem found the mother-of-two, who had left her home for a walk when she went missing, had died as a result of compression of the neck.

Rocky Marciano Price previously could not be named for legal reasons as he is under the age of 18 granting him automatic anonymity under UK law. Price, of Accrington, was found guilty by a jury at Preston Crown Court on Wednesday.

Reporters in court today challenged the restriction due to the severity of the crime and Justice Yip has now lifted the order. She said: ‘The murder was a truly shocking event. This was a dreadful crime which generated strong public interest.

Rocky Marciano Price (pictured) previously could not be named for legal reasons as he is under the age of 18, but reporters in court challenged the anonymity order due to the severity of the crime 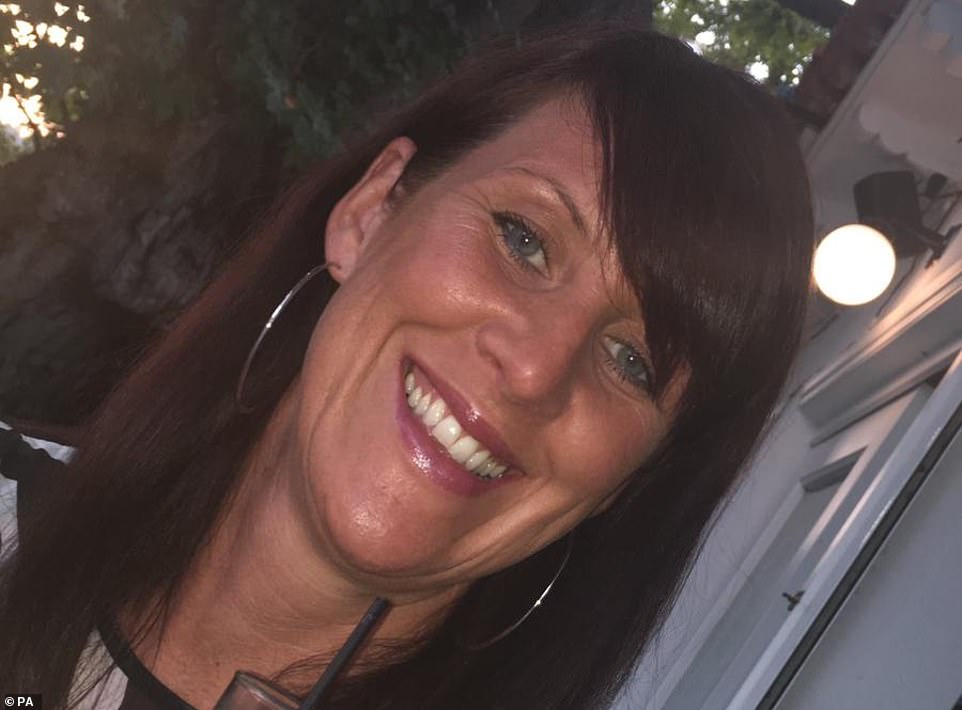 Lindsay Birbeck, 47, from Accrington, Lancashire, was found buried in a shallow grave at the back of Accrington Cemetery in August last year 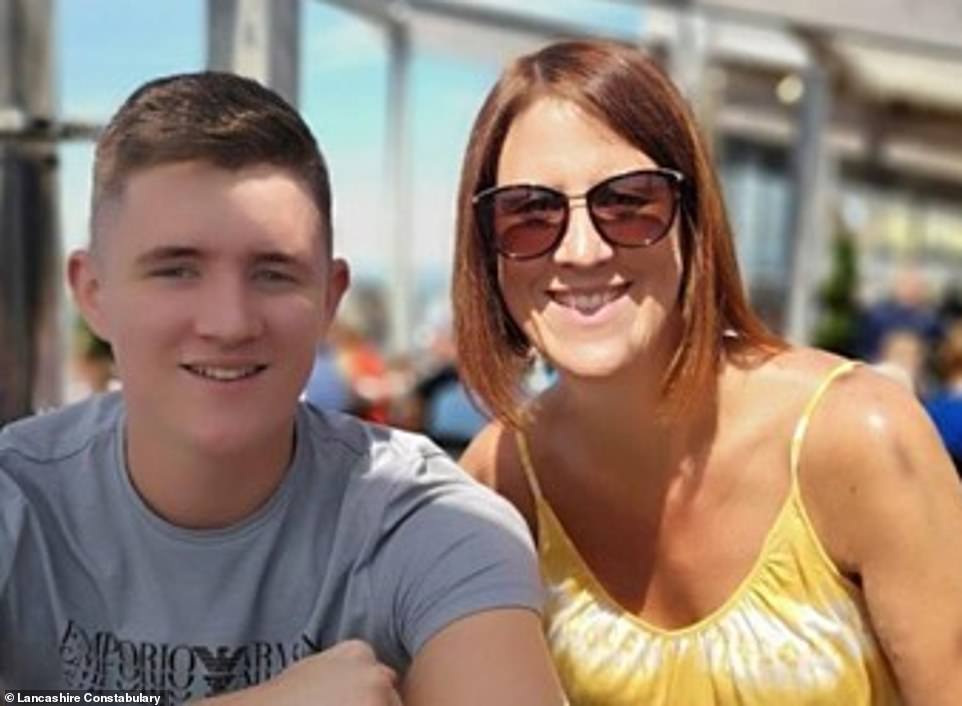 Mrs Birbeck with her son Steven, 20. Mrs Birbeck was reported missing by her family just after midnight on August 13 and police started an investigation into her disappearance

‘The public naturally wish to know who this person was as they come to terms with something that rocked the local community.

‘The defendant’s photograph was already placed in the public domain [as part of a CCTV appeal]. I consider it inconceivable anybody who would wish him ill-harm would not discovery his identity.

‘The wider public are likely to want to know his identity and background with a view to making sense of how such a young person could do something so dreadful.

‘There is a strong public interest in full and unrestricted reporting of what is plainly an exceptional case. The real public interest exists now at the time of conviction and sentence.

‘Continuing reporting restrictions would substantially and considerably restrict the freedom of the press.’

The teenager – named after unbeaten heavyweight champion Rocky Marciano – is from Accrington and lives not far away from the cemetery where Lindsay Birbeck was found.

The 17-year-old’s is understood to be living with his parents, Martina and Creddy Price, who were in court for every day that their son had to attend along with other relatives, as reported by the Lancashire Telegraph. 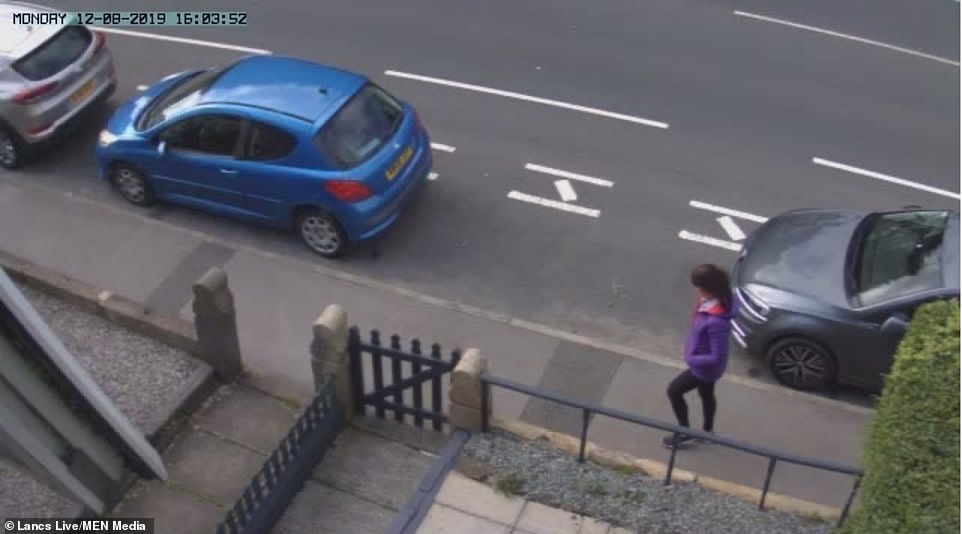 Prior to her murder, Mrs Birbeck had left her home in for a late afternoon walk to a nearby wooded area known as the Coppice. Pictured: The last CCTV sighting of Ms Birbeck before she was murdered

Who is Rocky Marciano?

The 17-year-old murderer was named after boxing champion Rocky Marciano who is considered one of the greatest fighters of all time.

Mr Marciano was born and grew up in Boston, Massachusetts, and had an underwhelming amateur record of 8-4.

But a is the case for many fighters he excelled in the professional ranks after winning his first fight in 1948.

His most famous victory was against Joe Walcott in 1952 where he became world champion. He was known for his fearsome power and ability to knock opponents out.

Marciano went on to accrue an impressive record of 49 wins, with 43 of them coming by knock out.

He is considered by boxing historians to be one of the greatest heavyweight boxers of all time, and debate rages to this day on if he would have beaten the great Muhammed Ali.

The defence had opposed the application to name Price due to his vulnerabilities. The court heard that Price has already been subject to two ‘attacks’ while on remand at HMP Wetherby.

Barrister Mark Stuart said: ‘Rocky Price’s difficulties are particularly with verbal or the lack of verbal communication and the difficulties he will have within a prison setting.

‘He is about to face now a significant custodial sentence. Not only is it a life sentence but a significant amount of time before his position could be considered by a parole board.

‘He is in a young offenders institute and is a category A prisoner. While some inmates may have some inkling what the position is, the concern is if he is named there is a significant prospect others would find out his name and that could cause him some difficulties.

‘There is certainly a potential that those in custody may feel a degree of revulsion about what he has done and may even verbally or physically abuse him.

‘It maybe difficult for him to respond and report it to the appropriate authorities.

‘The effect of revealing his name will also have an effect on various members of his family.’

Jury members had previously heard how the teenager, who was 16 at the time, had killed Mrs Birbeck in a woodland before moving her body to Accrington Cemetery in a wheelie bin. 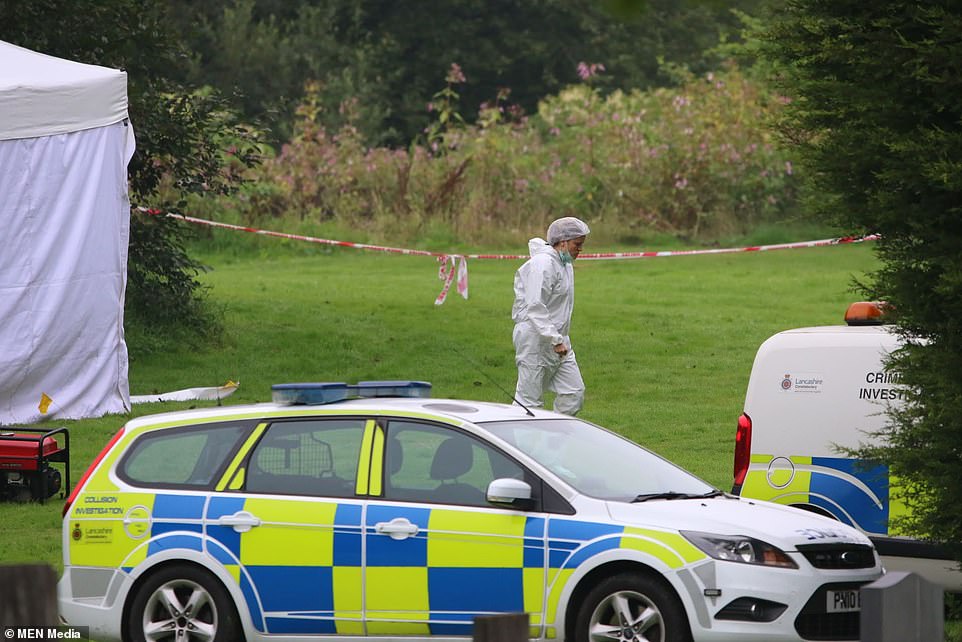 A post-mortem found the mum-of-two, who had left her home for a walk when she went missing, had died as a result of compression of the neck. Pictured: Police search where Mrs Lindsay’s body was found at Accrington Cemetery 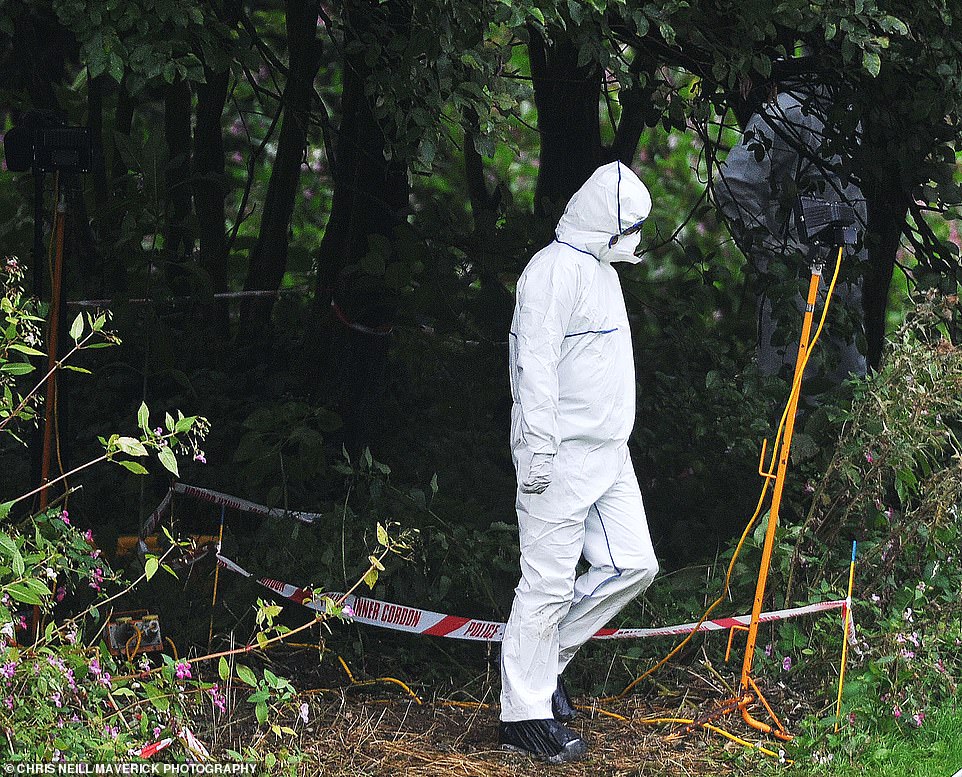 Teaching assistant Lindsay Birbeck, 47, was found dead at Accrington Cemetery on the outskirts of the Lancashire town in August last year

He attended a police station several days after Mrs Birbeck was found, when police released a CCTV clip of a young male pulling a blue wheelie bin behind him on Burnley Road.

He went on to admit dragging the bin from the Coppice on August 17 – with Mrs Birbeck inside – across Burnley Road to the cemetery where he buried her.

Prior to her murder, Mrs Birbeck had left her home in for a late afternoon walk to a nearby wooded area known as the Coppice.

She had invited her teenage daughter, Sarah, and Sarah’s boyfriend over for tea at 6pm.

But when she did not return from her walk, her worried family raised the alarm.

The court heard her attacker had been on the prowl in the woods for lone females and is thought to have killed Mrs Birbeck shortly after she entered the Coppice. 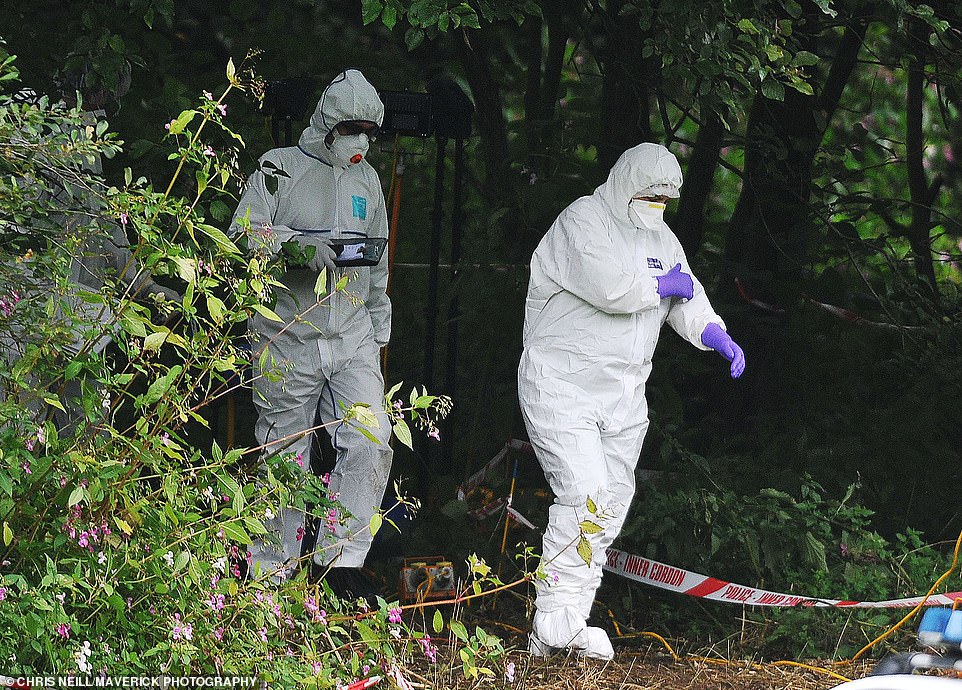 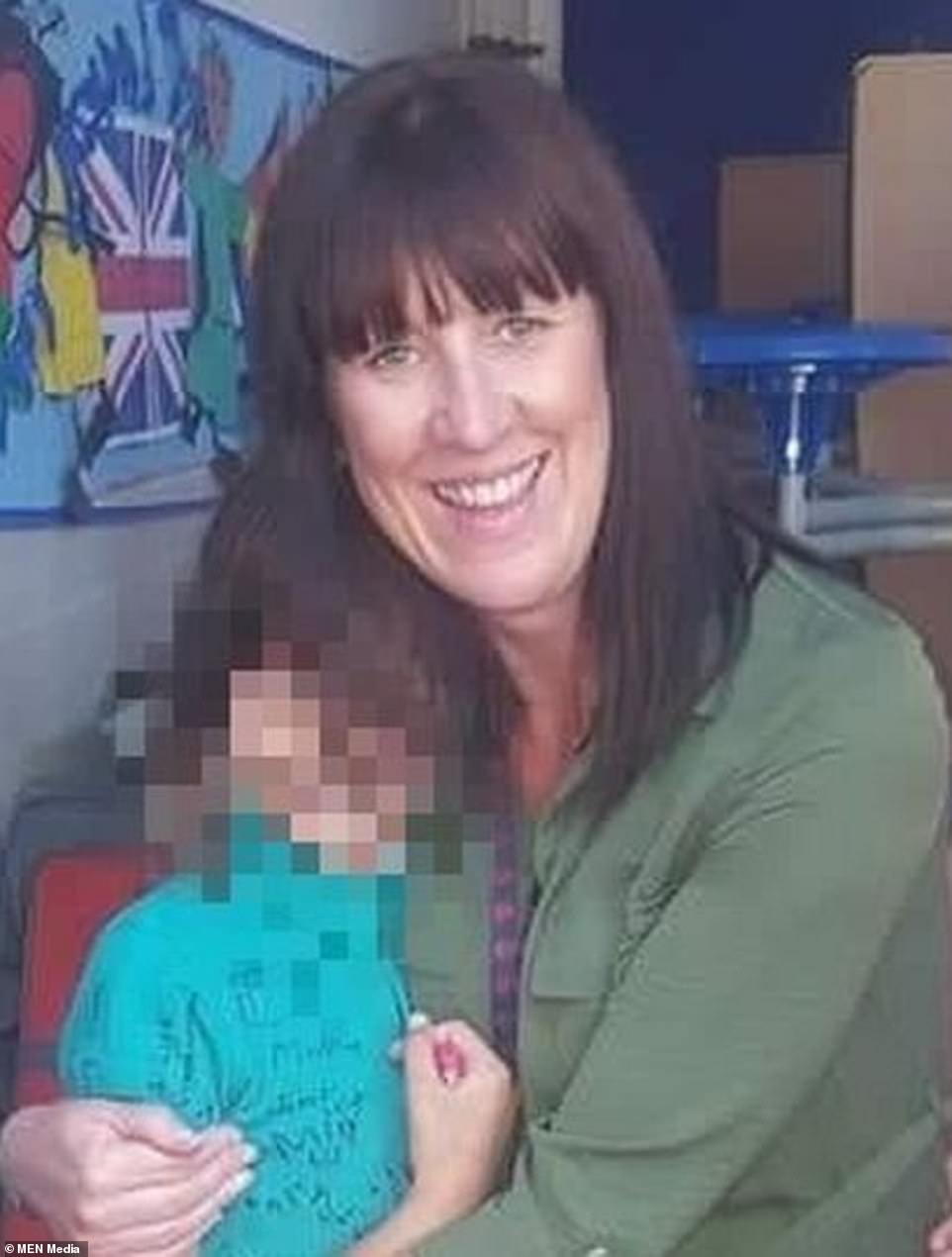 A 16-year-old boy strangled mother-of-two Lindsay Birbeck and dragged her body through the streets in a wheelie bin before burying her in a cemetery, a court has heard

Shortly before Mrs Birbeck entered the Coppice, another woman said she feared for her safety when a lone male wearing a grey tracksuit and his hood up followed her on her walk.

On Wednesday, a jury at Preston Crown Court convicted the youngster guilty of murder after deliberating for more than four hours. 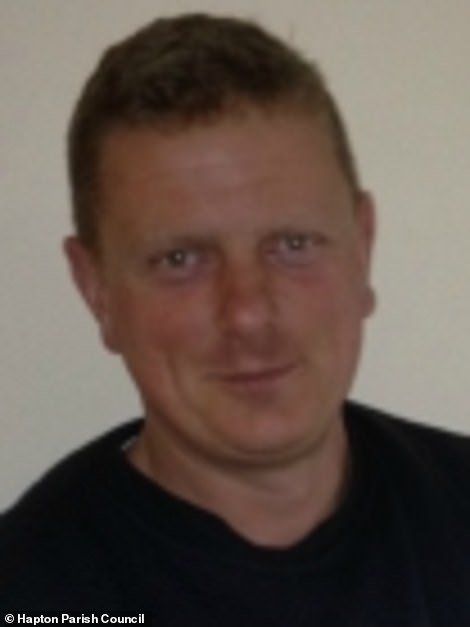 The verdict was returned exactly a year after the murder of Mrs Birbeck, who had split up from her husband and moved to a new home in March last year after she started a new relationship.

The teenager had previously pleaded guilty to assisting in the disposal of her body but claimed he played no role in her death.

He said he was offered ‘a lot of money’ by a mystery man to ‘get rid of the body’.

He stated: ‘I have not met this man before. I have not met him since, nor have I had any contact with him. He has not paid me any money.

‘He told me that he would leave the money for me near where the body had been at first once everything was clear.’

The Crown Prosecution Service did not accept his version of events and said the defendant’s account was ‘implausible fiction’.

And of the couple’s two children, Steven Birbeck, 19, said the person who killed his mother had robbed her of the chance to become a grandmother.

Responding to posts on Facebook, Mr Birbeck, who is chairman of nearby Hapton Parish Council, told a friend he was ‘broken mate, it certainly hurt’. 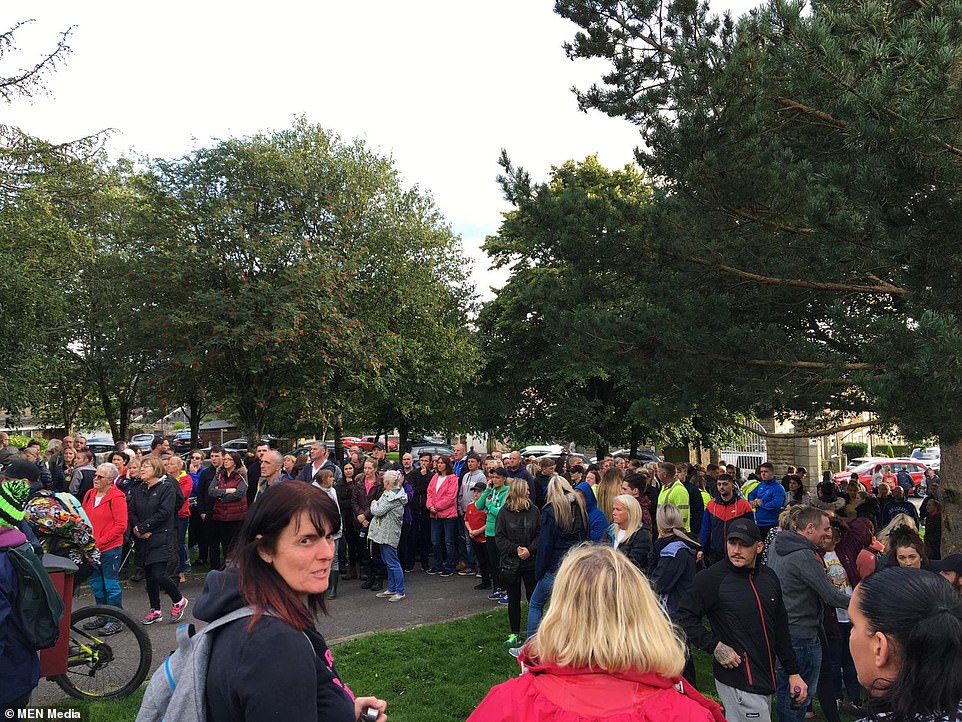 One of the couple’s two children, Steven Birbeck, 19, said the person who killed his mother had robbed her of the chance to become a grandmother

He also praised police for the ‘speedy arrest and the way you have been with my family’, but added: ‘It is horrendous watching our children go through this.’

‘The fact that she will never see me and my sister grow up and not going to be there on our wedding days and never see her grandchildren deeply saddens us. All taken by some selfish person who deserves what comes around.’

The discovery of the body brought to an end an extensive search. Thousands of people in the community were involved in handing out flyers and looking for her.

More than 19,000 people had joined a Facebook group to assist emergency services with the search for the worker.

Sentencing is expected to take place on Friday.