She became an A-lister practically overnight thanks to the success of her hit rom-com The Parent Trap.

And Lindsay Lohan shared how grateful she was to have starred in the 1998 classic on Tuesday, after the film’s director Nancy Meyers, 71, shared a montage from the movie on Instagram to celebrate its 23rd anniversary.

‘Thank you for all of the love sent my way over the years about this film,’ the filmmaker captioned her clip, which showed Lohan, now 35, as a pre-teen playing two different roles.

Grateful: Lindsay Lohan, 35, thanked director Nancy Meyers for ‘the opportunity of a lifetime’ when the filmmaker celebrated the 23rd anniversary of The Parent Trap on Instagram on Tuesday; seen in 2019 in Melbourne, Australia

‘I’ve enjoyed all of your DMs, photos, parties, costumes, handshake videos and just general sweetness,’ Nancy continued, before tagging Lindsay and her costars Elaine Hendrix and Lisa Ann Walter, as well as one of the movie’s co-screenwriters (and her ex-husband), Charles Shyer.

Lindsay jumped into the comments to share her appreciation for the career-making role.

‘Thank you for the opportunity of a lifetime Nancy,’ she wrote, along with prayer hands and a heart emoji.

‘@lindsaylohan Love you always Linds,’ the writer and director replied. 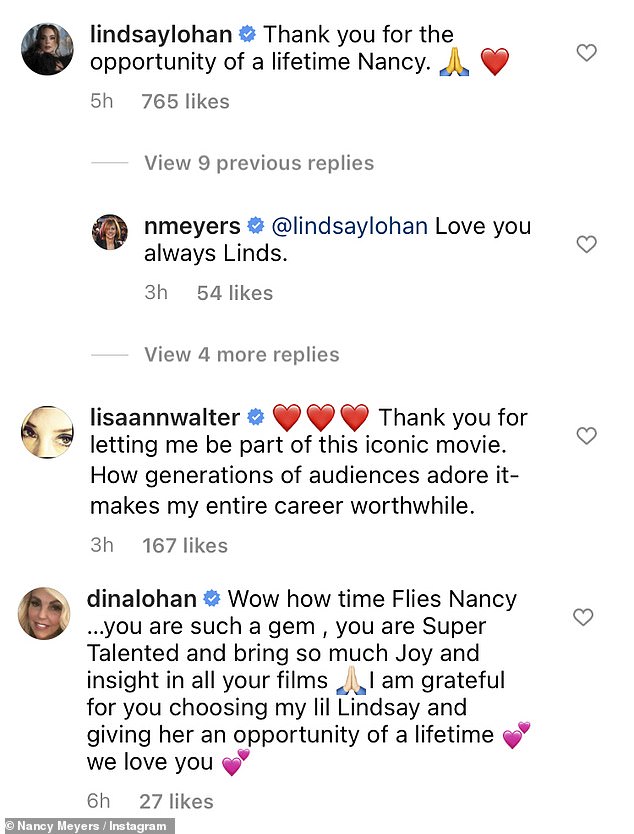 Lindsay’s mother Dina Lohan also shared her appreciation for Meyers in the comments.

‘Wow how time Flies Nancy…you are such a gem , you are Super Talented and bring so much Joy and insight in all your films,’ she wrote.

‘I am grateful for you choosing my lil Lindsay and giving her an opportunity of a lifetime. We love you,’ she concluded, adding pink hearts.

Lisa Ann Walter wrote, ‘Thank you for letting me be part of this iconic movie. How generations of audiences adore it-makes my entire career worthwhile.’

Other famous faces were moved to celebrate the film, including Katie Couric, who called it, ‘THE ABSOLUTE BEST.’ 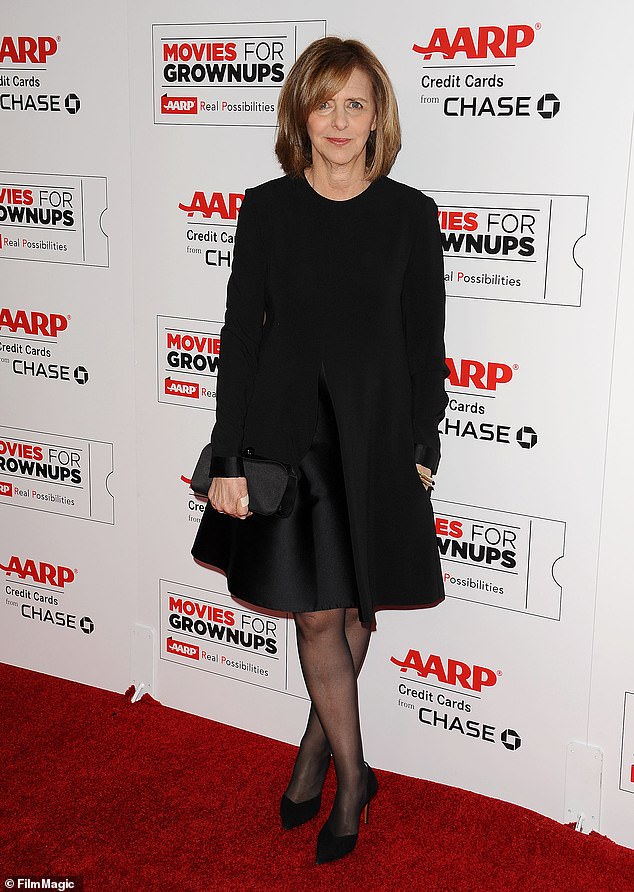 The filmmaker: Meyers directed the film and co-wrote it with her then-husband Charles Shryer, whom she tagged in her post; seen in 2016 in Beverly Hills 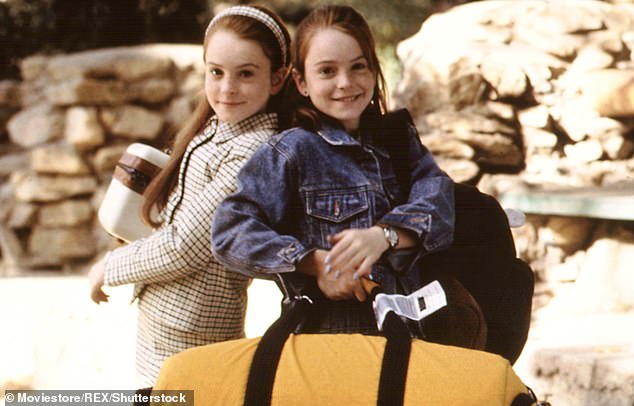 Cute classic: Lindsay starred as two identical twins separated as babies who scheme to switch places to meet their other parents for the first time in years; still from The Parent Trap

The Parent Trap was co-written by Meyers and Shryer with David Swift, based on the 1961 film of the same name.

In addition to Lohan’s dual roles, Dennis Quaid and Natasha Richardson starred as their parents, who each have custody of one twin daughter but lived on opposite sides of the Atlantic after separating.

Coincidentally, they send their daughters to the same summer camp in the US, where they hatch a plan to switch identities in order to spend time with the parents they haven’t seen since they were babies.

The film was a critical and commercial success and grossed $92 million against a $15 million budget. 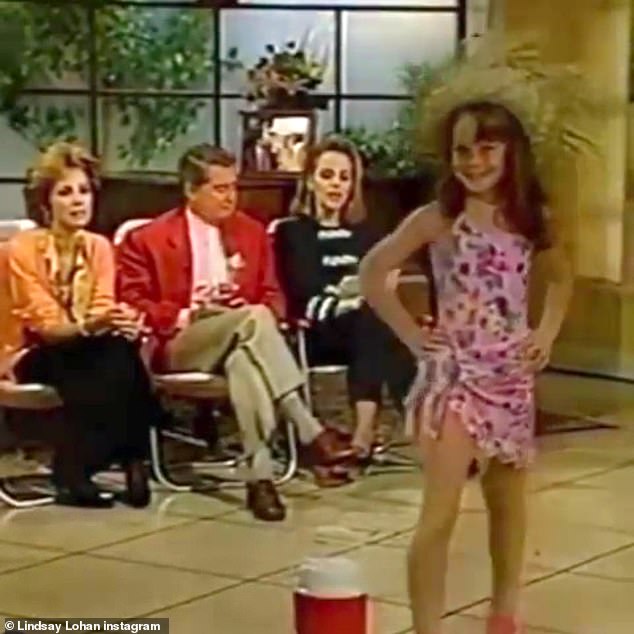 Old school: The Mean Girls star was in a nostalgic mood earlier this month when she shared an even older clip from an episode of Live With Regis And Kathie Lee from when she was only eight

The Mean Girls star was in a nostalgic mood earlier this month when she shared an even older clip from an episode of Live With Regis And Kathie Lee from when she was only eight, four years before she appeared in The Parent Trap.

The child model was described as ‘the belle of the boardwalk’ by Kathie Lee Gifford and was seen showing off some colorful beach clothing.

Prior to making her acting debut, she had worked as a children’s clothing model, before graduating to filming commercials and soap operas.