Lindsay Vonn vows to become the greatest skier of all time

Lindsey Vonn talked about closing out her Olympic career today and said she looked forward to taking on male opponents and breaking the record for World Cup wins.

Ms Vonn, 33, who is leaving Korea after her fourth Olympics, said she would not consider total retirement from the sport until she had become the greatest skier in the world.

To achieve that she requires six more World Cup winning races to overtake the record held by Sweden’s Ingemar Stenmark, who retired 20 years ago.

Pictured, United States’ Lindsey Vonn smiles in the mixed zone after the women’s combined at the 2018 Winter Olympics in Jeongseon, South Korea

Ms Vonn won a bronze in the women’s downhill and has talked during her time in Pyeongchang of loneliness, being single and even sent out a tongue-in-cheek Twitter message asking for a date on Valentine’s day.

She has also hit out at the ‘savage abuse’ aimed at her on the internet after she declared that President Trump did not represent her.

She said: ‘I think I made my grandfather proud. It’s definitely the most emotional I’ve ever been at a race before.

‘In the end, I gave it absolutely everything I had. I didn’t ski nervous, I skied with passion and heart.

‘Bronze (in the downhill) honestly does feel like gold to me. It’s been an amazing Olympics and a great way to close out my career in the Olympics.’ 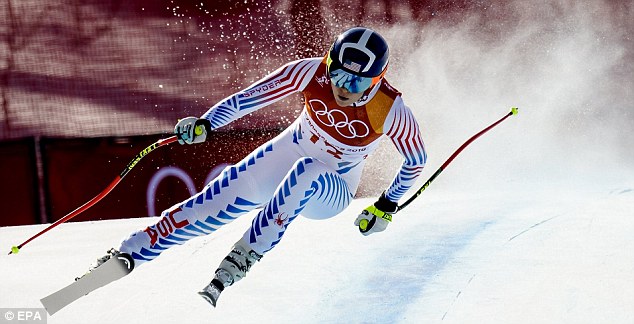 Pictured, Lindsey Vonn of the USA speeds down the slope during the Downhill portion of the Women’s Alpine Combined race at the Jeongseon Alpine Centre during the Pyeongchang 2018 Olympic Games

Asked about the World Cup record of 61-year-old Mr Stenmark, she said: ‘I’m not going to stop ski racing until I break it.

‘I think next year will go a lot better and with my focus shifting to the World Cup instead of the Olympics, it will give me more time to really be prepared for each race.

‘So next season, I think I can get it done. I hope I get it done because I’m not getting any younger.’

Ms Vonn, a multi-millionairess, said medals were not the most important thing in competing in the Olympics.

‘I think the expectation of winning gold medals is pretty out of whack and I think we need to be proud of all our athletes for how much they’ve put in to be here.

‘So to quantify it on how many medals you have is not appropriate and doesn’t respect the athletes in what they put in.

‘I definitely have a different perspective than the last time I was on the Olympic podium. I’ve been through a lot, physically, emotionally, mentally. I am more mature. I have learned a lot this past eight years.

‘I’ve crashed a lot, more than any human should but I’m stronger because of it. I appreciate everything so much more. 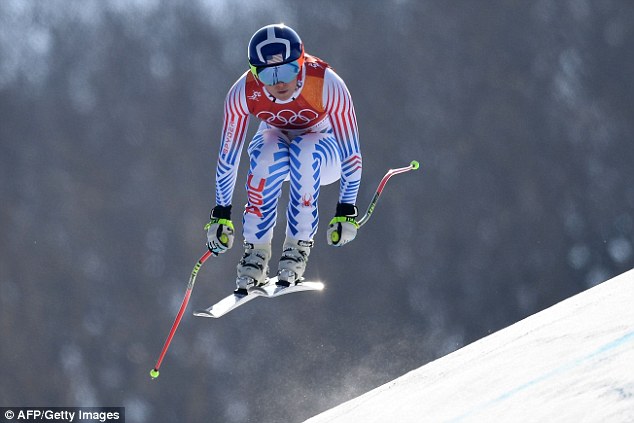 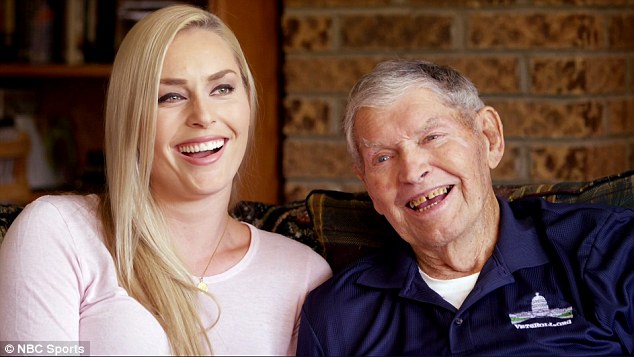 Pictured, Lindsey Vonn with her grandfather. Ms Vonn, 33, scattered her grandfather’s ashes neara  downhill course in Korea, where he served in the War, during the 2018 Winter Games

The Vancouver 2010 gold medallist said she would one day be able to get approval from skiing authorities to compete against the opposite sex.

‘It’s complicated on many fronts. It’s still something I’d like to achieve. I don’t know if I’m as physically as strong or as competitive as I once was.

‘However, I’d still like the opportunity to try. This past summer I was still beating a lot of the guys in training so I think I could still hang with the guys. But the biggest issue is trying to get it approved by the International Ski Federation.

She said Pyeongchang downhill gold medal winner Sofia Goggia, who beat her this week, had pleaded with her to compete in Beijing in 2022.

Ms Goggia described Vonn as the ‘greatest skier ever’ minutes after winning the gold against her.

Ms Vonn said: ‘Last night she wanted to talk to me and she was trying to convince me to keep going to 2022. It means a lot to me that she enjoys racing with me as much as I enjoy racing with her.

‘I respect her very much and I told her if I physically can continue for four years, then I probably would as long as I still considered myself a competitor. But four years is a really long time.

Vonn, who said her life had been a ‘roller-coaster’ since winning gold in 2010, was looking forward to enjoying the rest of the Olympics and added: ‘I need a break. I need to breath.’