Lindsey Graham defended Donald Trump on Sunday, insisting he had ‘no problems’ with the president’s July conversation with Ukrainian President Volodymyr Zelensky.

‘I have zero problems with this phone call,’ the Republican senator from South Carolina told CBS News Sunday morning, but added, ‘I do have a problem with Nancy Pelosi.’

Graham accuses Democrats of hiding behind the House Speaker instead of actually voting to open an impeachment inquiry.

‘If you believe that Donald Trump did something to hurt this country, you owe it to vote not talk about impeaching the president. The only way to open an impeachment inquiry is to vote,’ Graham said.

Pelosi announced Tuesday that the House was opening an impeachment inquiry into the president following revelations of a July phone call where a whistle-blower alleged Trump pressured the Ukrainian to probe Joe Biden and his son Hunter Biden. 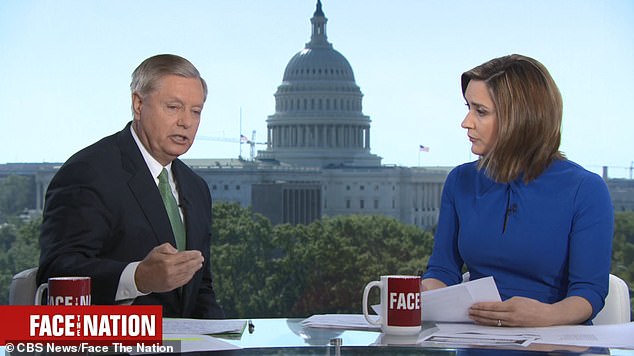 Graham also said he has ‘zero problems’ with the president’s phone call with Ukrainian President Volodymyr Zelensky, which some lawmakers say are concerning since in it he urges the foreign leader to probe Joe Biden and his son Hunter Biden 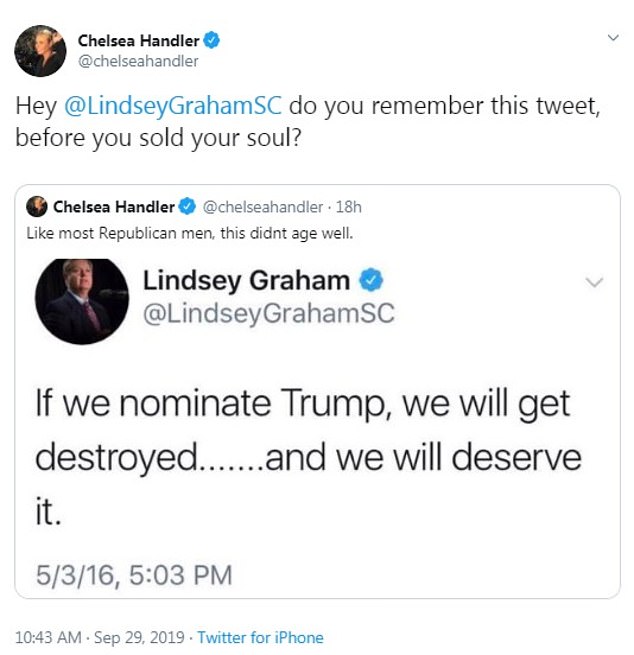 As he upped his defense of the president, Twitter recirculated a 2016 tweet where Graham said if Trump became the Republican nominee the party would ‘deserve’ to ‘get destroyed’

Trump released an unredacted transcript of the phone call, allowing lawmakers to make their own conclusions about whether the president discussed anything improper.

About a week before his July 25 call, the president ordered a freeze of almost $400 in military aid to Ukraine, causing some to suggest Trump was setting a quid pro quo for aid in exchange for Zelensky opening an investigation into Trump’s top political rival.

‘Quit hiding behind Nancy Pelosi,’ Graham chastised following a week of several on-the-fence Democrats calling for the president’s removal from office. ‘If you think the president did something wrong in this phone call than vote to open up an articles of impeachment inquiry. And a lot of House Democrats won’t because they’re afraid.’

Graham cooled off from the fiery exchange on the golf course with legendary golfer Gary Player and Donald Trump before they all returned to the White House on Saturday. 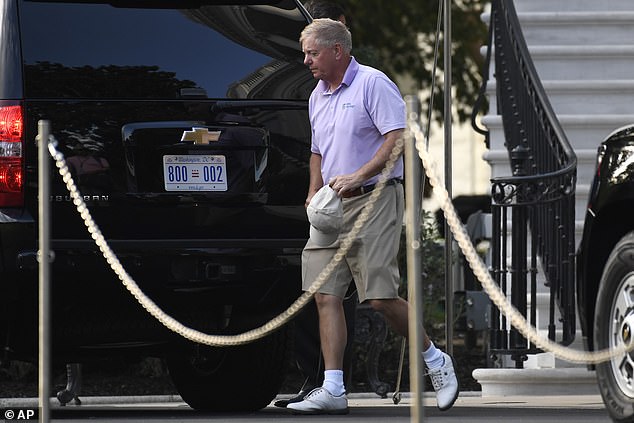 Sen. Lindsey Graham, R-S.C., gets out of the car after returning to the White House  with President Donald Trump following a day spent playing golf Saturday 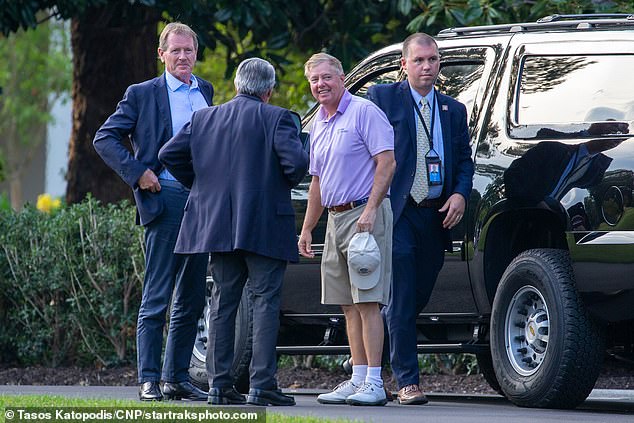 Graham, who was wearing a colorful shirt with beige shirts and white sneakers, was spotted with  security at the White House 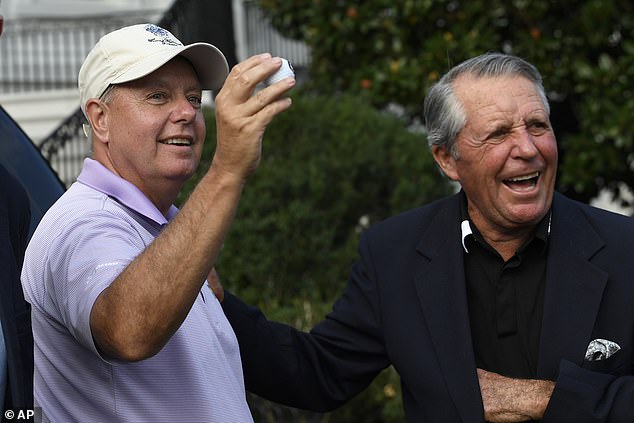 Sen. Lindsey Graham, R-S.C., left, holds up a golf ball as he shares a laugh with golfer Gary Player after they returned to the White House

While Graham upped his defense of the president if the past week, the Twitter World erupted over the weekend in recirculating a May 2016 tweet where the senator said the GOP should be ‘destroyed’ if it nominated Trump to be its candidate

‘If we nominate Trump, we will get destroyed,’ he tweeted before Trump became the party’s candidate in 2016, ‘and we will deserve it.’

‘Hey @LindseyGrahamSC do you remember this tweet, before you sold your soul?’ comedian Chelsea Handler tweeted Sunday morning.

Others have reposted an image of his tweet, claiming they want to remind the Republican senator of where he stood just a few years ago.

During his CBS appearance Sunday morning, Graham also repeated a talking point of the president, claiming that Biden’s actions need to be investigated. 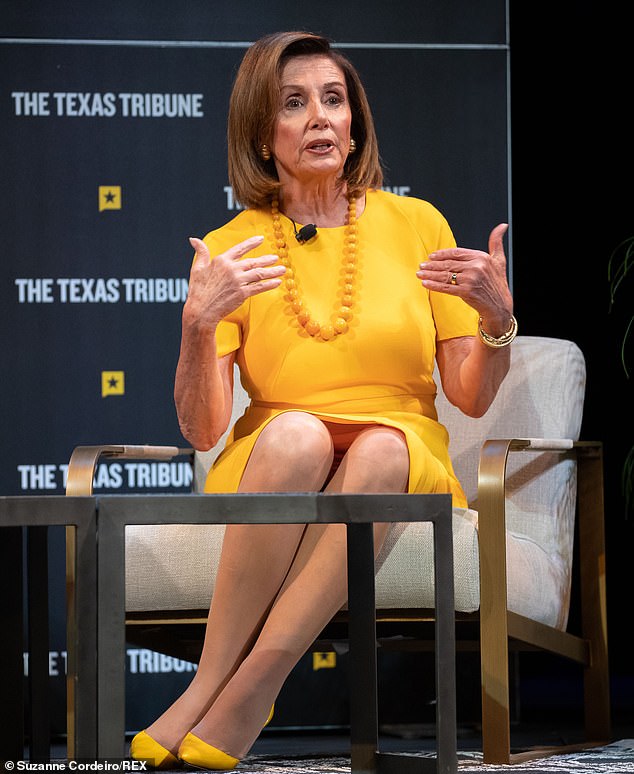 His son Hunter accepted a board position with Burisma Holdings, a Ukrainian natural gas firm, in 2014 – while Biden was still serving as Barack Obama’s vice president. Hunter reportedly earned $50,000 per month while serving on the board, which he stepped down from last year.

The move raised eyebrows in Washington, but the administration at the time claimed there was no conflict of interest because Hunter is a private citizen.

Biden also claimed he never spoke with Hunter about his business in Ukraine, but his son contradicted this in an interview earlier this summer where he detailed a conversation he had with his father about his foreign position.

‘Nobody’s asking about Joe Biden calling for the guy to be fired who’s looking into a board his son sits on,’ Graham lamented about the former vice president and now-2020 candidate’s involvement in his son’s Ukraine business dealings.

Graham wants an outside council, similar to what Robert Mueller did when he investigated Russian interference, to probe the situation.

‘Find somebody – not me – outside of politics to look and see if it makes sense,’ he continued. ‘I love Joe Biden as a person, but we cannot give Democrats a pass to go after Republicans.’