South Carolina Sen. Lindsey Graham, who delivered a tearful speech to the Senate about John McCain, says he told President Trump the president’s handling of his friend’s death ‘p***es me off.’

Graham revealed that he shared his anger with the president in an interview as the on the day the first of three memorial services for the American hero took place.

He did not say when he gave the president the admonition – but revealed that he pushed aides to bring the White House American flag back back to half-staff Monday.

“It p***es me off to no end, and I let the president know it,’ Graham told CBS in an interview.

“It p***es me off to no end, and I let the president know it,’ Graham told CBS

He said he didn’t call Trump to get him to lower the White House flag to half-staff – but acknowledged pressuring Trump’s aides.

‘No, but I called some people around him,’ he said.

‘I am going to do everything I can to help President Trump, and when he’s wrong, I will say so,’ Graham said. ‘It bothers me greatly when the president says things about John McCain.’ 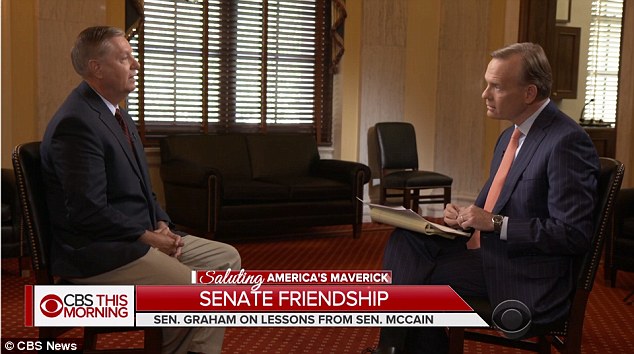 Graham revealed his anger at Trump to John Dickerson on CBS 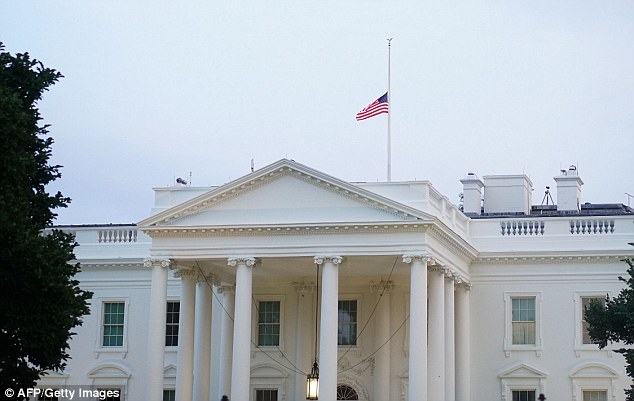 Graham tangled with Trump during the presidential campaign – the president famously released the senator’s personal cell phone during a campaign rally – only to become a confidant and golfing partner of Trump’s.

But he also brushed back the president on other topics during the interview, including with a blunt warning not to interfere in the Mueller probe, which Trump calls a ‘witch hunt.’

‘The way he’s handled the passing of John is just, was disturbing. We finally got it right. … I am not going to give up on the idea of working with this president. The best way I can honor John McCain is help my country. 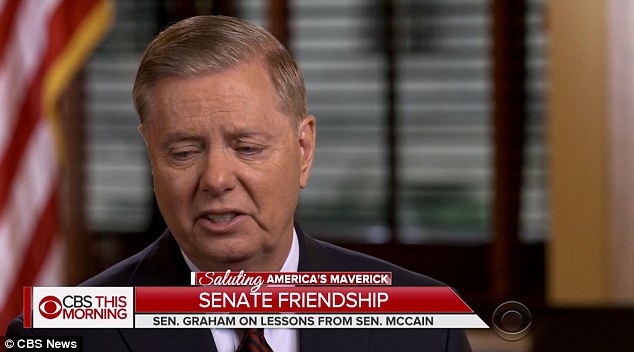 Graham was friends with McCain for two decades

‘Well, as long as I’m around, I’ll remind him of how this game plays. I’ve been involved in the impeachment of Clinton. I understand the process pretty well,’ Graham said.

‘Here – here’s what I’ll tell the president. There is no scenario where you can end this investigation, the Mueller investigation, through some political intrigue, and survive. That’s the end of you.’

‘The only person in America that can clear Donald Trump is Mueller,’ Graham said. 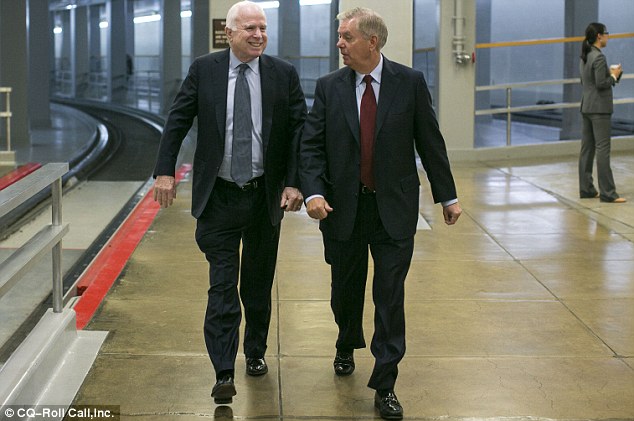 Graham delivered a tearful tribute to McCain on the Senate floor this week.

‘To those who are striving as a young person, remember John McCain. He failed a lot but he never quit. And the reason we’re talking about him today, and the reason I’m crying, is because he was successful in spite of his failures,’ Graham said on the Senate floor Tuesday afternoon.

He added: ‘I do not cry for a perfect man. I cry for a man who had honor and always was willing to admit to his imperfection.’

In his nearly 20 minutes of remarks, Graham recalled McCain’s fondness for bad jokes, his service to his country and how he believes ‘there is a little John McCain in all of us.’

After his remarks, Graham talked to reporters about his friendship with McCain and relayed the advice the late senator gave him on dealing with President Donald Trump: ‘Help him when you can, just don’t get sucked into all this bull****.’

Graham added: ‘I said ‘roger.’ So I’m going to help him where I can and not get sucked into all the other drama.’