Line of Duty stars Vicky McClure and Martin Compston have teased a potential return of the hit BBC show – so they can give the show the send off party it properly deserves after filming the last series during the coronavirus pandemic.

The actors who play DI Steve Arnott and DI Kate Fleming respectively in the crime series fueled rumours of a new season earlier this week when they were photographed having drinks with co-star Adrian Dunbar and show creator Jed Mercurio.

The duo who are taking part in Sunday’s Soccer Aid, appeared on Friday’s Good Morning Britain with Kate Garraway and Ben Shepherd and were asked if fans can expect another instalment from AC-12.

Show host Kate put Vicky on the spot asking if they were planning a seventh series following the now viral image of the cast after they reunited earlier in the week.

The 39-year-old was give nothing away and coyly answered: ‘Nothing’s planned as yet – we just went out for a nice meal!

She added: ‘Like Martin said before, we always have a long break in between series so it’s not really too abnormal to what we normally do.’

Greenock-born Martin, 38, chimed in: ‘We’re chuffed that people still want us to come back. 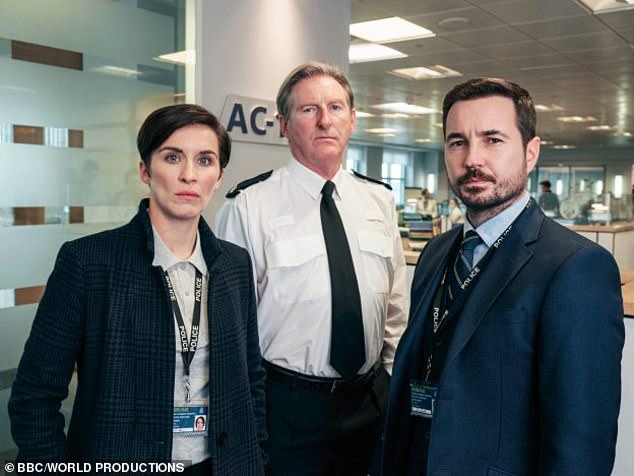 AC-12 reunited: Martin who plays y DI Steve Arnott in the series says he hopes they can give the show the send off party it properly deserves

We’ve done ten years now, and the fact that people still want to see the show is amazing and if there’s still a story to be told, I’m sure Jed will bring us back.’

Vicky, who was last on screen in new ITV thriller Trigger Point Kate added: ‘We adore working with each other. Jed’s writing is phenomenal.

‘We’ve been working together for ten years now and the last series was incredible in terms of the response that we got. It was really quite tough to shoot because it was in covid so it would be lovely to go back and not end that kind of way.’

Martin went on to say: ‘For a sociable night out, it’s not a reason to recommission a series, but it’s such a sociable job in terms of the crew and all us hanging out.’ 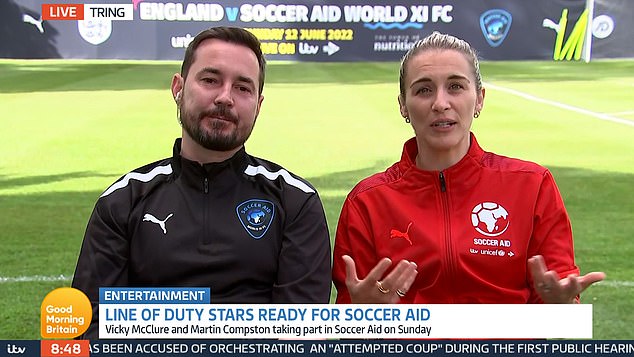 Favorites: The actors have given fans hope of a seventh season of the hit crime drama 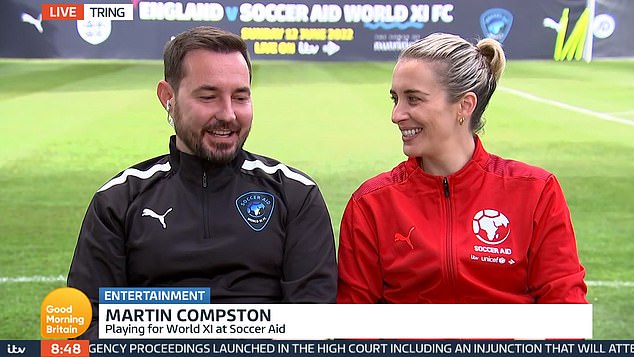 Off screen pals: The actors who play DI Steve Arnott and DI Kate Fleming respectively in the crime series were in great form as they teased fans with a possible seventh series

‘I think we were the first job back over covid and we couldn’t see each other, hang out at night we couldn’t do anything – it wouldn’t be a great way to end it so – it’s not the way to recommission a job!’

The appearance comes after fans of the hit show have been left convinced a new series is secretly in the works after the duo along with their co-star Adrian Dunbar reunited with creator Jed Mercurio for a pub outing on Tuesday evening.

Martin delighted viewers of the police drama as he posted a photo of the group on his Twitter page, with the gang enjoying beer and wine as they perused their menus.

Joking that they were ‘talking tattoo designs’, social media erupted with fans convinced this was a sign that the much loved show would soon return for a seventh series. 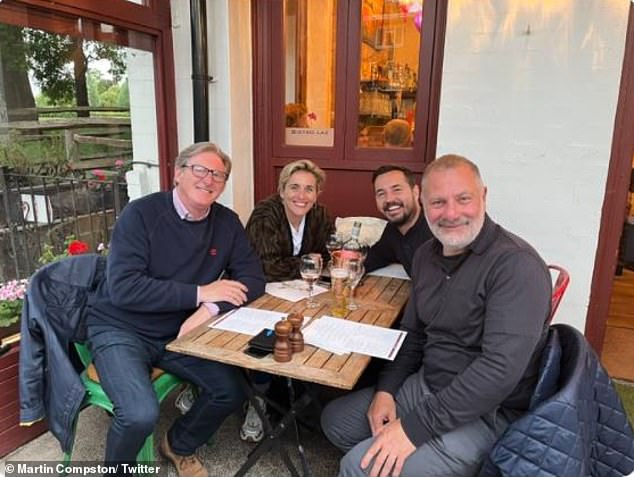 Beaming for the camera, the Scottish actor was joined by Vicky, Adrian Dunbar (Ted Hastings) as well as the show’s creator Mercurio.

Martin wore a dark sweater as he sat at the outside wooden table enjoying a glass of white wine.

Vicky cut a casual figure in an oversized cardigan as she wore her blonde hair away from her face.

Fans went wild at the sight of the actors reuniting, with one writing: ‘New LOD [Line of Duty] script under the menus?’ 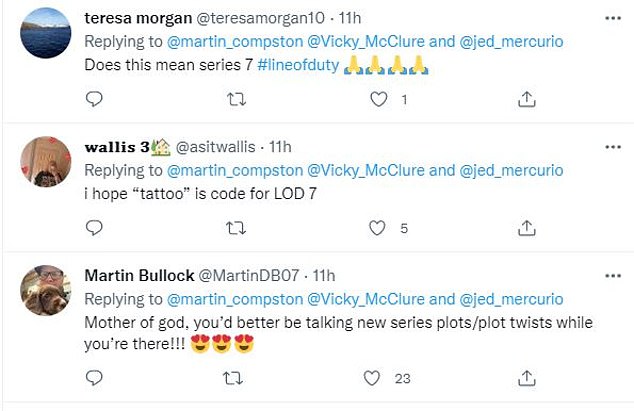 Wild: Fans went wild at the sight of the stars reuniting, racing to Instagram hoping that a new series was on the horizon

While a second added: ‘Does that mean series 7?’.

And third commented: ‘I hope ‘tattoo’ is code for LOD 7′.

And another agreed: ‘Mother of god, you’d better be talking new series plots /plot twists while you’re there’.

This comes after Martin said recently there is ‘definitely scope’ for a seventh series but people will ‘have to wait and see’.

The actor was asked on The Chris Moyles Show on Radio X if the programme was still being made and he told the host ‘we think so’.

Speaking about then future of the show, Martin said:  ‘I think there is definitely scope for it.

‘I mean, look, I’m delighted with the response, in terms of people are now really intrigued to see if there is another one, but there’s nothing changed for us in terms of where we’re at after we finish a series.’

He went on to say there was usually a break of at least year between each series before ‘the dust settles and Jed figures out whether there’s a story to tell’.

Series six of the show ended in the spring of 2021 with viewers finally discovering who the mysterious ‘H’ was.

He said: ‘So I’m delighted that people are so excited and so desperate to find out but, as I say, this is what we’ve done after every series so we’ll just wait and see what he thinks.’

The actor added that filming the sixth series was a ‘tough shoot’ because of coronavirus rules, and said ‘it wouldn’t be nice to go out that way’ as it’s such a sociable show.

He said: ‘We filmed the last one during Covid and all that, and it was a tough shoot and kind of miserable, because we were one of the first jobs back and it was literally on set, nowhere near anybody, and then back to your flat.

‘We couldn’t even mix with each other. So I think for us, it wouldn’t be nice to go out that way, we’d like to do one more…’ 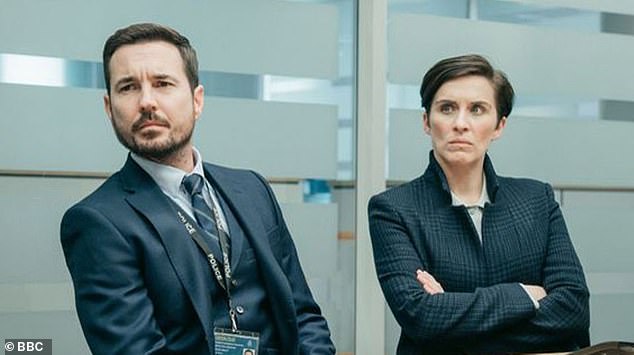 Fingers crossed: This comes after Martin said recently there is ‘definitely scope’ for a seventh series but people will ‘have to wait and see’ (pictured in season six)