Rolling Stone reports that more than 17,000 people came out to the Hollywood Bowl on Friday night to honor Bennington, who died by suicide in July.

‘I don’t have the words,’ Mike Shinoda, the band’s rapper, told the crowd. ‘I don’t think any of us do.’ 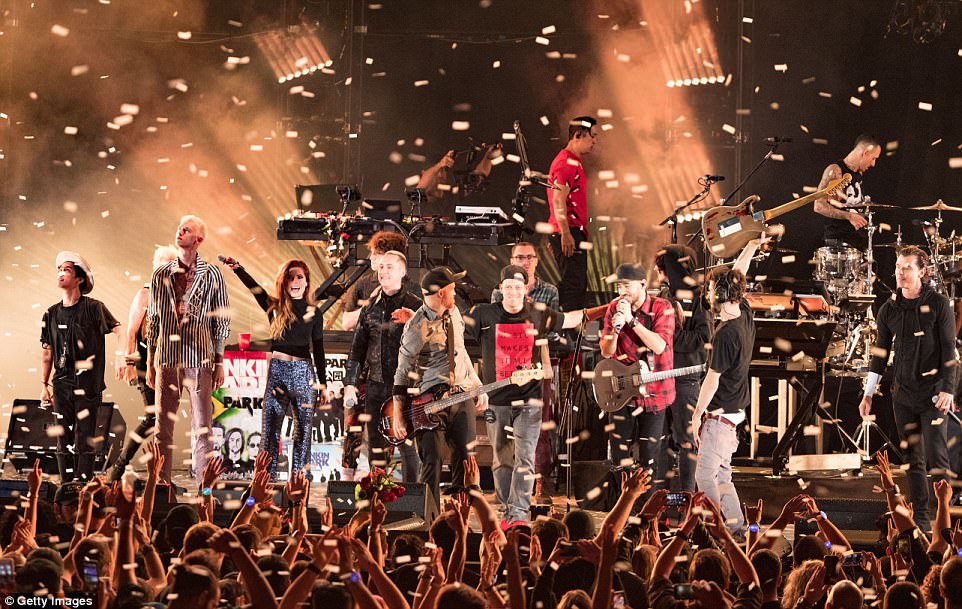 Bandmates and special guest performers are pictured onstage during the finale for the concert, called ‘Linkin Park And Friends Celebrate Life in Honor of Chester Bennington’ 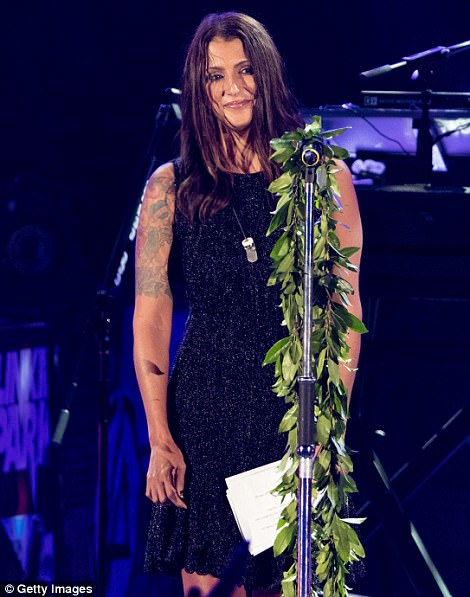 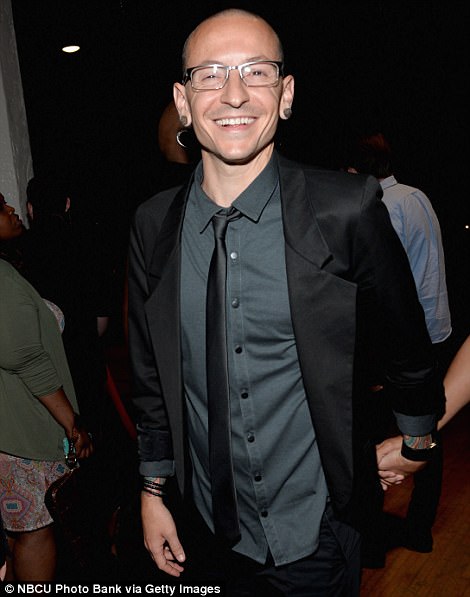 Bennington’s widow, Talinda (left), gave a speech during which she said Chester ‘would have loved this’. Bennington (right) died by suicide in July

Special guest performers included Blink-182, Alanis Morissette, Julia Michaels, and members of the bands No Doubt, Yellowcard, Sum 41, System of a Down, Avenged Sevenfold, Bush and Korn, among others.

Bennington’s widow, Talinda, came on stage to address the crowd and said he ‘would have loved this,’ Variety reports.

She concluded her speech with the hashtags ‘F*** depression’ and ‘Make Chester proud’.

Shinoda, who acted as the night’s MC, echoed this sentiment. He said: ‘Keep Chester in your hearts and make him proud.’ 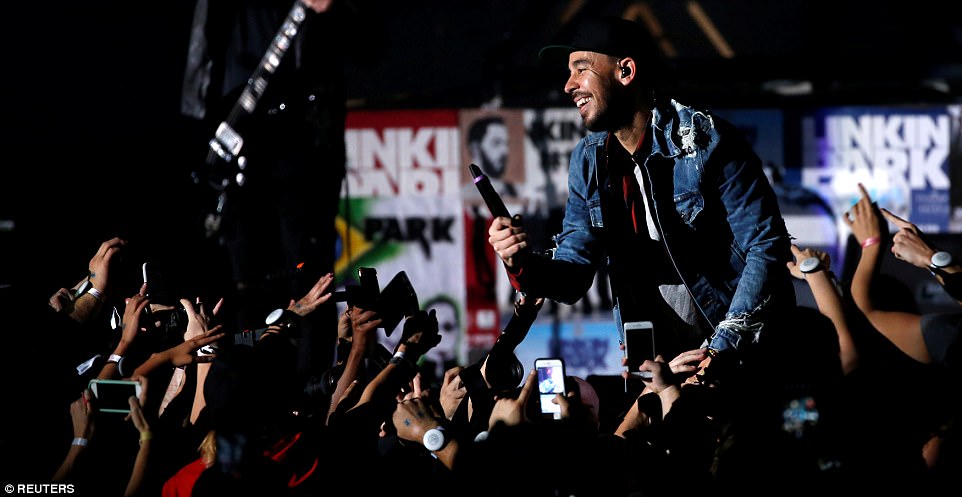 Shinoda (pictured) said during the concert: ‘Keep Chester in your hearts and make him proud’ 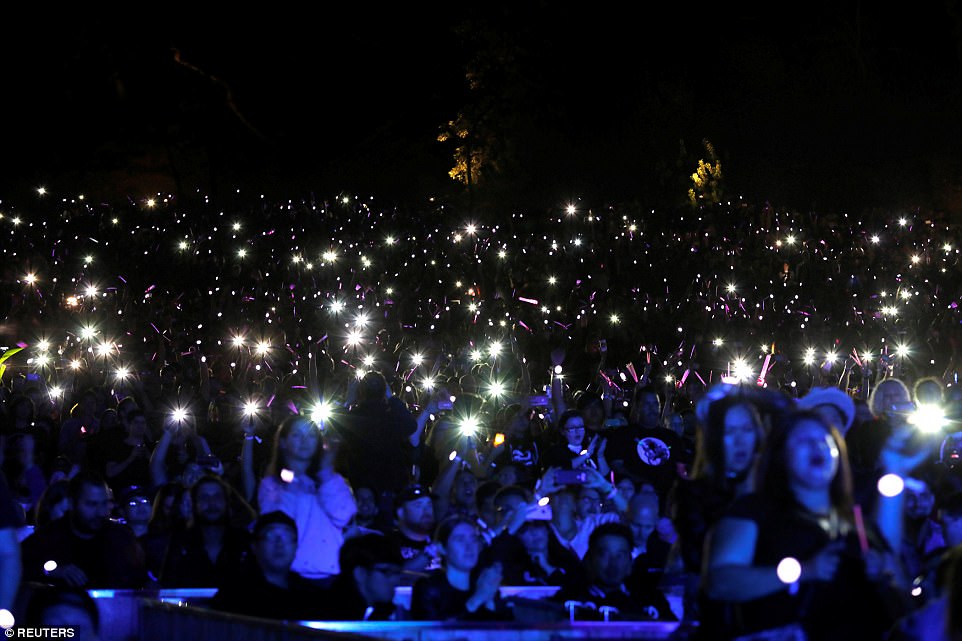 People shine lights from their mobile phones during the concert. More than 17,000 people attended the concert 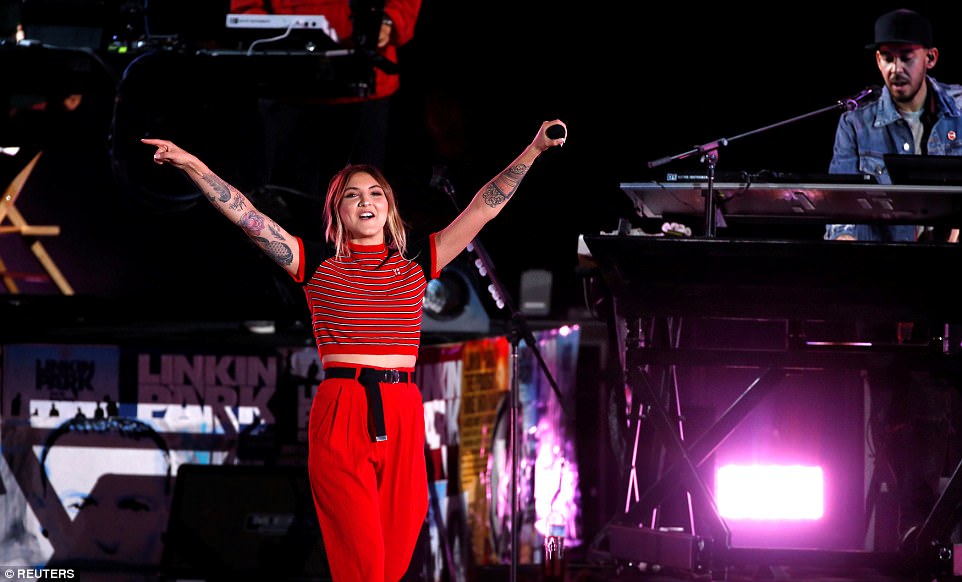 Julia Michaels, of ‘Issues’ fame, was a special guest performer. Other guests included Blink-182, Alanis Morissette, and members of the bands Yellowcard, Sum 41, System of a Down, Avenged Sevenfold, Bush and Korn 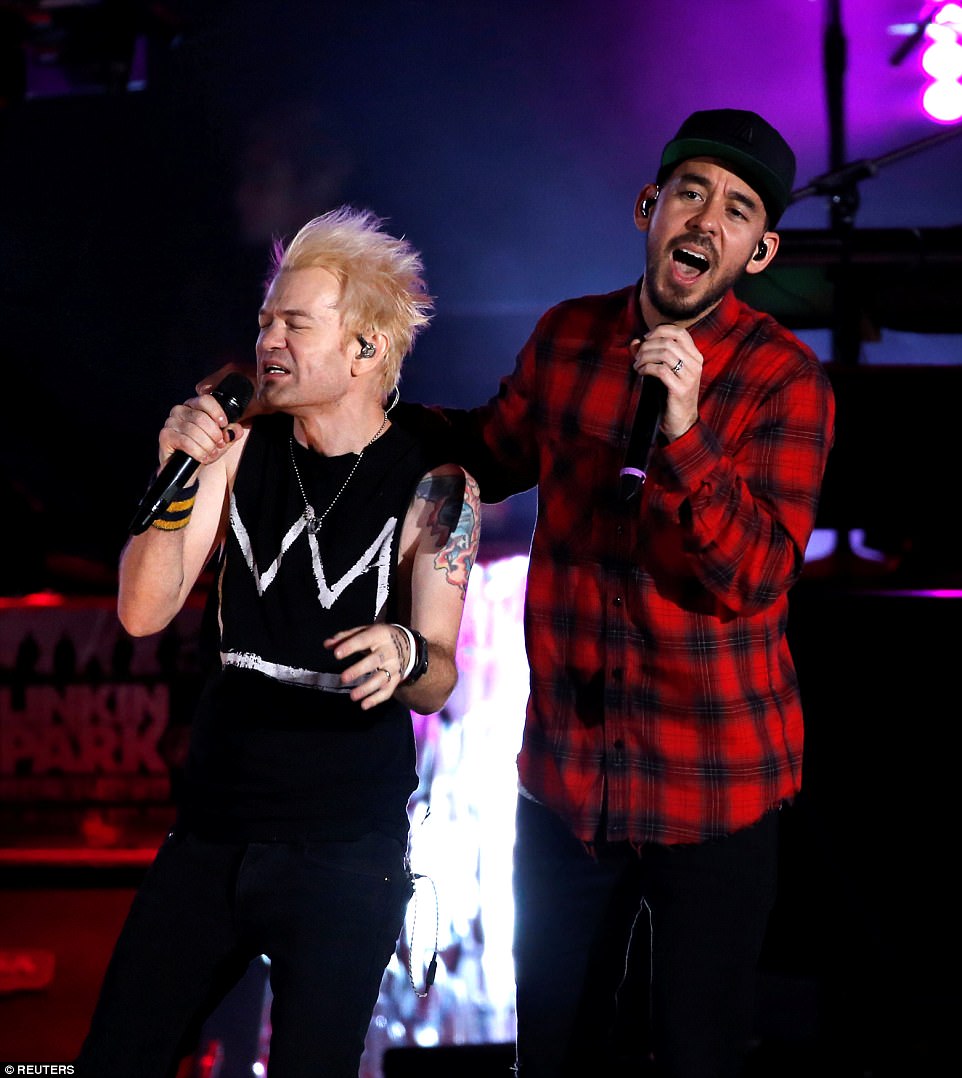 Shinoda is pictured performing with Deryck Whibley of Sum 41 at the tribute concert to Bennington. ‘I don’t have the words,’ Shinoda told the crowd. ‘I don’t think any of us do’

The concert occurred the same week it was learned that Bennington left all his worldly possession to his wife and all six of his children.

The singer’s will named his wife Talinda and their three kids, as well as his three kids from his previous marriage, as beneficiaries.

According to the documents obtained by TMZ, certain accounts – such as retirement – will go directly to his widow.

The rest of his assets go to the Chester and Talinda Bennington Family Trust, which was created in 2007.

Talinda is named executor of the will, and has the power over all of Chester’s musical rights and interests.

The 41-year-old died by suicide on July 20. He was found dead in his home on the Palos Verdes peninsula. 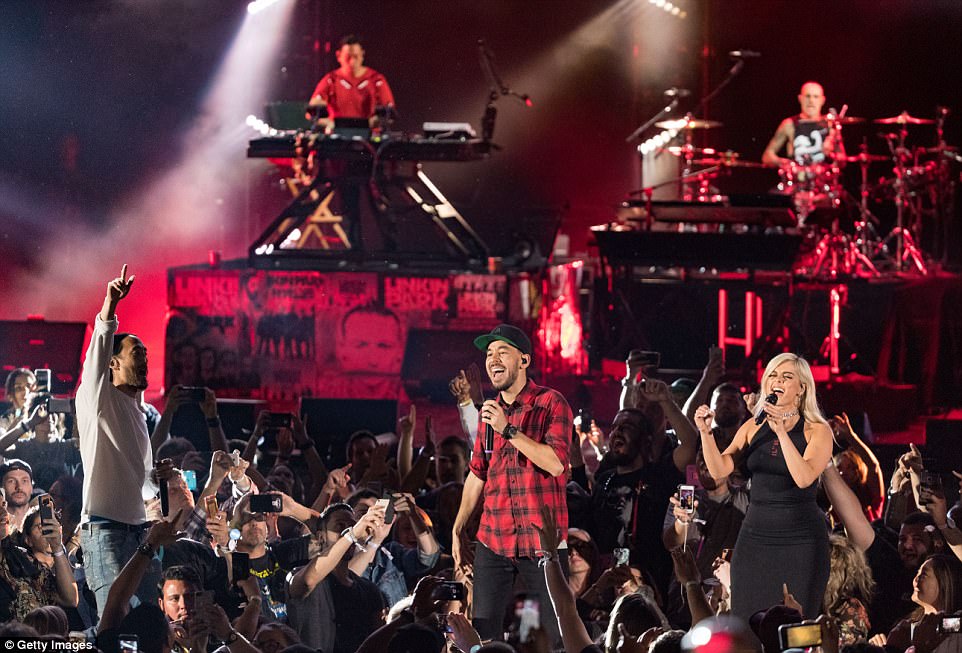 Shinoda is pictured performing with guests, including DJ Steve Aoki at left 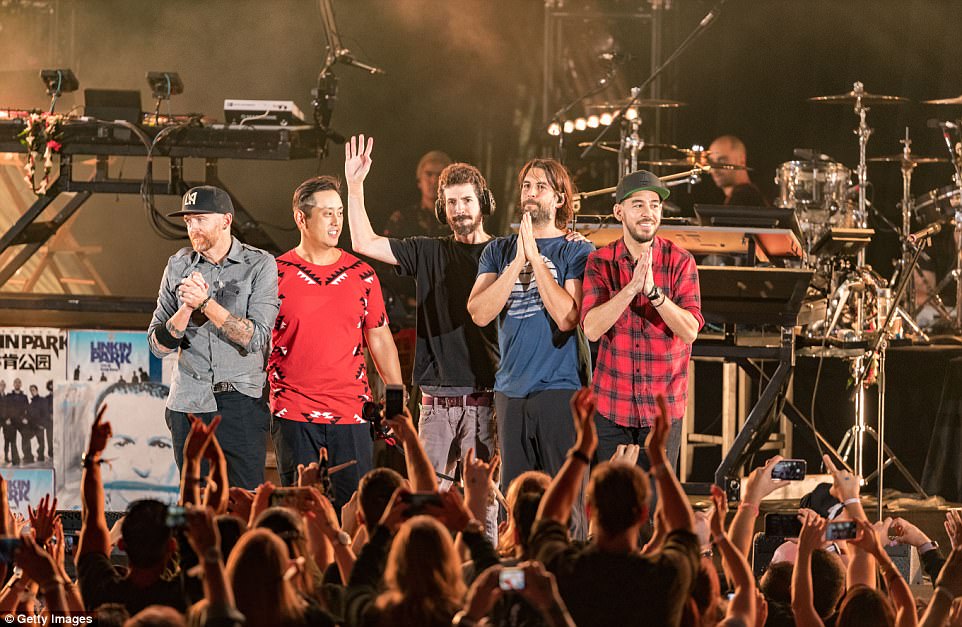 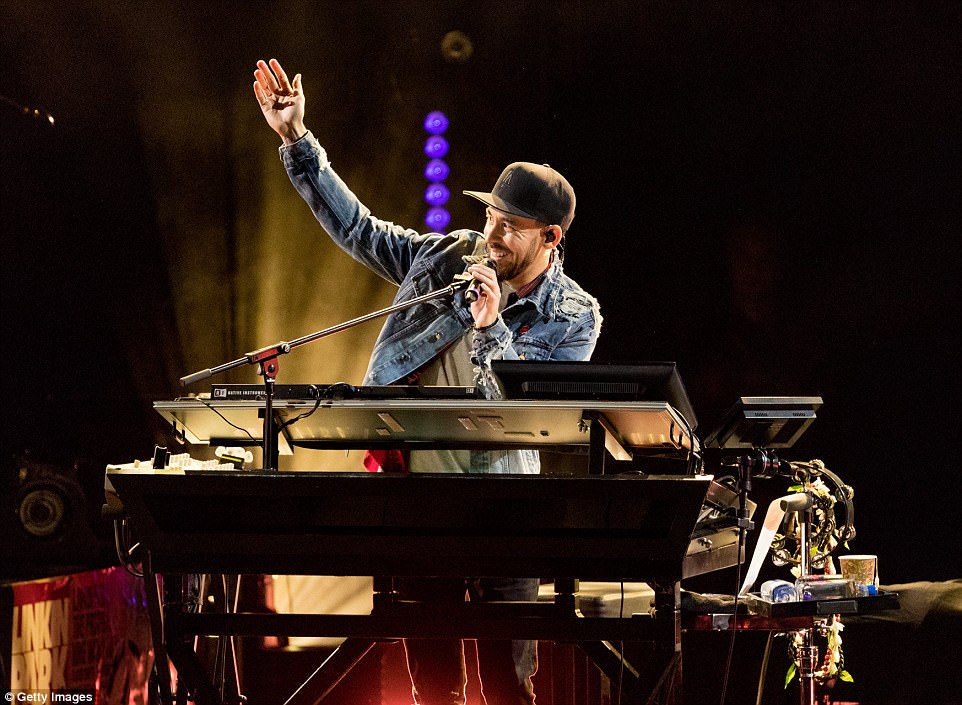 Shinoda acted as the MC for the event honoring Bennington, who was found dead in his Palos Verdes, California home on July 20 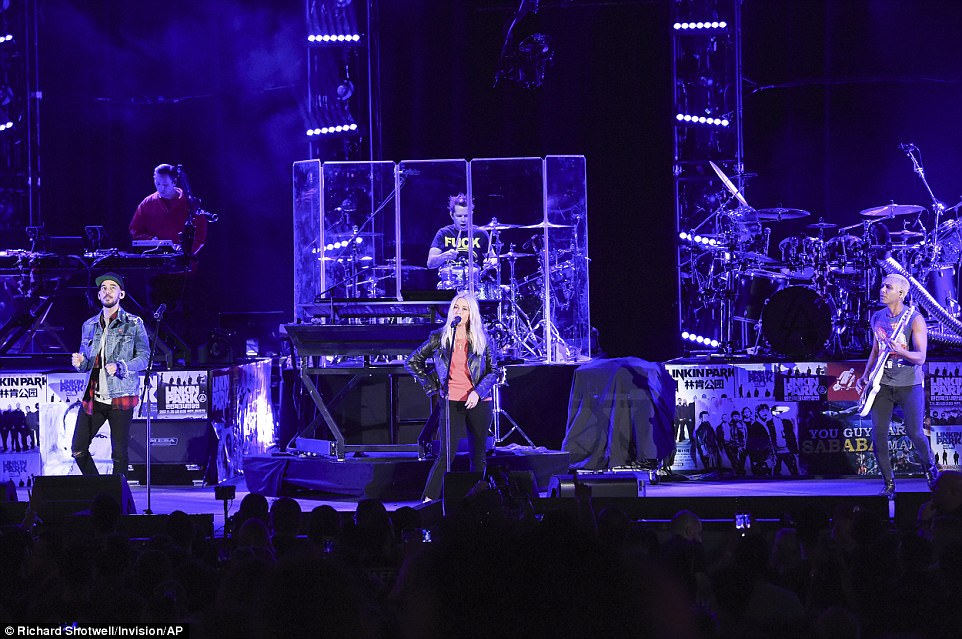 Alanis Morissette (center) performs with Shinoda (left) and Tony Kanal (right), the bassist for No Doubt

Law enforcement officials said that he hanged himself from a door, in a similar manner to friend Chris Cornell, in his bedroom and he was home alone at the time, according to TMZ. He was found upstairs by his housekeeper.

After news of his shock death emerged, friends said that while they never suspected he’d kill himself, Bennington was ‘never the same’ after the death of his close friend Chris Cornell.

His apparent suicide coincided with Cornell’s birthday. The Soundgarden rocker killed himself in May by hanging.

Linkin Park was on tour following the release of the band’s latest album, ‘One More Light’. They had had a show at New York’s Citi Field scheduled for the next week with Blink 182. The band played together for the last time on July 7 in Birmingham, England.

Bennington was married to his second wife Talinda, a former Playboy model, for 12 years. He divorced his first wife Samantha Marie Olit in 2005 after nine years of marriage.

The frontman had been open about his history of substance abuse and admitted in one interview in 2011 that he had once been a ‘full blown, raging alcoholic’. 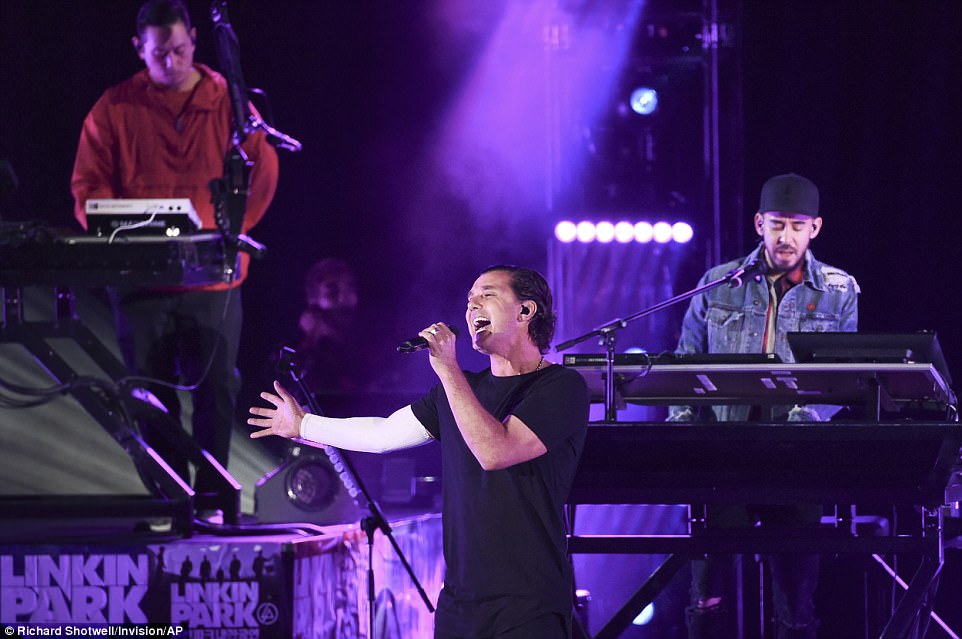 Gavin Rossdale, of Bush, performs during the tribute. Linkin Park, fronted by Bennington and Shinoda, sold 10 million copies of their 2000 debut ‘Hybrid Theory,’ and then another 4 million with 2003’s multiplatinum ‘Meteora’. Both albums explored feelings of frustration and fury. 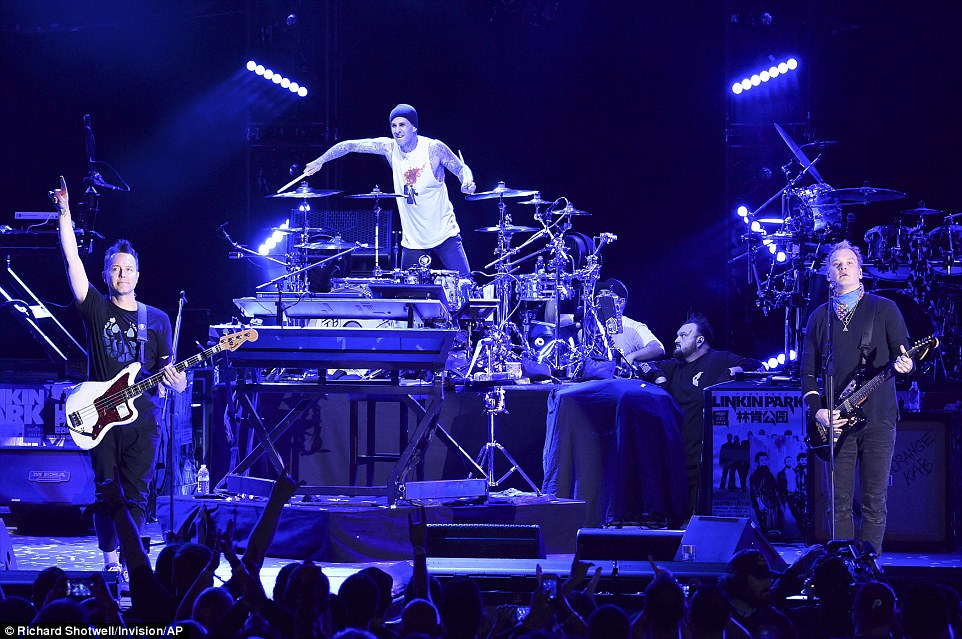 Members of Blink-182 perform during the event honoring the Linkin Park singer. The band won Grammys for best hard rock performance in 2001 for ‘Crawling’ and best rap/sung collaboration for ‘Numb/Encore’ in 2005 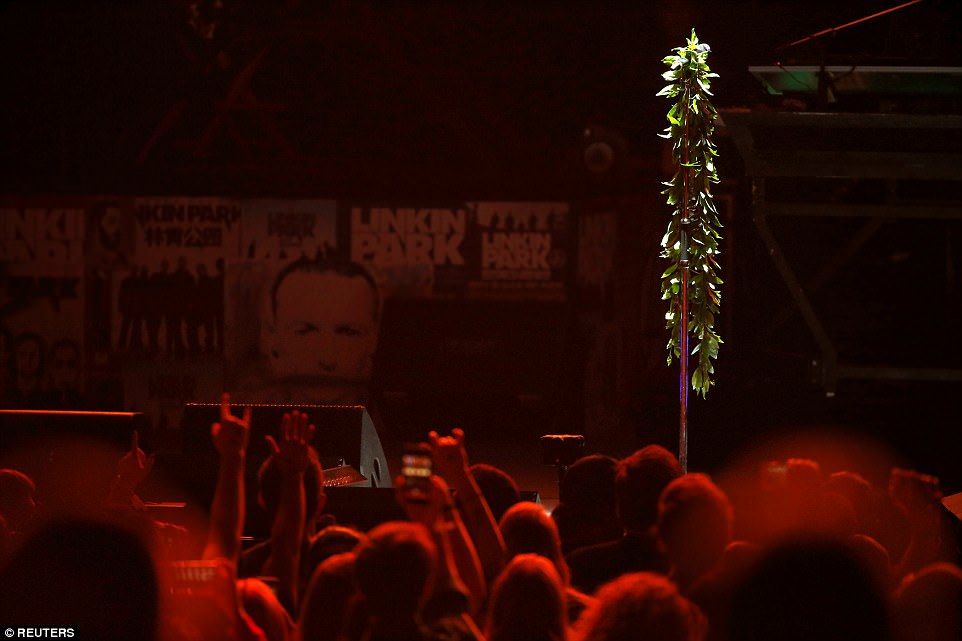 A wreath is pictured hanging on a mic stand during the tribute concert. Bennington previously said of his band’s music: ‘We’re making music for us, that we like. We’re not making music for other people’ 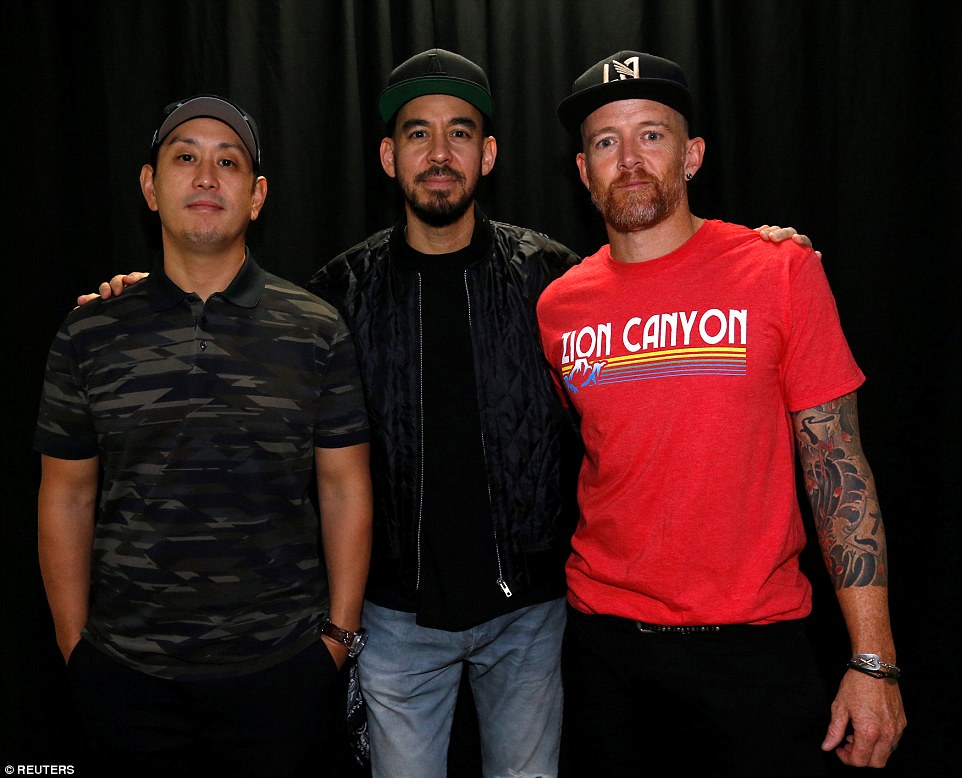 The Grammy Award-winning group, fronted by Bennington and Shinoda, sold 10 million copies of their 2000 debut ‘Hybrid Theory,’ and then another 4 million with 2003’s multiplatinum ‘Meteora’. Both albums explored feelings of frustration and fury.

They famously collaborated with JAY-Z in 2004 for Collision Course.

They won Grammys for best hard rock performance in 2001 for ‘Crawling’ and best rap/sung collaboration for ‘Numb/Encore’ in 2005.

Bennington formed his own band, Dead by Sunrise, as a side project in 2005. He was also the lead vocalist for Stone Temple Pilots from 2013 to 2015.

He told The Associated Press in 2010 that because of the sound the band is known for, it is virtually impossible to satisfy their many kinds of fans.

‘We’re not thinking, “Let’s make a pie-graph of all our fans and find out how many people fit in whatever category and then make the perfect album for them.” Like, that would be absolutely ridiculous.’

Those seeking support should contact the National Suicide Prevention Line on 1-800-273-8255, or visit suicidepreventionlifeline.org.