Lion King Ooshie back on the market after bidder fails to pay $100,000 asking price

A rare Woolworths Lion King furry Simba Ooshie will go under the hammer again after the winning bidder failed to pay the $100,000 asking price.

The coveted collectible sold for a staggering $99,900 on Monday, five days after it was listed at a $10,000 starting bid on eBay.

But the seller has re-listed the toy after learning the buyer made an offer just ‘for fun’.

‘[The bidder] said his daughter just bid it for fun, so we have to cancel his order and relist it again,’ he told 7News.

‘I do have some buyers [who] are serious and willing to pay a good price for it, but a couple of buyers are just doing it for fun.’

The rare Woolworths Lion King furry Simba sold for an eye staggering $100,000 just five days after it was listed on eBay – but the buyer failed to pay the asking price 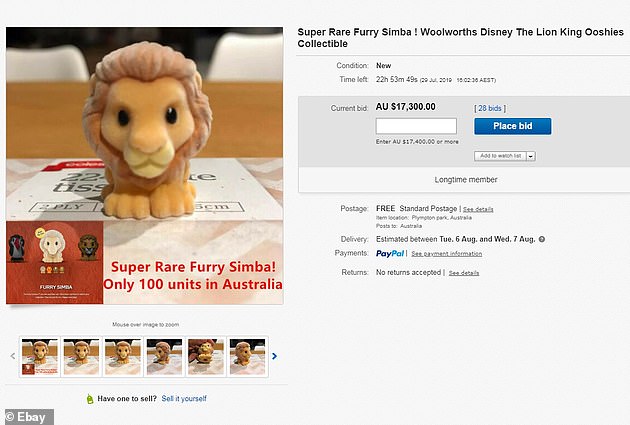 The ultra-rare furry Simba is continually popping on on eBay with starting prices as high as $17,300 (pictured)

There are only 100 furry Simba Ooshies in circulation and some sellers are taking to  eBay to try and flog the toys at a massive mark up.

Woolworths partnered with Disney and The Lion King to launch a range of 24 Ooshies in time with the release of the newest iteration of the film.

The Simba furry Ooshie is the only item with a limited number however some are still attempting to sell the less rare ‘Orange Sunset Simba’ for up to $45,000.

The Blue Mufasa collectible also popular on the online market.

One seller has listed a ‘super rare blue Mufasa’ Ooshie for a starting bid of $20,000.

Another seller, from Victoria, has advertised a gold Mufasa for $999, ‘cash only on pick up’. 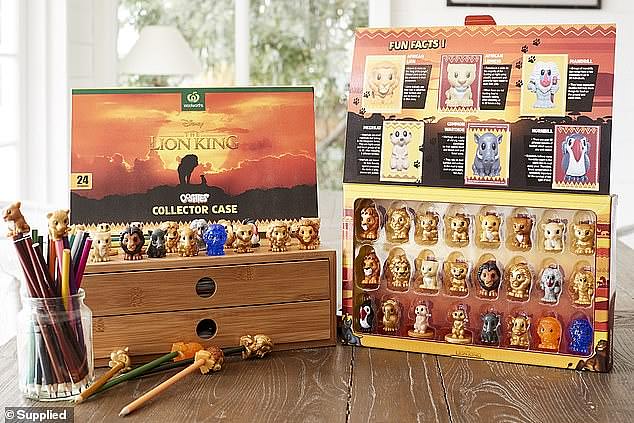 Woolworths shoppers are buying bonus products to earn more ‘Ooshies’ only to later return their purchases, an employee has revealed

‘You are bidding on a gold cub Simba, the future king of the pride lands. If you don’t have the ‘baby’ SIMBA you don’t have a story… it all starts here,’ one of the adverts read.

Meanwhile, Woolworths shoppers are buying bonus products to earn more ‘Ooshies’ only to later return their purchases, an employee has revealed.

Those trying to complete their collections honestly hit out at the ‘disgusting’ attempt to cheat the system after a post was shared to the Woolworths Lion King & Coles Mini Shop 2 Australia – Swap, Sell and Buy Facebook group.

‘That’s horrible. Everything I bought I used,’ one social media user wrote.

‘I don’t get people anymore. We can’t even collect stuff without being dodgy and dishonest,’ another added.

Others admitted they too bought products they didn’t need, but rather than return their shopping would donate them to a worthy cause.

‘Ooshie’ fans in the same Facebook group have openly shared how they buy the bonus products in bulk to maximise how many of the collectables they receive. 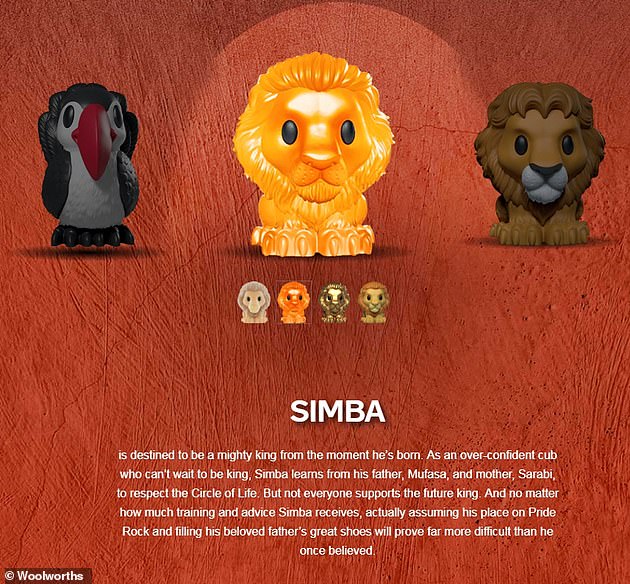 There are four different ‘Simba’ items to collect, including the gold, furry, orange and original

Those trying to complete their collections honestly hit out at the ‘disgusting’ attempt to cheat the system after a post was shared to the Woolworths Lion King & Coles Mini Shop 2 Australia – Swap, Sell and Buy Facebook group (pictured)

’25 bonus Ooshies would have cost at least $750 to get by shopping normally!,’ one shopper wrote as they revealed they only spent $60 to get the same amount.

The user shared a photo of her bonus purchases, which included multiple toothbrushes, hand soap and packets of ham.

Last week, it emerged some sellers were attempting to dupe buyers and cash in on the fun.

One buyer from Perth took to social media to shame a seller in his local area on Facebook Marketplace for attempting to dupe potential customers.

The seller, a man named Chris, originally advertised a Woolworths Simba Ooshie for $15, but jacked the price up to $500 when contacted to arrange a pick up time.

When the buyer not-so-politely refused the request, Chris seemed to think his price hike was wholly acceptable.

‘Did you think you hit the jackpot?,’ he asked.

While the $500 price tag may seem steep to some, other shoppers who stumbled across rare Ooshies in stores believe they’re sitting on a small fortune.

On Monday, managing director of The Walt Disney Company Australia Kylie Watson-Wheeler said: ‘We are beyond excited to welcome the all-new The Lion King to the big screen, with iconic characters that audiences have long treasured.

‘Our partnership with Woolworths will delight fans as they get to collect these long-treasured characters and introduce the beloved story to a new generation.’

Woolworths programs manager Sarah De La Mare said they wanted to offer their customers ‘something special’ to celebrate the launch of the blockbuster film.

‘We know that many Aussies love Ooshies, and this unique Lion King collection is something that Lion King fans will want to keep and treasure for a long time,’ she said.

Customers can purchase a Lion King Collector’s Album to house the Ooshies for $4.