Lionel Messi is the ‘best in the world’ – Antonio Conte

Lionel Messi was lauded by Antonio Conte after punishing Chelsea’s mistakes to send Barcelona through to the Champions League quarter-finals.

Conte took the opportunity to compliment Messi in person after the Argentina playmaker scored twice and made another for Ousmane Dembele in a 3-0 win which secured a 4-1 aggregate success for Barca.

‘When you have the opportunity to make a great compliment to Messi, I think it’s right,’ Conte said.

‘We are talking about an extraordinary player, the best in the world. I think we are talking about the player that can move the final result for every team that he’s playing for. This type of player, (there is) one player born in 50 years.’

After eight appearances without a goal against Chelsea, Messi settled this tie by scoring the equaliser in last month’s first leg before an influential performance here.

Messi struck after 126 seconds, netting through the legs of the hapless Thibaut Courtois, and struck his 100th Champions League goal, again through the Chelsea goalkeeper’s legs. Courtois admitted being at fault, telling BT Sport: ‘I didn’t expect Messi to shoot from there and I was too late to close my legs so that was a mistake on my part.

‘It’s not nice to start an evening like that. It’s my weakest point between my legs. It was unlucky on our side, but I think mostly it was our individual mistakes that cost us.’

Conte described the start as ‘terrible’, but was pleased with the response.

Chelsea hit the woodwork four times across the tie. Marcos Alonso hit the outside of the post with a free-kick and Antonio Rudiger the crossbar with a header here.

Conte also complimented his players, while feeling aggrieved his side were not awarded a penalty for a Gerard Pique challenge on Alonso when 2-0 down. 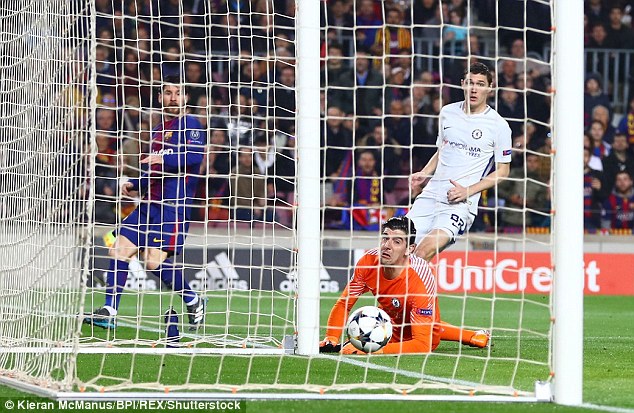 ‘There was a penalty on Alonso at the start of the second half,’ Conte added.

‘If you score (to make it) 2-1 you can put a bit of pressure on Barcelona. At the end, I must be pleased for the commitment of my players. They gave everything. We have to continue this in this way, with this will to fight, with this desire to play together.’

With Chelsea adrift of the Champions League qualification places in the Premier League, defeat to Leicester in Sunday’s FA Cup quarter-final and then to Tottenham on April 1 could result in a premature departure for Conte, whose position has been the subject of speculation all season.

Messi missed last Saturday’s win at Malaga to attend the birth of his third child and seized control of the tie on his return.

Barca boss Ernesto Valverde said: ‘That goes with Messi’s personality, the sense of responsibility that he has. He knows in certain moments stars have to come out. He forces himself to do that.’ 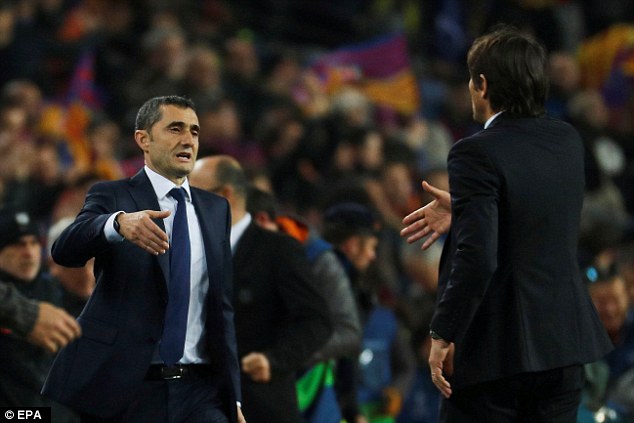