Lionel Messi was in imperious form as he put Chelsea to the sword at the Nou Camp on Wednesday evening.

The Barcelona talisman almost single-handedly dragged his side into the quarter-finals with two well-taken goals and an assist as the Premier League champions were swatted aside.

It was a performance worthy of praise and the sports newspapers across Spain were quick to lavish their praise upon the Argentine maestro. 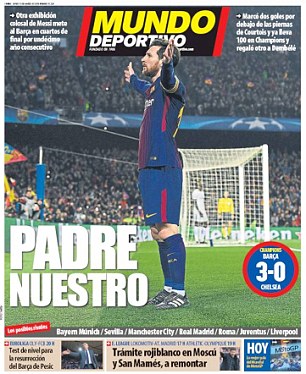 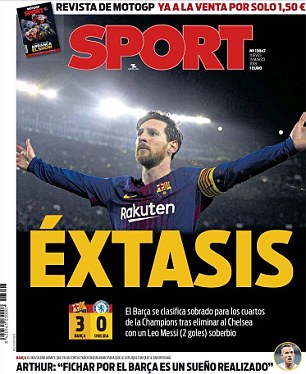 Mundo Deportivo used the headline ‘Our Father’, while Sport simply went with ‘Ecstasy’

Alluding to the recent birth of his son Ciro and his celebratory pose bearing a striking resemblance to Christ the Redeemer, Mundo Deportivo went with the headline ‘Our Father’ as the 30-year-old toasted his second strike to seal the tie.

Sport went for something a touch more simple, with the word ‘Ecstasy’ plastered across their front page, along with Messi with his arms outstretched.

Another chose to make a point of the striker’s preferred route to goal, with Marca’s ‘Euro Tunnel’ headline an ode to the two nutmegs suffered by Thibaut Courtois, as Messi posted the ball between his legs for both his strikes. 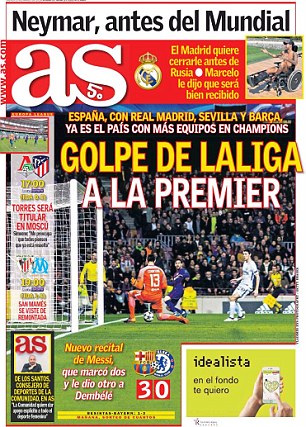 Marca alluded to the two nutmegs suffered by Thibaut Courtois, while AS had their own take

Meanwhile, AS have gone down a different route, mentioning in their headline that the victory struck a blow for La Liga against the Premier League.

They note in their subheading that: ‘Spain, with Real Madrid, Sevilla and Barca, are the country with most teams left in the Champions League.’

Whether that is the case come the semi-finals will remain to be seen, with the draw for the last eight taking place on Friday.