Argentina’s players unfurled a giant banner in support of Sergio Aguero prior to their 2022 World Cup qualifier with Brazil on Tuesday night.

Barcelona striker Aguero has been advised to take three months out of football due to arrhythmia heart issues, which flared up against Alaves in LaLiga last month.

While Aguero has looked to squash talk he will need to retire, there has been lots of concern for the former Manchester City striker and Lionel Messi and Co wanted to pledge their support ahead of their crunch match with Brazil.

‘We are all with you, Kun,’ read the banner, which came accompanied with a photo of Aguero celebrating scoring for Argentina.

Aguero was taken off 41 minutes into his first Barcelona start last month against Alaves having complained with chest pains.

The 33-year-old has since been ordered to rest for three months and he said he would continue to wait before assessing the situation.

The Argentinian walked off the pitch before spending the next two days in hospital.

Barcelona then announced that Aguero would rest for three months while ‘the effectiveness of treatment is evaluated’.

The incident prompted an outpouring of support at City, Aguero’s former club. 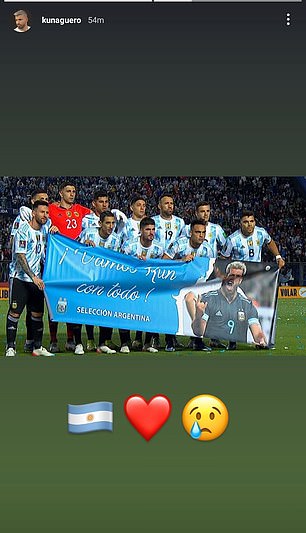 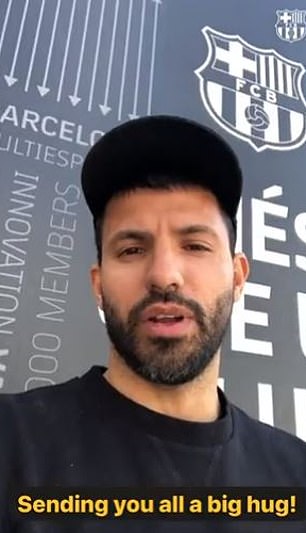 Aguero reacted to the banner on Instagram (left), adding to his video (right) to worried fans last month amid talk that he may not be able to play football again, which he has dismissed 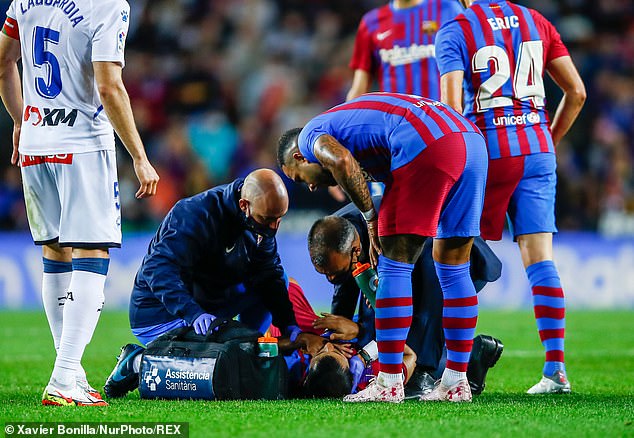 ‘I spoke with his agent. It’s difficult news for him and his family,’ City manager Pep Guardiola said.

‘We wish him well from all our people. Our chairman, we wish him a safe recovery. Health and life more important than anything else.

‘He is in good hands, he takes care of himself, we wish him a safe recovery and come back if he can – otherwise enjoy his life and what he has done. Be careful and be safe for the rest of his life.’

Aguero’s former City team-mate Kyle Walker, who was on the White Hart Lane pitch when Fabrice Muamba’s suffered a cardiac arrest during an FA Cup tie in 2012, added City’s players were in shock at the news.

‘I played with Christian (Eriksen) and it happened at the Euros to him and you think about him and the family,’ said the defender,’ Walker said.

‘I hope Sergio is OK, I spoke to Christian a couple of weeks ago on text message. It is a surprise, we are fit athletes and we train every day. His health is more important that football at the moment. 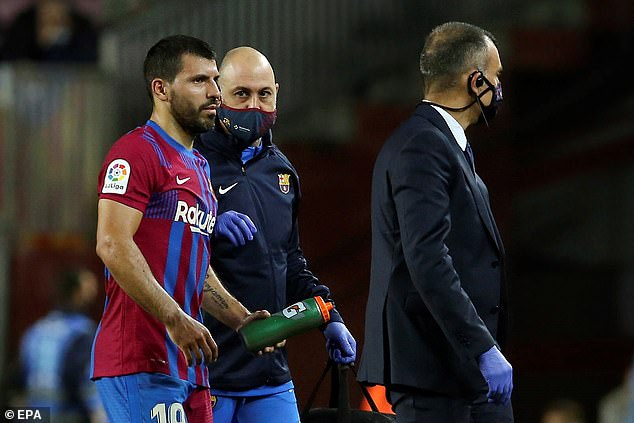 ‘I have seen it happen to a few people I have shared a dressing room with. Take your time, as long as it takes.’

Earlier in November, Aguero released a video thanking the Barcelona supporters for the messages of support he has received.

Aguero said: ‘Hey Culers! Sending you all a big hug!

‘Thank you for all the messages of support. Now it’s time to recover and wait for more news. Sending you all a big hug.’

Aguero had made five appearances in all competitions for Barcelona since arriving in Spain. He scored one goal, in the 2-1 defeat against fierce rivals Real Madrid in LaLiga.