‘When I had the opportunity to play many games against Maradona, it was Maradona’s time. We all admire these types of players, but there are also ways to stop them. There are ways to play against these wonderful players.’

The question is whether the US coach has concocted these methods ahead of facing Messi’s Albiceleste on Tuesday night in a sweltering Houston, Texas. 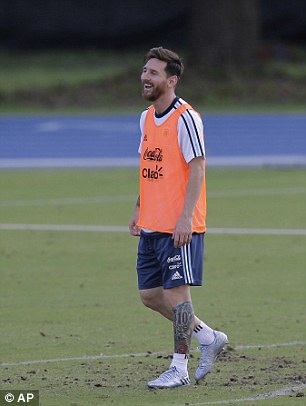 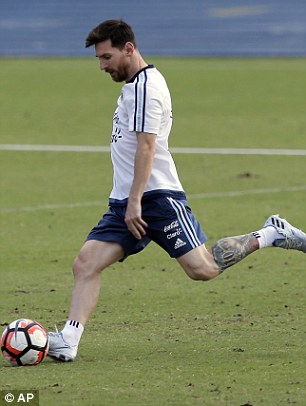 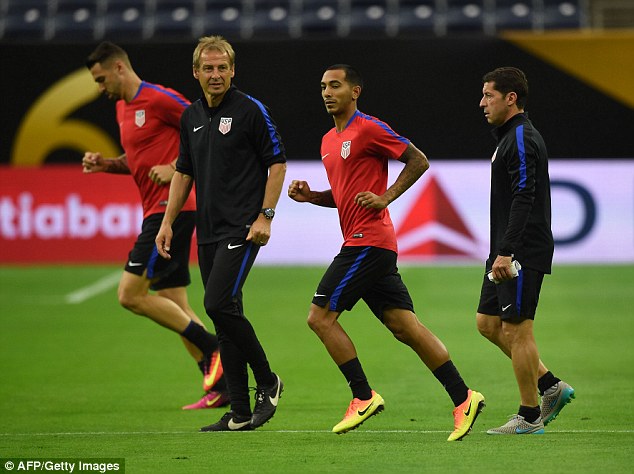 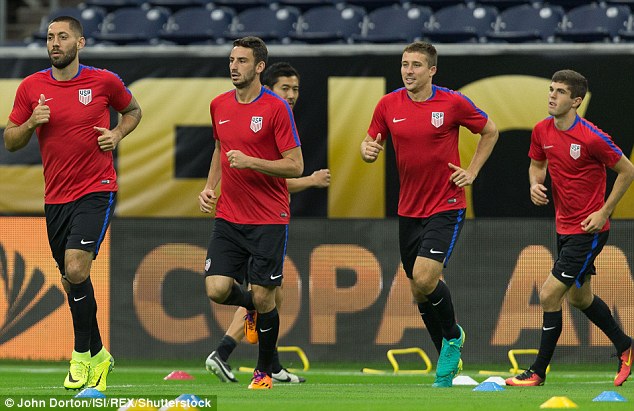 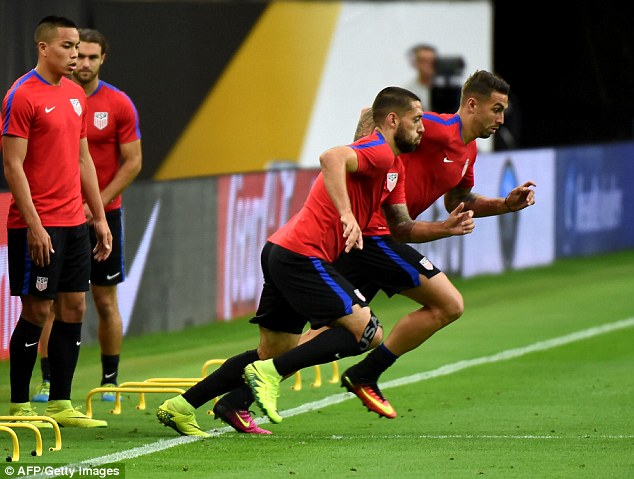 The humid air and high temperatures will be felt as the teams compete, but neither of those is enough to stop the Ballon d’Or holder from working his magic with Argentina, as he bids to end their 23-year major trophy drought.

Messi was just a six-year-old when Argentina last won the Copa America, watching Gabriel Batistuta score twice to help his team beat Mexico 2-1 in the 1993 final.

For his legend to be unassailable he needs to win a tournament with Argentina, even though by now he should be acknowledged as the greatest of all time even though at international level he has not won a trophy. The fact he matched Batistuta’s record of 54 goals against Venezuela shows it.

The Copa America Centenario has almost seemed set up at times for Messi to lift it, with US fans in Santa Clara, Chicago and Seattle all roaring him on with as much as vigour as Argentines themselves.

Klinsmann has called on his team to expose Argentina’s cracks, with Tata Martino’s side far from invincible, despite the quality they possess in attack, with Sergio Aguero, Gonzalo Higuain and Angel di Maria all quality supporting acts.

Di Maria suffered an adductor injury in the second game of the tournament but has recovered sufficiently to be in contention for a place on the bench, even if he is unlikely to feature at any point. 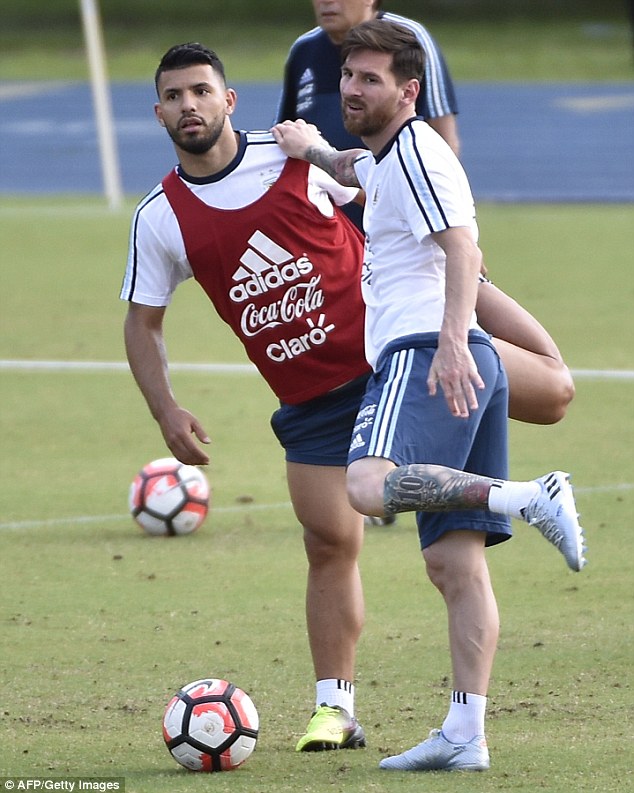 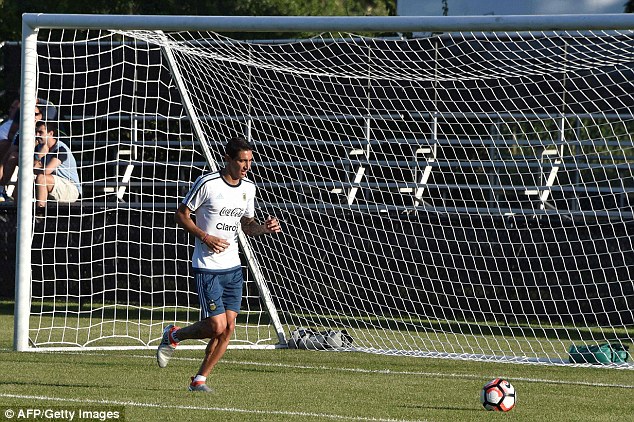 Regardless of the threats to his side, the USA coach says Argentina are beatable, and called on his men to go for the jugular at the right times.

‘If you’re now one bit content [with reaching the semi-finals], you’re going to get that lesson that we just talked about [Mexico being thrashed 7-0 by Chile].

‘What you want to tell the players is there’s no split second to relax here. It’s actually the opposite. You have to step it up even further.

‘At the end of the day it’s two teams playing against each other. I think it’s a lot now down to confidence, confidence in yourself and take it to another level now.’ 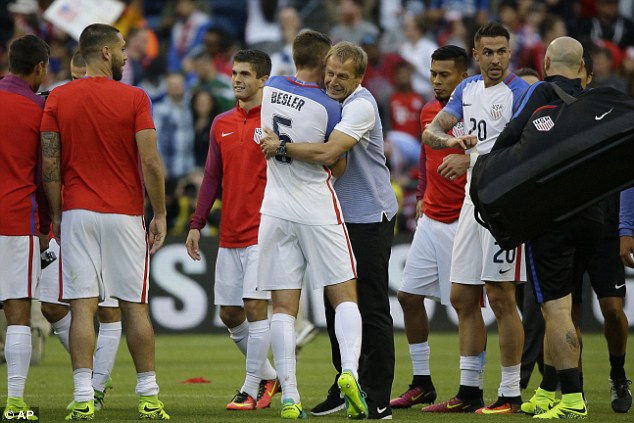 Perhaps most surprisingly, he urged his men to try and damage Argentina, instead of sitting back and playing for penalties after 90 minutes.

‘Let’s go at them, let’s go forward and play our game. We don’t want to just play with 10 guys in our box. That’s not our game,’ he insisted.

‘If you want to get in the final, you have to score sooner or later. We’re not playing for a penalty shootout.

‘We want to take the game to them as well, we want to keep a high line. We want to go eye-to-eye.’

Given Argentina put four past Venezuela in the quarter-finals, along with five in Panama’s net, three against Bolivia and two in the opening day clash with Chile, this is a bold demand from Klinsmann.

‘This is a special moment. This is a once in a lifetime opportunity. You got into the semi-final, you made yourself proud, now go for more,’ he added.

His opposite number, Martino, was calmer ahead of the semi-final, with Argentina trying to reach their third major final in three years.

Having lost against Germany and Chile respectively in 2014 World Cup and 2015 Copa America finals, the Albiceleste are trying to make it third time lucky. 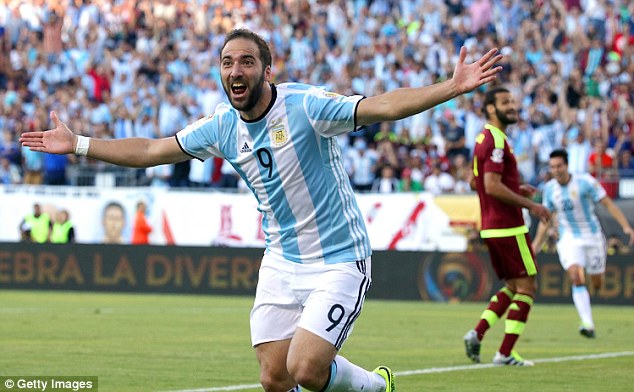 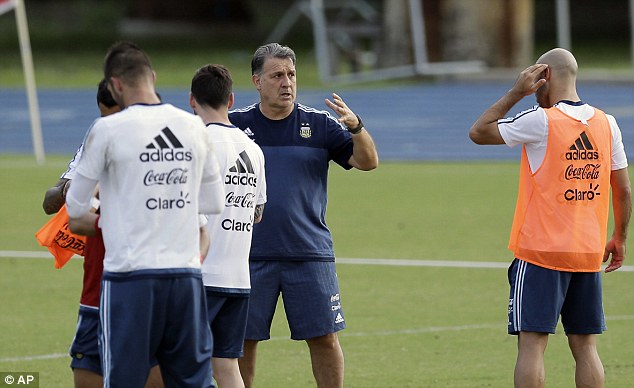 Despite having two days less preparation than USA, Argentina coach Tata Martino is confident they can win

‘The USA’s football has grown a lot in recent years, but of course it is logical that they will try to neutralise the best footballer in the world,’ said Martino, as he pondered what Klinsmann’s team would do to try and stop Messi.

The coach would not complain about the scheduling of these games, with the US having two more days rest than Argentina, after beating Ecuador on Thursday night, while Martino’s side were in action on Saturday.

‘There is no problem,’ he reasoned. ‘We travelled [on Sunday], we chose that day because it was the most convenient. We rested and we train [on Monday] and tomorrow [Tuesday] we will play with no problem.’

Argentina will be helped by USA stars Jermaine Jones, Alejandro Bedoya and Bobby Wood being suspended, while they are missing only Nicolas Gaitan.

Erik Lamela is set to replace the new Atletico Madrid signing on the left for Argentina, while Kyle Beckerman, Graham Zusi and Darlington Nagbe are likely to start the game in place of the banned players.

This clash has been billed as David vs Goliath, which seems a little unfair on the US, although they head into the game with the objective lined out by Klinsmann before the tournament already achieved – reaching the semi-finals.

But as long as they do what the coach asks by not allowing the occasion to get to their heads, or thinking that what they have achieved thus far is enough, then of course they have a chance of stopping Argentina. Yes, even Messi. 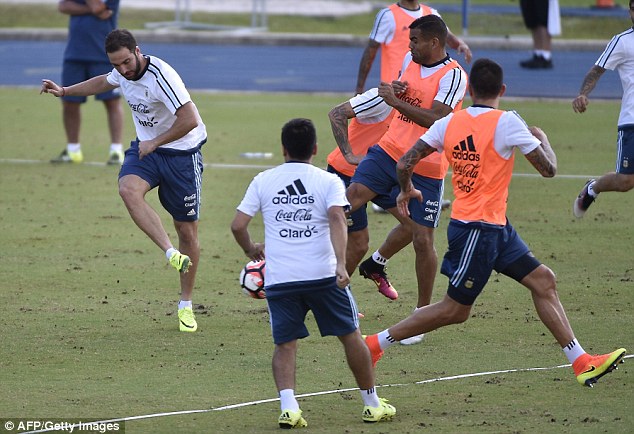 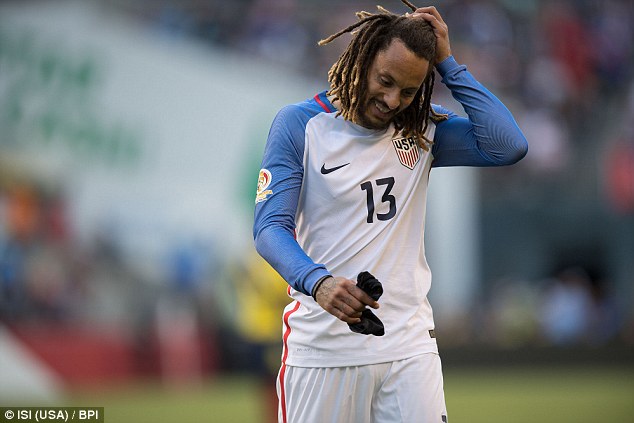