Beaten 2-0 by bitter rivals Brazil in their Copa America semi-final in Belo Horizonte, the 26-year wait for Argentina to lift a major trophy continues and the quest to end that drought is likely to be commanded by someone other than Lionel Scaloni.

This obviously means then that his namesake, one Lionel Messi of Barcelona, has similarly gone 12 years himself now in his unsuccessful bid to taste glory in blue and white.

Tasting defeat for the first time in the 2007 edition of South America’s premier international competition, again to Brazil at the final hurdle in Venezuela, there were also two penalty shootouts against Chile in 2015 and 2016 before adding 2014 extra-time heartache at the hands of the Germans in the World Cup in 2014 to the mix.

In total, Messi has completed nine senior international tournaments for La Albiceleste without lifting silverware at their conclusion – a staggering return from an individual who has clinched the Champions League and Ballon d’Or on no less than four and five occasions respectively.

Though both he and Argentina were at the best they had been all tournament at the Mineirao on Tuesday night, with Messi clipping Alisson’s post in a ferocious start to the second half which almost saw them turn the tides, his stats across five outings in Brazil were hardly flattering. 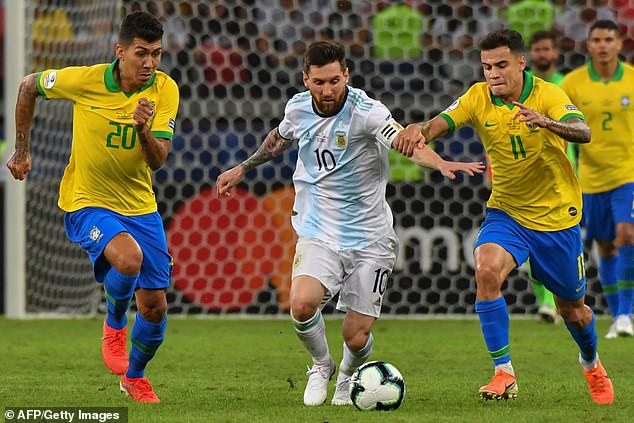 Blaming everything from the quality of the pitches around Latin America’s largest nation, and on Tuesday night both the officiating and Conmebol, Messi didn’t provide either an assist or a goal in open play at the 2019 Copa America with his only solid contribution an equalising penalty against Paraguay in Argentina’s second Group B fixture.

Yet this doesn’t paint the whole picture. In fact, Messi, complimented by Scaloni for his work rate and being the ‘flag bearer’ of their homeland here, completed the most take-ons and most shots, created the most chances and won the most fouls. Was it a case of doing it all for Argentina? Or doing too much?

Naturally, the Argentine press dug its heels in over the hours that followed yet another big stage disappointment. 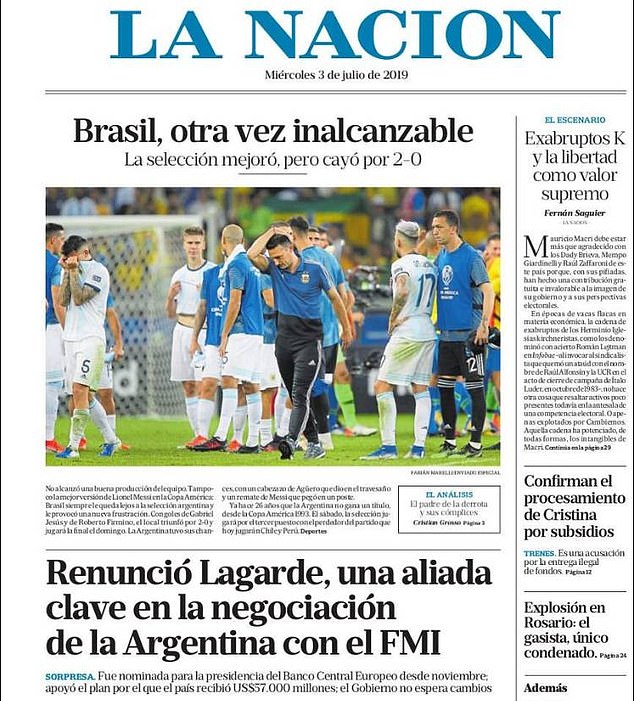 By Ole in their ‘Uno por Uno’ (One by One) rankings, he was given the highest mark of seven among his teammates. ‘The 10 played his best game in the Copa but had no reward. Marked by several [players] and with various systematic faults [in Argentina’s tactics] he managed to complicate [Brazil’s] defence.’ it judged.

Over at La Nacion, Messi also received the same points for being ‘Active, [and a] leader of the offence.’ ‘Brazil tried to corner him and cut the line of passes. He crashed a shot against the post and Alisson saved a magnificent free kick.’ It was added.

Elsewhere, the national newspaper’s Francisco Schiavo added further analysis with a lengthy piece on ‘another disappointment in [Messi’s] obsessive search for a title with the Argentine national team. 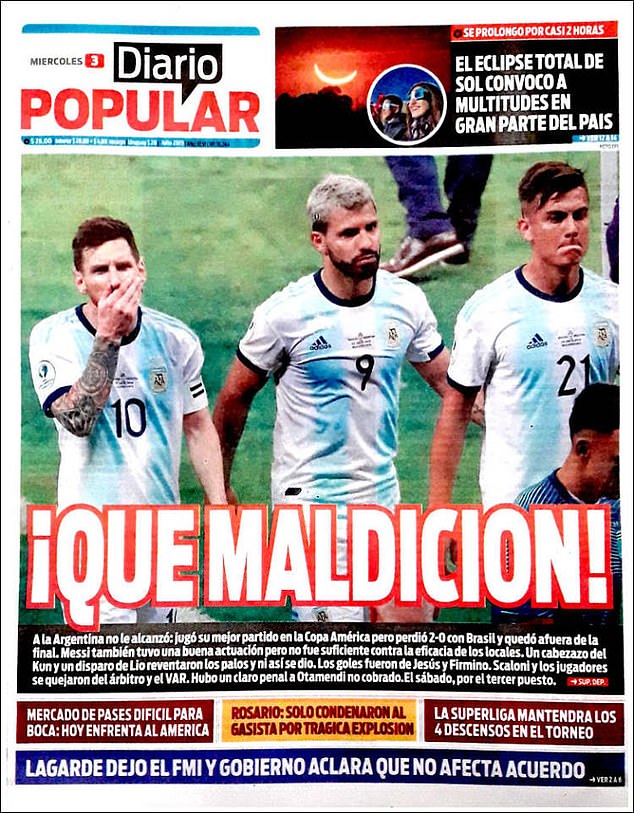 Despite their 2-0 defeat against Brazil, Argentina’s press believe good times are coming back

‘Messi’s task in the Copa, like that of all of Argentina, went from minor to major’ Schiavo wrote. ‘Because the captain played the best match so far in the contest last night. More dynamic and participatory, [he] ignited the attack with those electric runs so characteristic of him.’

Moving on to Messi’s ‘long course [for glory] in the Copa America’, Schiavo noted that ‘generational differences came to the surface’ after he was bled in for Argentina in the late 2000s. At the turn of the decade, the likes of his idol Juan Roman Riquelme, Juan Sebastian Veron, Esteban Cambiasso, Fernando Gago, Javier Zanetti, Roberto Ayala and Gabriel Heinze all hung up their boots or were deemed surplus to requirements.

That Messi, save for his ‘old cronies’ Sergio Aguero and Angel Di Maria, as Schiavo called them, has had to carry on surrounded by less talented colleagues that have failed to fill the void has not gone unnoticed.

Still, in the Mixed Zone at the Mineirao, when not in conspiracy mode, the quiet genius offered to carry on and seemed enthused at the current crop of young stars already in the team and coming through, who may pave his path to glory at long last. 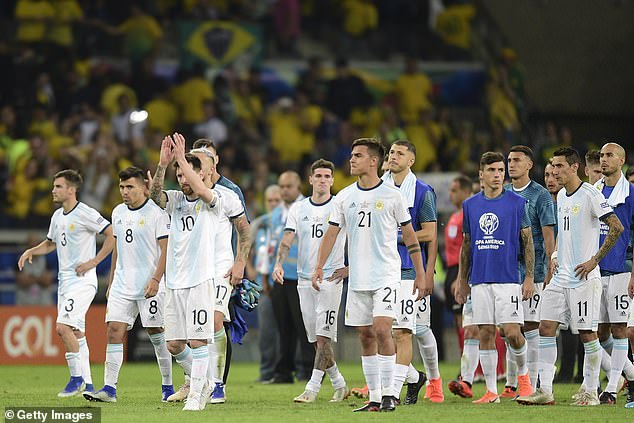 ‘Something new is on the horizon’ Messi insisted. ‘The truth is I have got on very well with this group of players and if I have to help in some way I will. This is a great group which is growing and if I can join them I will,’ he expanded.

Likewise, those back home wish that he will stick around too. ‘Continue, master. Good times are coming’ begged Nelson Manulak on TyC Sport’s social media page.

‘I want to keep watching your magic’ confessed Ariel Fernando Lopez. ‘There are people who speak bad about you because in life they were losers.’

From Arnaldo Ariel Yapura, it was implied that Messi should stick around not just for next year’s joint-hosted Copa America, but perhaps also Qatar 2022, by which he will be 35 yet could inspire those under him. 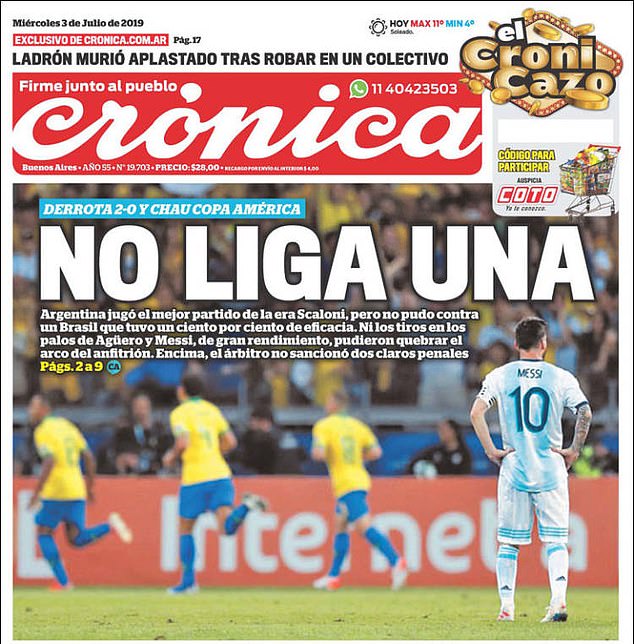 Some of the press even feel Messi, 32, can still help lead new generation of players to glory