Lions and a rare tiger poisoned by poachers in South Africa

Distraught Justin Fernandes, owner of Jugomaro Predator Park in South Africa, has posted heartbreaking video that shows three of his lions and a rare golden tabby tiger after they were poisoned.

Fernandes was alerted to their distressing deaths when his wolf suddenly began howling at his park in Limpopo, and he broke down in tears when he went outside to investigate.

Justin Fernandes, owner of Jugomaro Predator Park in South Africa, found the four big cats early in the morning. All had suffered painful deaths after being poisoned by poachers 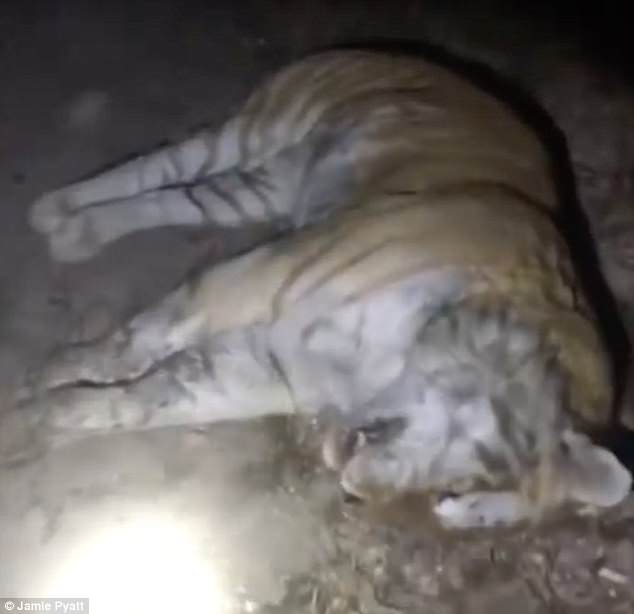 His white lion, Elvis, was slowly dying in agony, while lying nearby was the corpse of his extremely rare golden tabby tiger called Kai (above) 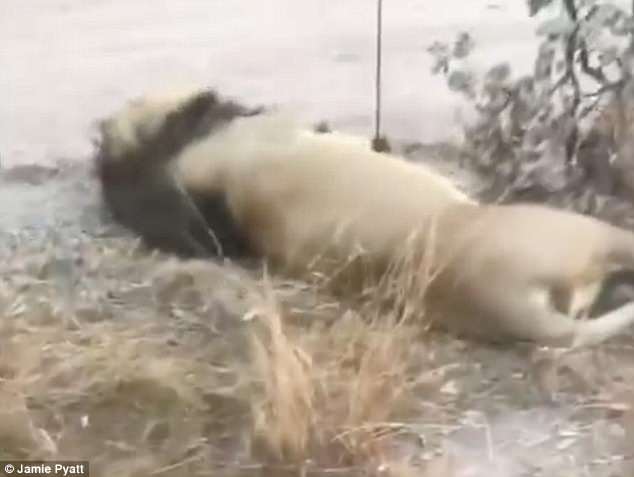 With his voice breaking, he said: ‘Our lions have been poisoned. Elvis and Kai already dead. Elvie I love you my boy. Oh my God, no no no no’

He and his family were so desperate to try and save the beasts’ lives that they even attempted CPR and gave mouth-to-mouth while awaiting a vet, to no avail.

The 32-year-old, who rescues big cats and looks after them for life, came across the horrific scene yesterday after intruders fed his magnificent beasts deadly poison.

His white lion, Elvis, was slowly dying in agony, while lying nearby was the corpse of his extremely rare golden tabby tiger called Kai, of which there are only 30 left in the world.

As he checked out his other lions by torchlight at 2am he found that two more of his tabby lions Hercules and Taariq had also been poisoned and were in their final moments.

The four big cats had been killed by poachers who planned to cut off their heads and claws to sell them to witch doctors who make black magic potions from the animals.

Fernandes had disturbed them before they could butcher his big cats, but as the video shows, he was clearly devastated as he weeps over the predators he has lost. 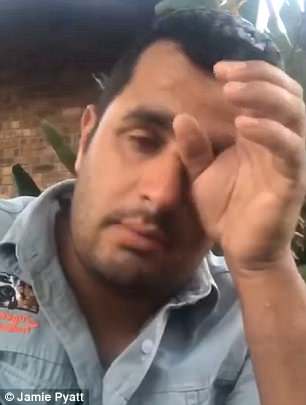 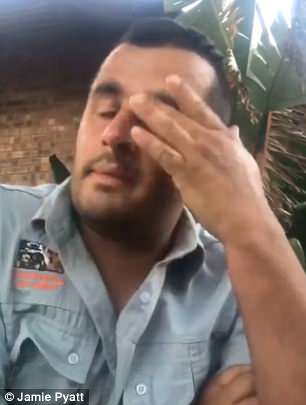 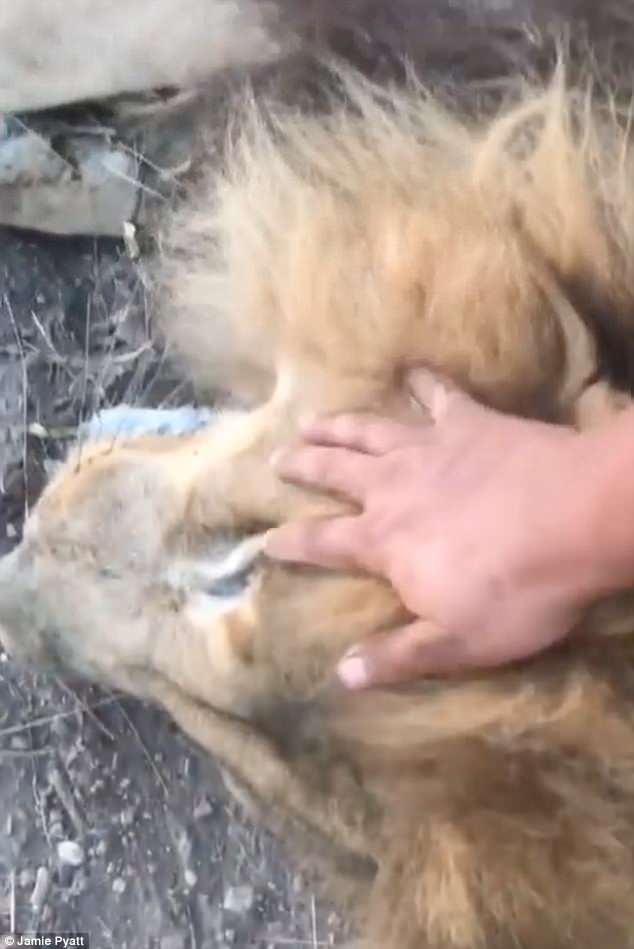 The family attempted CPR and even mouth-to-mouth in a desperate attempt to save their poisoned animals, to no avail

With his voice breaking, he said: ‘Our lions have been poisoned. Elvis and Kai already dead. Elvie I love you my boy. Oh my God, no no no no.

‘I can’t believe this. Here is Kai. I don’t know what the flip I am going to do. He has been dead half an hour. Oh my God guys please pray nothing happens to the rest.’

As he moves further round the enclosure he comes across two of his tawny lions who are foaming at the mouth and stumbling and Justin knows they, too, have been poisoned.

His tears flow and he sobs loudly knowing nothing can be done to save the Kings of the Jungle who had been fed a poison so deadly a teaspoon of it can kill a rhinoceros.

He calls Hercules over to him knowing his lion is doomed and trying to retch up the poison and says gently to him: ‘Come throw it up old boy, come throw it out old boy.’

But it was no good, as both Hercules and Taariq died before the vet could reach them to help.

Fernandes says on video: ‘It has been the worst nightmare of my life. I heard the wolf howling and came in and found Elvis biting the gate so hard that he actually bent the gate.

‘He was dying and I got the keys and went in. I looked for Kai but he was already dead. I just sat with Elvis waiting for him to die as he was still breathing and moaning.’

On the park’s Facebook page, it says: ‘Our beautiful boys, Kai, Elvis, Hercules and Taariq suffered a very painful death. Justin gave Elvis mouth-to-mouth; I tried CPR, we tried so hard to save them… my cats were murdered for nothing!! Thankfully they were not mutilated as we disturbed the a*******. RIP my babies… till we meet again.’

The family only set up this predator park two weeks ago after being forced off their last park after going bust, and had to buy their big cats back from the liquidators.

Fernandes said: ‘We have devoted ourselves to looking after and rescuing big cats mainly from people who buy them as pets and then realise within a couple of years they are killers.

‘They come as loveable cubs but in no time they become an apex predator and then people don’t want them so we give them a home to live in safely for their whole life.

‘My family has been through so much over the years trying to survive financially to care for these big cats and now we have this not many people could survive all of this. 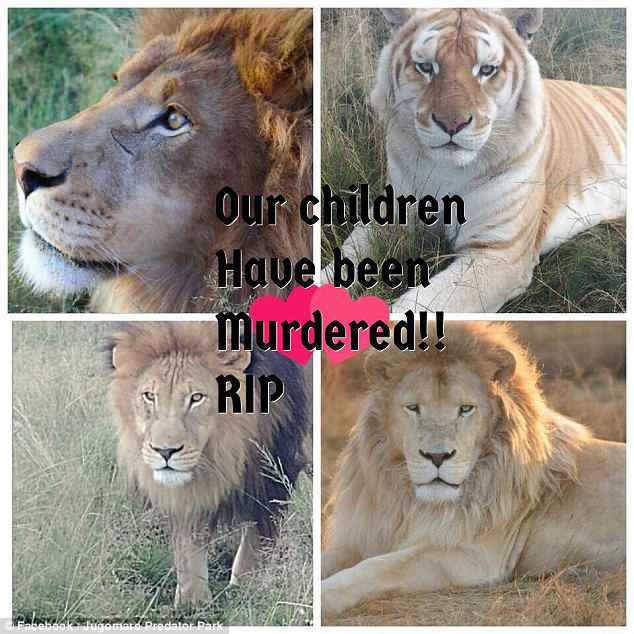 ‘These people who did this killed the tiger to get to the lions because they want to take the teeth and claws as in black magic they are seen as the power point of the animal.

‘The witch doctors turn them into potions which buyers believe makes them strong. If there is one blessing it is that at least I got to them before they could be butchered.’

The three lions were aged seven and the golden tabby tiger was younger but Justin said this species of tiger was so rare that there were only about 30 now left worldwide.

Another predator park owner Gert Classens, 48, had three of his lions butchered last month, just 20 miles away, and three others stolen to be butchered later by poachers.

Fernandes posted his emotional video on his personal Facebook page.

He had bottle-fed all four predators since birth, and said that they had been fed liver poisoned with Temik which is known a Two-Step as after two steps you can die.

It is more poisonous that arsenic and a teaspoon can kill a rhino.

The family have invited people to attend a funeral for the four big cats tomorrow.

Lieutenant-Colonel Moatshe Ngoepe said officers had found meat at the scene which may have been laced with a poisonous substance, but no arrests have yet been made.

He said: ‘The police investigations, including the forensic ones, will determine the exact cause of death to these animals. The suspects in this matter are unknown as yet.’