Four lions who were born into freezing captivity in a circus in Ukraine have been rescued and taken to Africa after spending three days travelling nearly 8,000 miles by car and plane – where they even enjoyed an adorable snooze together.

After the 76-hour journey from crate to enclosure, the big cats arrived in South Africa, where they took their first steps of freedom today.

Lioness twins Charlie and Kai, four, and their younger sister Luca, three, have only ever known bars and cages since being born into the circus.

Nathan, then a tiny lion cub, joined them just over a year ago and also faced a life of captivity and performing for the amusement of humans.

But in a heartwarming twist, the lions were rescued by an animal activist, South African expat Lionel De Lange, 53, from the Lawrence Anthony Earth Organization Ukraine (LAEO).

Lioness twins Charlie and Kai, four, and their younger sister Luca, three, have only ever known bars and cages since being born into the circus (pictured together). Nathan, then a tiny lion cub, joined them just over a year ago 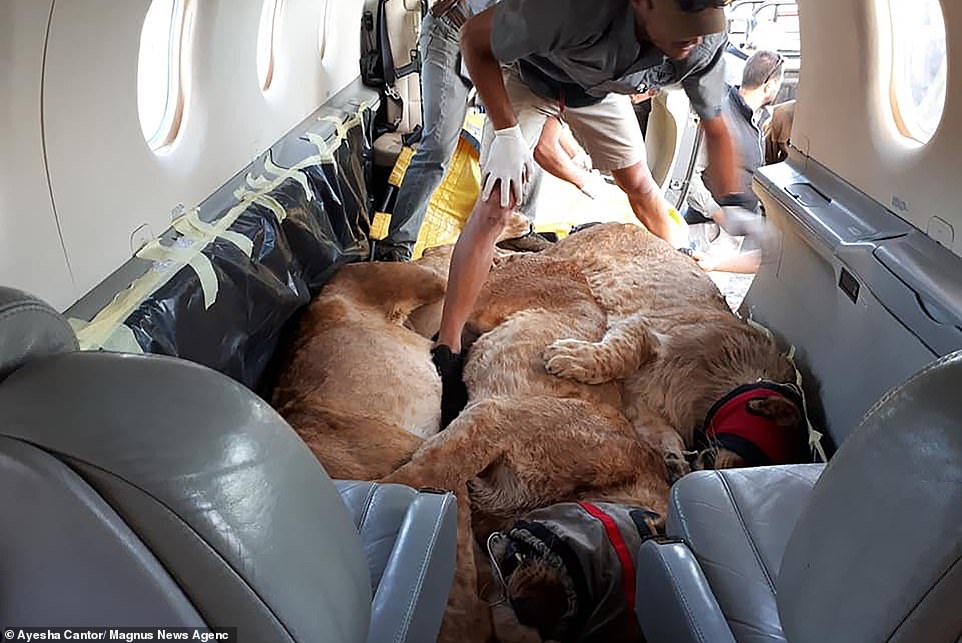 The four lions have now been rescued from captivity and taken nearly 8,000 miles by car and plane to their new home, a nature reserve in South Africa

Mr De Lange, who now lives in Ukraine, has made a career of rescuing animals in eastern Europe, and has already rescued some bears since arriving arriving in the country and meeting his wife Anya.

Animal relocation specialists Intradco Global, along with Turkish Airlines, helped the lions make the 10-hour flight from Istanbul to Johannesburg on Tuesday.

And today the animals took their first steps on African soil at the Kragga Kamma Game Reserve.

Video and pictures show lioness Kai enjoying the enclosure before being joined by the others.

At Kragga Kamma the lions now have 14,000 square metres of lush African bush, a huge contrast from the 40 square metre cage they used to call home.

Speaking today, Mr De Lange, who traveled down with his wife Anya and Ukrainian vet Mikhail, said the four lions took their first ever steps on Africa soil after having a breakfast of impala served up for them. 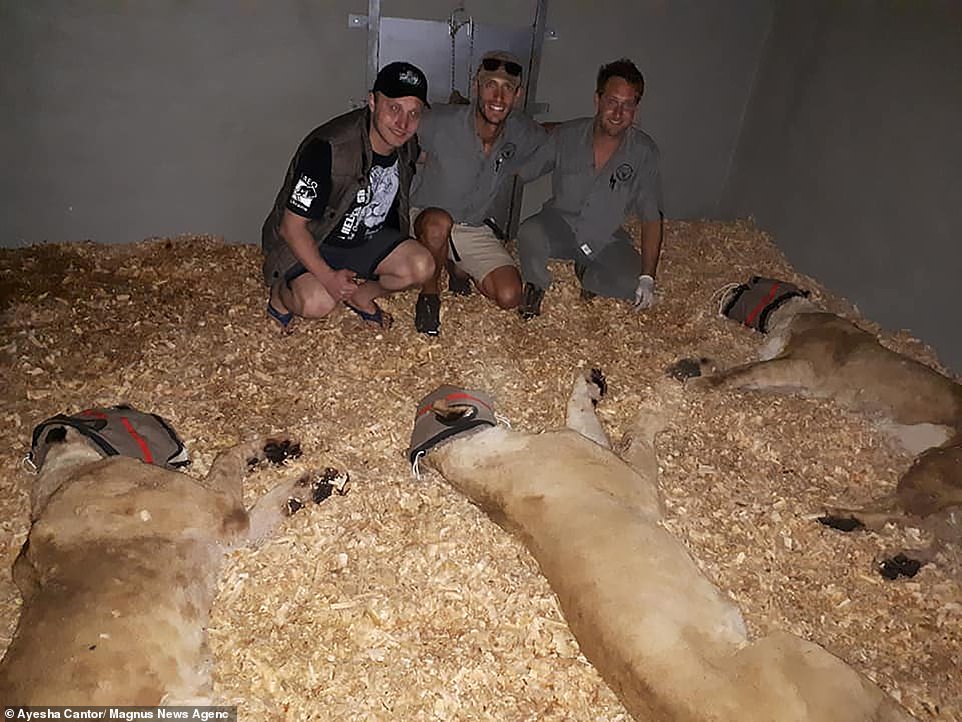 The lions were all sedated as they were flown to South Africa. Pictured are the vets who travelled with the lions to the Kragga Kamma Game Reserve 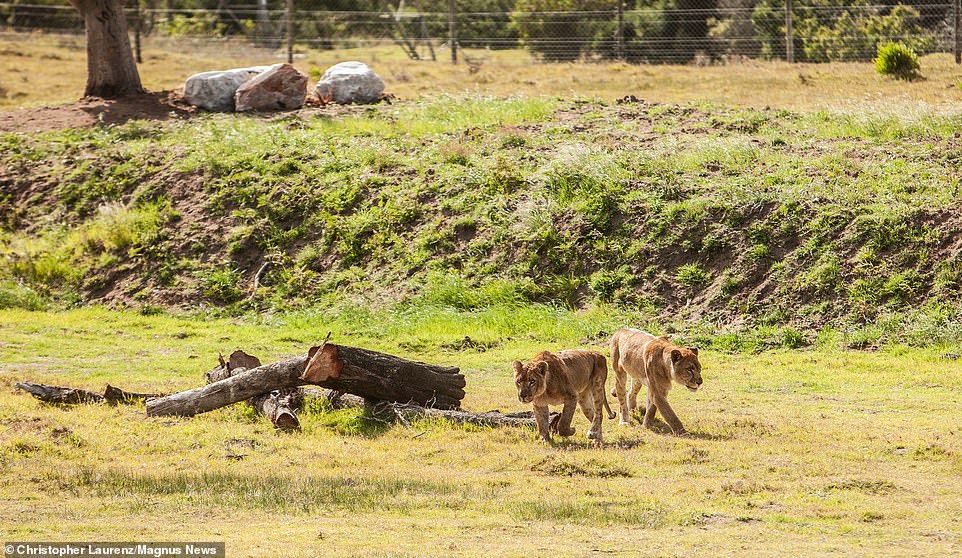 Here, you can see two of the three lioness taking their first steps in Africa today at Kragga Kamma Game Reserve after travelling 76 hours from Ukraine 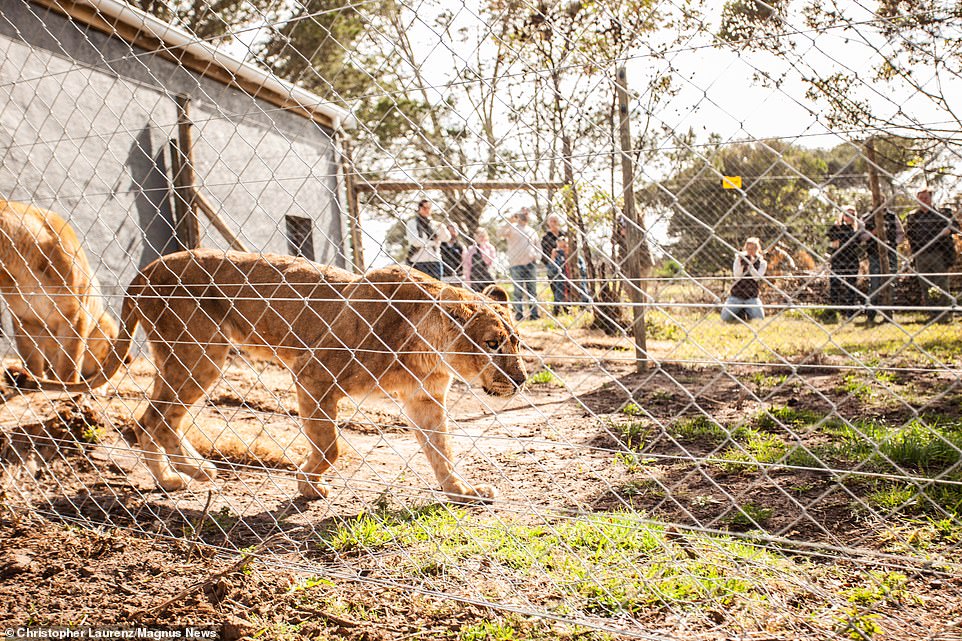 Lioness Kai, pictured, was the first big cat to walk on African soil after their arduous journey, with excited locals watching the animals stretch their legs

He said: ‘It was at 8.45am this morning, under an African sky and after a breakfast of impala. It was unbelievable, I almost can’t put it into words.

‘It was a hard trip but the vet checked them over and once the anaesthetic wore off they were ready, after travelling for more than 76 hours from crate to enclosure.

Mr De Lange said that excitement about the lion arriving had spread across the local area.

He said: ‘On the flight down from Johannesburg we even had air traffic control calling us asking where we were because so many people were waiting for us.

‘It was incredible from the plane we could see all the people waiting for us.

‘In the end we landed on a beautiful air strip by the sea and we put the lions into utes and got them to the park.’ 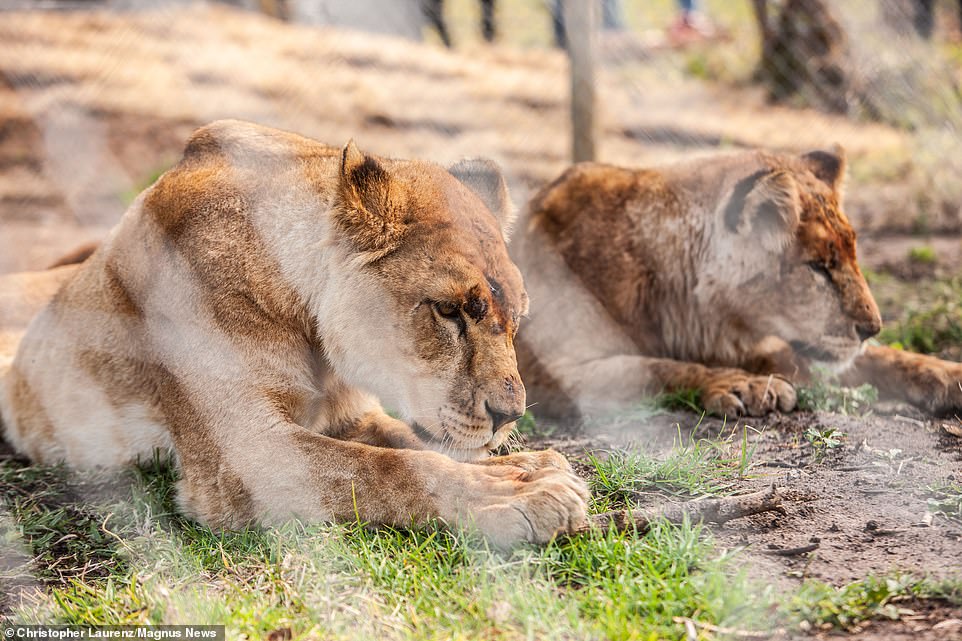 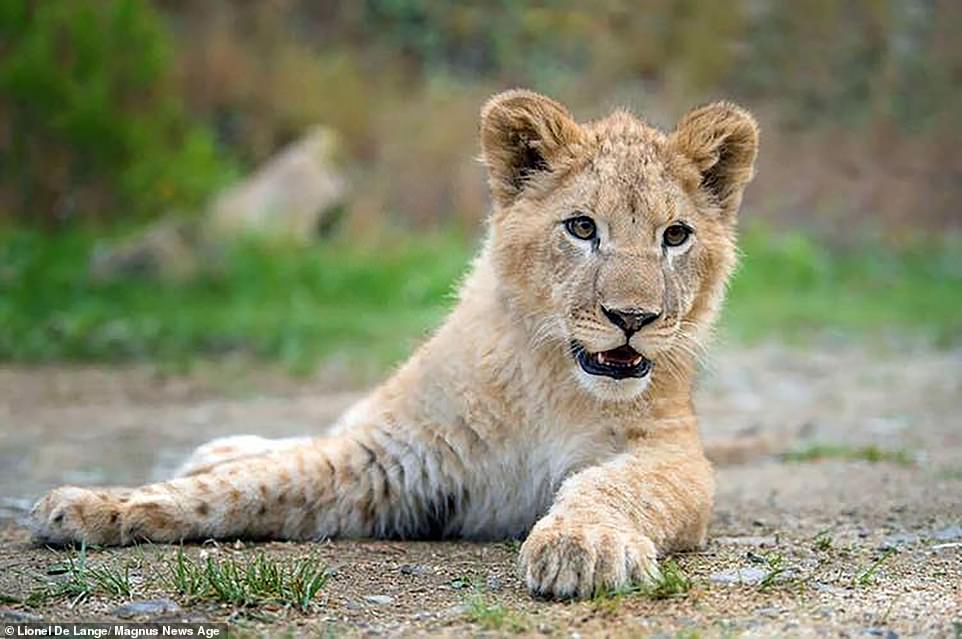 Nathan, pictured as a cub, was rescued alongside the other three lionesses. He formed a bond with transport worker Paul Ketchell, 51, who helped Mr De Lange

Mr De Lange and his wife Anya pictured standing with the crates the lions were transported in. Mr De Lange is already planning to launch another rescue of bears and lions in Ukraine

Mr De Lange thanked the ‘amazing generosity’ and donations from individuals, sponsors and companies around the world.

He said: ‘As everyone says here, it takes a village, and everyone just banded together. Just the flights six months ago was at £27,000 and I think we negotiated that and got that down.

‘All over the world people have banded together to give big donations, small donations, everyone has worked together.

‘I’ve got one lady in the US who gives two dollars a month for the last three years, I say thank you to everyone for their donations, but I write that lady a little message every time, because it’s those two dollars that help make up the big money.’

Despite his mammoth journey rescuing the lions, Mr De Lange is already planning to launch another rescue of bears and lions in Ukraine. 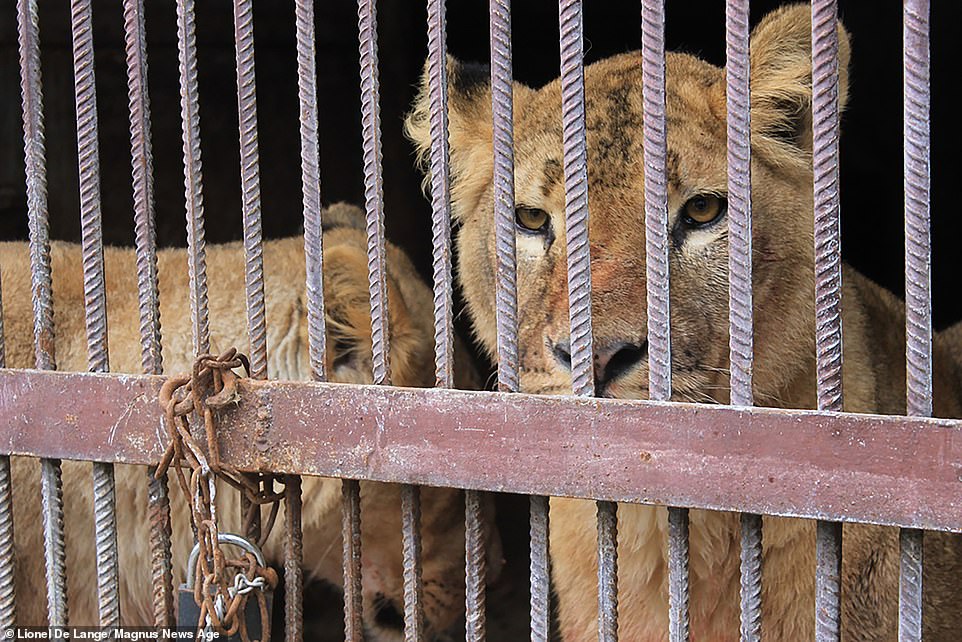 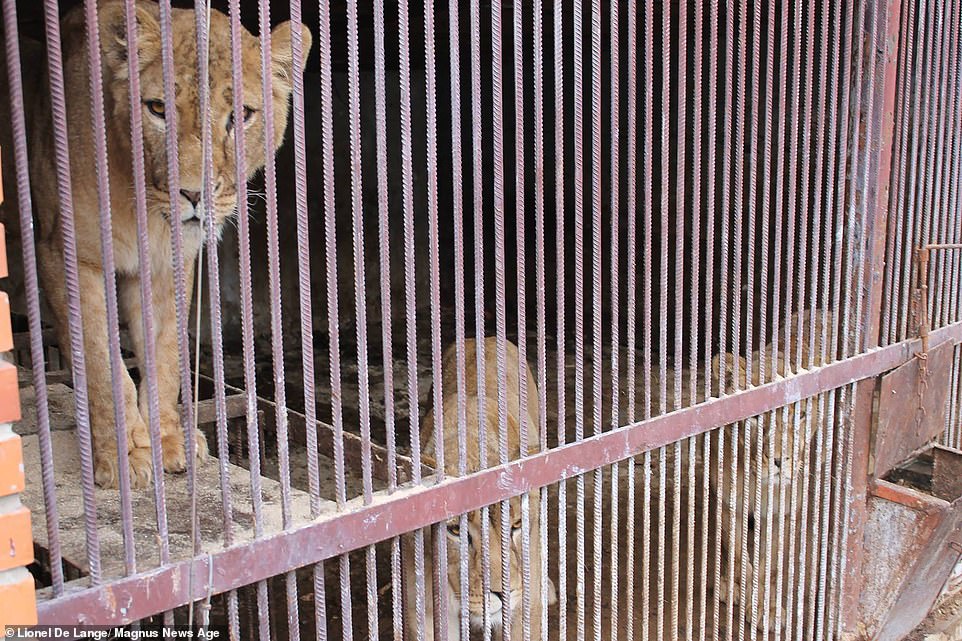 Nathan the cub hasn’t been introduced to the lionesses yet and Mr De Lange said: ‘We hope that Nathan and three girls will bond, otherwise we will have to fight to find a mate for Nathan’

He said: ‘For now the future for these for lions is to be what they were born to be, just lions, lie around in the sun, get fed and just relax… and not have to live in their own urine and faeces.

‘They’ve got a monster enclosure here, 14,000 m2, so 1.4 hectares, it’s probably one of the biggest and nicest enclosures that I’ve seen for the number of lions that are in it.

‘We hope that Nathan and three girls will bond, otherwise we will have to fight to find a mate for Nathan because he needs somebody, he just wants company.’

The couple have invested R250,000 (around £14,000) building the new enclosure for the lions which has been dug into the earth to allow the public to view and learn about the big cats. 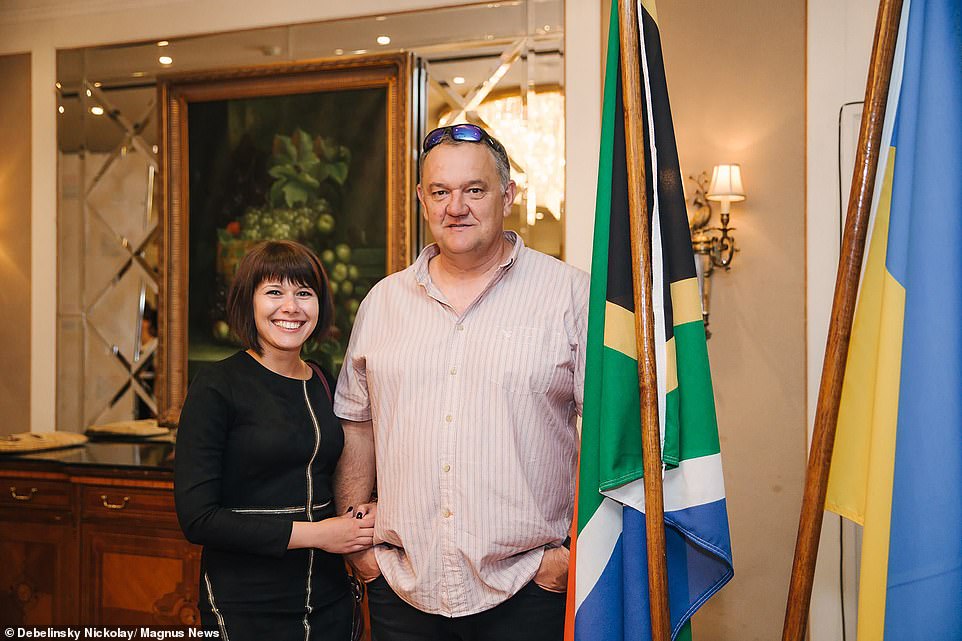 Mr De Lange, who now lives in Ukraine, has made a career of rescuing animals in eastern Europe, and has already rescued some bears since arriving arriving in the country and meeting his wife Anya 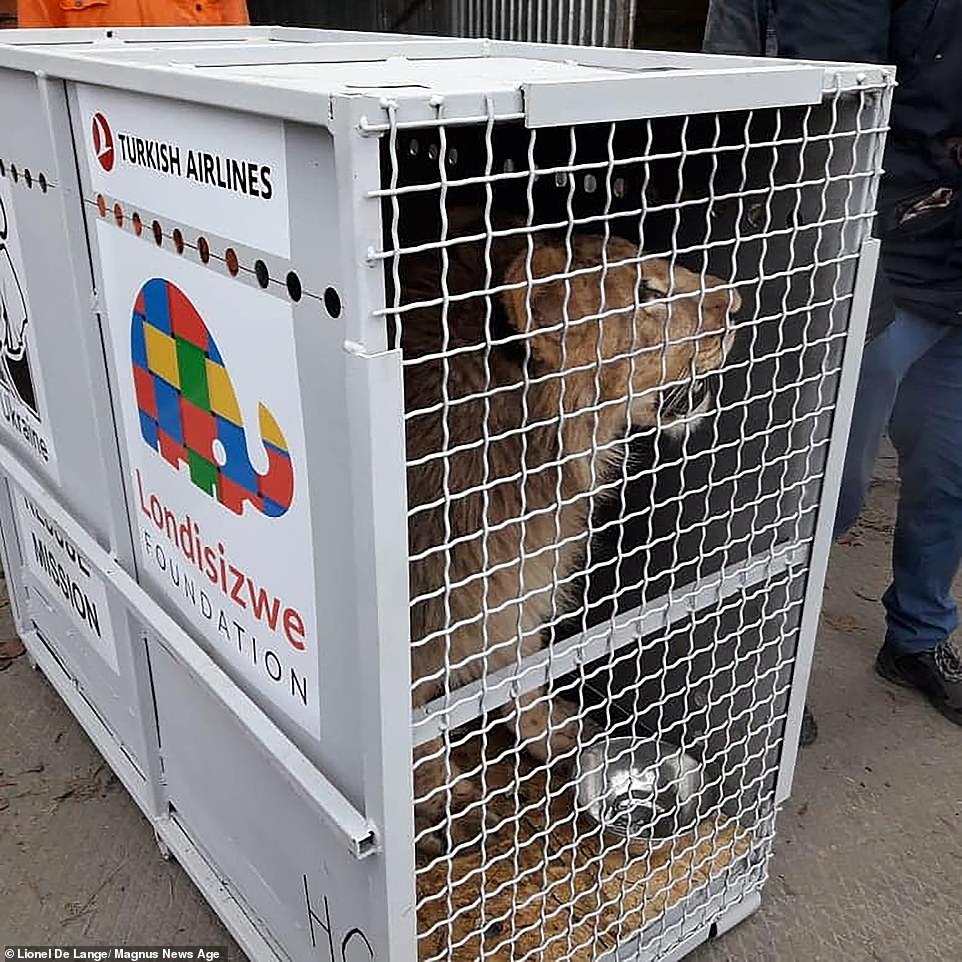 Mr De Lange says Nathan (pictured), who has now grown from being a tiny lion cub, ‘needs somebody, he just wants company’

Mrs Cantor said: ‘It was not something that we initially saw ourselves doing, all our other wildlife is free roaming and when Lionel first contacted us we said we didn’t want to have captive animals.

‘But Lionel is quite persuasive and once he’d filled us in on the stories of these lions it was easy for us to say let’s do this and brings these cats home and give them a good life.

‘My husband has done an amazing job of building the enclosure in such a way that he’s actually dug the earth away in places so the fences are below human eye level.

‘So people have a great view of seeing the lions without fences between them.

‘The lions have rocks and trees so they can be up high, when they eventually get to that point and properly start exploring. So it’s a great facility for the lions and it makes for awesome viewing for the public.’

She added that the reserve worked a lot with schools with some travelling for five hours to see animals they would never have seen before.

She said: ‘These children are the generation that are really going to turn things around for our planets wildlife so it’s important to get these kids in and make them wildlife ambassadors for life.’ 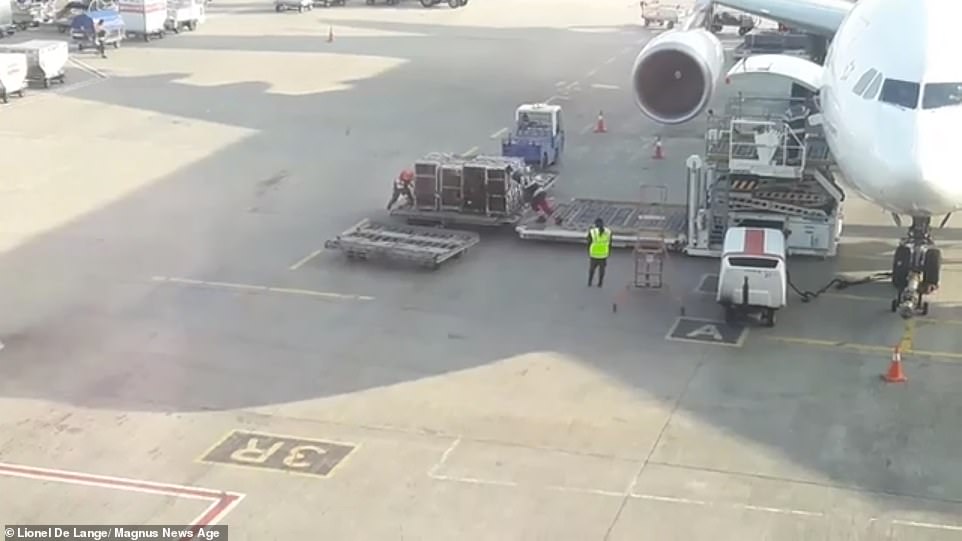 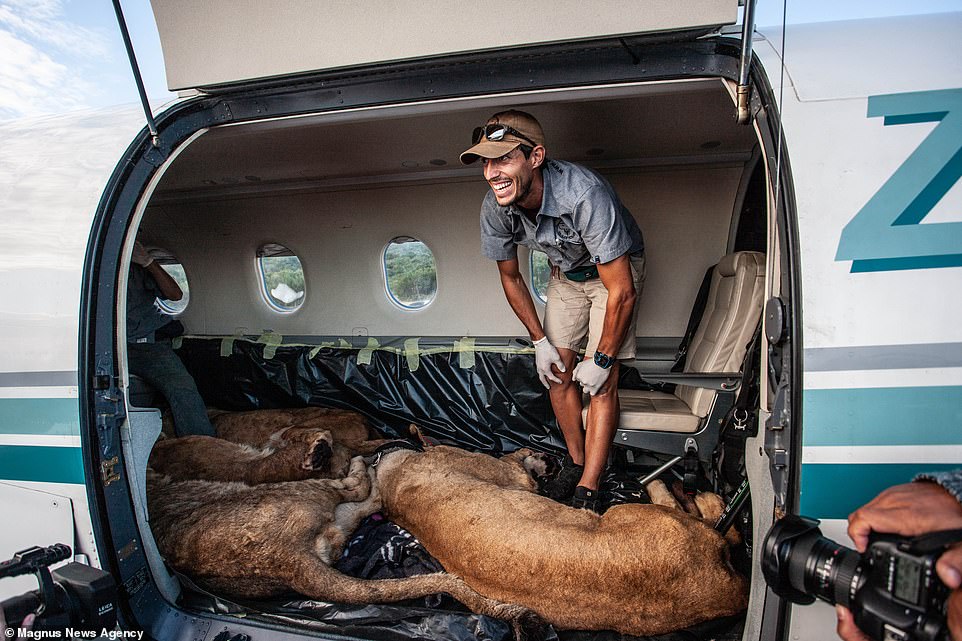 Dane Riecker, from animal transport experts Intradco Global said it was an honour for the firm to help transport the four lions nearly 8,000 miles from Ukraine to their new home in South Africa Dane Riecker, from animal transport experts Intradco Global said it was an honour for the firm to help transport the four lions nearly 8,000 miles from Ukraine to their new home in South Africa.

He said: ‘We love having the opportunity to help our various relocation clients, such as Lawrence Anthony Earth Organization for this movement.

‘The reality is that there are animals suffering all over the world, but there are champions out there dedicating themselves to giving these animals a better future.

‘For this specific project we were able to fit them into a lower deck position which allowed us to use a passenger flight with Turkish Airlines, who had the shortest possible connection from Kiev to Johannesburg.

‘Istanbul has an animal station that allowed the lions to be fed and watered during the transit period, which really made this route viable.

‘Combined with access to the travelling animal attendants it was a real VIP service for these special passengers.

‘For obvious reasons, lions are among some of the more tricky animals to transport. Like all animals, they all have their specific conditional and environmental conditions that they feel comfortable in. 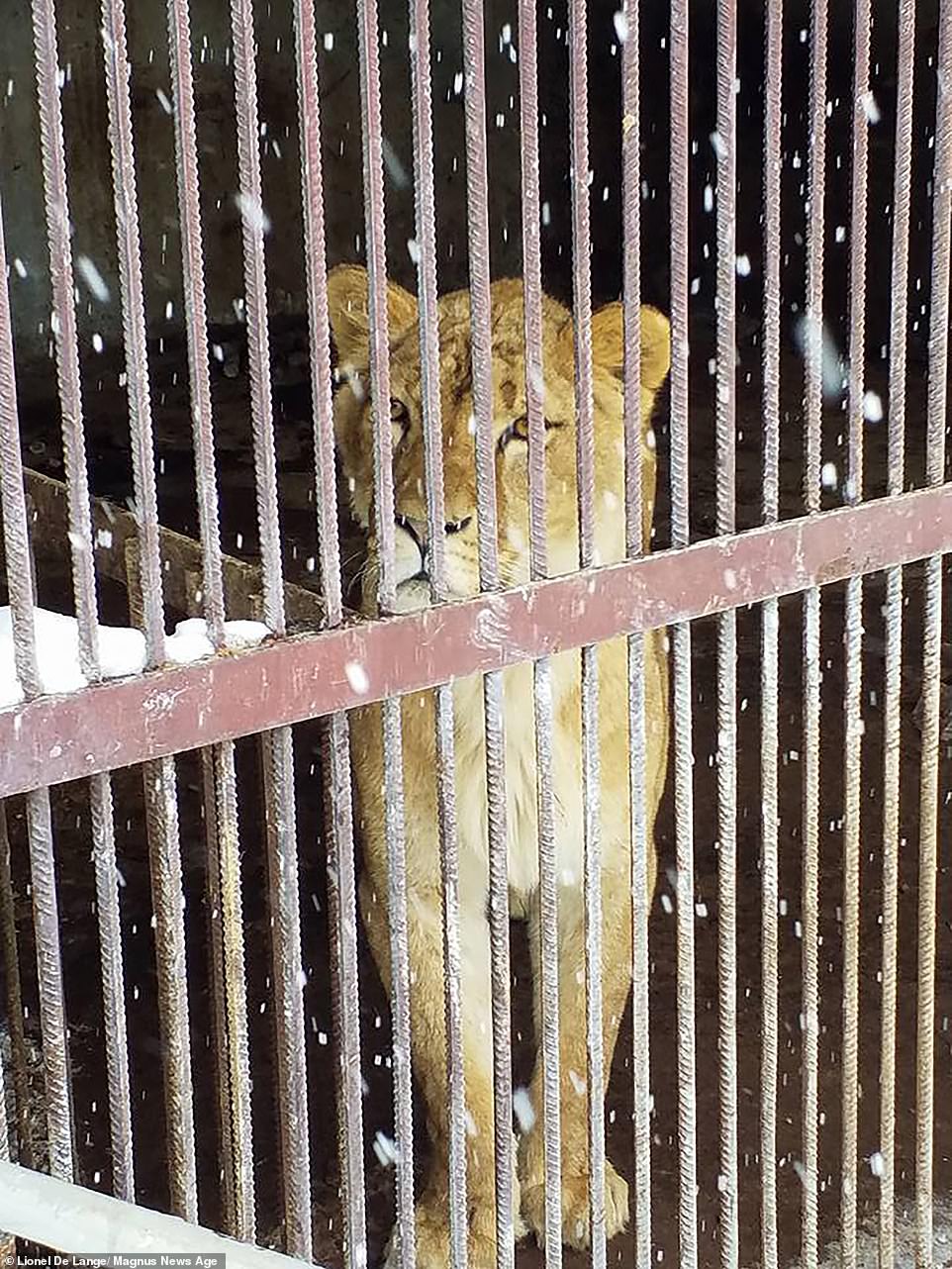 At Kragga Kamma the lions now have 14,000 square metres of lush African bush, a huge contrast from the 40 square metre cage they used to call home

‘Our job is to ensure they travel with the minimal level of stress, and arrive in healthy condition. That being said, there is no project that isn’t possible with the right level of planning prior to each flight, and then a well experienced team professional vets and animal attendants to ensure the plans manifest correctly on the day.’

Transport worker Paul Ketchell, 51, originally from Brisbane, Australia, met Mr De Lange and the lions in Ukraine around a year ago and decided to help out by making the lion transport crates and larger metal enclosures with his welding skills.

Mr Ketchell, who is married to a Ukrainian woman and has two step-children there, said he remembers the day he first met Nathan as a cub.

He said: ‘I met Nathan the first time I went up with Lionel and it’s kind of funny I just fell in love with him.

‘He was rather stressed as animals get when they are shifted and I tried to spend every moment I could with him, I’d just go an talk to him and he’d settle down. I really just connected with him.

‘From then on whenever he got stressed, I’d sit and talk to him with my face up close to the bars and he’d put his nose up to them and then just lay down and relax.

‘Lionel said ”you and Nathan just know each other”.

‘Animals don’t have a voice but people like Lionel give them one. I think Nathan is going to love his new home.’