Lipstick, mixed dancing at first Raqa wedding since IS

At a house in Syria’s Raqqa, women and men danced together in celebration at a wedding that would have been unimaginable just months ago, when the Islamic State group ruled the city.

Ahmad and Heba’s wedding, held Friday in Raqqa’s western neighbourhood of Jazra, was the first in the city since US-backed forces seized it on October 17.

Out on the patio, a man in a dark robe and a thick puffer vest spun his prayer beads to the beat as he led a line of men and women in the dabke, a Levantine dance performed at celebrations.

The dancers hopped and swayed to-and-fro as children ran around. Elders looked on approvingly from seats and benches on the edge of the makeshift dance floor.

Syrian women escort bride Heba on her way to wedding Ahmad in Raqqa, the first ceremony to take place since the city was liberated from the Islamic State 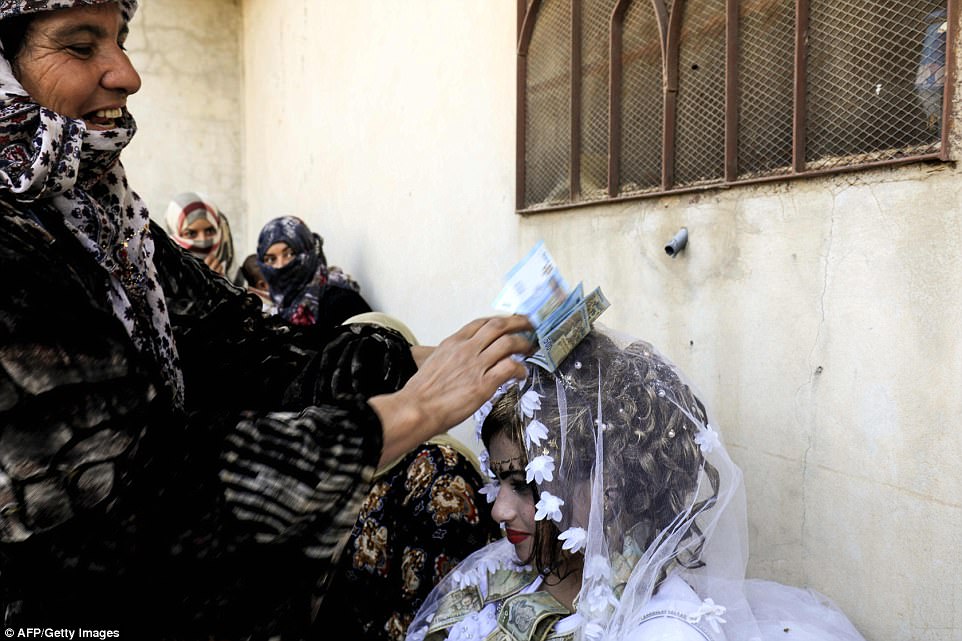 The bride is given a traditional showering of money ahead of the wedding in the western suburb of Jazra, in the city of Raqqa. Such a ceremony would have been unthinkable just a few weeks ago 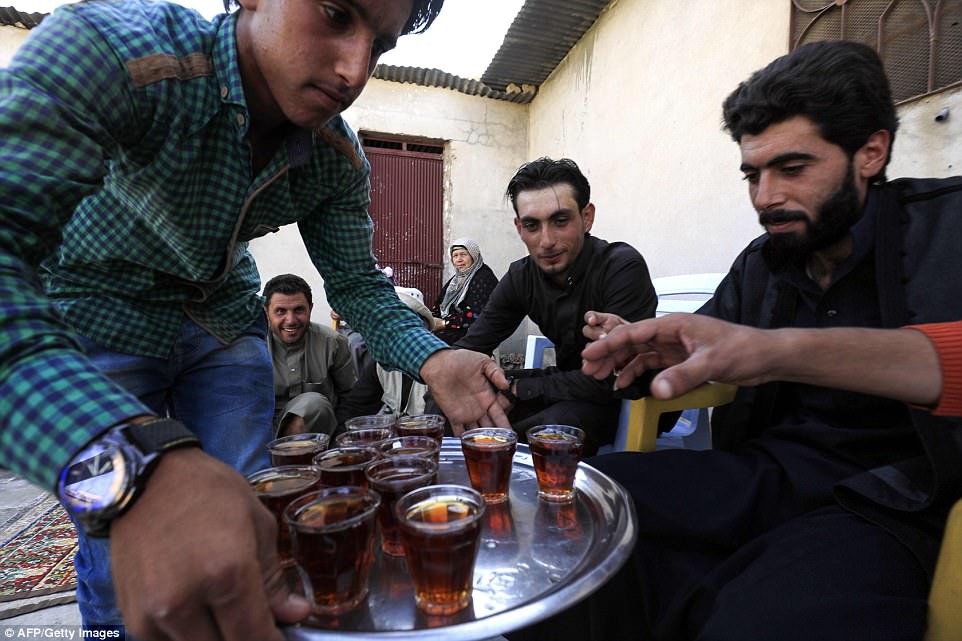 The 18-year-old groom Ahmed (centre) is served tea ahead of tying the knot with bride-to-be Heba. His family were lucky in being able to return to their old neighbourhood 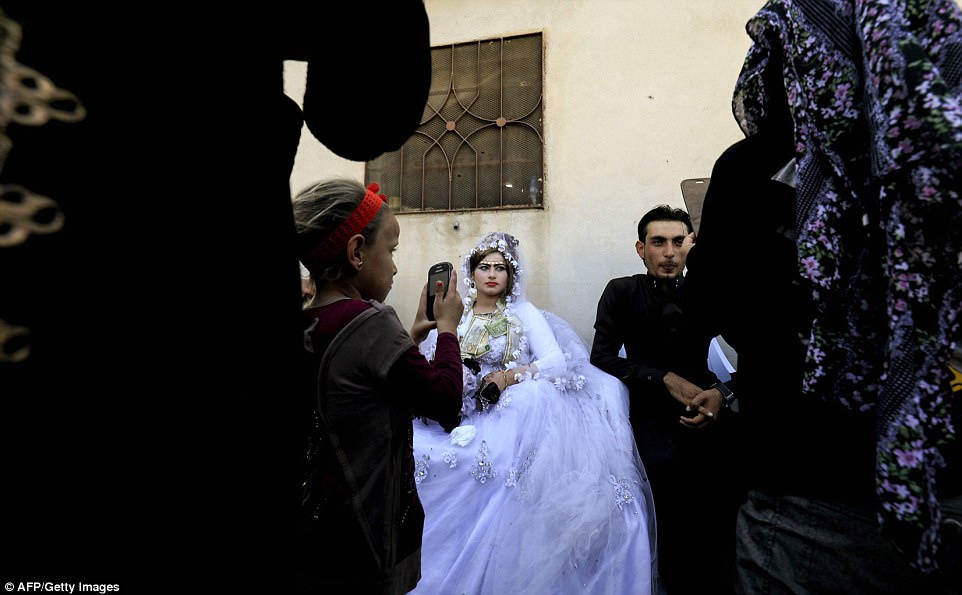 A young girl takes a picture of the bride Heba and groom Ahmed while they are seated during amidst the wedding  celebrations. During IS rule women were forced to dress from head to foot in black

The group banned music and dancing, imposed a strict dress code, prevented women from wearing make-up, and forcefully prohibited the mixing of men and women.

But in Jazra on Friday, music mingled with the sound of generators providing the only electricity in the ravaged district, which like much of the city was heavily damaged during more than four months of fighting.

Jazra was one of the first districts of Raqqa to be captured by the US-backed Syrian Democratic Forces, an alliance of Kurdish and Arab fighters that broke into the city in June.

The groom’s family, unlike many others who fled Raqqa during the fighting, were able to return to their neighbourhood and celebrate.

‘Before IS, there was dabke, songs and the traditional rituals of the region at our marriages, but IS banned everything, there was not a single celebration,’ the man in his fifties told AFP.

‘Today it’s a return to joy,’ he added, his face lit up with happiness. ‘It’s been a long time’ – 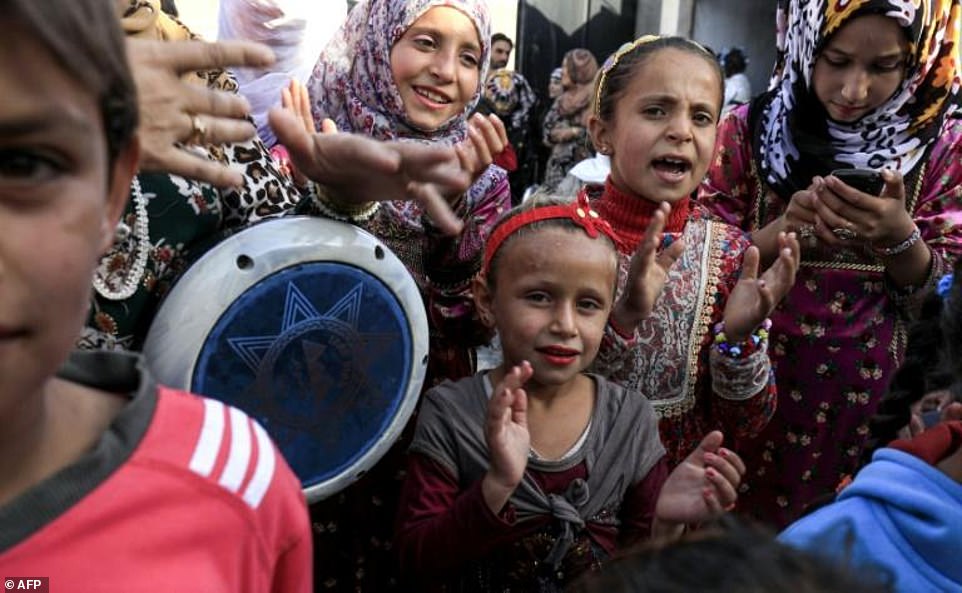 Syrian children, some of whom also used the opportunity to wear make-up, clap and dance during the wedding. When the Islamic State had the city in his iron-grip there was not a single celebration 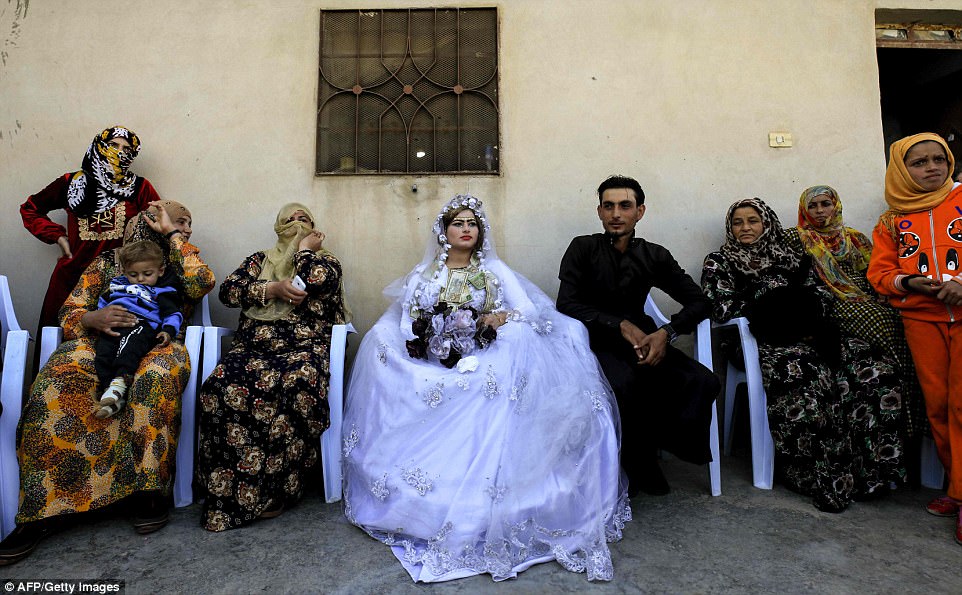 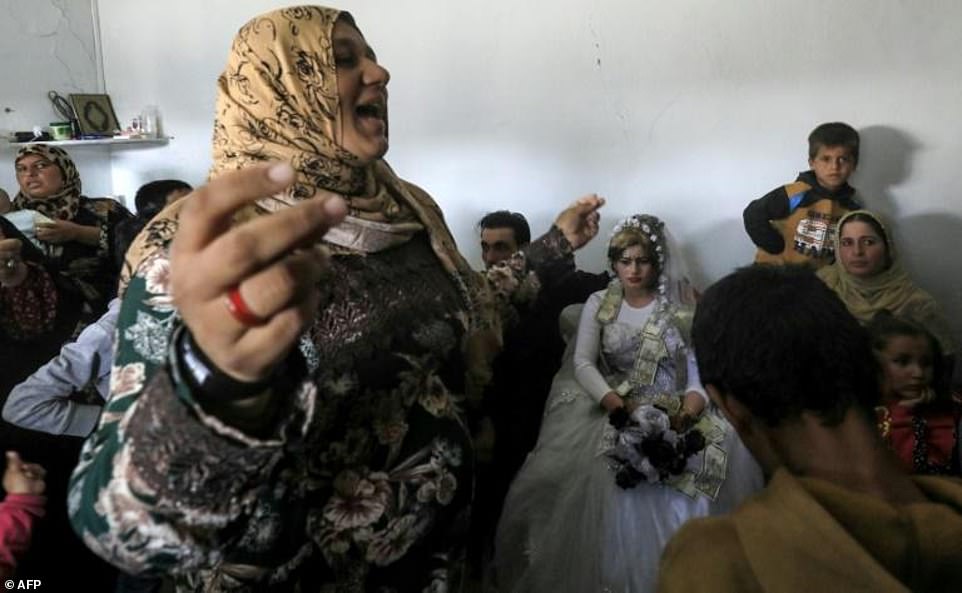 A Syrian woman dances in front of bride Heba and groom Ahmed. Women who attended the wedding took great delight in being able to dance, which they were prevented from doing during the rule of the Islamic State 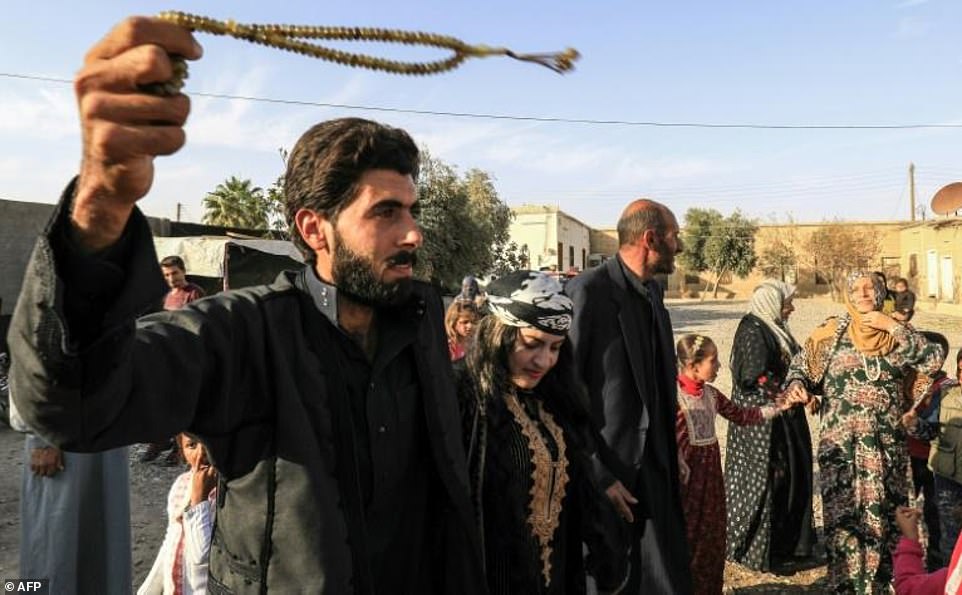 Guests performed their traditional dances while poems were also read out at the ceremony.

Almost everything in the scene would have been impossible during the three years of brutal IS rule.

Some covered their hair with matching patterned scarves, while others, including the bride, had their locks coiffed for the occasion.

Eighteen-year-old Ahmad wore a traditional brown robe, while his new wife was dressed in a frothy white wedding dress, a layer of tulle embroidered with a floral pattern draped over its ballgown bottom.

A delicate veil edged with white flowers rested on her tightly curled hair, and a gold headpiece dangled over her eyebrows, darkened with make-up. 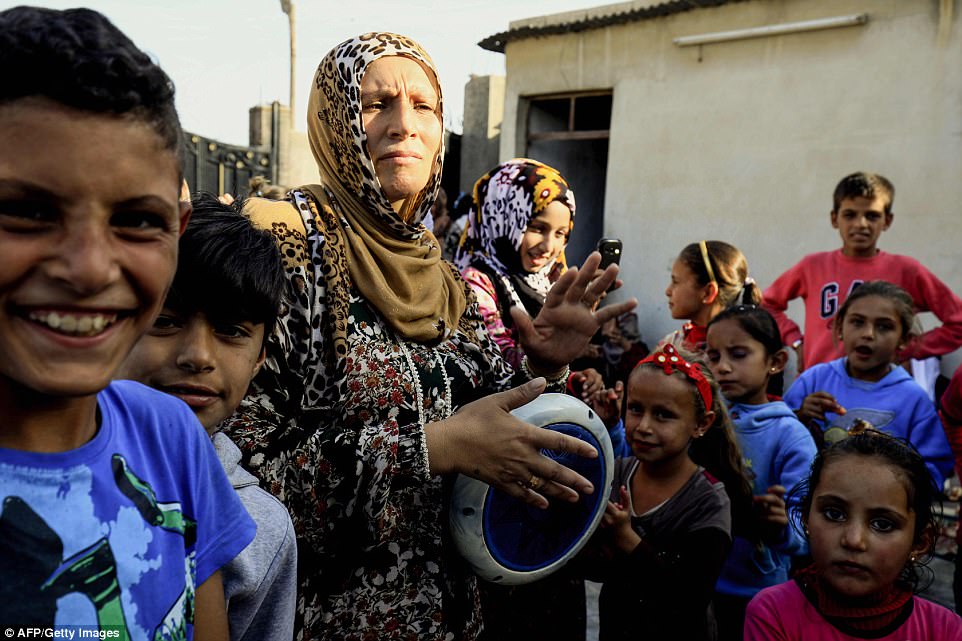 Music mingled with the sound of generators providing the only electricity in the ravaged district where the wedding took place. Many of the women wore patterned scarves 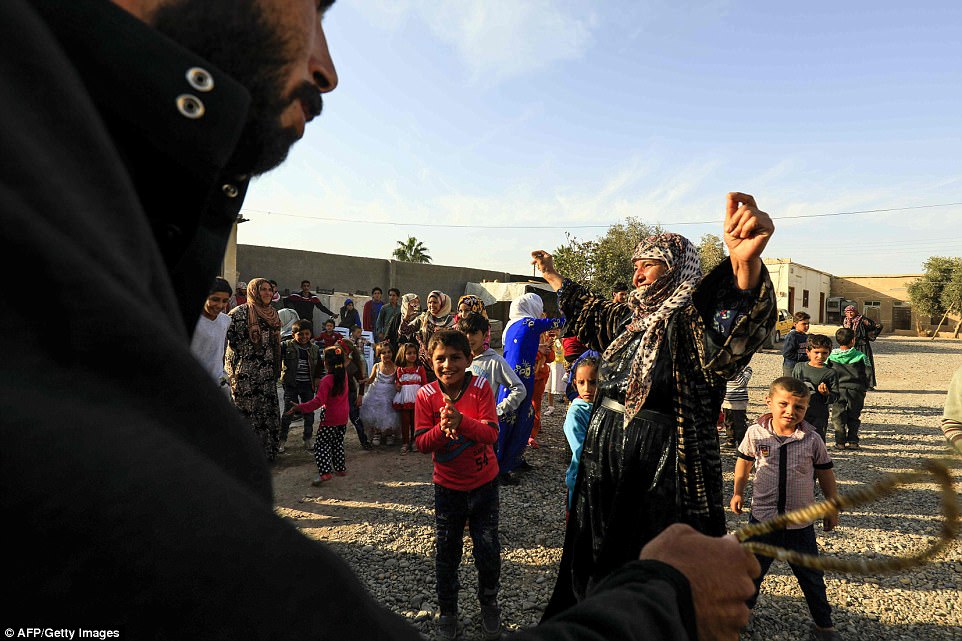 The delight on the faces of everyone who took past in the wedding is obvious. Many said they were ‘tasting life again’ after the dark days of the recent past 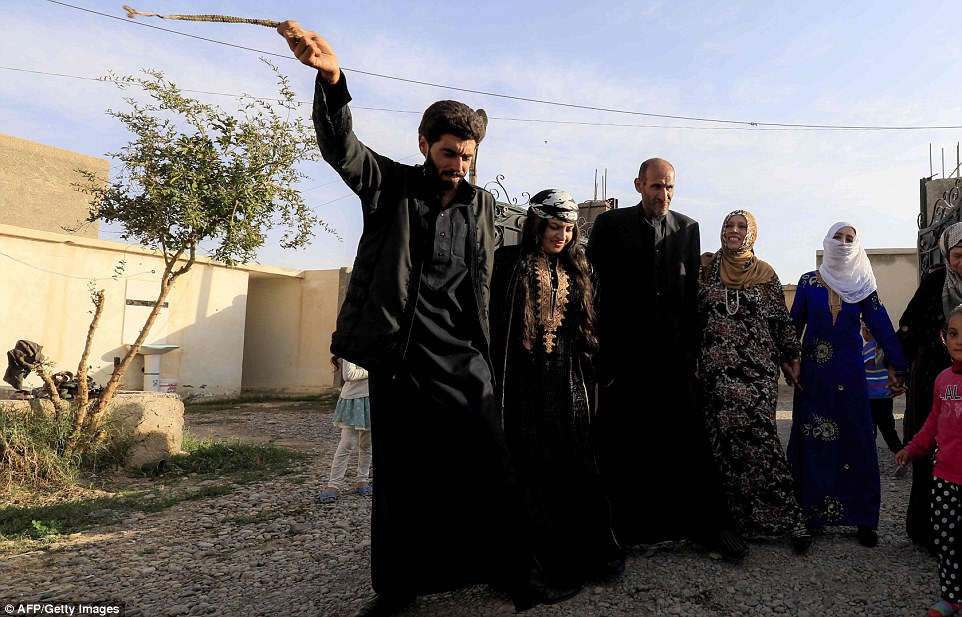 Despite the joy of the wedding guests, much of their city is virtually uninhabitable. Many buildings  have been destroyed and large parts of the city off-limits for fear of unexploded bombs 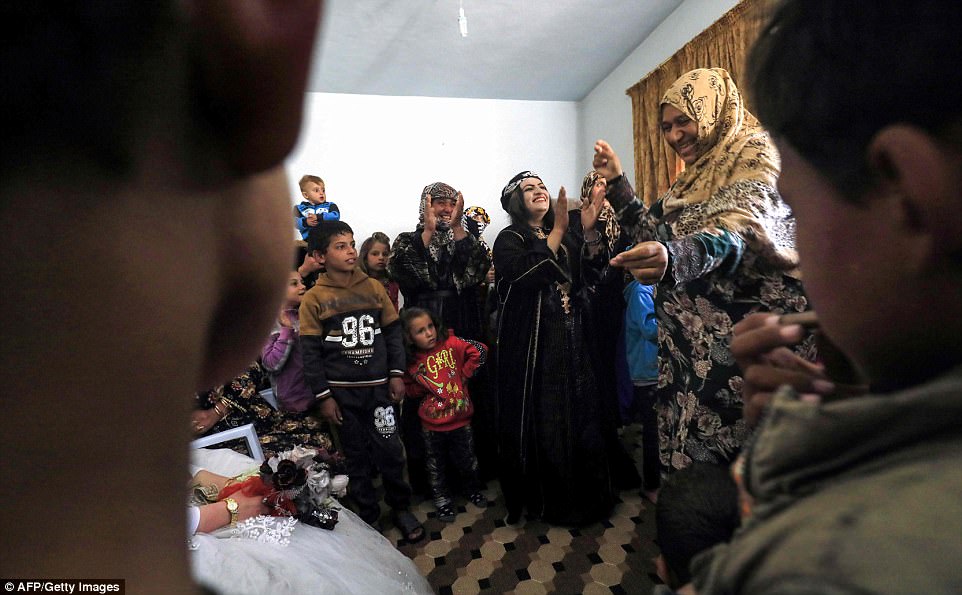 Women guests at the took obvious delight in sporting patterned robes and bright red lipstick. Residents of Raqa said ‘it has been a long time since we had a party’

Her hands were painted with henna patterns and she fiddled nervously with a bouquet of artificial flowers.

Around the couple, guests took photos with mobile phones while little girls also made-up with darkened eyebrows and coloured lips danced to the beat of the music.

Other children handed out water or brought chairs for late arrivals.

‘It’s been a long time since we’ve had a party,’ said Umm Ahmed, the groom’s 25-year-old cousin, dressed in a traditional robe with black hair tumbling over her shoulders.

‘We’re celebrating with joy this marriage after the end of IS’s rule,’ she said with a large smile. ‘We’ll party as we like’ –

The smell of perfume hung in the air, and women ululated in celebration. 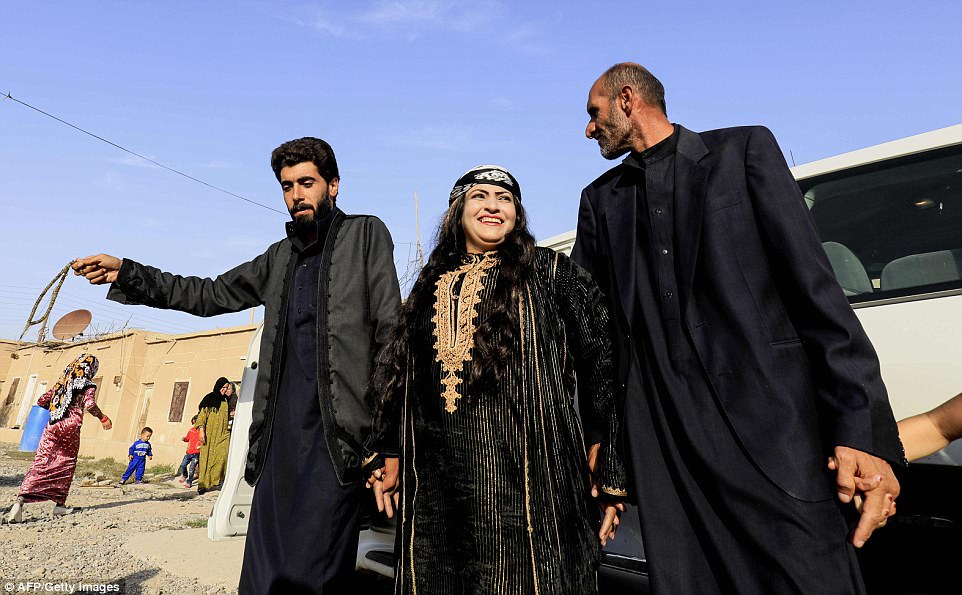 Men and women caught performing traditional dancing together would have received harsh punishment during the rule of the Islamic State. 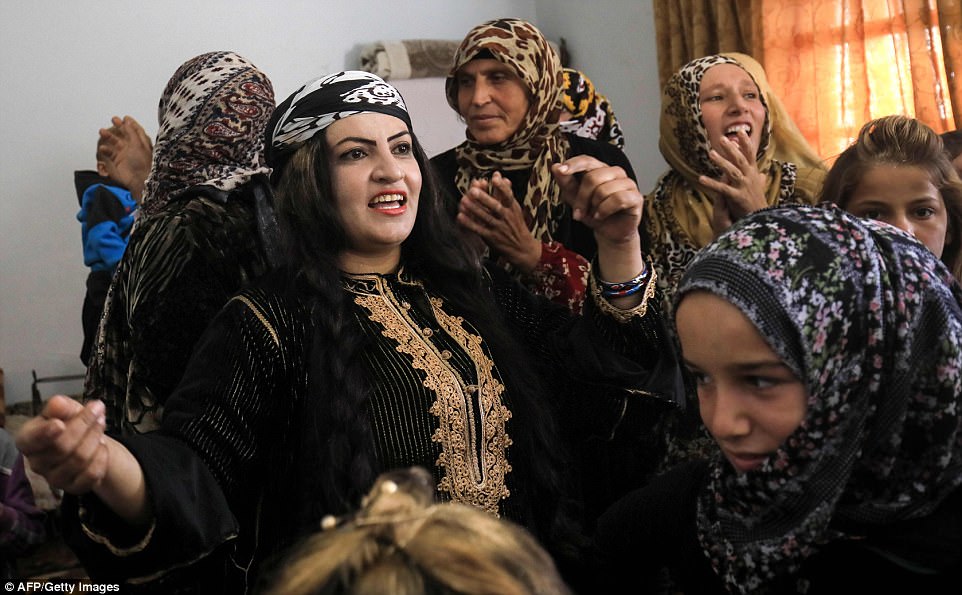 ‘It’s been a long time since we’ve had a party,’ said one of the women at the wedding, where the air was thick with perfume. 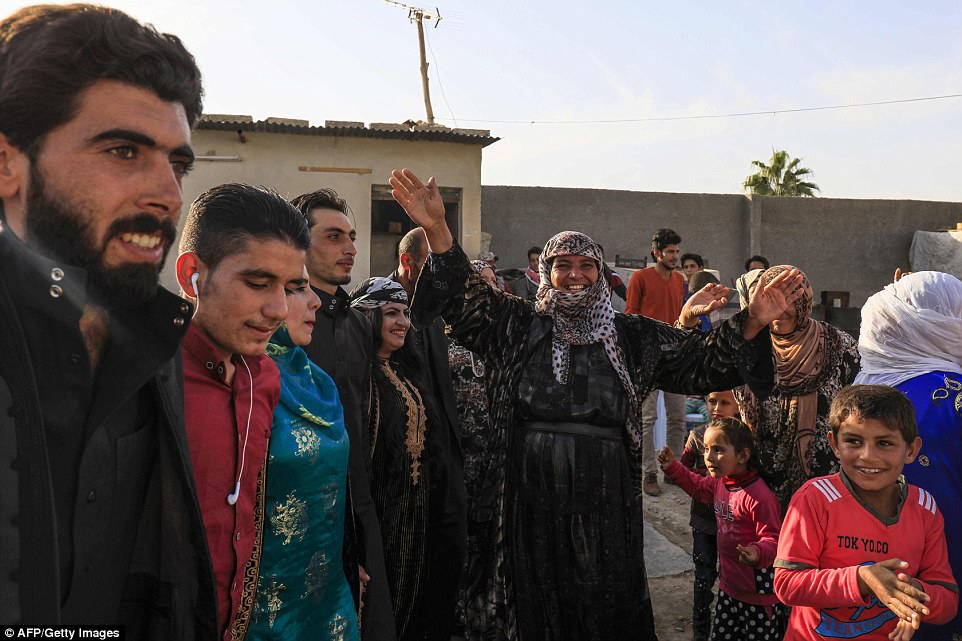 People at the wedding said they had been waiting a long time for this moment. For the guests, it the ceremony represented a glimmer of hope for the future 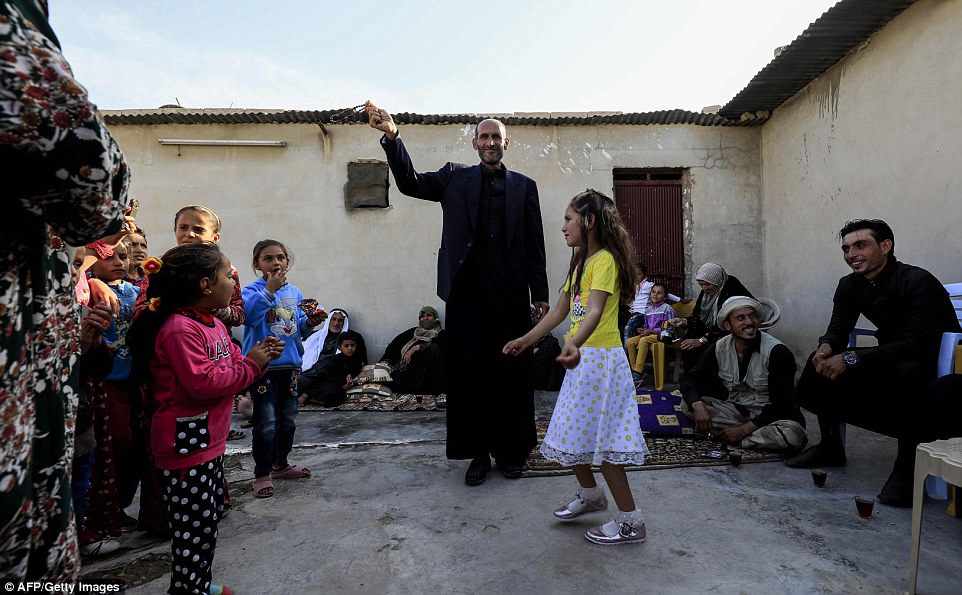 Groom Ahmad (left) looks on as children dance at his wedding. ‘Raqqa will be happy again,’ said the groom’s aunt as the celebrations

Khalaf al-Mohammed, another of the groom’s cousins, was delighted by the celebration.

‘It’s been years since we danced the dabke, we’re tasting life again,’ the 27-year-old said, leading the line of dancers and spinning his prayer beads.

‘Everyone was waiting for this moment. What use is there to a wedding when everything is black?’ he asked, referring both to the robes IS imposed on women and to the colour of the group’s flag.

‘Today everything is white,’ he said, with a smile.

For now, Raqqa is virtually uninhabitable, with many buildings destroyed and large parts of the city off-limits for fear of unexploded ordnance.

Hundreds of civilians were killed in the fighting and many residents are still searching for missing family members.

But for the wedding guests, the celebration was a glimmer of hope for the future.

‘Raqqa will be happy again,’ said Khaldiya, the groom’s aunt, 30, as she tapped out a beat on a small drum.

‘No one will prevent us from singing and dancing. We will party as we like.’