Lisa Wilkinson smacked down ‘Bunnings Karen’ as a ‘pandemic denier’ on national television on Sunday, saying shops have a legal right to insist customers wear a face mask.

The unidentified mask dodger filmed her own shocking outburst at Bunnings Warehouse in Melbourne’s south-east on Friday, a day after the Victorian Government made face masks mandatory for residents of Melbourne and Mitchell Shire.

Social media users dubbed the woman ‘Bunnings Karen’, a reference to a newly-emerged term for a self-righteous woman, usually middle-aged, who tells people how to do their jobs, asserts their rights and complains to the manager.

The Project host said there were plenty of ‘Covid deniers who are fuelling conspiracy and “scamdemic” narratives at the moment’.

She then showed footage of ‘Bunnings Karen’ telling staff they had no right to tell her what to do.

‘It is my right as a living woman to do whatever I want,’ the anti-mask activist told Bunnings staff members, who politely told her that a face-mask was a condition of entry to their store.

Bunnings Narre Warren staff were praised including the store manager (pictured) who handled the difficult situation with patience, focus and grace 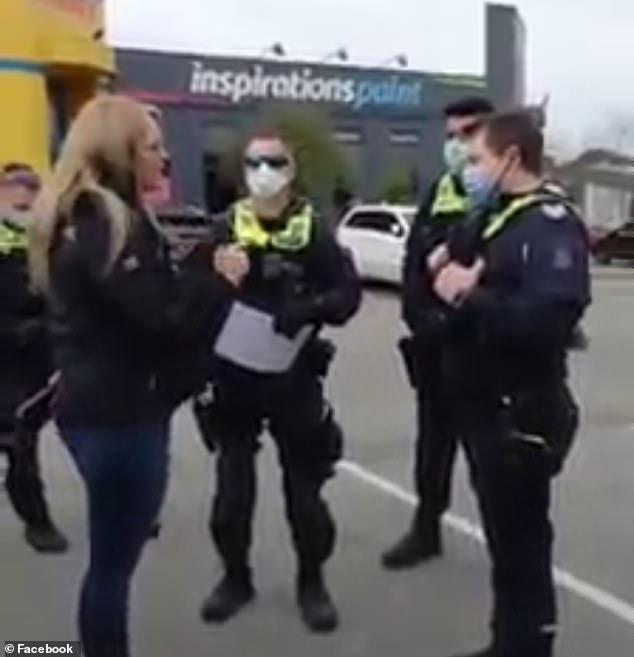 The woman, dubbed ‘Bunnings Karen’ was briefly handcuffed by Victoria Police outside in the car park of Bunnings, Narre Warren 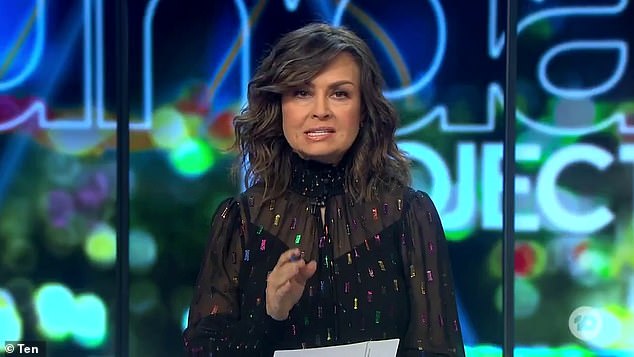 Lisa Wilkinson on Channel Ten’s The Project on Sunday night. She said shop owners have a legal right to tell people they must wear face masks before entering

Video of the woman’s extraordinary rant was posted to Facebook on Sunday as Victoria recorded 459 new coronavirus cases and ten deaths.

‘It’s a breach of the charter of human rights,’ she said as she filmed the staff on her mobile phone and threatened to sue them for discrimination.

In the car park outside she was briefly handcuffed by police and claimed her rights had been violated.

Ms Wilkinson, who hosts The Project on Channel 10, praised Bunnings staff for being patient and polite.

‘They never lost focus,’ she said.

Ms Wilkinson said the confrontation was ‘a waste of time and energy’ before setting Australia straight on what the law allows.

‘In case you come up against one of these pandemic deniers, here are the actual facts,’ she said.

‘Australian law says that private land owners or occupiers can take reasonable steps to protect themselves, their employees and people on their property.

‘So it would be legal for business including cafes and supermarkets to make it a condition of entry that customers wear a mask and sanitise their hands. End of story. They have every right’.

University of NSW epidemiology professor Mary-Louise McLaws told The Project that it was difficult to change social attitudes in a public health campaign but that the majority of people must wear masks for the good of public health.

‘People were reticent to wear a seatbelt and then eventually that became the social norm,’ she said.

‘So we need to either address those people’s concerns about individuality accurately or take the oxygen away from groups that are just not getting onboard.’

Professor McLaws is on the World Health Organization (WHO) Covid-19 advisory panel.

When the coronavirus pandemic first broke out in February there was an international face mask shortage which led both the WHO and Australian health authorities to issue advice against the public wearing of facemasks.

Australia’s health authorities were still advising the public as late as June that there was no benefit in people without symptoms wearing masks despite published evidence of asymptomatic transmission.

The Victorian government has now mandated public mask wearing in an effort to curb their escalating outbreak.

Face masks help to cut the transmission rate of coronavirus by catching your droplets of saliva at the mouth and nose, and they can also help stop you from becoming infected from other people’s aerosolised droplets.

‘When you are out and about, you cannot tell who is infected and who is not,’ said Professor Raina Macintyre, the head of the biosecurity research program at the University of NSW’s Kirby Institute, at the time.

Police now have the power to issue $200 on the spot fines for anyone who breaches the new rules.

Victoria’s total coronavirus case load hit 8,181 on Sunday night. Of those, 381 are health care workers with active infections, putting a strain on the hospital system.

The unidentified woman who confronted the Bunnings staff is believed to be a serial ‘Karen’ after similar footage emerged on Sunday showing an incident at Australia Post. 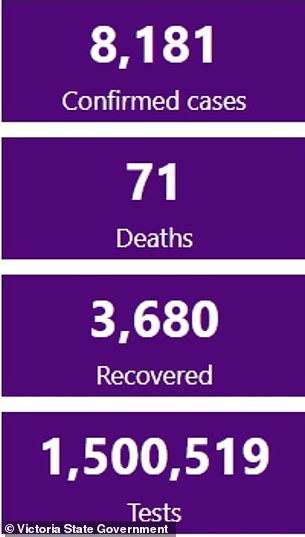 ‘I don’t need to wear a mask. If you could stamp that, it would be wonderful,’ the woman says in an imperious tone as she approaches the counter, her mobile phone camera already recording the startled employee.

The woman then launches into a tirade on how the staff member has no right to ask her to wear a face mask as he quietly serves her.

Both Bunnings Karen and Australia Post Karen sound identical and use similar language about their rights and the lack of authority of others.

‘We have security at all metro Melbourne and Mitchell Shire stores as support,’ she said.

‘But if you are just making a selfish choice that your alleged personal liberty, quoting some, I don’t know, something you’ve read on some website — this is not about human rights.’

Health experts agree that masks help stop the spread of coronavirus by providing a barrier to droplets from the mouth and nose.

The Victorian Government has mandated public face masks in an attempt to get the devastating outbreak under control.

‘If those directions are not followed, police are able to fine you. It is a $200 fine. It should never come to that,’ Premier Andrews told reporters.

‘But if you are just making a selfish choice that your alleged personal liberty, quoting some, I don’t know, something you’ve read on some website — this is not about human rights.’

Dr Coatsworth compared Bunnings Karen to those who threaten health workers in hospitals.

“That sort of behaviour has to stop. I acknowledge that wearing a mask can be difficult,” Dr Coatsworth told reporters on Sunday.