A retail assistant manager who lived off an unhealthy cycle of takeaway meals, sugary snacks and soft drinks every day has dropped seven dress sizes after she lost half her body weight naturally.

Jacinta Heiden, from Melbourne, weighed 128 kilos after she turned to large portions of lunches and double servings of dinner with a 1.25L bottle of Coke every night.

Before bedtime, the 27-year-old said she would find herself going on a sneaky ‘late night binge’ where she’d snack on chocolates, doughnuts, cakes, biscuits and raid the fridge for any leftovers from dinner.

But after suffering a severe joint pain in her ankle, the size 22 woman knew she needed to overcome her bad eating habits to get healthy.

Within 15 months, Jacinta – who now looks unrecognisable – slimmed down to a size eight after she exercised regularly and ate calorie-controlled meals without giving up chocolate.

Before and after: Melbourne retail manager Jacinta Heiden who lived off an unhealthy cycle of takeaway meals, sugary snacks and soft drinks every day has dropped seven dress sizes after she lost half her body weight naturally 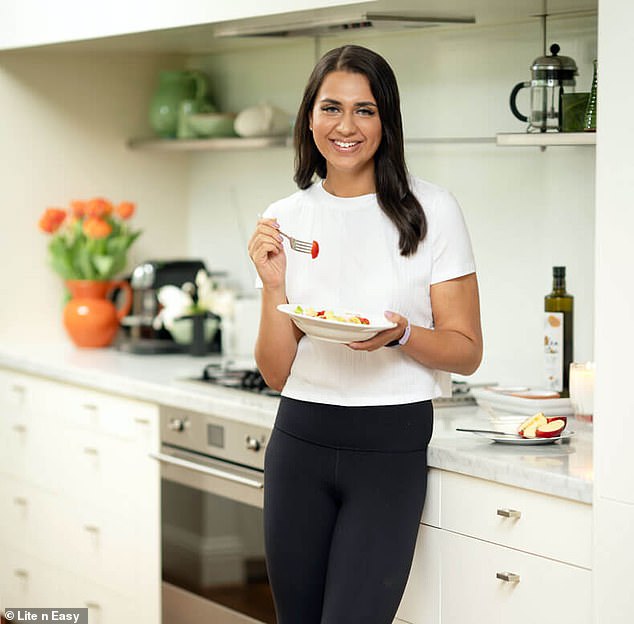 Within 15 months, Jacinta – who now looks unrecognisable – has slimmed down to a size eight after she exercised and tweaked her diet without giving up chocolate

Before: Jacinta’s unhealthy ‘day on a plate’

LUNCH: A large fried rice or noodles with teriyaki chicken with a bottle of coke

DINNER: Large meals from Hungry Jack’s or McDonald’s, or double servings of cheese-based pasta and chicken curry with a 1.25L bottle of Coca Cola

SNACKS: Whole bag of chips, half to a whole block of chocolate, cake or leftover dinner

Before her astonishing weight loss, Jacinta said she led an unhealthy lifestyle where she would never exercise and skip breakfast.

‘But I’d eat large portions of lunches and dinners that were either takeaway with a can or a bottle of Coca Cola,’ she told Daily Mail Australia.

‘I’d eat double servings of home cooked meals. I had a high soft drink consumption, I drank a 1.25L bottle of Coca Cola daily with dinner.’

Every night before bedtime, she would raid the kitchen for sugary snacks.

When she started suffering intense joint pain in her right ankle, which began affecting her performance at work in January 2020, she knew she had to get on top of her weight.

‘I knew at that point that things needed to change. So I made the decision to focus on my diet and break some bad habits,’ she said.

When her city was plunged into a strict stage-four lockdown due to Covid-19, she took the time to start exercising.

‘The business I work for closed their doors… So I took the opportunity with my time at home to introduce exercise each day,’ she said. 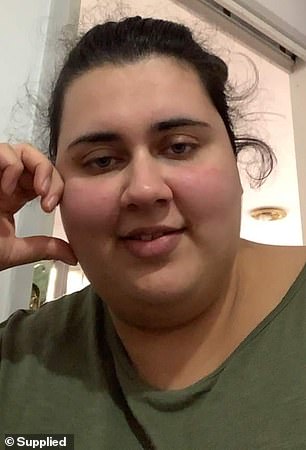 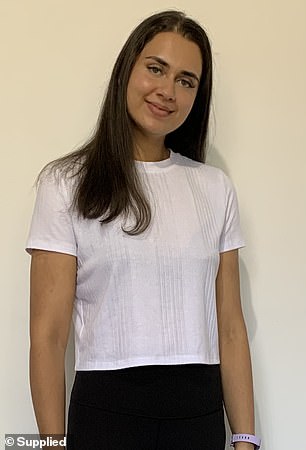 She weighed 128 kilos after she turned to large portions of lunches and double servings of dinner with a 1.25L bottle of Coke every night. But after suffering a severe joint pain in her ankle, the size 22 woman knew she needed to overcome her bad eating habits to get healthy 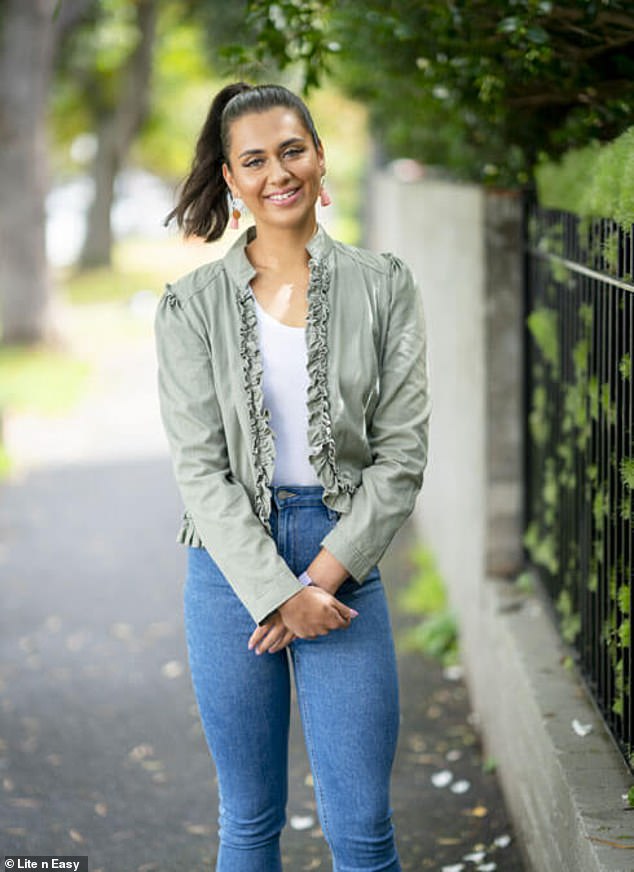 More than a year later, Jacinta has now weighs 63 kilos after dropping an incredible 64 kilos – and she can now fit into sizes eight to 10 clothing

After: Jacinta’s healthy ‘day on a plate’

‘I started with a one-hour morning walk and a one-hour evening walk daily. Then I began to do one to one-and-a-half hours of cardio HIIT workouts using my treadmill and exercise bike in the morning and a one hour walk in the evening.

‘This helped me lose around one to one-and-a-half kilos a week.’

‘I started to cut down my soft drink intake by switching to a lower sugar soft drink variety and then eventually cutting it altogether and just drinking water,’ she said.

‘I began lowering my salt and sugar intake by reducing the amount of high salt and high sugar snacks I was consuming at night through binge eating.’

At first, Jacinta said she was still struggling with her old eating habits.

‘It was a real struggle because I still found myself occasionally eating some home cooked food and having a couple of late night binges in addition to my Lite n’ Easy meals in the early months.’

She has been keeping up with the same exercise routine every morning and evening – and she now eats healthy meals but also treats herself to anything she wants, within reason

I prefer exercising in the morning ahead of work starting at 5am or 5.30am

I start with 15-30 minutes of cardio using my exercise bike/treadmill/cross trainer.

Then 30-45 minutes of alternate workouts arms/legs

Some of my favourites include:

From July, she shifted to the program’s 1,200 calorie meal plan offering her smaller, lighter meals throughout the day, which helped her curb hunger, leaving her less likely to get sugar cravings.

More than a year later, Jacinta weighs 63 kilos after dropping an incredible 64 kilos – and she can now fit into sizes eight to 10 clothing.

‘I feel amazed, proud and on the verge of happy tears seeing how far I have come,’ she said.

‘I’m just amazed how using my time during the lockdown last year changed my life so much and for the better. I’m just ecstatic, beaming and overjoyed.’

She has been exercising every morning and evening since losing half her body weight – and she now eats healthy meals – but occasionally treats herself to anything she wants, within reason.

‘I don’t mind the occasional chocolate every now and again and I go on trips to a pancake parlour for a dessert with friends occasionally. So guilty pleasures and occasional treats are definitely okay,’ she said.

‘Just remind yourself why you started the process, where you want it to go and how far you’ve already come. Every little bit of work or effort you apply to your weight loss journey daily helps you get that little bit closer to a healthier, happier you. I wouldn’t change a thing. It took a lot of trial and error but I don’t regret a second of it.’