Little girl, 7, shows her faith in Santa is unshakable after Trump asked whether she still believed

The 7-year-old South Carolina girl who President Donald Trump almost made question her belief in Santa still made all the necessary preparations for a visit from the big man on Monday night.

Collman Lloyd was buzzing after her chat with the leader of the nation via the NORAD Santa Tracker but it didn’t stop her getting down to business and making sure the festive character had a snack to keep him going.

The child revealed she put out sugar cookies and chocolate milk that had vanished by Christmas morning, and her faith was kept alive after an American Girl doll appeared wrapped under the tree. 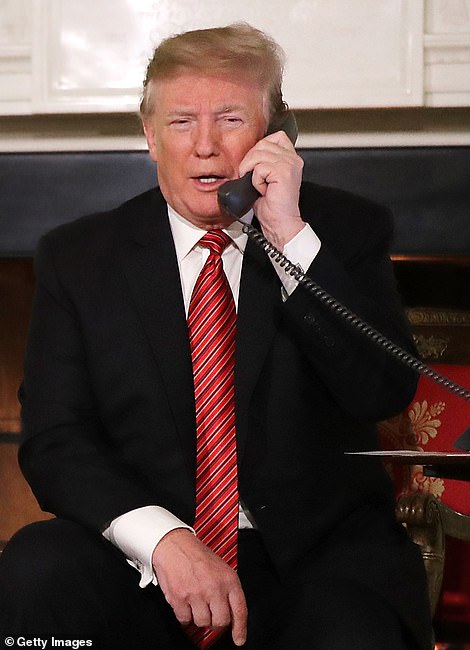 Collman Lloyd, 7, still put out cookies and milk for Santa Claus on Christmas Eve despite her chat with President Trump

Despite public outrage after Trump, 72, posed a question that could upset any child, it seemed the youngster was just so keen to answer politely when he said ‘Are you still a believer in Santa?’ that she didn’t have time to digest the meaning.

‘I was like, “wow.” I was shocked,’ she said about her surprise phone call with Trump. she told The Post and Courier that she drowned out any doubtful voices regarding the magic of Christmas after the chat. ‘It wasn’t really (nerve-wracking), I just had to think of what the truth was.’

Trump seemingly tried to make himself feel better about the blunder by asking her to approve of his right to ask. 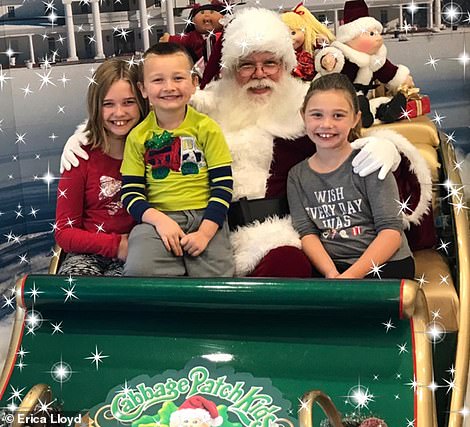 Unlikely to make her feel better about the calling to find out where Santa was in the process of dropping off gifts, he added: ‘Because at seven it’s marginal, right?’

Luckily, Lloyd doesn’t use ‘marginal’ in her vocabulary so continued to answer politely with a ‘yes, sir’ while being none the wiser.

But with her 10-year-old sister, 5-year-old brother and a friend listening in on the call, hopefully it didn’t ruin December 25 for anyone else.

The phone call did get Lloyd thinking more about the president though. A big thought that crossed her mind in the aftermath of the flopped conversation seemed to be the extent of Trump’s experiencing talking to children.

‘Most people know this question. I would like to ask if he has any kids,’ Lloyd said. ‘I’ve honestly never heard of them or seen any of them so I was wondering.’

Trump appeared to try to keep things light as he sat beside his wife, Melania, in front of a roaring fireplace beneath a portrait of former President Abraham Lincoln. He had spent the day complaining about his decision to remain at the White House because of the partial government shutdown.

Despite a day of travel, Melania looked stunning in a dark blue, high-necked dress and deep red heels, ready to take calls.

Trump, who had been scheduled to leave for his Florida vacation home on Friday, had opted instead to stay at the White House during the shutdown so far, which occurred after he and top lawmakers failed to end an impasse over funding for his proposed wall along the border with Mexico. 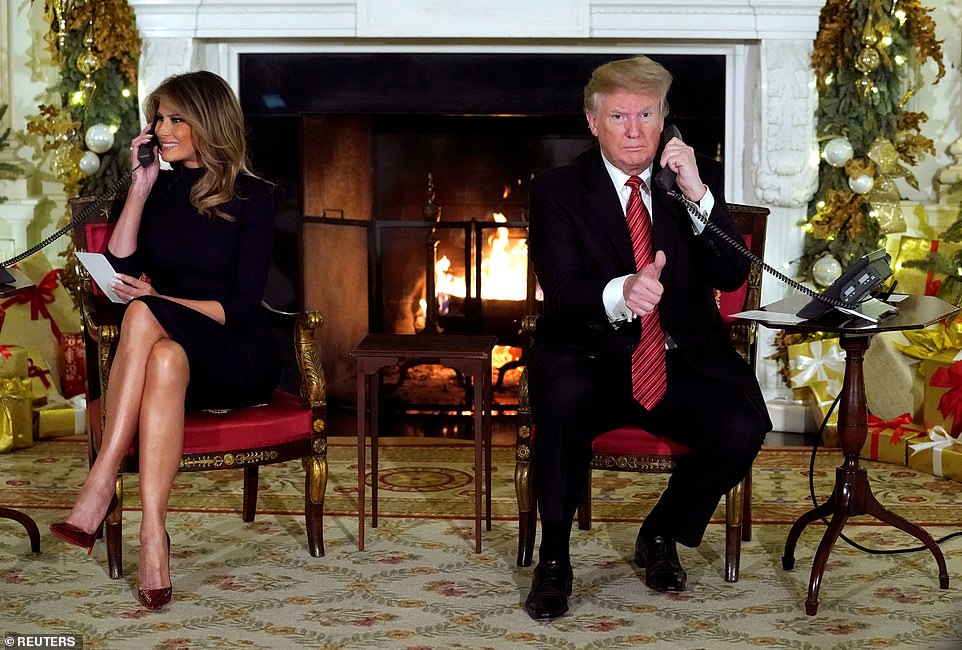 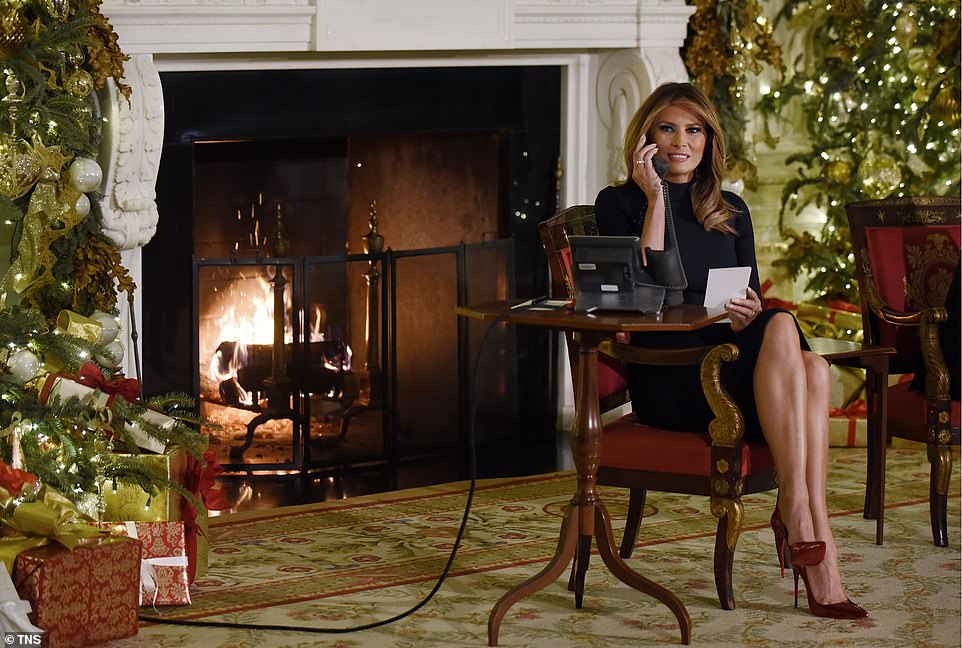 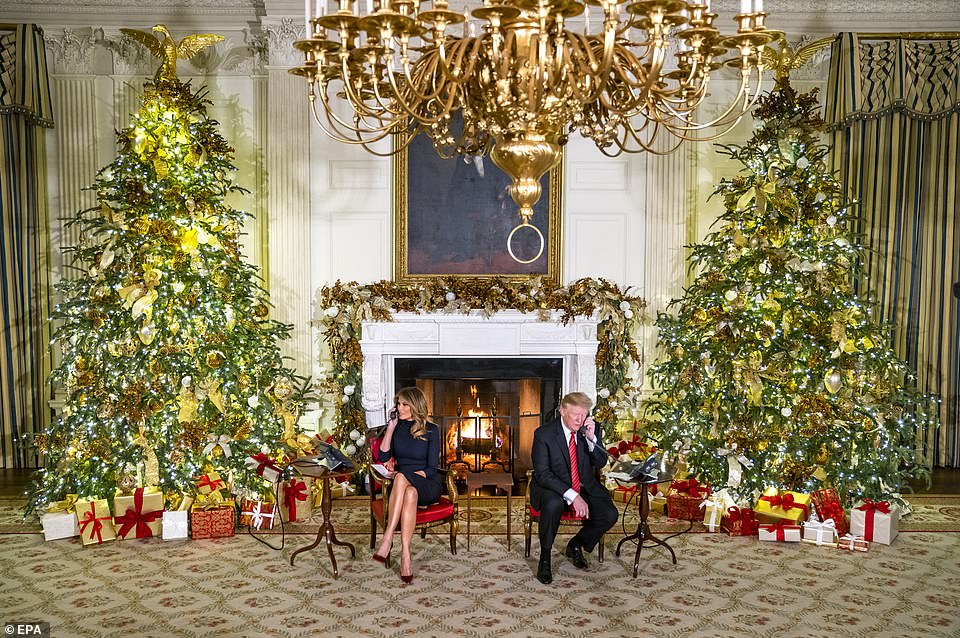 ‘I am all alone (poor me) in the White House waiting for the Democrats to come back and make a deal on desperately needed Border Security,’ Trump tweeted on Monday.

Trump’s Republican Party holds majorities in both congressional chambers until January 3, when Democrats take control of the House of Representatives. 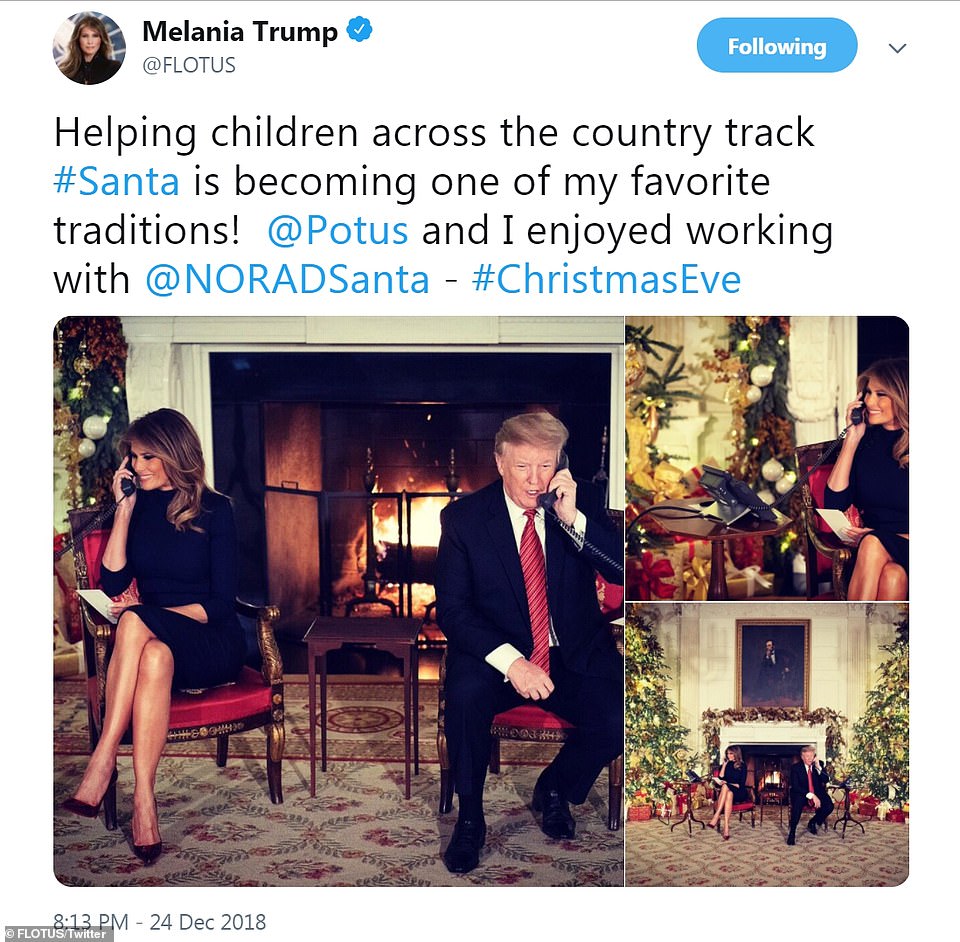 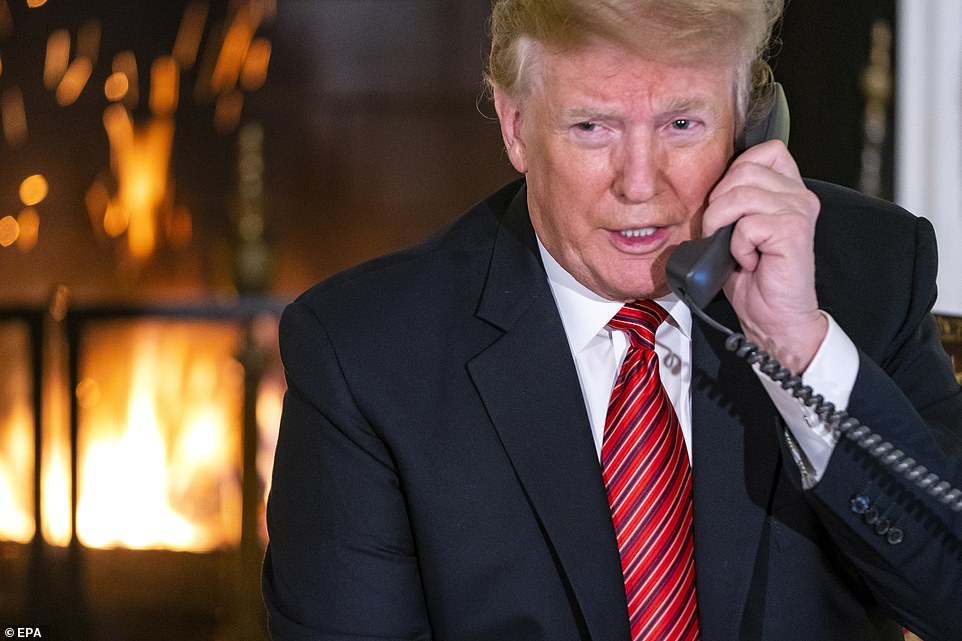 Asked by reporters if any progress had been made on government funding talks, President Trump said there was nothing to report

While on the previous Christmas Eve the Trumps took the phone calls in the living room of Mar-a-Lago, Melania cut short her time in Florida this year to be with her husband for the holiday tradition.

But even Christmas could not keep out news about the shutdown. Asked by reporters if any progress had been made on government funding talks, Trump said there was nothing to report.

President Trump also spent most of Christmas Eve while waiting for the first lady to return watching Fox News and tweeting his demands for funding of a border wall.

Despite the stock market taking major hits lately, he also took time to tweet an attack on the Federal Reserve as the Dow Jones Industrial Average dropped 650 points on what was being described as the market’s worst Christmas Eve ever. 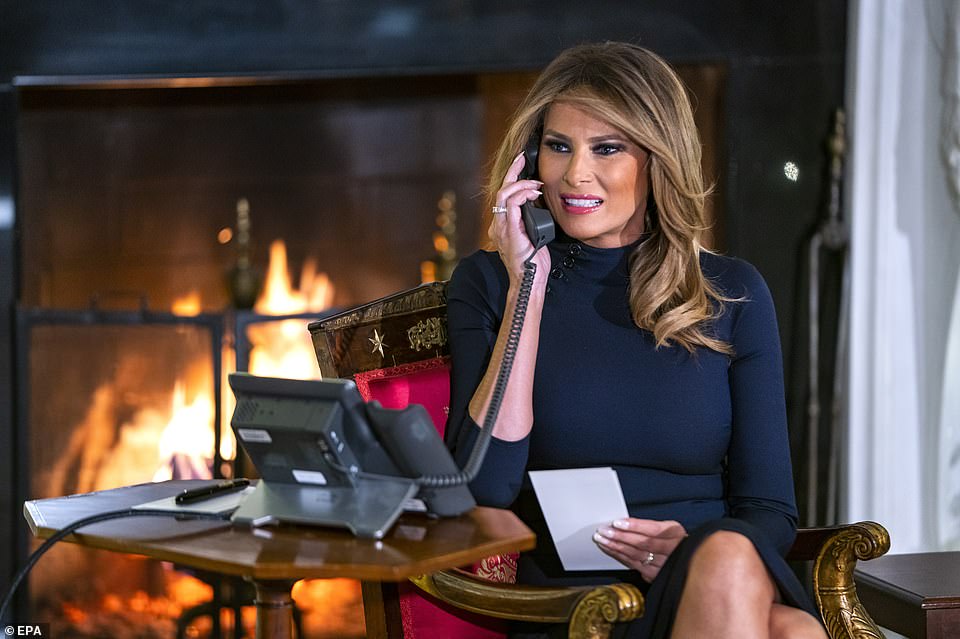 Every Christmas Eve, the North American Aerospace Defense Command in Colorado Springs, Colorado, claims to track Santa Claus’ flight across the globe, a tradition dating to 1955, when a department store printed the phone number of a NORAD colonel in a Christmas newspaper ad by mistake.

This year, though, the NORAD calls came at a precarious time for the president, who is mired in crises, from a government shutdown that has affected a quarter of federal agencies and departments to a stock market selloff amid Trump’s public criticisms of the Federal Reserve.

The NORAD calls were the first time Trump has been seen in public since the shutdown began. NORAD said on Friday it would continue the tradition in the event of a shutdown, adding in a tweet that military personnel would be supported by 1,500 volunteers.

Trump’s unusual foray into discussing a kid’s belief in Santa is a departure from presidential interactions in the past, such as in 1961 when President John F. Kennedy dealing with Cold War politics reassured a worried Michelle Rochon of Michigan that he even spoke with Santa Claus to confirm he would be keeping to his appointed rounds.

Trump and Melania head to the National Cathedral