Jade Thirlwall is being lined up as the BBC’s new presenter after impressing bosses with her hosting work on Little Mix: The Search, it has been reported.

The singer, 27, delighted audiences with her entertaining comments during the girl band’s talent show in October and also made a good impression as a guest judge on RuPaul’s Drag Race in 2019.

It comes amid claims that the group – which also includes Perrie Edwards, Leigh-Anne Pinnock and Jesy Nelson – are set to launch solo careers once their record deal ends, with Jesy already temporarily leaving the band due to ‘medical concerns’.

New role? Singer Jade Thirlwall is being lined up as the BBC’s new presenter after impressing bosses with her hosting work on Little Mix: The Search, it has been claimed

According to The Sun, Jade has been spotted by BBC bosses as a potential new host for some of their high-profile shows.

An insider told the publication: ‘The Beeb see her as a young Davina McCall and are trying to come up with some concepts for her now.

‘She shone on The Search and really stood out when she was on RuPaul.

‘Jade has everything to make a great presenter – she can read an autocue while being a bit spontaneous and fun. Not to forget she’s very easy on the eye.’

MailOnline has contacted Little Mix’s representative and the BBC for a comment. 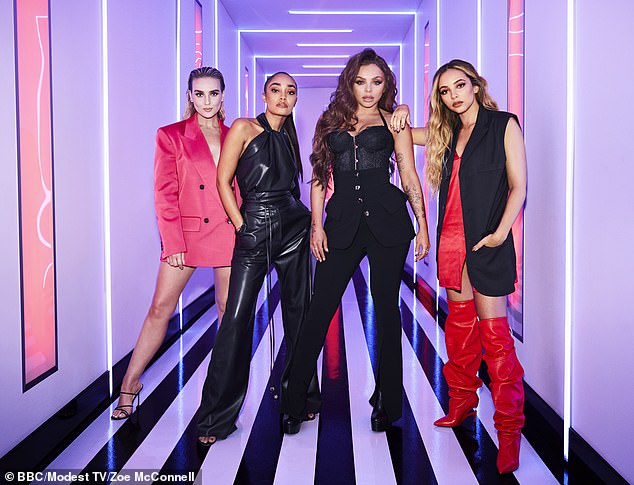 Claims: It comes amid reports that the girl group are all set to launch solo careers once their record deal ends next year (pictured left to right: Perrie Edwards, Leigh-Anne Pinnock, Jesy Nelson, and Jade Thirlwall)

On Wednesday it was reported that the band are all planning to go solo after it emerged Jesy has temporarily left the band due to ‘private medical concerns’.

They are said to have been secretly meeting with industry bosses as well as new managers and agents.

A source told The Sun that the girls – who only released their sixth studio album Confetti earlier this month – had been ‘open and honest’ with each other.

They added that the group still have a tour to complete next April and will see it through, even if it is delayed due to Covid-19. 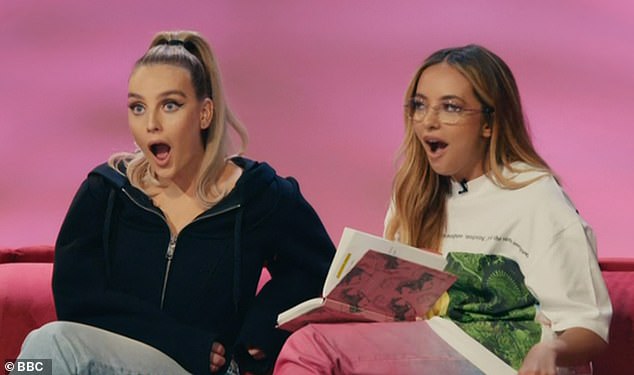 Making an impression: Jade is thought to have impressed BBC bosses with her hosting work on Little Mix: The Search (pictured on the show with bandmate Perrie) 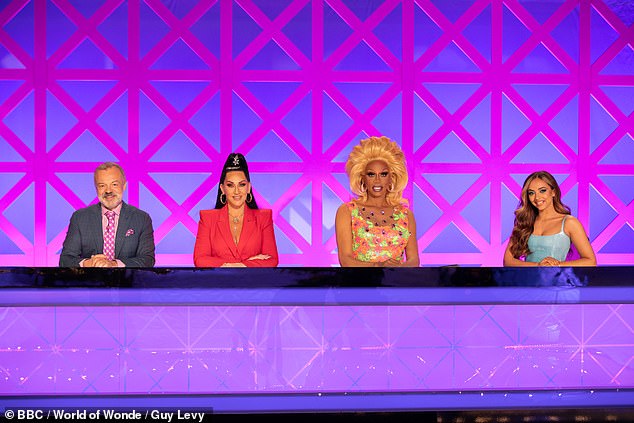 Loving it: The singer also delighted audiences when she appeared alongside Michelle Visage, Graham Norton and RuPaul on Drag Race last year

The insider also said the ladies are trying to emulate Take That, where each member drifts out to work on their own projects but come back together at different times.

They also claimed there is no ‘bad blood’ between the group and they are all supportive of each other’s wishes to go solo.

Meanwhile, Jesy is taking an ‘extended break’ from the girl band due to a ‘private medical reason’, after she recently missed hosting the MTV EMAs and an appearance on the finale her band’s show, The Search.

A representative for the band said: ‘Jesy is having extended time off from Little Mix for private medical reasons. 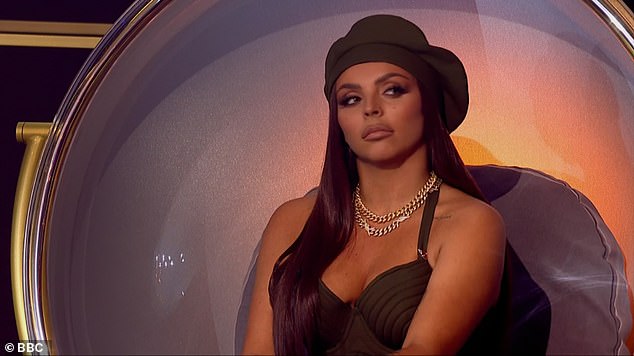 Taking time out: They are said to have been privately meeting with industry bosses as well as new managers and agents while Jesy, 29, also plans to kick start a solo career when she is feeling better

‘We will not be issuing any further comment currently and ask media to please respect her privacy at this time.’

Jesy’s break comes following great success for Little Mix, with both their brand new album ‘Confetti’ as well as their talent show Little Mix: The Search.

This saw them put together a number of bands who competed against one another to win a place support the girl group on their UK and Ireland tour next year.

Two weeks ago Jesy was forced to pull out of the finals of Little Mix: The Search, after falling ill.

The pop starlet was due to appear on the grand finale of the competition, but a statement released just hours before the live show revealed that she was unwell.

She was also unable to host the MTV EMAs, or perform alongside her bandmates as planned. 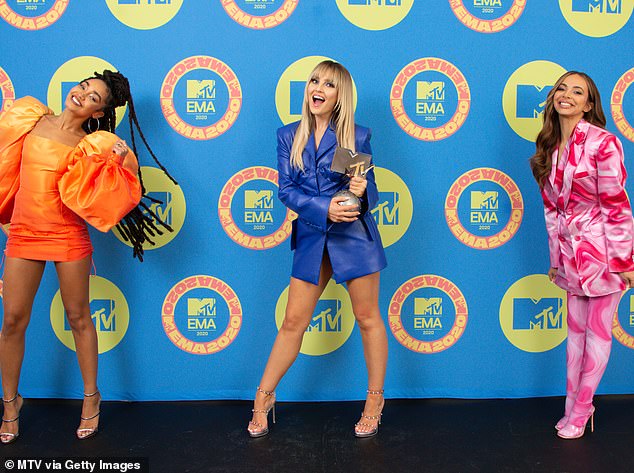 Going it alone: Perrie Edwards, Leigh-Anne Pinnock and Jade Thirlwall are planning on launching solo careers next year at the end of their existing deal

A statement released to MailOnline read: ‘Jesy is unwell and will not be appearing on tonight’s final of Little Mix The Search. She will also not be hosting or performing at tomorrow’s MTV EMA’s.’

The Little Mix girls had been due to host the 27th edition of one of the biggest nights in global music – the 2020 MTV EMAs – on November 8.

The band – who have been nominated for Best Pop, Best Group and Best Virtual Live, previously announced their gig on Instagram, saying ‘IT’S HAPPENING!

‘We are SO excited to announce that we’re going to be hosting the @mtvema’s on November 8th. This is gonna be so much fun!’

Girl power: The rest of the band appeared without Jesy to decide the winner of the first series of their show 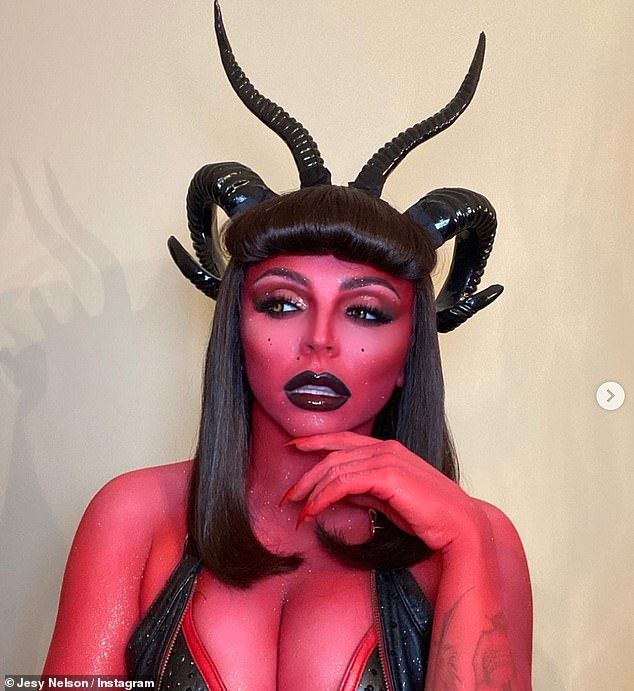 Last posted: Jesy last posted on her Instagram page on October 31 where she shared a snap of herself dressed up for Halloween

The rest of the band appeared without Jesy to decide the winner of the first series of their show.

In a tweet from the Little Mix account, they penned: ‘Can you believe tonight’s the FINAL of @LMTheSearch!!

‘We’re unbelievably proud of all 6 bands and we can’t wait to see the final 4 perform! We’re so sad Jesy won’t be able to join us tonight, but we have such an amazing show in store for you all x.’

Little Mix are slated to head on tour in April next year with their new album Confetti, but it is currently unclear whether Jesy plans to rejoin the group by then.

It is also thought that the band’s dates may also be delayed depending on Covid-19 restrictions nearer the time the tour is due to kick off.

Little Mix were crowned the winners of The X Factor in 2011 when they become the first band to ever win the show in its history.

The girls shot to stardom with their first single Wings, before topping the charts with Black Magic and Shout Out To My Ex.

They were signed to Simon Cowell’s record label Syco until November 2018 when they switched to rival label RCA.

Leigh-Anne said at the time: ‘We were with Syco for seven years and had an incredible journey but it’s going to be nice to change it up.’ 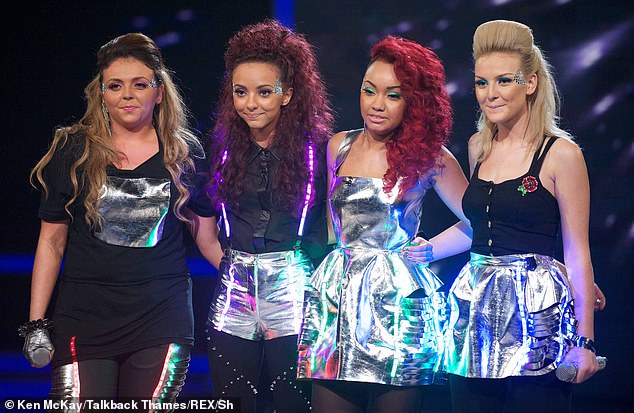 Stars: The girl group, consisting of Jesy, Jade, Perrie and Leigh-Anne, were mentored by Tulisa Contostavlos