Liverpool have only failed to score in four games this season, and three of them have been in Europe. Short-term it means they are going to have to do it the hard way when these teams next meet in Bavaria. As a pattern, it may mean there is something still to be said for those crafty, resilient defenders, that populate this tournament like traps.

Bayern Munich are not the quickest at the back, but they know the course and distance and it showed. They kept a full strength Liverpool forward line at bay and frustrated the home crowd into a state of tetchiness.

Anfield was its usual noisy self, but long before the end there was a sense of frustration, that their magic trio were being handled. Liverpool had decent possession and good chances and were the better team – but Roberto Firmino was replaced by Divock Origi with 15 minutes remaining, a sure sign the best laid plans were going awry. 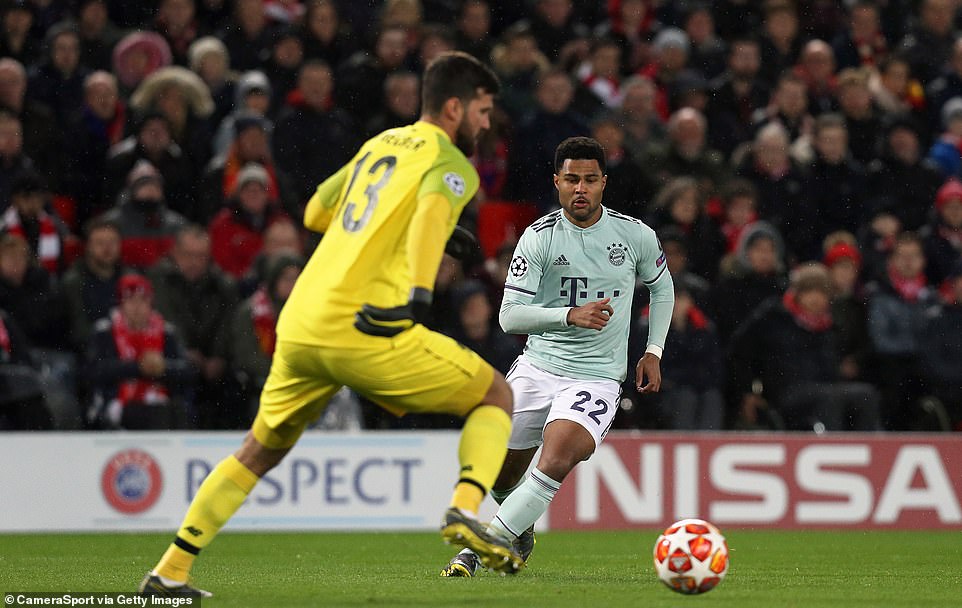 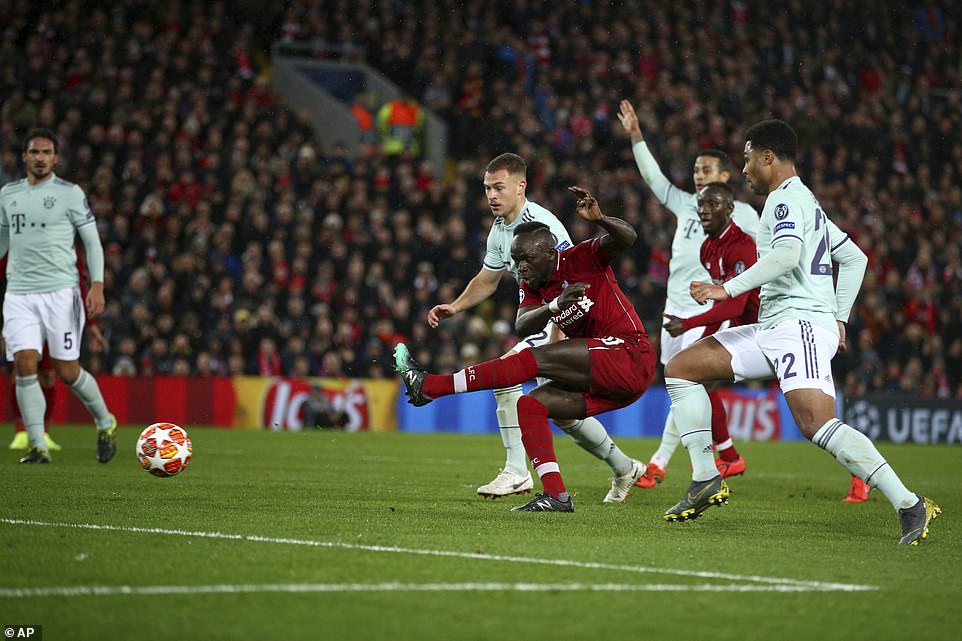 Sadio Mane missed one of the clearest chances to score in the first half, screwing a shot wide from eight yards 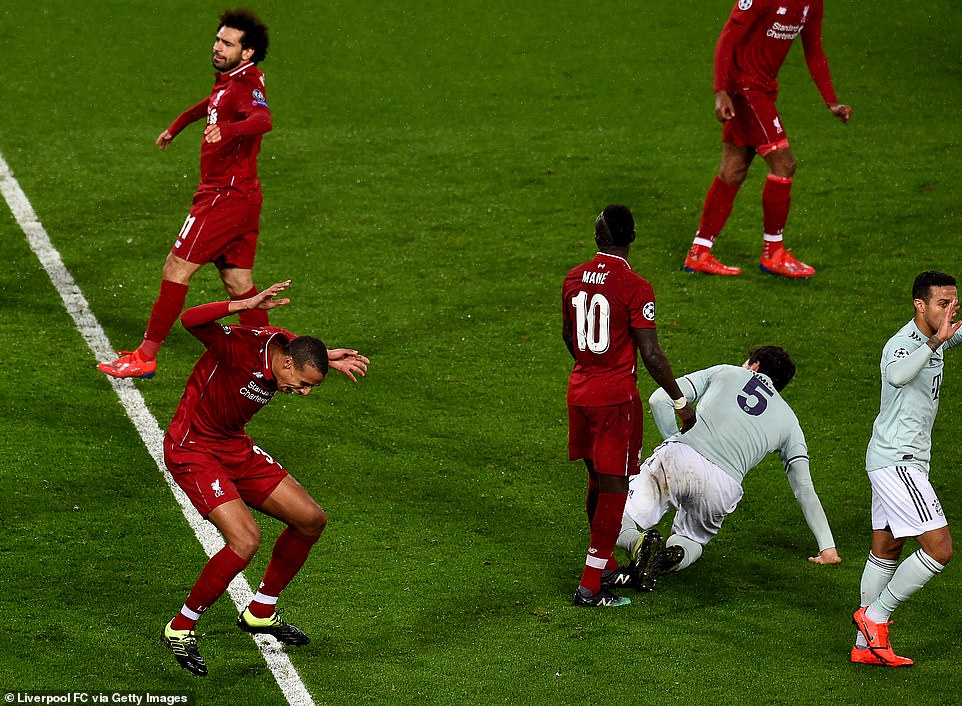 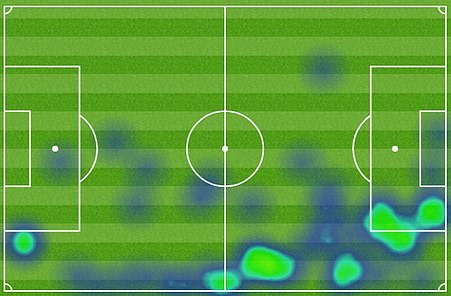 Serge Gnabry was a constant advanced threat for Bayern Munich down the right wing. For more stats, facts and graphics, check out our exclusive MATCH ZONE service here.

It is far from a lost cause, mind. Liverpool usually score and, every time they do in the return leg, Munich will have to match it with double. Even a goalless draw gives them a puncher’s chance on penalties, and Virgil van Dijk will be back, too – although there was little wrong with Liverpool’s marshalling of Robert Lewandowski in his absence.

Munich’s striker had outscored Liverpool on his own in the Champions League group stage, but there was little sign of his status as the competition’s top scorer here. Quick feet, yes, wonderful movement, but scarcely a meaningful intervention in front of goal. His greatest contribution was the frissons of anxiety his very presence caused. He has a brilliant record against Joel Matip in Germany, too, but it did not show.

As Liverpool probed and found only dead ends, it certainly put Tottenham’s three-goal winning margin over Borussia Dortmund into perspective. Dortmund lead Munich in the Bundesliga, but there was little sign Liverpool could slice through Niko Kovac’s side with Tottenham’s ease. 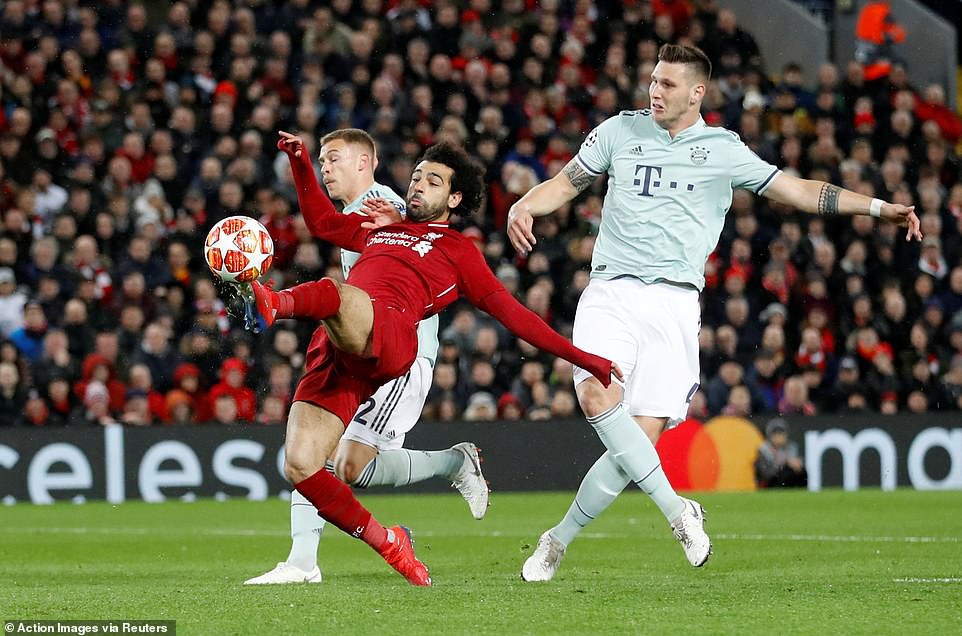 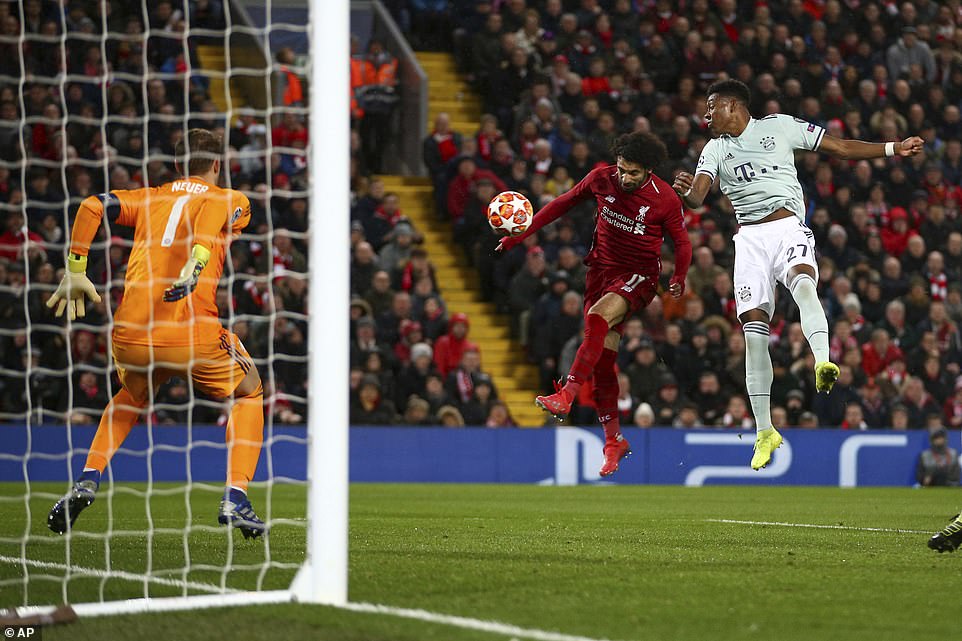 Salah missed a few good openings in the first half, heading one chance wide of the goal at the far post 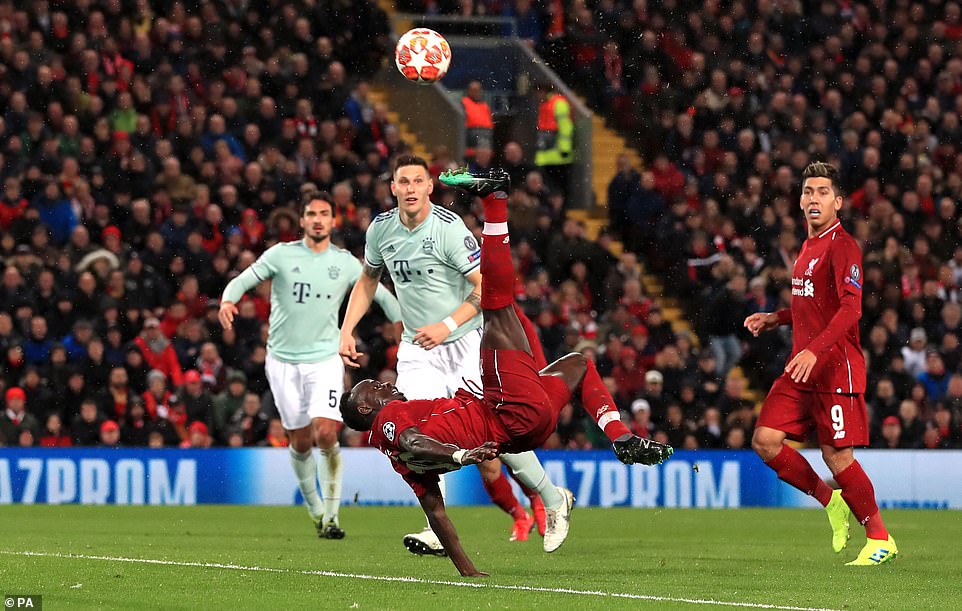 Sadio Mane had an acrobatic opportunity in the first half, but sent his overhead kick well wide of the target 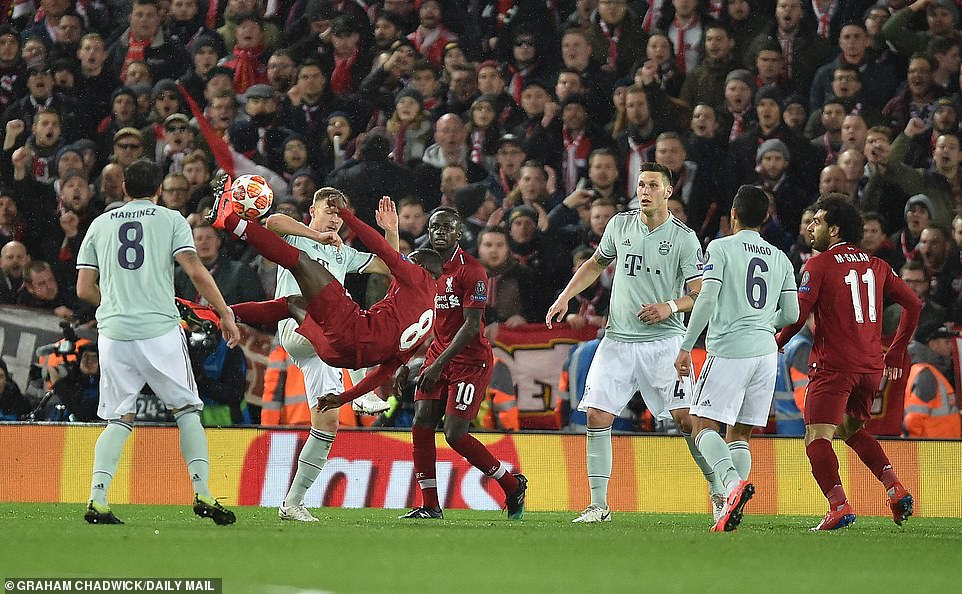 Naby Keita also made an attempt at the spectacular, as the Bayern defence and an expectant home crowd looked on

At a mid-point in the first-half Klopp turned to the crowd around him and made the universal gesture – in these parts, at least – for calm down. He may have been better served giving the same advice to his goalkeeper, Alisson. Three times in the first 17 minutes he was guilty of a less than composed clearance, and had Bayern been sharper to react they could have been ahead.

Alisson’s first clearance of the match was unconvincing to say the least, played straight to Kingsley Coman in the Munich midfield, although his response amounted to nothing, Soon after, there was a poor punch to clear a cross from former Arsenal man Serge Gnabry – one of those ex-Premier League players who turns up in an elite European starting line up, to the surprise of all – before a state of complete confusion between Alisson and Joel Matip should have let in Coman again. He was put through by Lewandowski but shot into the side-netting,

That was the story of the half, largely. Munich did not create much of their own, but looked dangerous when capitalising on Liverpool’s mistakes. That is what happened after 37 minutes when Trent Alexander-Arnold came haring out the back with the ball only to be calmly dispossessed by Thiago Alcantara as Munich quickly countered. This time it was Gnabry on the ball, his shot diverted round the far post by Alisson’s fingertips.

Before the game there was great confidence in the streets around Anfield, with locals predicting an emphatic victory – three, maybe four goal margins, were not uncommon estimates. By half-time, though, adjustments were being made.

Liverpool were the better team, but Munich were demonstrating that the experience of high end elite clubs in this competition count for a lot, too. Much had been made of their slow defenders, and that wasn’t wrong; but they are good defenders, defenders that have been around the block. Liverpool got near to goal on a number of occasions, but Munich repelled them. They made blocks, they got a foot in, a vital touch, a glancing header. When Liverpool did get beyond them, finishing let Klopp’s side down. 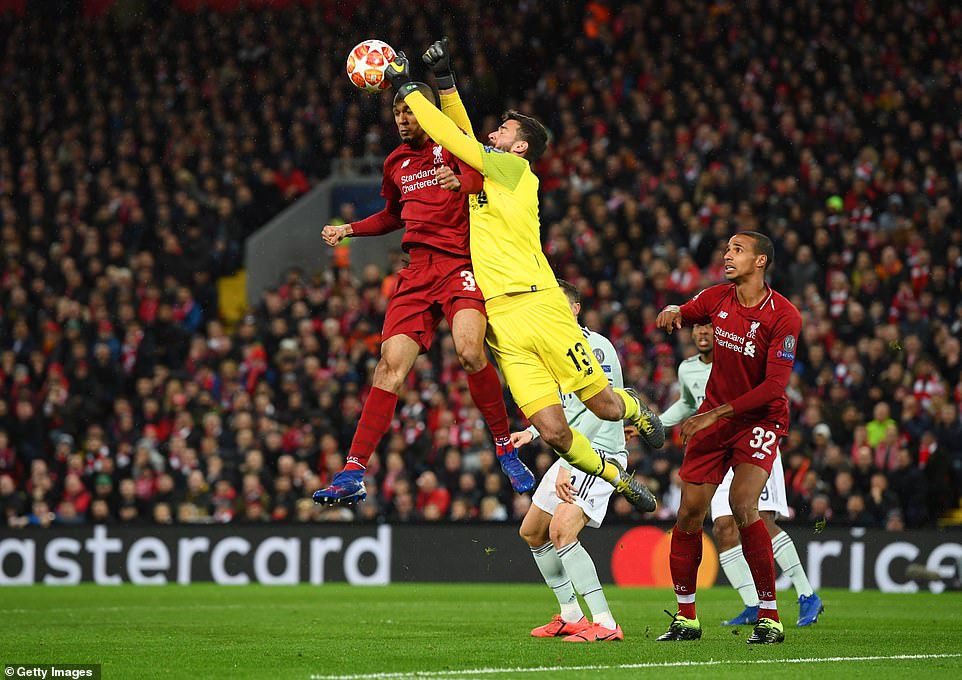 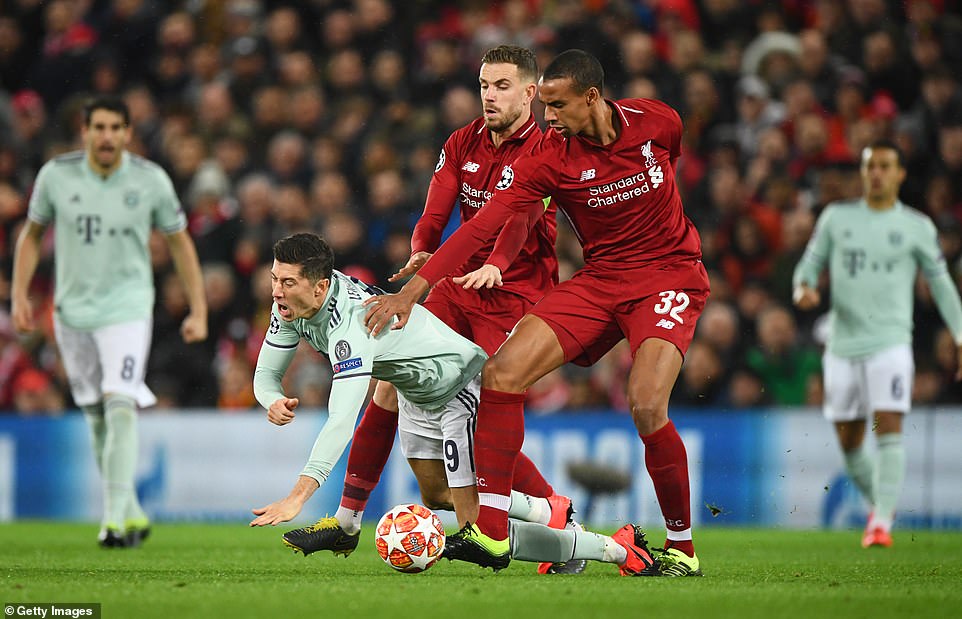 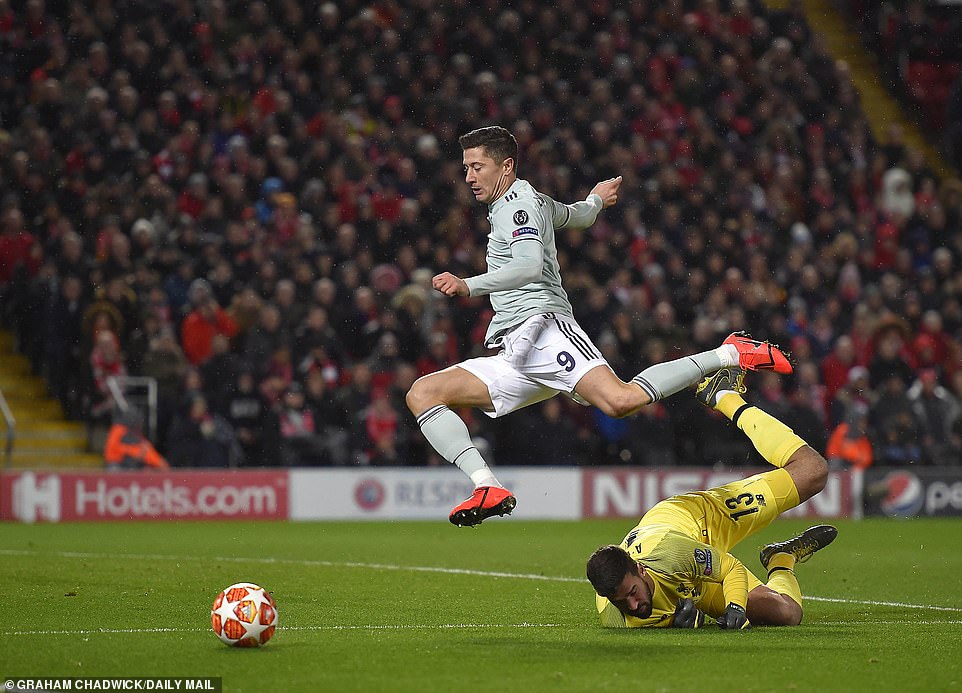 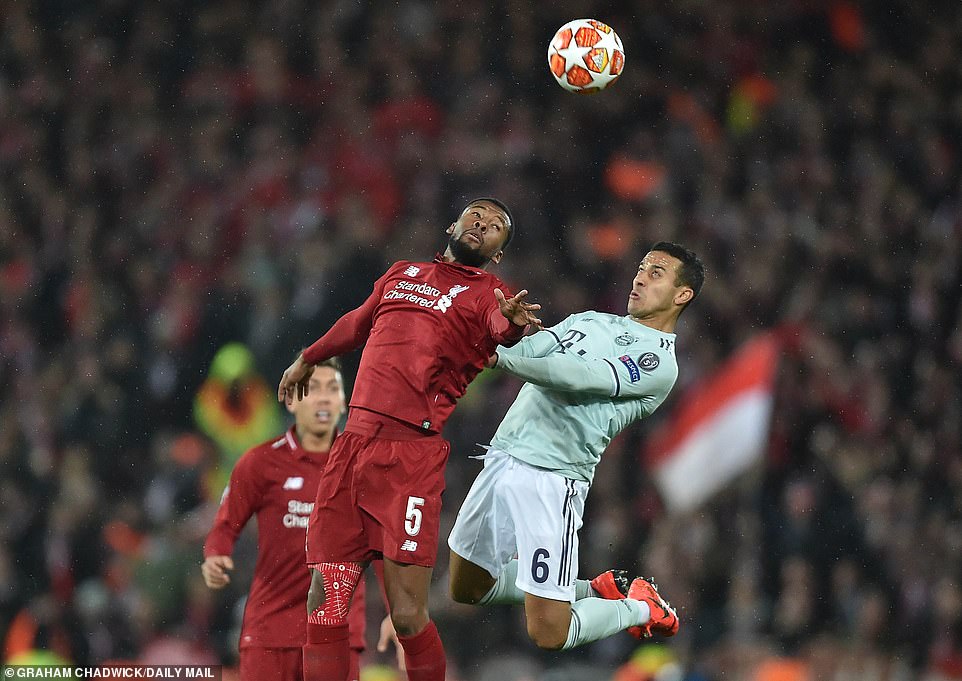 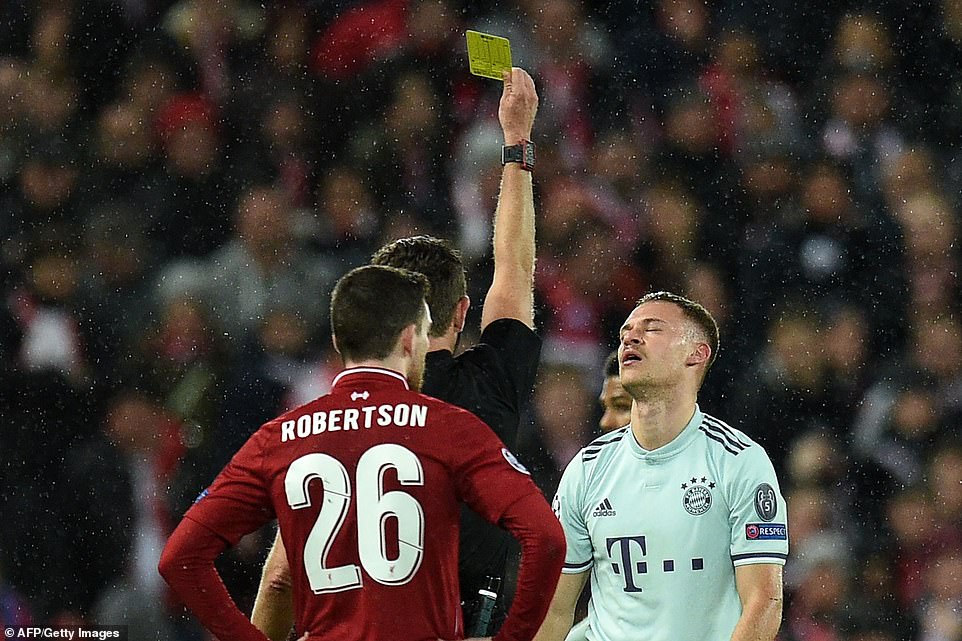 Joshua Kimmich picked up a yellow card after 27 minutes, which will keep the full back out of the second leg

Jordan Henderson, as so often happens on big European nights, was outstanding. He raises his game in matches like this, and so it was here. In the 12th minute, it was his neat through ball that put Mo Salah through, the striker getting a touch on the volley as the ball came over his shoulder, but not enough to defeat Manuel Neuer.

Naby Keita looked lively, too, and in the 17th minute Sadio Mane should have done better with his pass, shooting wide from a strong position. Might Liverpool have had a penalty after 33 minutes? Referee Gianluca Rocchi did not think so and as VAR is now in place for Champions League games, his team must have agreed.

Roberto Firmino, passed fit prior to kick-off found Keita whose shot was blocked by a desperate lunge from Niklas Sule. Replays showed it struck an arm, but in such close proximity to the shot it is hard to see how he could have avoided contact. The ball went loose to Mane in a fabulous position, but he made a poor show of his shot on the turn.

Keita had an effort deflected up high in the 38th minute and Mane had more time to take control it than the hurried overhead kick attempt that sent the ball wide. The same was true of Joel Matip, who should have done more to capitalise on a cross from Henderson after a lovely backheel from Salah.

It meant the best chance of the half fell to a Liverpool player – but at the wrong end, In the 13th minute, Gnabry crossed and Matip, in a flap about the nearby presence of Lewandowski, leathered the ball against the chest of his own goalkeeper. It was the save of the night; not that Alisson knew too much about it. 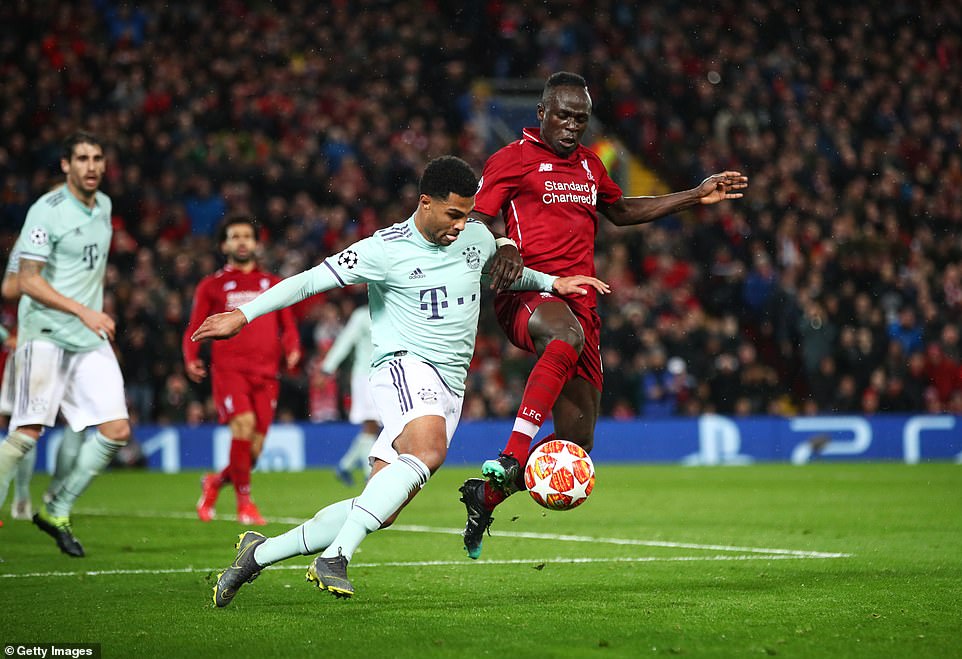 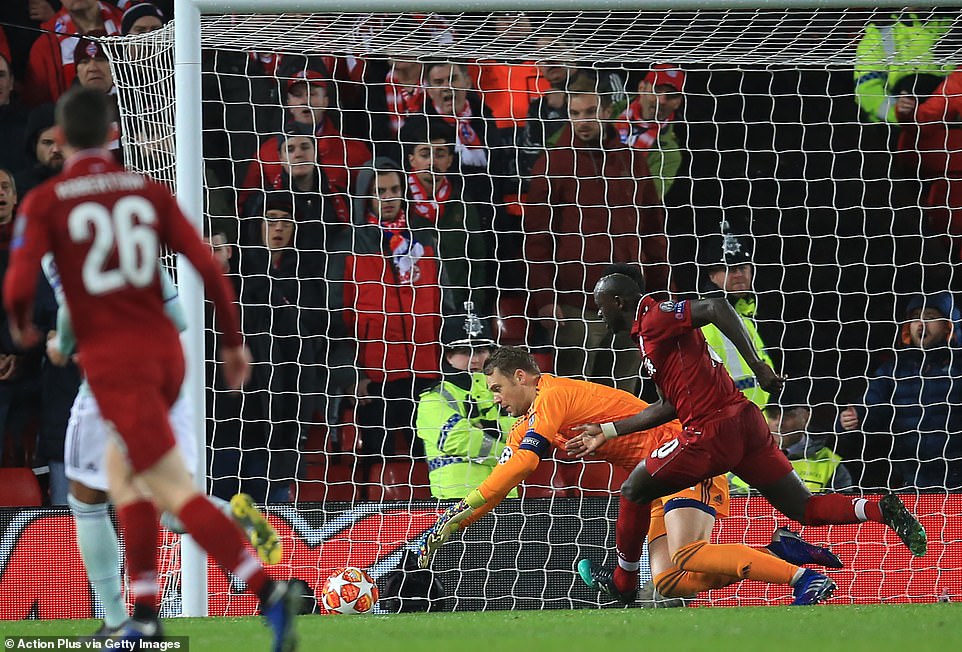 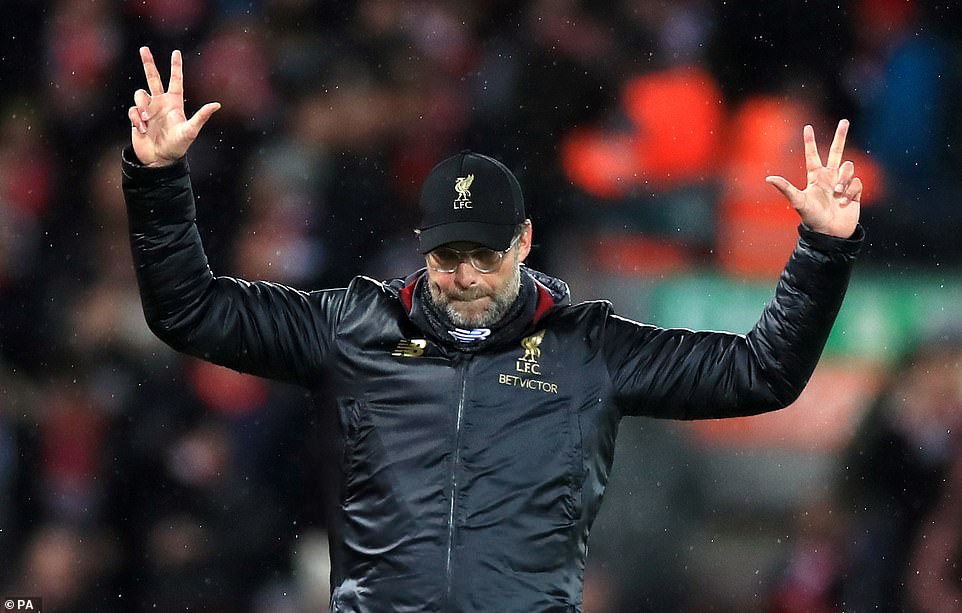 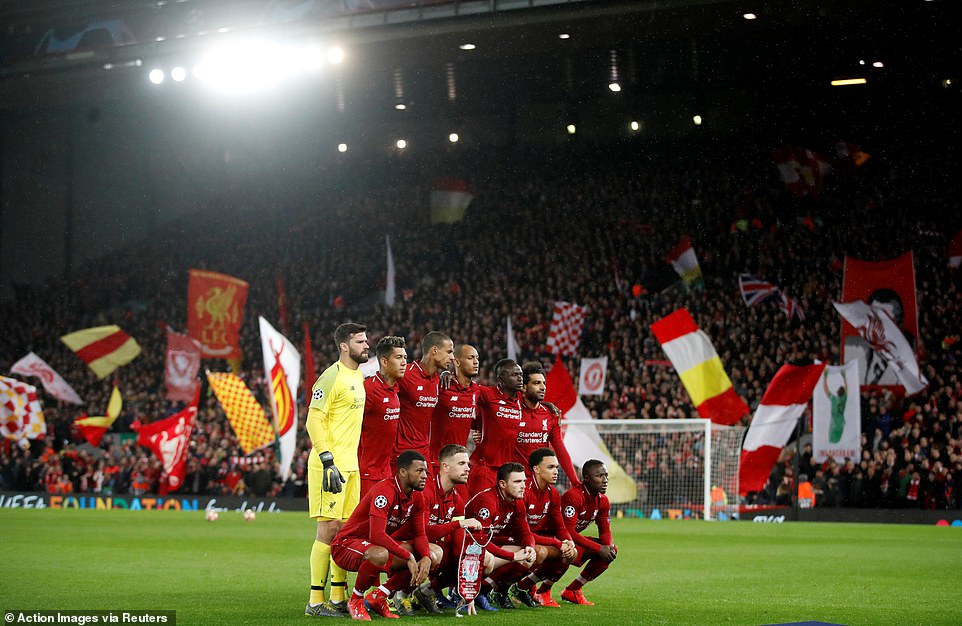 The Liverpool starting XI gather before kick-off, with the banners of the Kop visible in the background 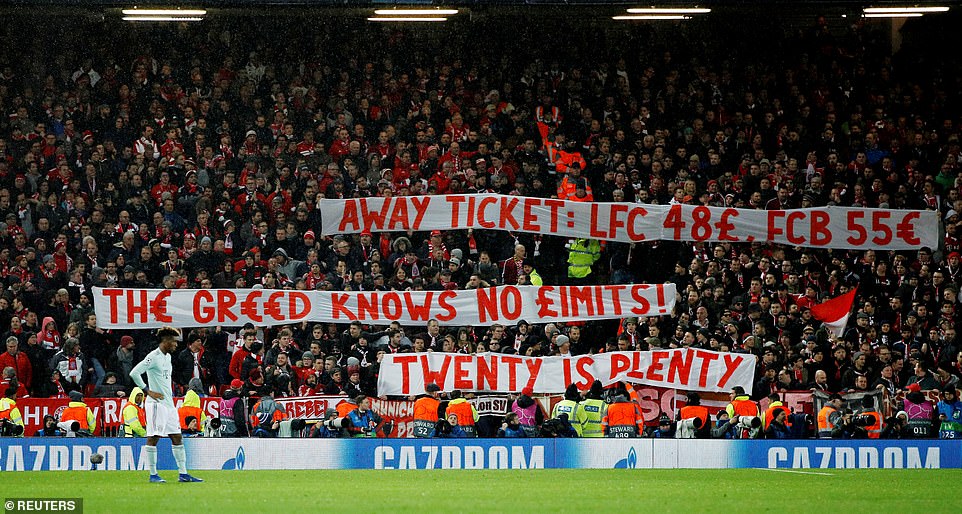 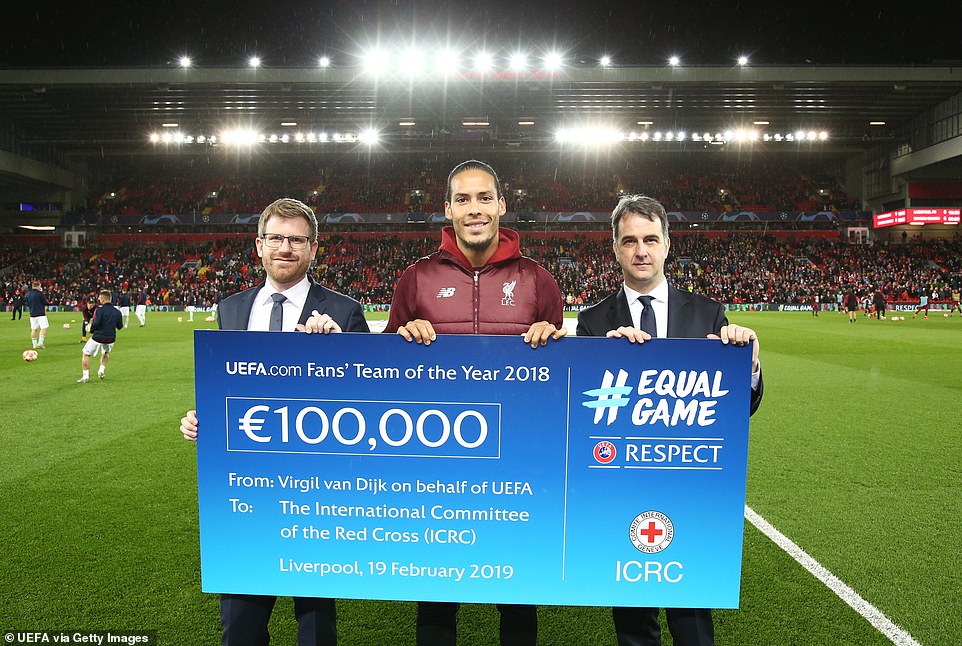 First choice centre back Virgil van Dijk was suspended for the game, and only got on the pitch for a presentation