Game by game, Alex Oxlade-Chamberlain continues to prove his value to Liverpool and if any player from this marginally under-strength side has made a case for sneaking in to Sunday’s team against Manchester City it is surely him.

Oxlade-Chamberlain is still being managed sensibly by Liverpool manager Jurgen Klopp after a serious knee injury. But the 26-year-old is consistently impressive once more these days and here he scored the winning goal and contributed the night’s most impressive overall performance.

This was a strange game. Liverpool scored early through Georginio Wijnaldum and dominated possession and chances. But a header from Genk’s Ally Mbwana Samatta towards the end of the opening period drew the Belgian’s level and after Oxlade-Chamberlain scored beautifully in the 53rd minute, they recovered to briefly trouble Liverpool again towards the end of the night. 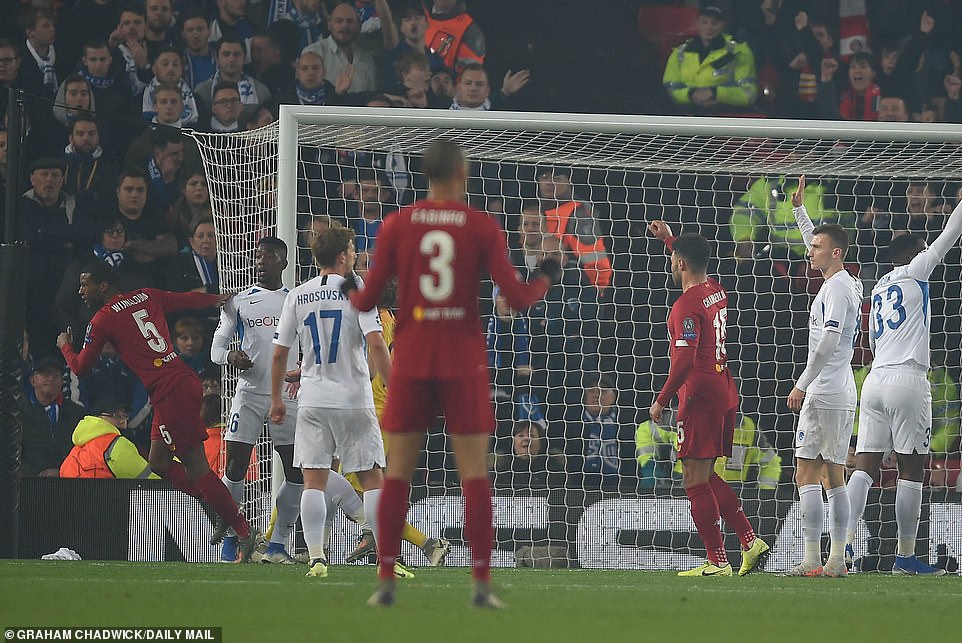 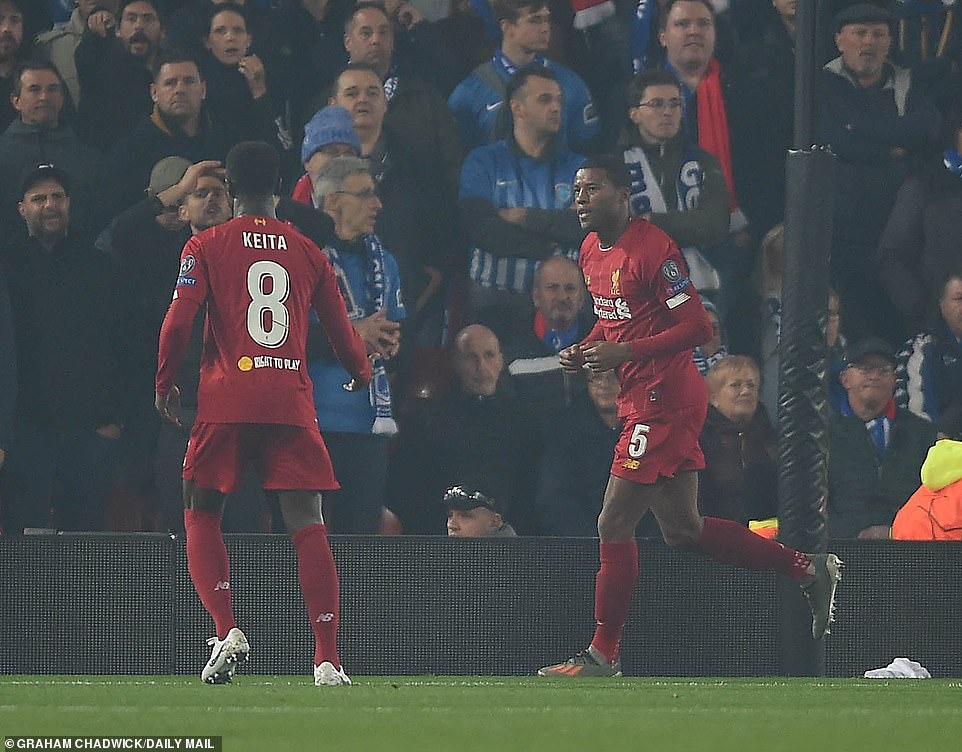 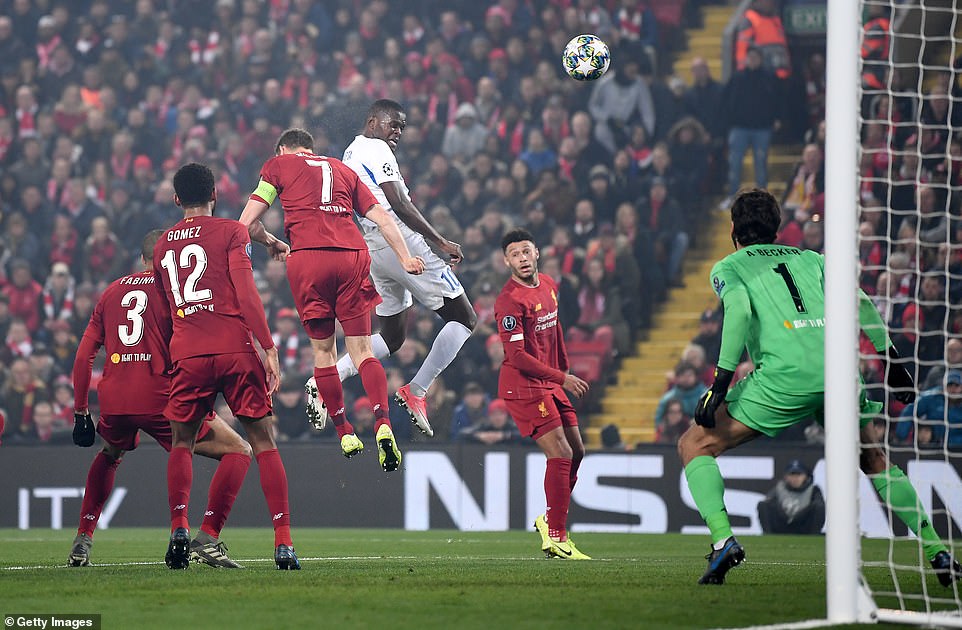 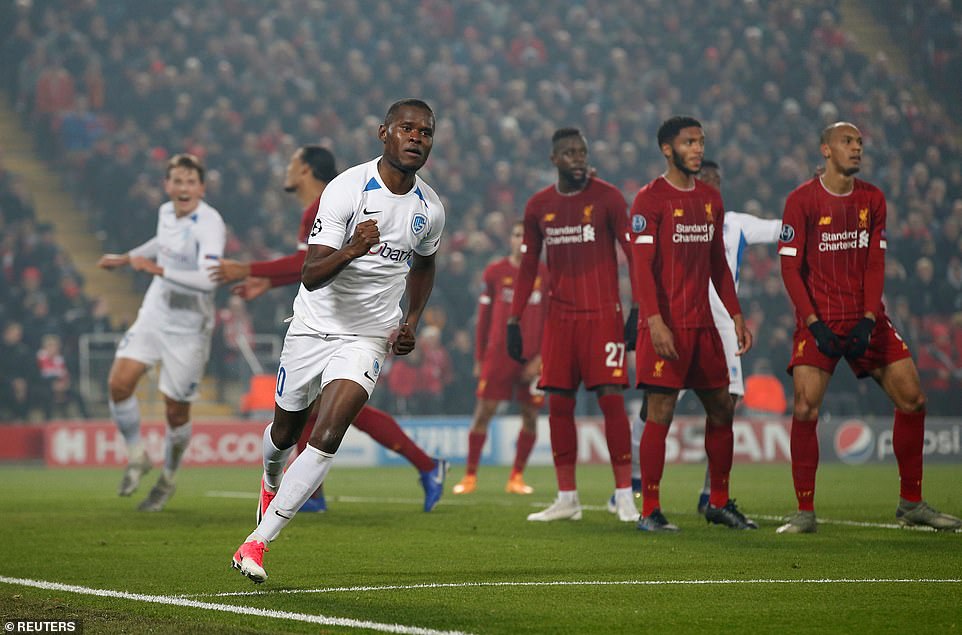 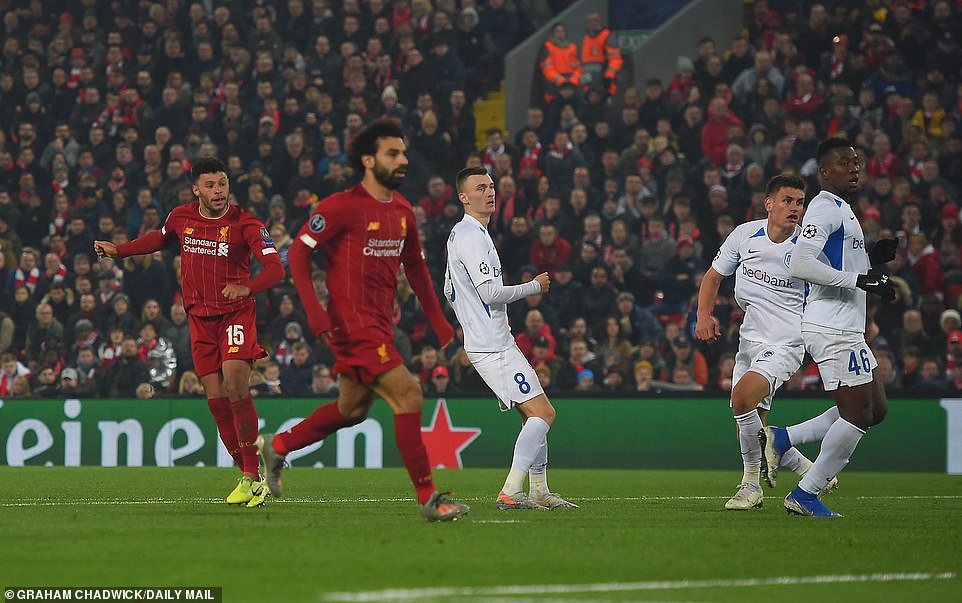 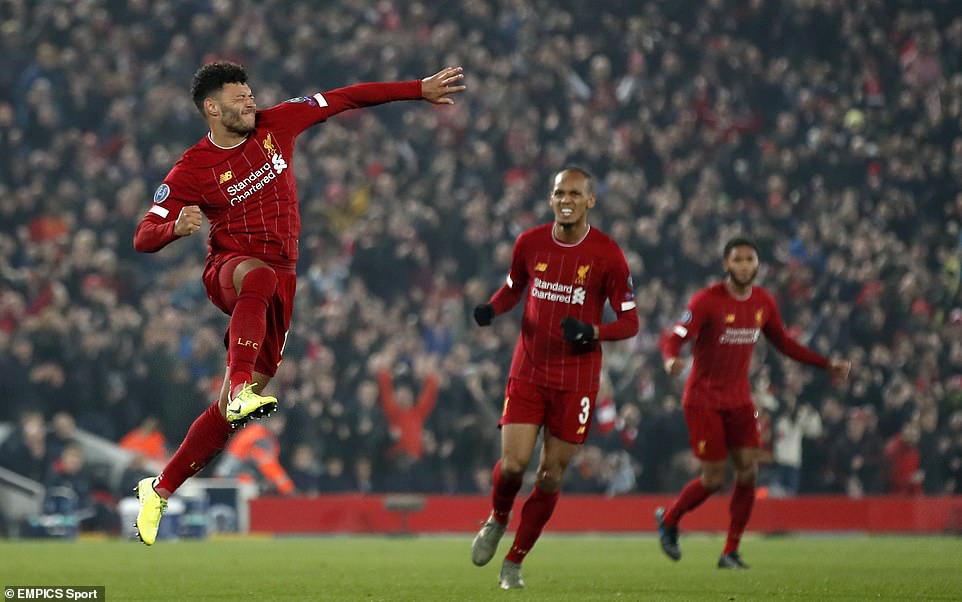 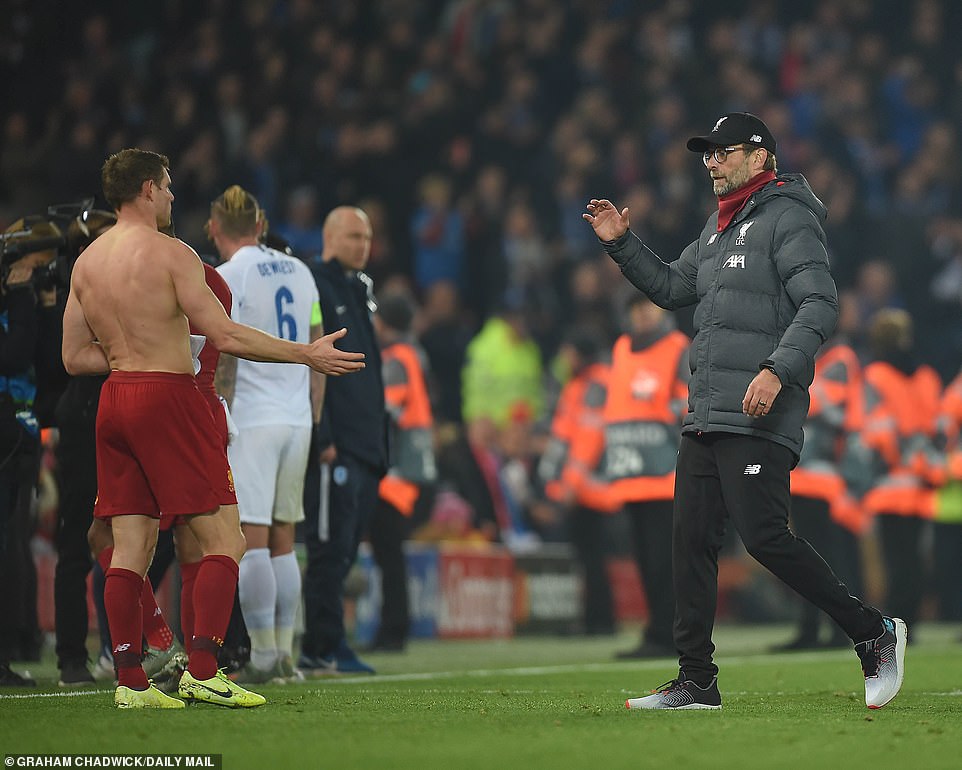 Man of the Match: Alex Oxlade-Chamberlain

Ultimately, Liverpool won and stand top of their Champions League group. They go in to Sunday’s game with City in decent form, even if they have not now kept a clean sheet in any competition for eight games.

And in Oxlade-Chamberlain they have a player who does not look as though he can be held back much longer.

With confidence in his body restored, the former Arsenal player is in good form now, troubling teams with his runs from deep and his ability to shoot off either foot.

When Klopp makes his selections for what could be a definitive afternoon on Merseyside, Oxlade-Chamberlain will surely be at the forefront of his thoughts.

Liverpool’s first half dominance was such that goalkeeper Alisson hardly touched the ball. When the Brazilian caught a low cross ten minutes before the interval, it represented his most serious work of the night so far. The home team’s football was neat and progressive if not exactly scintillating.

Certainly it was more than good enough to allow them to control the game and had Mo Salah been slightly more accurate with a low cross shot after controlling a James Milner pass shortly before the end of the first period then Liverpool would all but have secured the result. 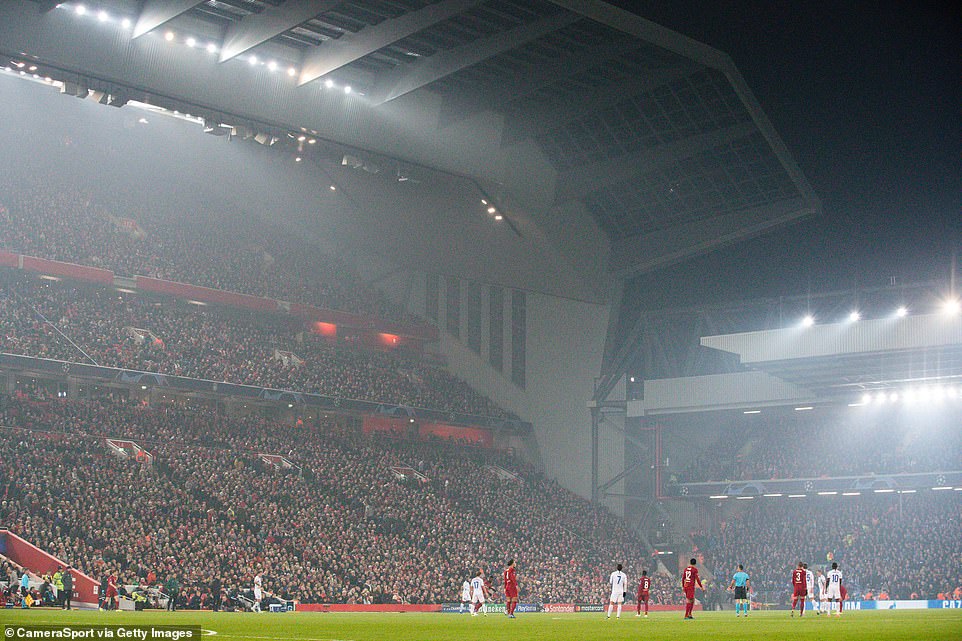 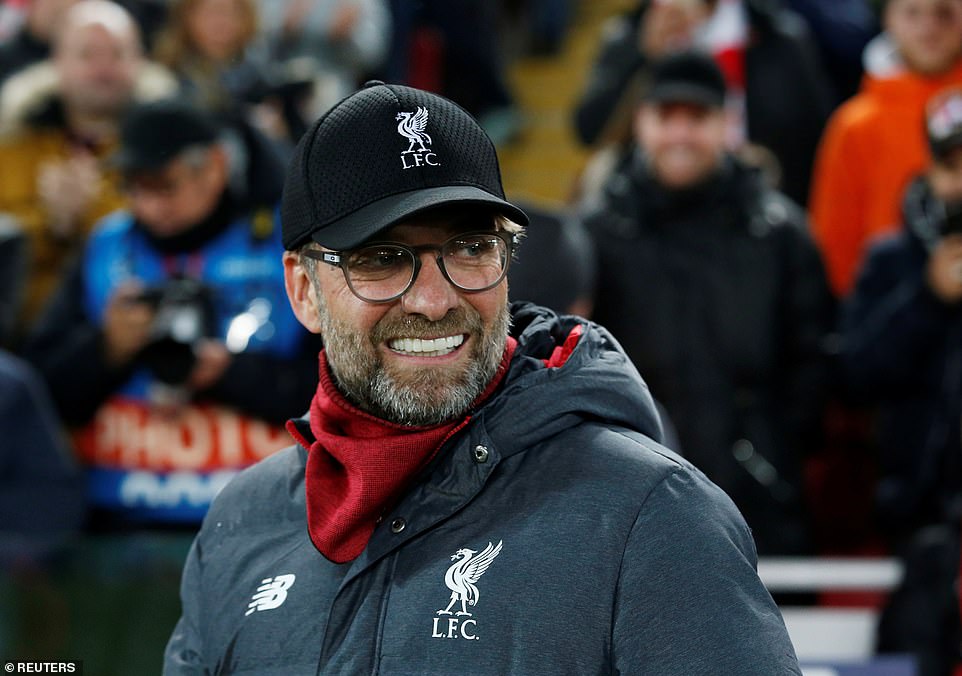 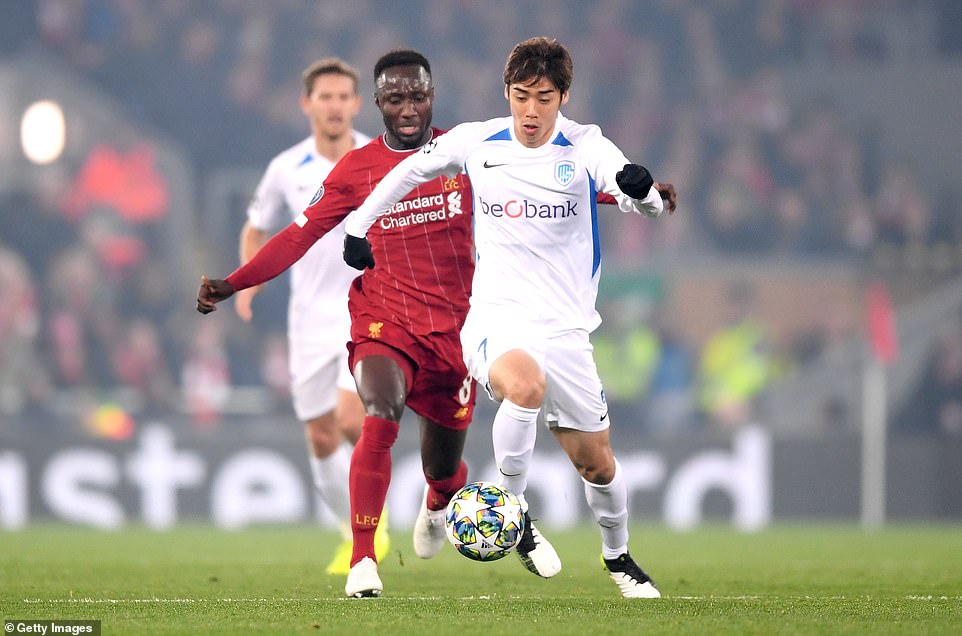 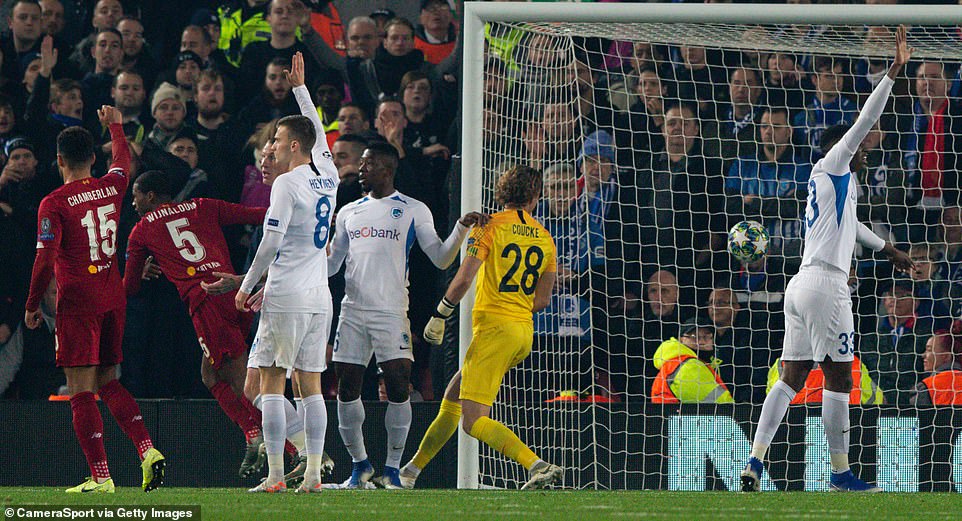 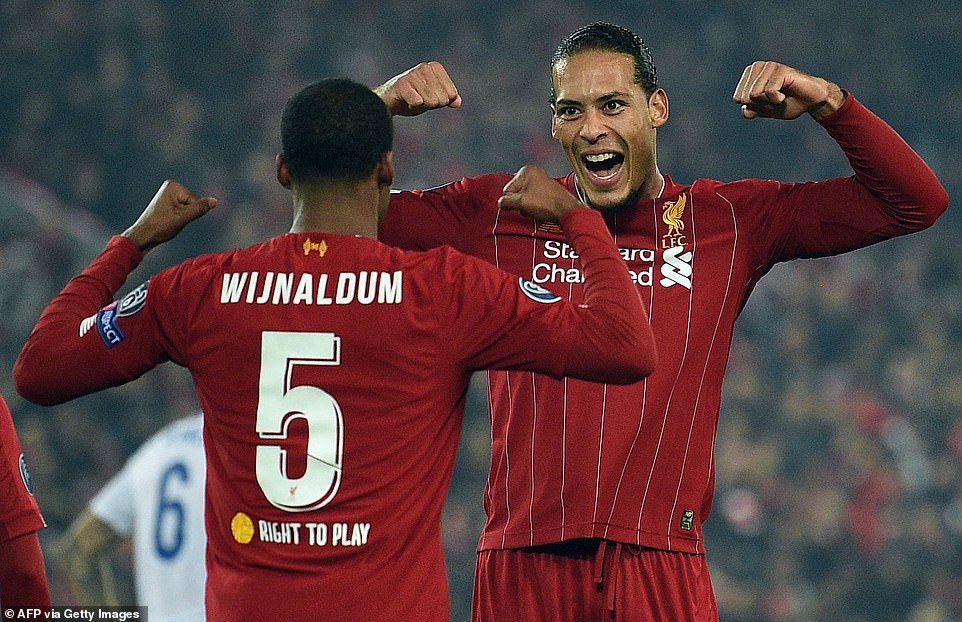 But football can be a strange game and that’s especially the case if you don’t take your chances. Liverpool did not take theirs in the wake of Wijnaldum’s goal in the 14th minute and were caught by a sucker punch as they were preparing for the half-time whistle.

A rare Genk attack down the right saw them win a corner and when it was delivered from the far side to the near post Samatta eased ahead of James Milner to thump a header in to the goal at the Kop end.

On the touchline, Klopp stood and smiled in that occasionally bemused way of his. Out of nothing, his team were only level and as such had to start their hard work all over again.

Prior to that, everything had come easily to them. Maybe that was part of the problem. Liverpool had enjoyed control of both possession and territory and when Wijnaldum scored it seemed unlikely it would be his team’s only goal of the first half.

Its creation was typical of much of what Liverpool did, easing possession down the left flank before moving the ball inside to make a chance. 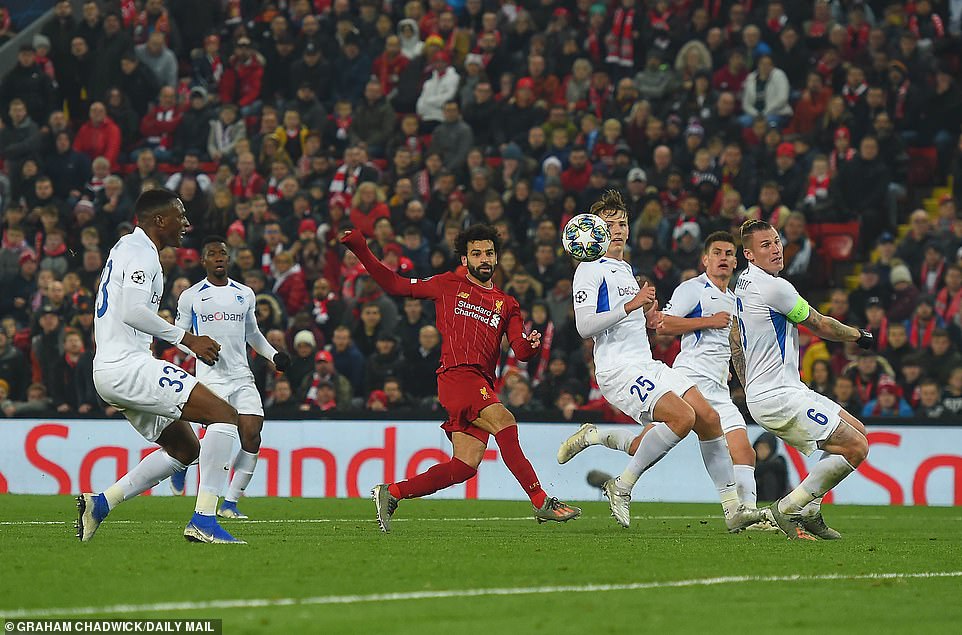 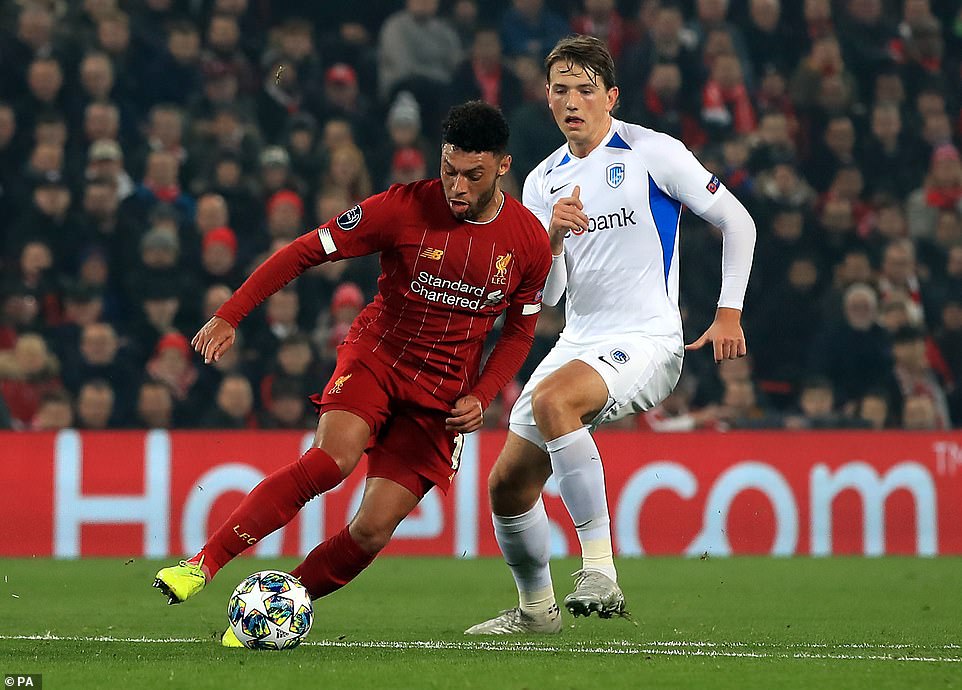 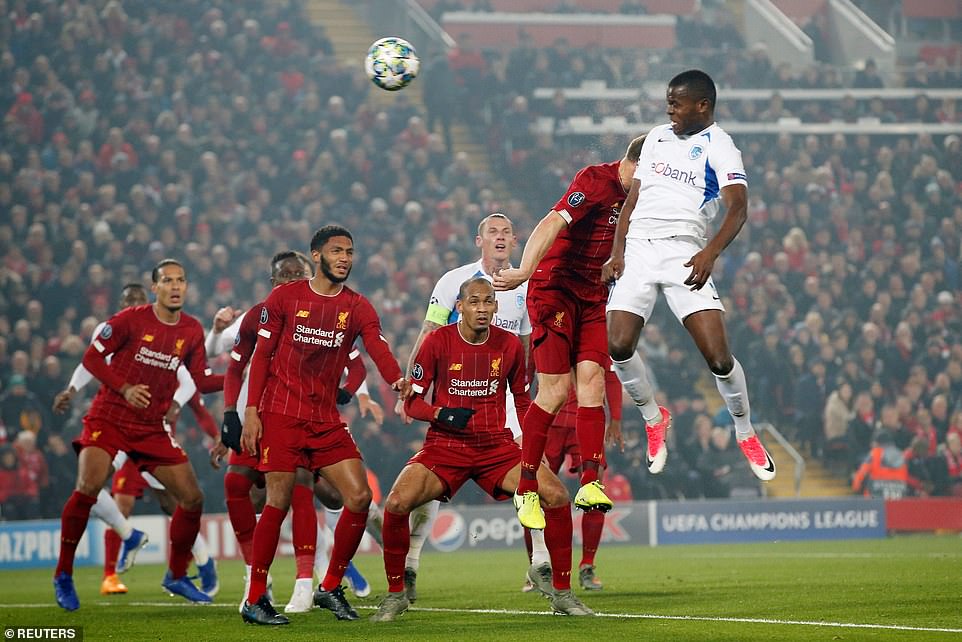 Samatta sprinted across the near post, beat Milner to the ball and powered a header past a helpless Alisson into the net 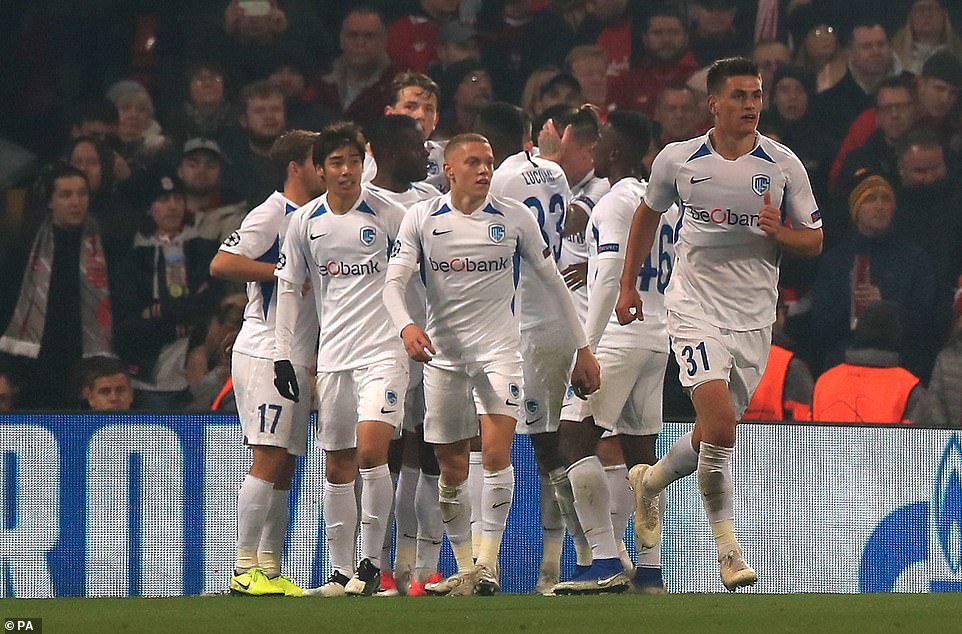 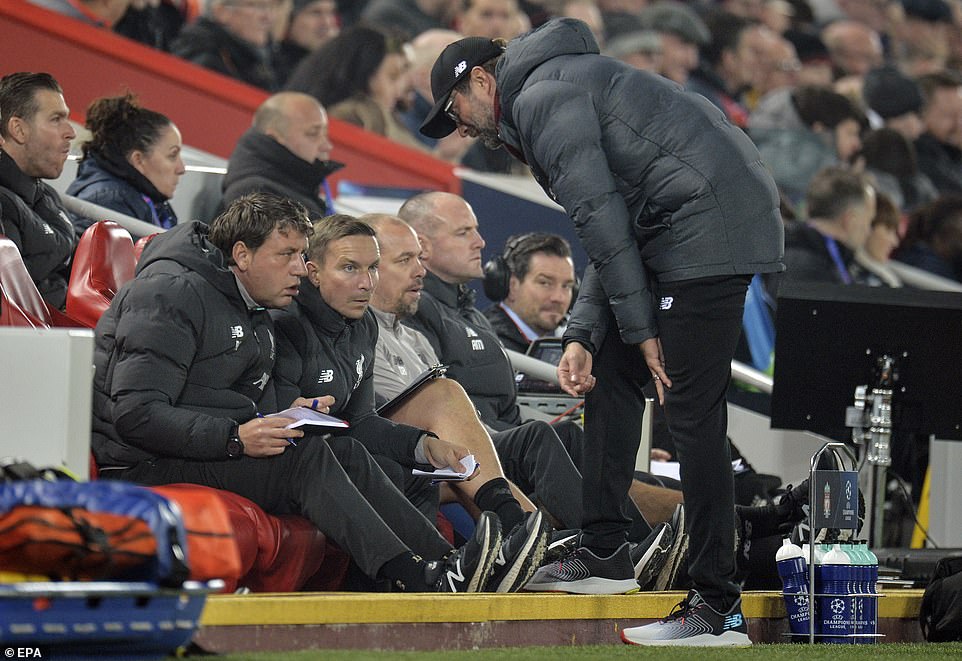 It was Milner and Divock Origi who created the opening for the goal, the Belgian drawing players towards him before releasing Liverpool’s captain for the night to the byline. When the low cross arrived, the ball bounced up off defender and captain Sebastien Dewaest and dropped at Wijnaldum’s feet for the Dutchman to flick it in to the goal on the half turn.

Milner was a pest from early on, surging forwards from left-back without much resistance from the Belgians. Inside him the likes of Alex Oxlade-Chamberlain and Naby Keita were similarly purposeful and at times they looked as though they may over run their opponents.

Milner drew a save from Gaetan Coucke from 25 yards shortly after the first goal and then Keita moved forwards to be denied twice in the space of 15 seconds. Oxlade-Chamberlain was then foiled by a desperate block from Carlos Cuesta after turning beautifully on the edge of the area.

In the wake of the Genk equaliser, Liverpool chances came and went almost immediately. But Salah and Origi both missed the target but Oxlade-Chamberlain had looked the most likely all night and he edged Klopp’s team ahead again in the 53rd minute. 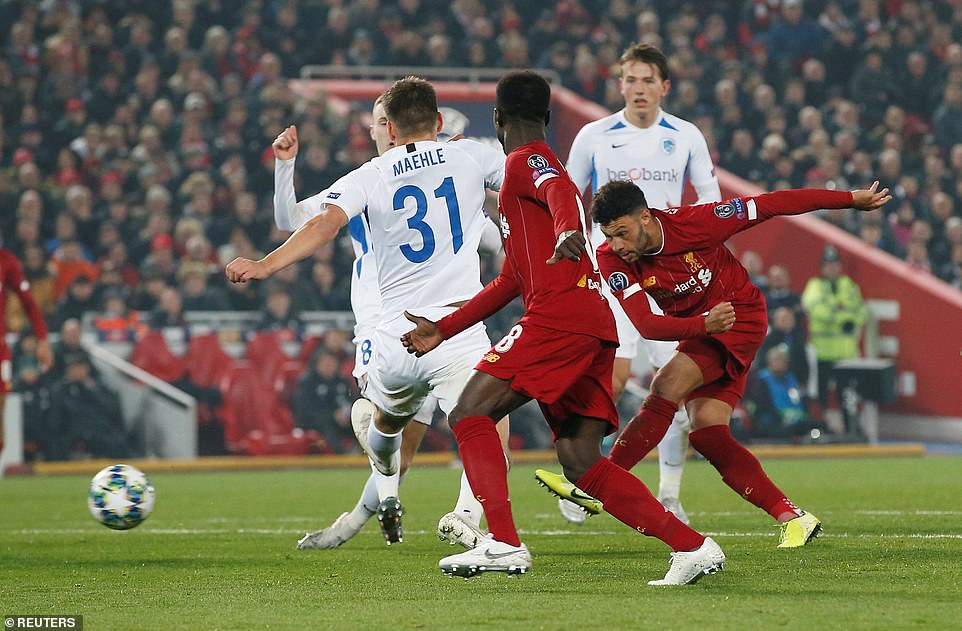 Oxlade-Chamberlain received the ball off Salah, produced a delightful turn and then powered an effort back across goal 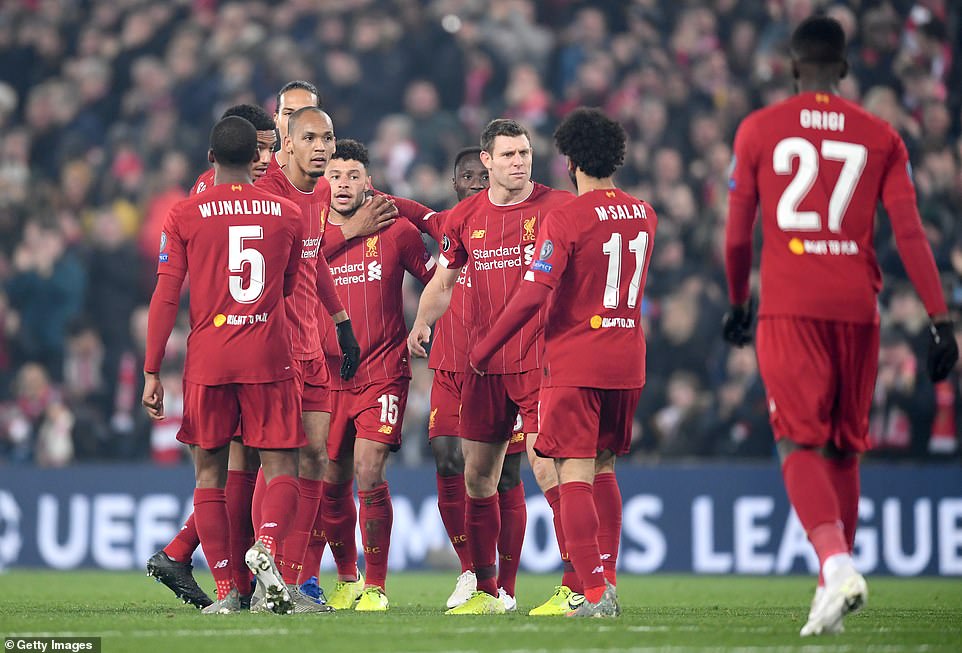 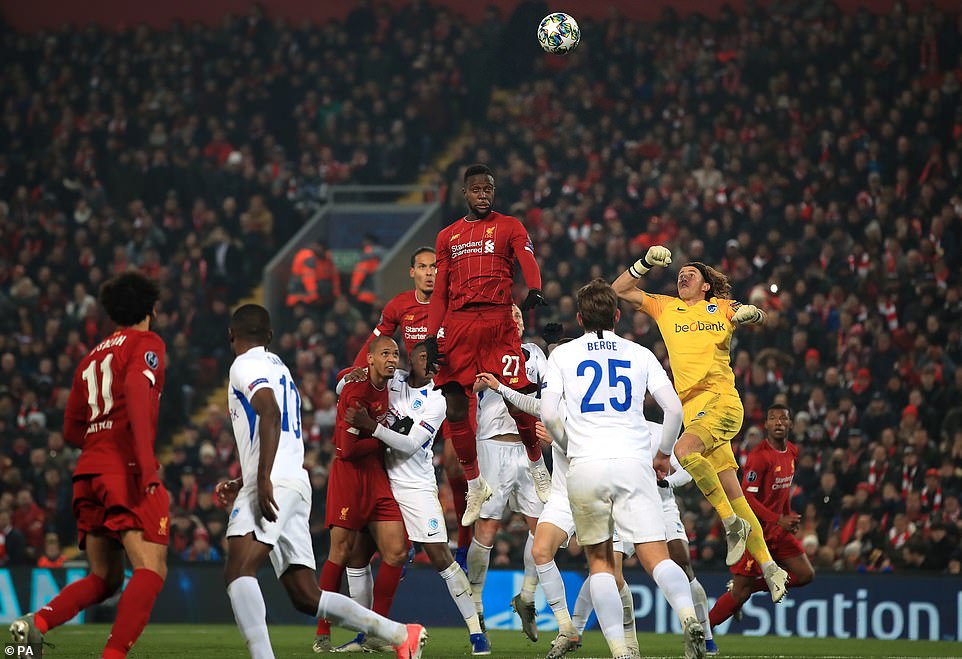 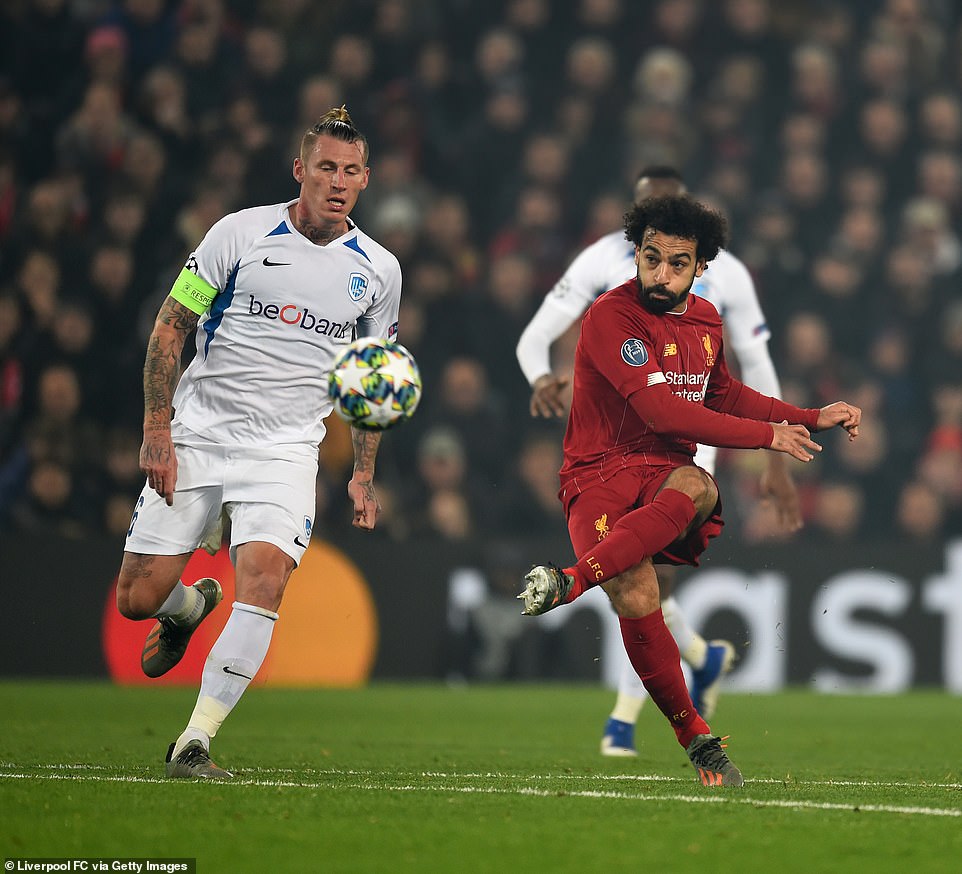 Salah controlled a sideways pass from Fabinho on the edge of the penalty area and when he moved the ball on to Oxlade-Chamberlain, he turned well to screw a low shot to the goalkeeper’s left from 18 yards.

It was a lovely goal and Salah’s contribution was typical of his work all night. Salah can be greedy but he wasn’t here and it wasn’t long before he setting up Wijnaldum for a shot that was charged down and Origi for one that was also blocked.

Once again Genk were struggling for possession and Salah should have wrapped the game up when he rolled Dewaest on the edge of the area only to shoot weakly at the goalkeeper with his left foot.

With twenty minutes to go, Liverpool’s only danger was the slender nature of their lead. They had been vastly superior all night but that was not reflected on the scoreboard.