For Jurgen Klopp, a riposte after days of criticism so strong that an impassioned defence of his reign was deemed necessary in the hours before lame Huddersfield arrived on Saturday.

Liverpool thoroughly dismantled their manager’s best friend on an afternoon David Wagner’s side barely ventured beyond halfway and did not fancy attacking much. The perfect opponent in many respects.

It certainly will not banish the painful nature of that battering at Wembley last week and Klopp admitted that. Nor will only a second Premier League win since August convince that they have truly turned a corner, or ready to challenge Manchester for honours. 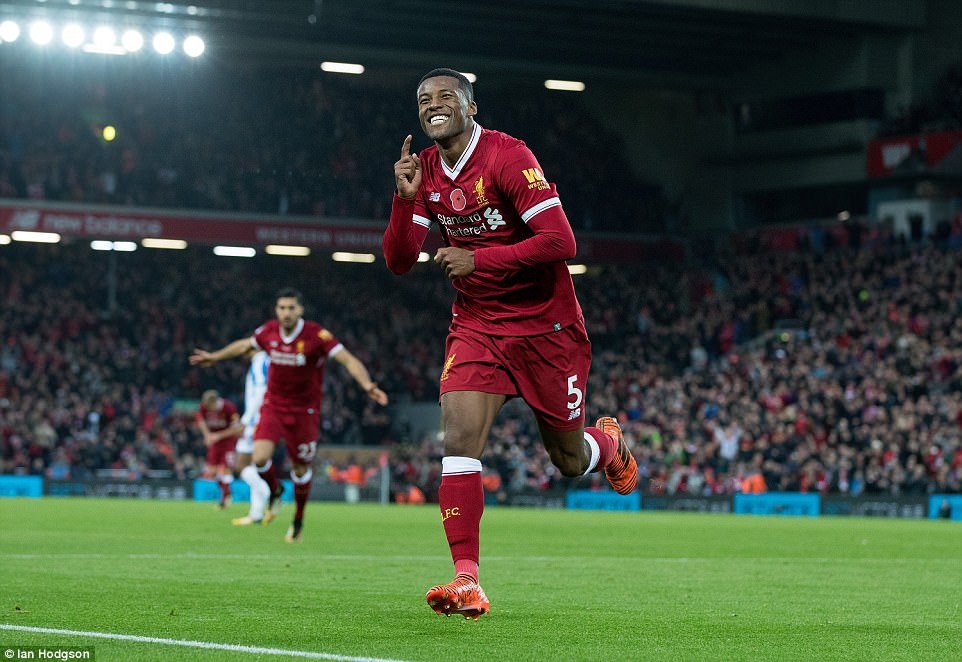 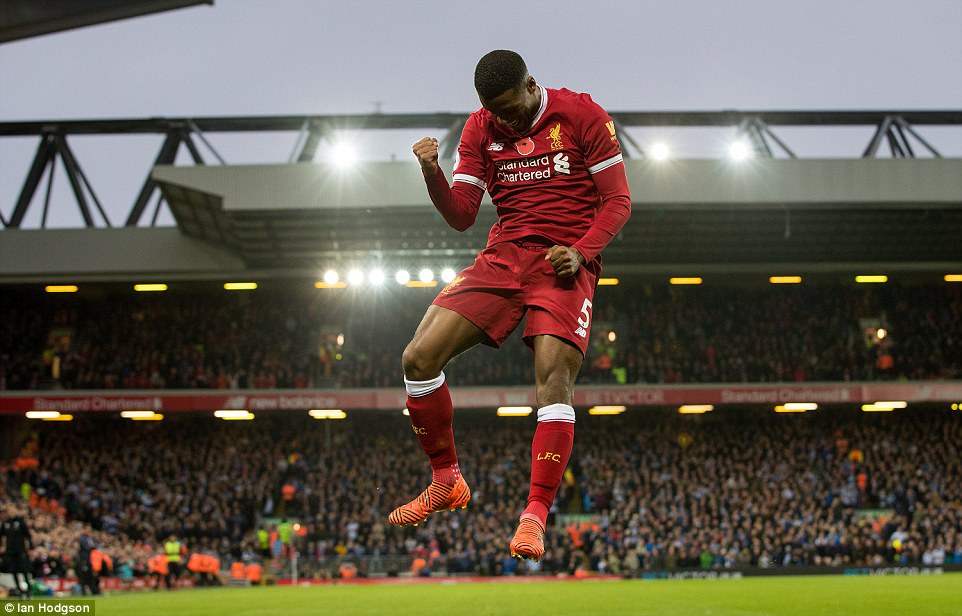 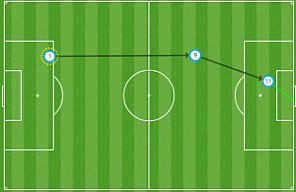 How Daniel Sturridge broke the deadlock for Liverpool at Anfield.CLICK HERE to find out more from MATCH ZONE.

Yet it does offer indication of an ability to bounce back. For the moment, that will have to do. A clean sheet too, Liverpool’s fourth in five home league games this season.

Not that Simon Mignolet was ever threatened. A welcome leisurely day for the goalkeeper after his part in the Tottenham debacle.

Klopp knew what was coming. Wagner sent a text message immediately after last week’s humbling of Manchester United with “we parked the bus”, signed off with a smiling emoji.

Same again on Merseyside but with disastrous consequences. Having kept Liverpool at a length before the break, Daniel Sturridge, Roberto Firmino and Georgino Wijnaldum later settled this with ease.

‘People didn’t like the first half too much, I know. I could hear it,’ Klopp said. ‘We didn’t have the best week. We take the situation really seriously. We cannot ignore Tottenham, you have to deal with it.

‘We were a little bit stiff. We had too many players behind the ball. It wasn’t too difficult to fix at half-time.’

That Wagner and his assistant, Christoph Bhuler, both clenched fists in approval at midfield pressure forcing Ragnar Klavan – in after Dejan Lovren hobbled out of the warm-up – into misplacing a pass out for a throw-in gives away just how Huddersfield approached their first trip here since 1971. 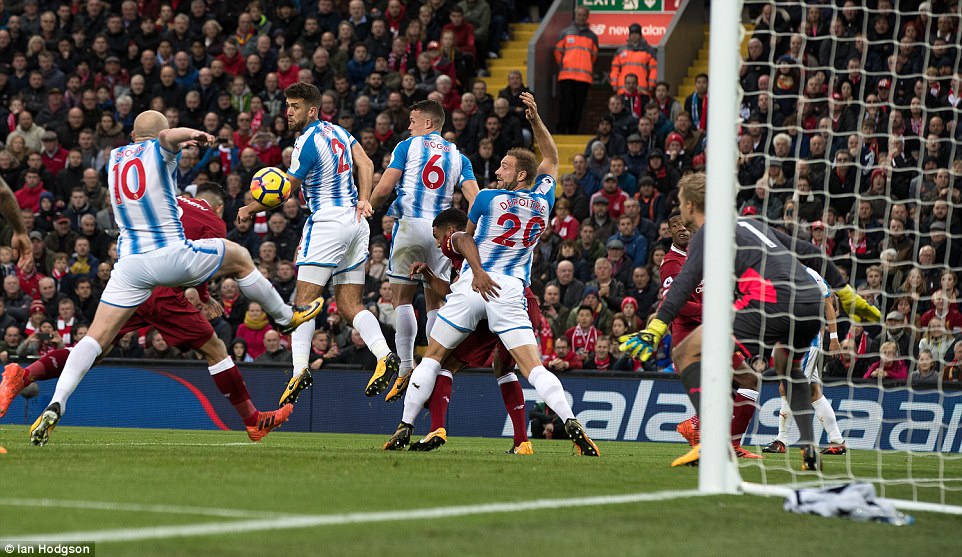 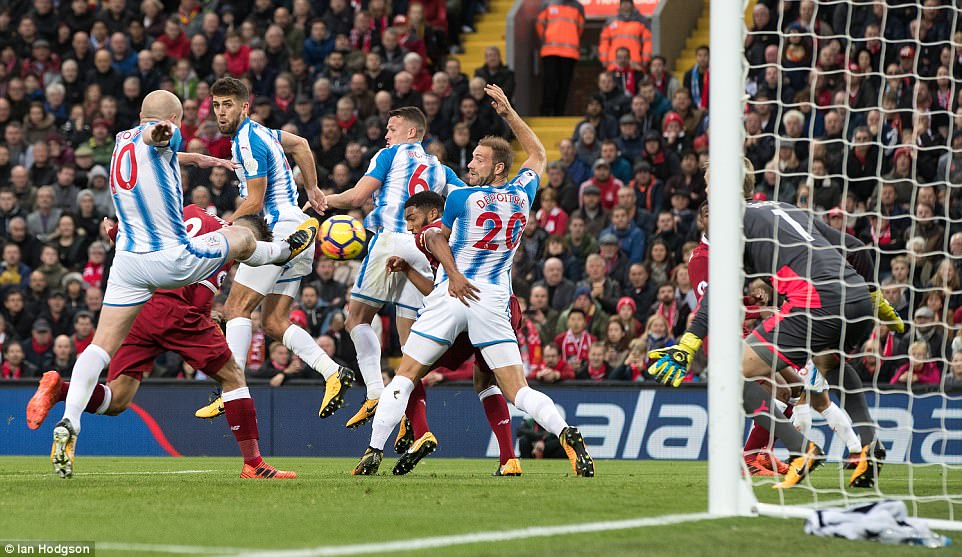 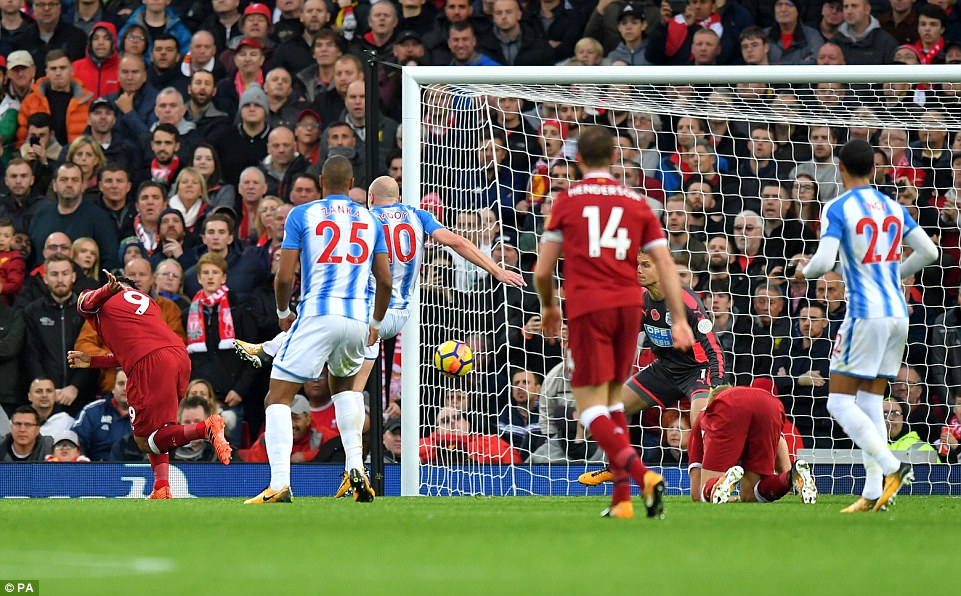 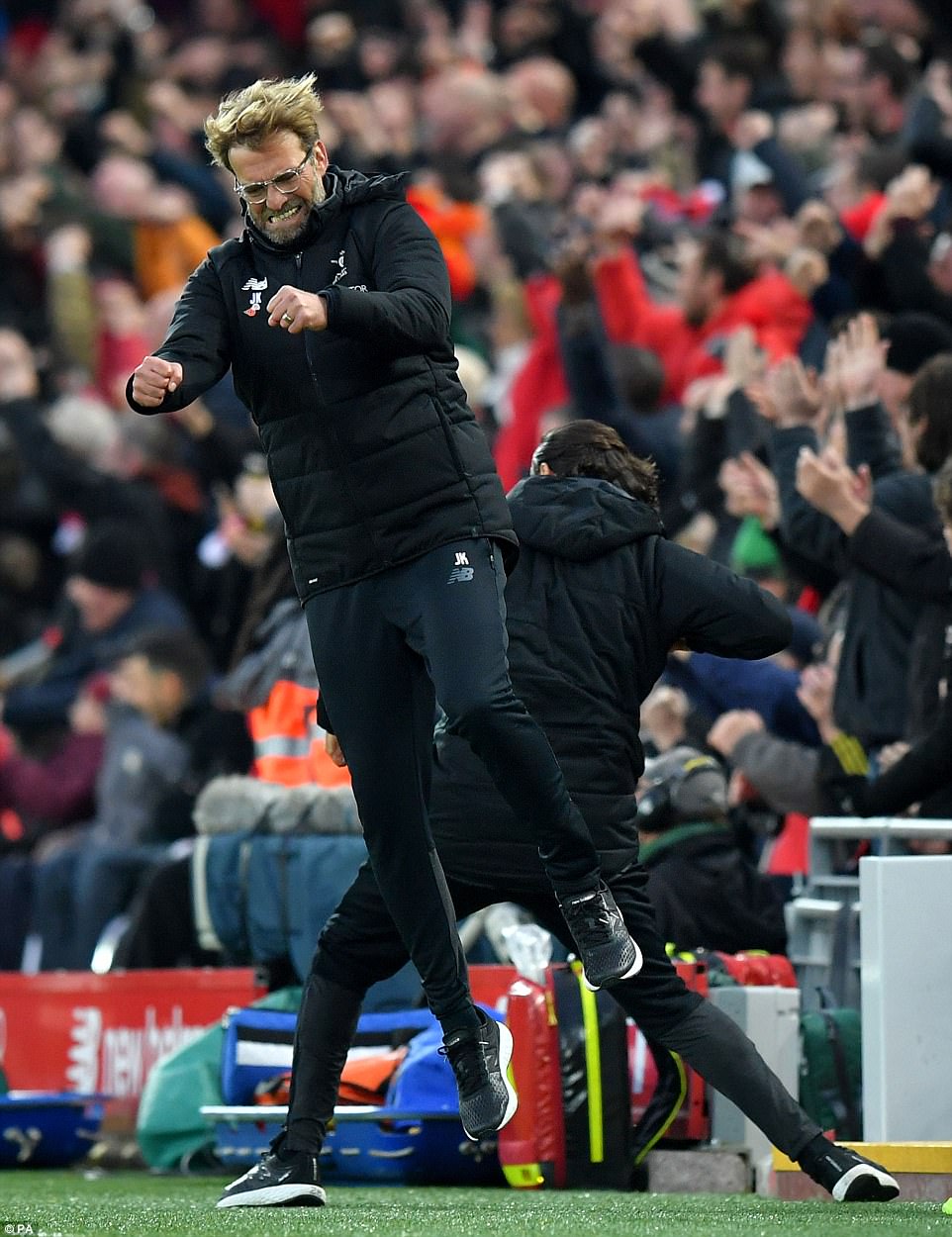 The strike meant everything to Jurgen Klopp, who bounded down the touchline in animated celebration

Goals have been celebrated with less vigour this season but their day began unravelling four minutes before the break.

A long, hopeful cross was punted into the away box. All eyes were on the back post but Kevin Friend’s were fixed on Tommy Smith, pulling at Firmino’s shirt. Huddersfield were aghast, Wagner too, but Friend was correct.

Sturridge and others quarrelled over who would take it. Mohamed Salah won the argument, struck the penalty true, but could not beat Jonas Lossl down to the goalkeeper’s left. Jordan Henderson thrashed the rebound wide via a post.

Penalties are somewhat of an issue for Klopp, Liverpool having missed three at Anfield this calendar year, but Wagner – arms folded, wearing a grimace – looked a man who knew pain was on its way.

Only five second-half minutes passed before they were deservedly behind. Alberto Moreno’s clipped pass split Smith and Mathias Jorgensen, the right back misdirecting a header into Sturridge’s path. Lossl raced out but could not stop Sturridge’s dink, his 100th goal in club football. 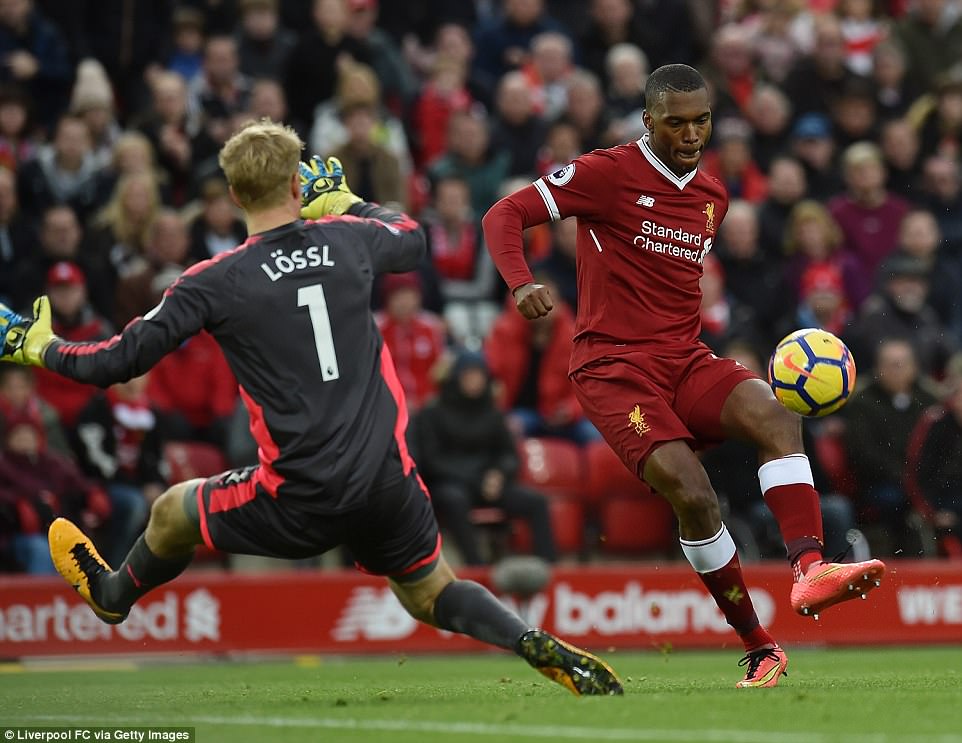 Thrown into the line-up following the absence of Philippe Coutinho, Sturridge made the most of his chance with a goal 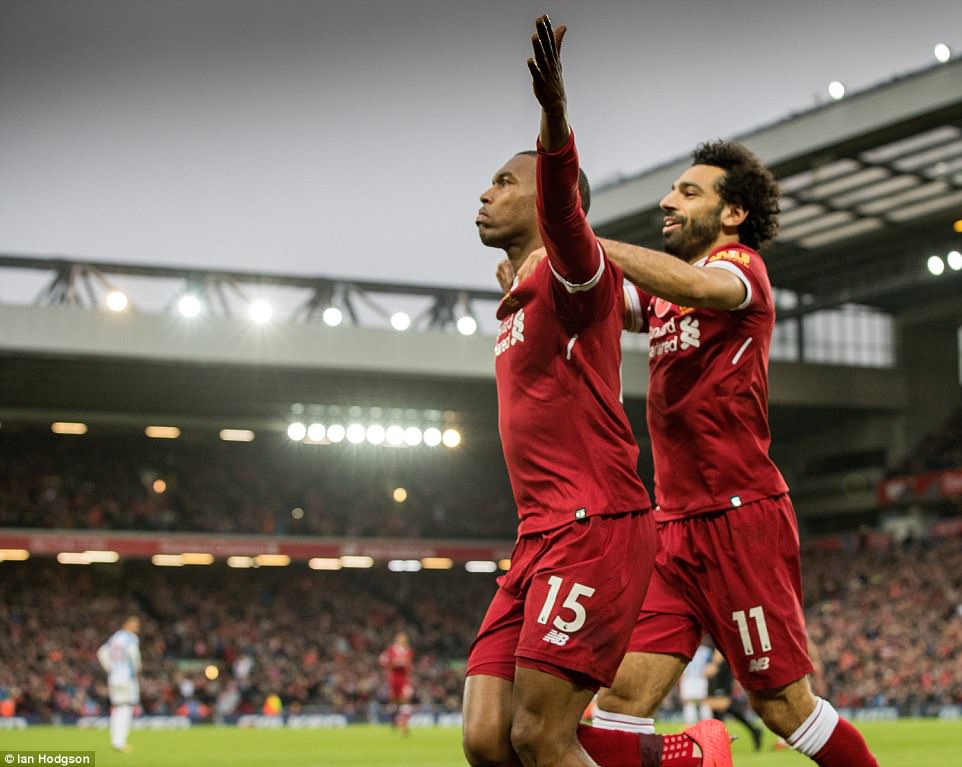 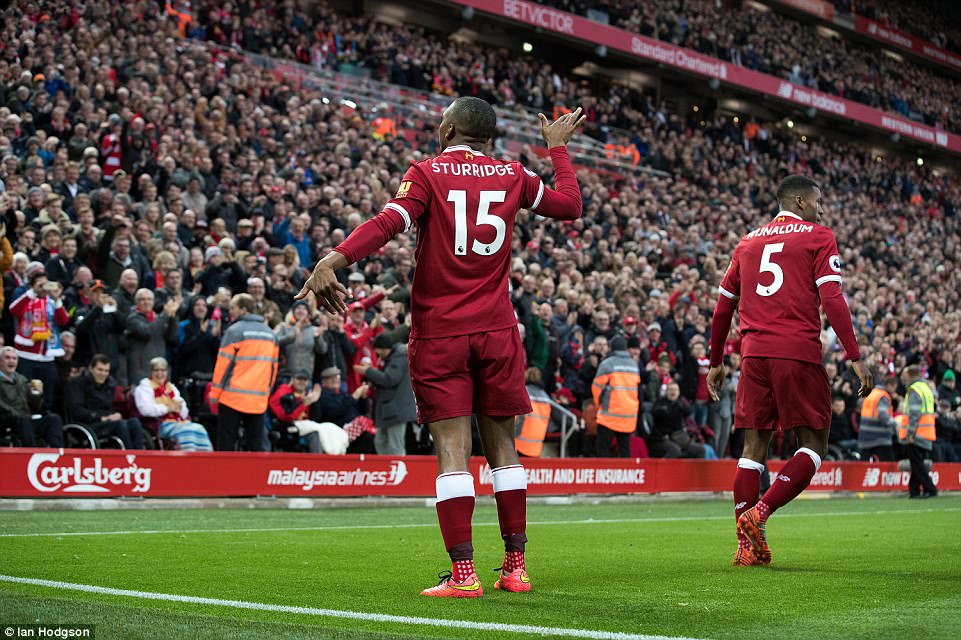 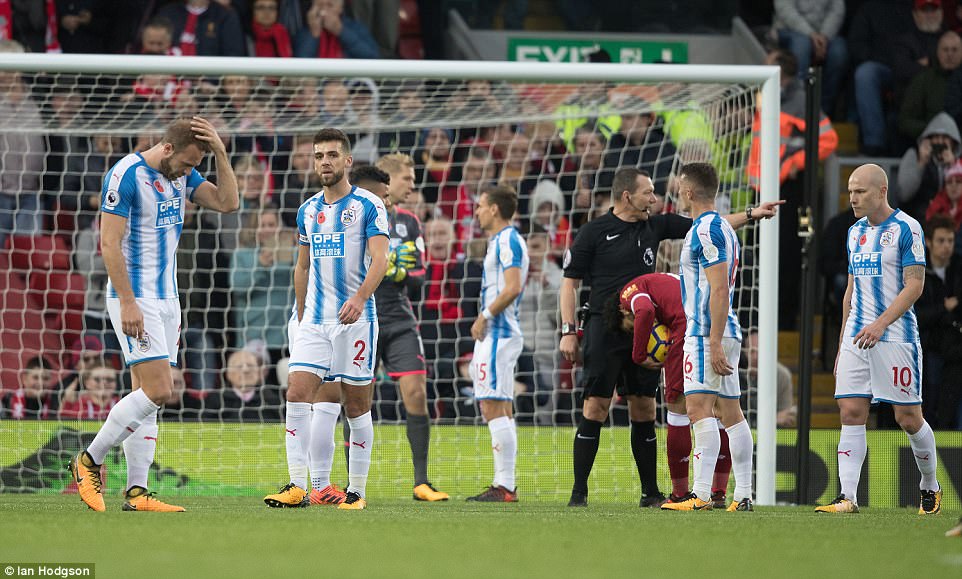 Earlier, Huddersfield had been left incensed after a penalty was given following a pull on the shirt of Firmino 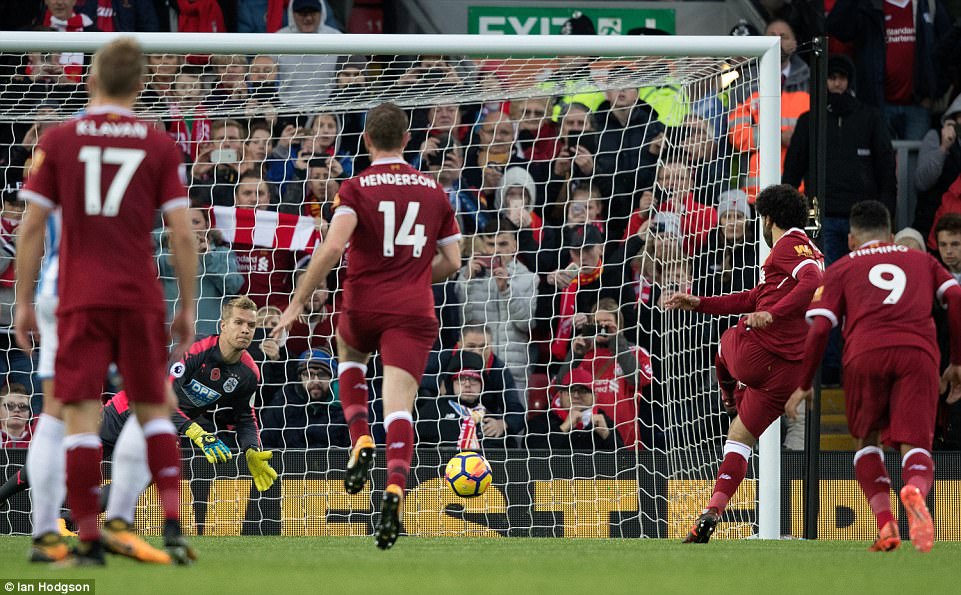 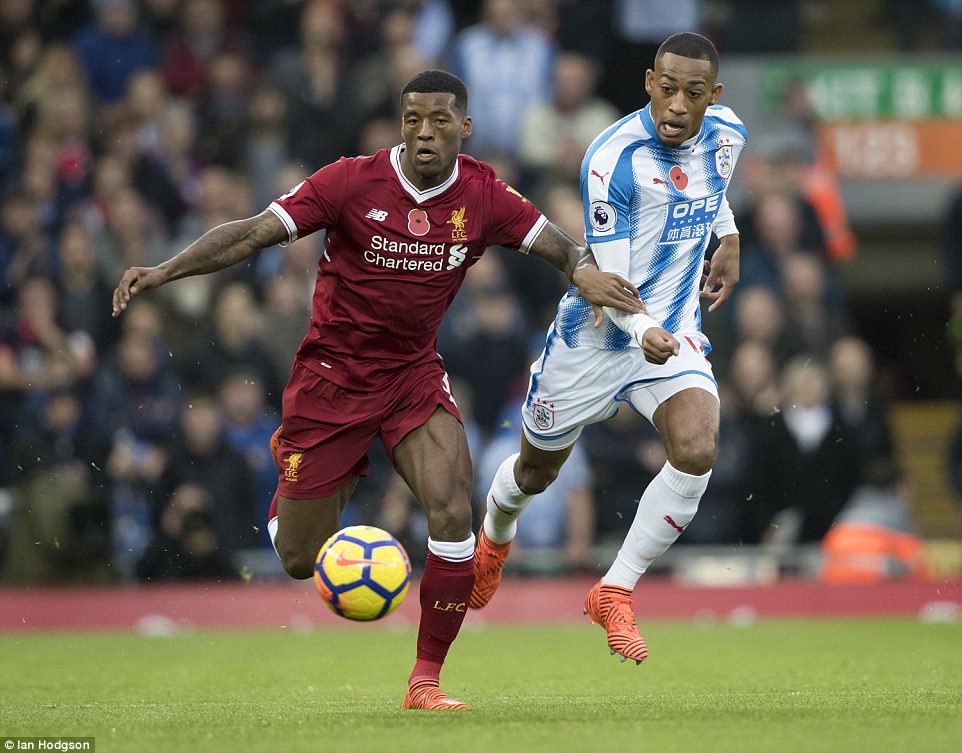 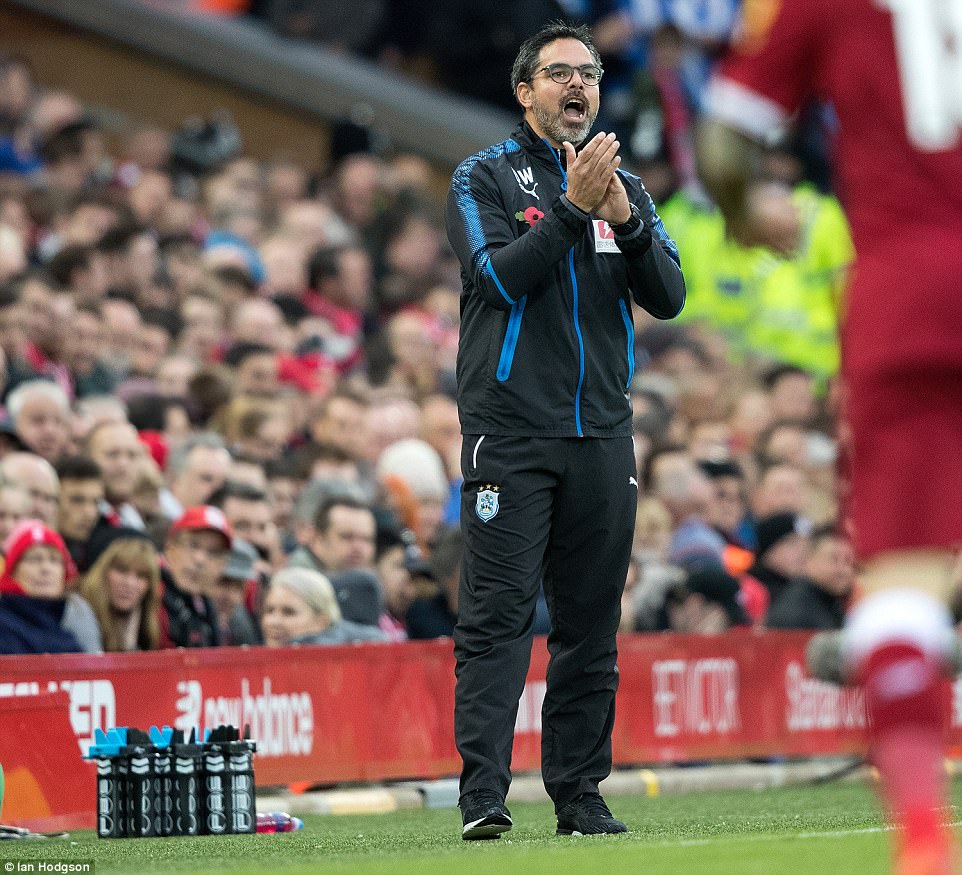 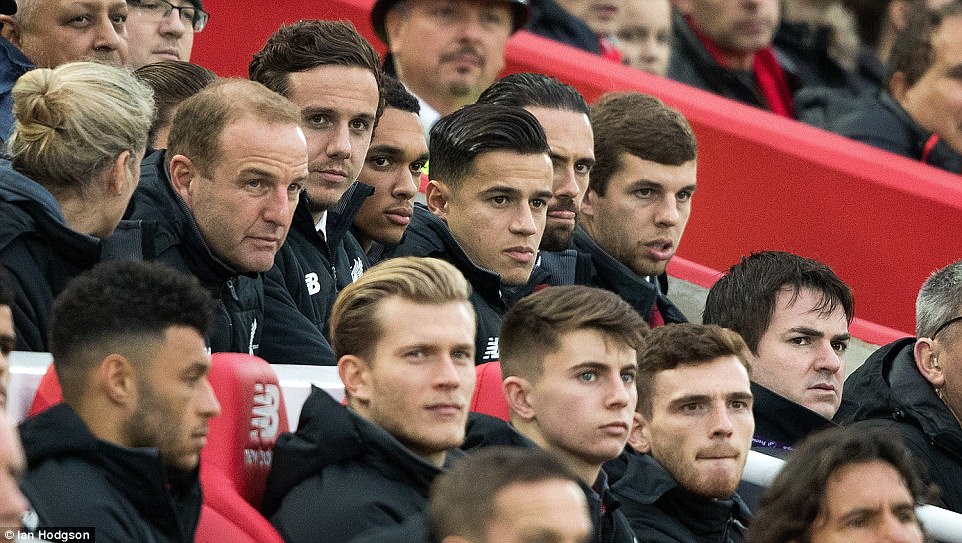 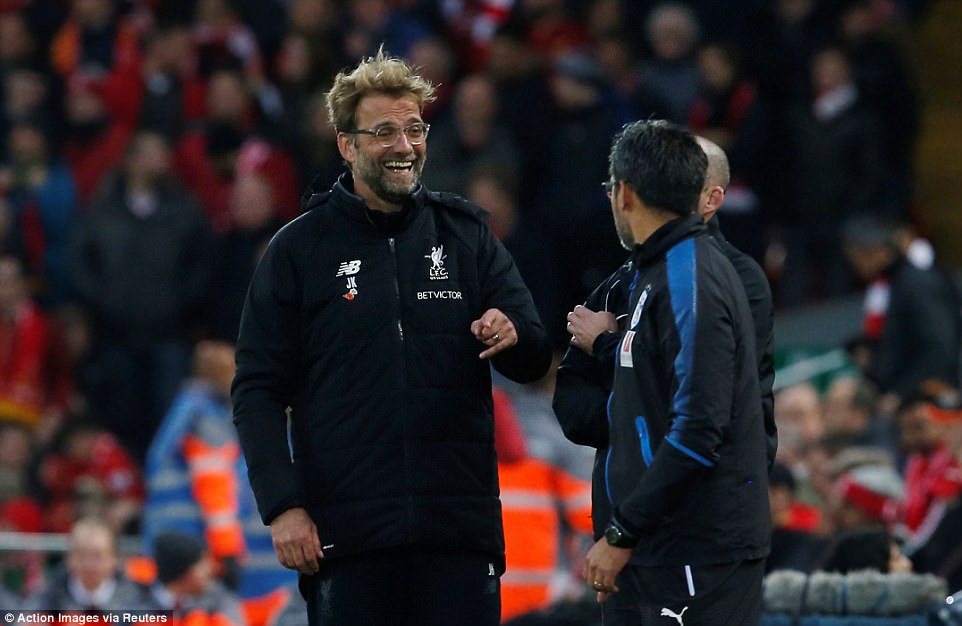 Smith’s mistakes were out of sync with Huddersfield’s defensive display but ultimately they were not adventurous enough.

‘I haven’t seen Anfield as quiet as it was today until we conceded,’ Wagner said. ‘If there was noise it came from our supporters. We neutralised them.

‘We couldn’t punish them on the counter and that comes when you are able to keep a clean sheet longer.’

Worse was to follow just before the hour. Firmino’s movement befuddled Aaron Mooy from a James Milner corner and it was two with Lossl helpless. Certainly a case of the wrong man marking Liverpool’s most potent goalscoring threat. ‘It felt like Christmas,’ Klopp said.

Huddersfield were under siege, Joel Matip twice going close and Salah forcing Lossl into another fine save. The attitude of Klopp’s side was a complete contrast to what Huddersfield faced this time last week. Wijnaldum shimmied and hammered high into Lossl’s net with 15 minutes to play to finish; three and easy for Klopp. Huddersfield, and his great mate, were far too obliging. 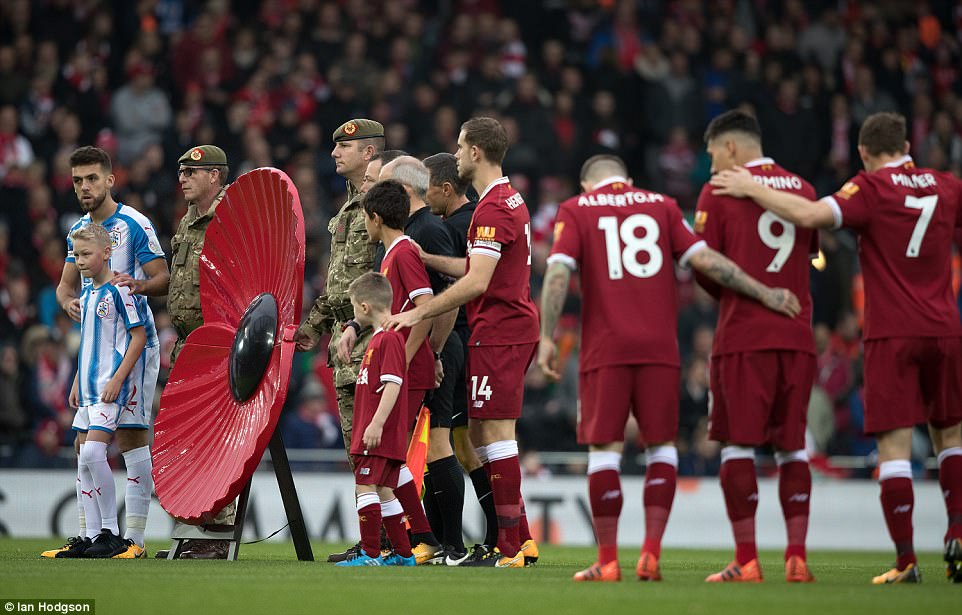 With remembrance day approaching tributes were paid to the armed services prior to kick off, with a large poppy on the field 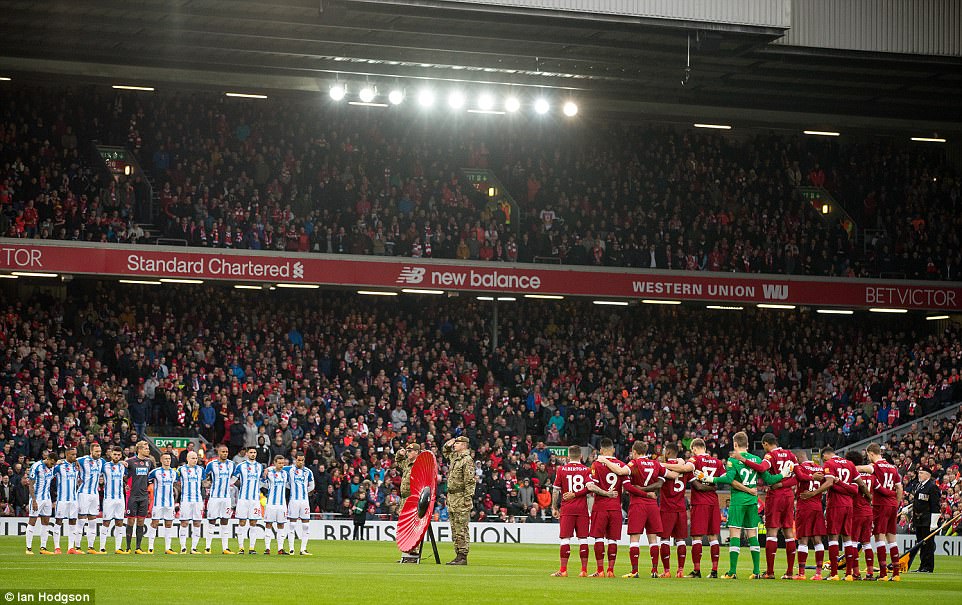