It was dubbed the £20million match back in 2003, now, of course, the prize of reaching the Champions League is worth a whole lot more.

Just a month before the dawn of the Roman Abramovich era, Liverpool travelled to London in a winner-takes-all showdown against Chelsea at Stamford Bridge. 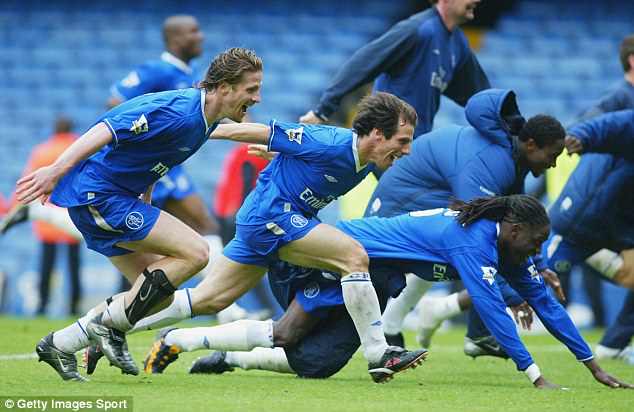 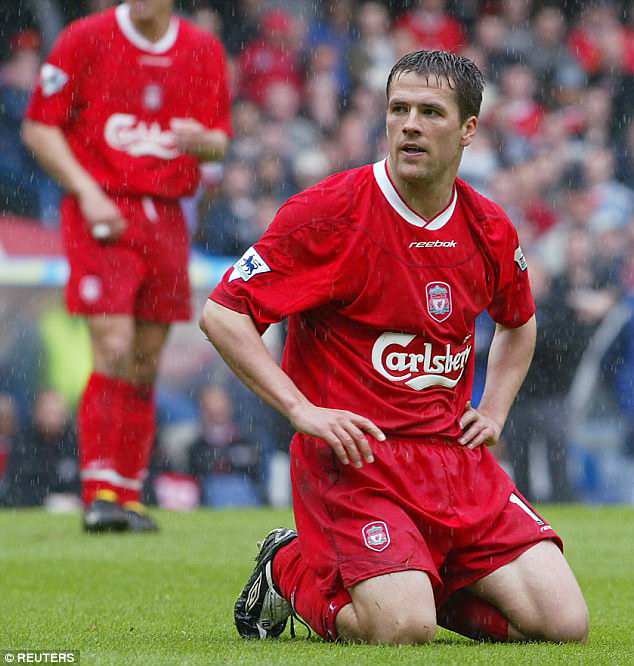 But it was Jesper Gronkjaer who popped up with the decisive goal and, just like that, Liverpool’s lead and hope of Champions League football had vanished.

Gronkjaer’s first-half strike cost Liverpool the match and ultimately consigned them to the consolation prize of a UEFA Cup spot.

The years under Abramovich were laden with star players and yielded Premier League trophies, FA Cups and even a Champions League.

Liverpool’s fortunes have been less kind in the intervening years. This weekend, however, the Reds have a golden opportunity to finally return the favour. 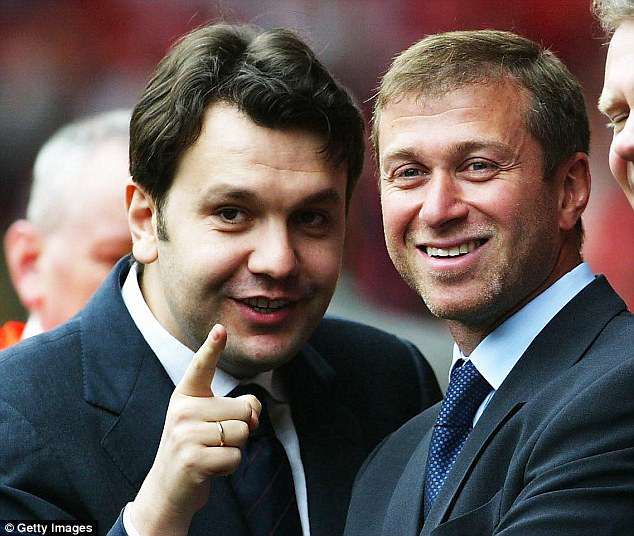 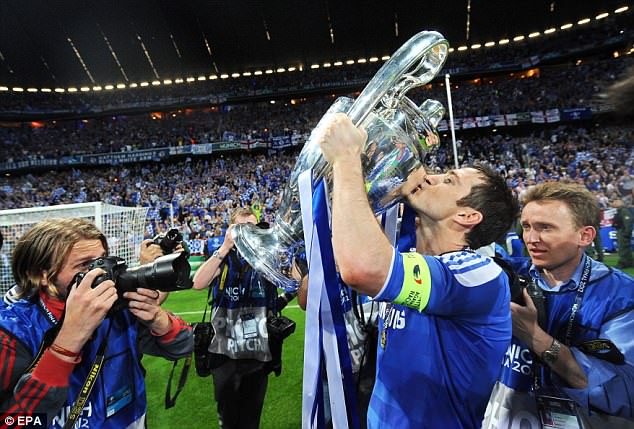 They have on Premier Leagues, FA Cups and even clinched the Champions League in 2012

Chelsea go into the final day of the season in fifth place two points behind their Merseyside rivals and have a far inferior goal difference.

Antonio Conte will be praying that Brighton can travel to Liverpool and come away with all three points, while nothing but a victory against Newcastle will do for his men.

The bad news for Chelsea, however, is Liverpool’s formidable home form. Jurgen Klopp’s side have not dropped a point at Anfield all season, having won 11 of their 18 league matches there.

Couple that with Brighton’s away form, which is the second-worst in the Premier League, then, on paper, it does not make for good reading for the west London outfit.

The Seagulls have also won only twice away from the AMEX Stadium this season, the most recent of which came way back in November against Swansea.

And having met 26 times in their history in all competitions, Brighton have managed only three wins, the last of which came 34 years ago in the FA Cup.

So, as far as the form book goes, the Reds will be quietly confident going into Sunday’s tie. 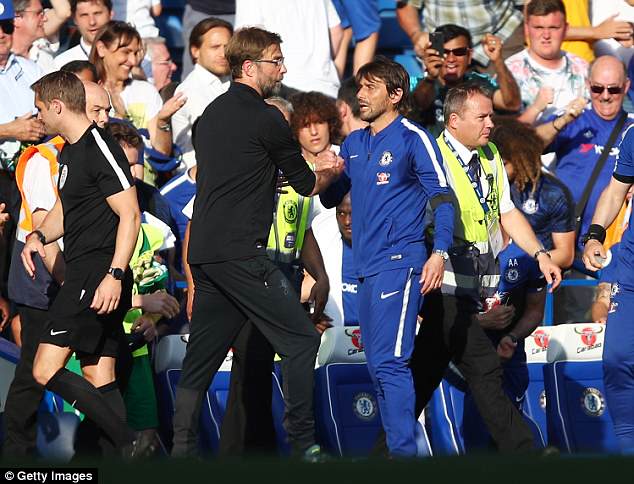 Now, Chelsea go into the final day of the season in fifth, two points behind Merseyside rivals 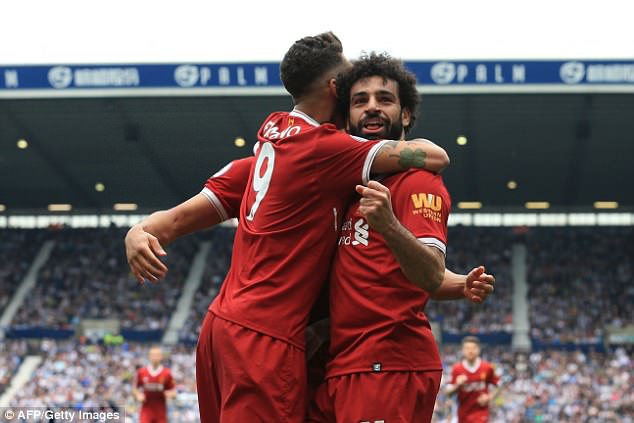 On this season’s form and previous meetings with Brighton, Liverpool will be confident

Liverpool, of course, have another means of retaining their status as a Champions League side when they meet Real Madrid in Kiev for this year’s showpiece later this month.

However, Conte will be focused solely on what his team have control over, and that is Sunday’s meeting with Newcastle.

Chelsea have earned an admirable 33 points away from the Bridge this term and will need to push that tally up to 36 this weekend if they stand any chance of making Europe’s premier competition next season.

One worrying stat for Chelsea is that they’ve not at St James’ Park since December 2011, having visited four times thereafter.

But Chelsea have made a surge of late, having won four of their last five league matches and Conte will undoubtedly throw the proverbial kitchen sink at Rafa Benitez on Sunday, whose side have lost their last four outings, in one last bid to salvage something from an otherwise underwhelming campaign.

With the red half of Merseyside having so much to celebrate on the European stage already this season, they are one positive result away from ensuring they have the chance to do it all again next term. 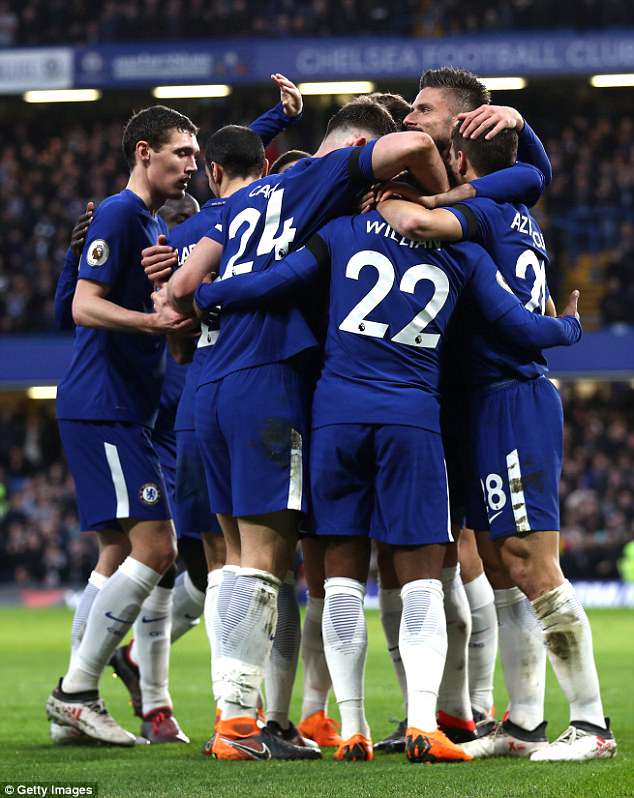 Chelsea have made a surge of late, winning four of their last five Premier League matches