‘A lot of people expected us to slip again but the boys didn’t’: Jurgen Klopp praises his team’s mental strength as they bounce back from poor form to take control of Champions League tie with RB Leipzig

Jurgen Klopp hailed Liverpool’s mentality as his players took a huge step towards the Champions League quarter-finals with a dominant victory over RB Leipzig.

Second half goals from Mohamed Salah and Sadio Mane enabled Liverpool to seize control of this contest and a 2-0 triumph means they are now long odds-on to reach the last eight; it was Liverpool’s most complete performance since before Christmas.

Another defeat in Hungary would have led Liverpool to be engulfed in a crisis and Klopp felt his side’s critics were hoping for them ‘to slip up’ but that possibility was never on the cards as they gave the Bundesliga side the slightest glimmer.

‘I was really pleased with the performance and it led to a deserved win. It was a game that we did not expect big advantages because of the mentality of both teams but I thought we were better for most of the night. I know Leipzig pretty well and I know how overwhelming they can be.

‘That is what we had to deal with and the boys played a really good game. We did well. We are not children anymore and I know people have not been happy with results. The boys deserved the win, I think. We forced them to make mistakes and I am completely happy with the performance.’ 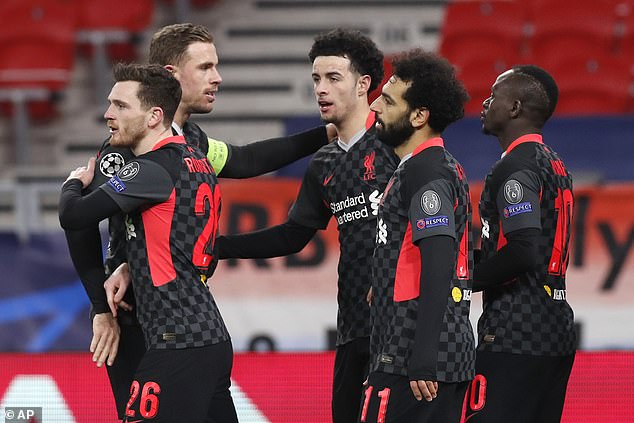 Klopp looked much-more like his old-self on the sidelines and was constantly barking out instructions and encouragement; he was rewarded in the second period when the outstanding Salah and Mane capitalised on defensive errors to give Liverpool a significant buffer for the second leg.

He was also delighted by Liverpool’s defence keeping a clean sheet, which was preserved by two crucial saves from Alisson Becker either side of half-time. The Brazilian has made uncharacteristic errors in recent weeks but this display was more in keeping with his standards.

‘Definitely,’ said Klopp, when asked about Alisson’s improvement. ‘But he had big moments in the Leicester game, eh? But of course a clean sheet helps, as you can imagine. Ali will sleep really well in the plane on the way home! As always, he helped us a lot. 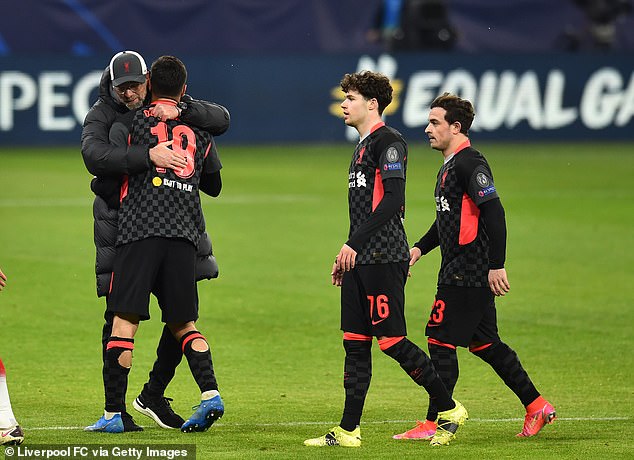 ‘I think that (new signing) Ozan Kabak’s attitude was good. I’m very happy with his performance. And Hendo, he can play this position perfectly. It’s not that Leipzig didn’t have a chance, Ali had to intervene also, but that’s normal.

‘Overall I can say that, the whole package, I’m very pleased with the performance. Whatever they tried, we had an answer. They had chances, but that’s normal. The majority of the time, we had control of the game which was very important, and that doesn’t happen a lot against Leipzig.’

Julian Nagelsmann, Leipzig’s head coach, refused to concede the tie and vowed to attack in the second leg saying: ‘It will not be easy but I think we earned respect. We have to be confident for the second game. We have to win.’