‘There was concrete interest from two or three clubs in January and they will knock again’: Xherdan Shaqiri’s brother and agent insists Liverpool can expect more interest in the out of favour winger this summer

Liverpool should be braced for more interest in attacker Xherdan Shaqiri this summer, according to his brother and agent.

The Swiss international has been on the periphery of Jurgen Klopp’s squad this season due to several injuries that have prevented him from challenging the Reds’ established front three.

Shaqiri was an impressive attacking option in his debut campaign at Anfield last season, helping the team to Champions League success and a second-place finish in the Premier League.

Liverpool should be braced for interest in attacker Xherdan Shaqiri this summer, says his agent

But this season he has been limited to just 10 appearances across all competitions, thanks to various injuries and knocks, while the January arrival of Takumi Minamino has also pushed him down the pecking order.

He has also been linked with a move away from Anfield in recent months and his brother, Erdin, has now claimed Jurgen Klopp should expect more interest in the winger in the coming months.

‘I think there will be many offers for Xherdan in the summer,’ he told Kosovar TV station KTV, but reported by Swiss outlet Blick.

‘Already in January there was concrete interest from two or three clubs. 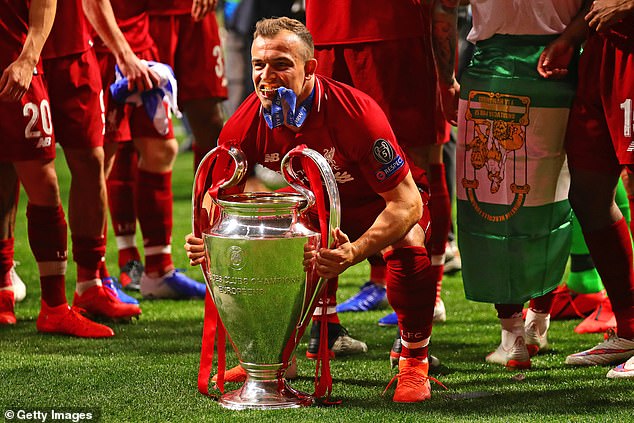 This season he has been limited to just 10 appearances across all competitions, due to injuries

‘These – their names have already been taken up in various media – will knock again.

‘Xherdan’s situation in Liverpool is not easy because of several minor injuries that lasted longer than we thought.

‘Jurgen Klopp is in talks with him about more game practice – we have to wait and see.

‘I think Xherdan deserves a lot more. He was unlucky with his injuries. But every time he could play again, he did his job and changed the game.’

Shaqiri arrived at Anfield in the summer of 2018 for a fee in the region of £13million following Stoke’s relegation from the Premier League.

He has scored seven goals and provided five assists for the Reds in 40 appearances.